We’ve run all three of these cards on the open test bench that consists of the following components.

I’ve run the numbers against the GTX 1080 and the Titan X, all with the very latest March 2017 drivers to give each GPU the fairest crack of the whip.

The games were run at their maximum settings with a healthy dose of anti-aliasing. Some might find the addition of AA controversial, but you’ll always get the best comparisons when pushing cards right to their very limits. I also ran each game at 5K, although here I’ll focus on the 4K results since this is what most people will be expecting. To make the most of the 1080 Ti, we’ve added some benchmarks that represent a couple of more recent games to ensure it’s pushed to its limits. We start with a hit from last year.

DICE’s World War I epic is a great benchmark for high-end GPUs thanks to incredible detail, particle effects and GPU-sapping textures. I ran it at 4K and at 5K, although realistically most people will be maxing out at 4K for the time being.

Battlefield 1 doesn’t have a repeatable built-in benchmark, so the test is run during the on-rails section of the mission “Mud and Blood”.

The GTX 1080 Ti managed an average frame rate of 72fps, which is superb when you consider I’d turned everything to Ultra and whacked up anti-aliasing as well. Tweaking the graphics settings that aren’t as important to you will yield even better results.

It’s almost time to retire Shadow of Mordor from our benchmarking suite. 2014’s adventure epic has an excellent built-in benchmark, but with sequel Shadow of War coming soon, the 1080 Ti benchmark is perhaps its last hurrah.

At 4K and Ultra settings, 86.6fps is another good result, with no noticeable dips in frame rate during the test. Surprisingly for such an old title, Shadow of Mordor was a huge outlier in my tests, generating a 1080 Ti score that was 44% faster than the regular GTX 1080.

One of the toughest tests at high resolutions, Tomb Raider’s beautiful benchmark was where the 1080 Ti came closest to nudging the sub-60fps barrier, with an average score of 61.5fps at maximum settings in 4K. This was 20% faster than the GTX 1080, which is a notable and noticeable improvement.

Drop a few graphics settings, including shadows and anti-aliasing, and you’ll have 70fps plus in Tomb Raider without any issues.

Hitman released its final set of missions last year, but it still has a resource-hogging benchmark that really tests the mettle of GPUs.

In 4K, the GTX 1080 Ti managed an impressive 73.6fps at maximum settings, maintaining a relatively stable frame rate throughout the run. It wasn’t significantly faster than the GTX 1080, though, which put in an average frame rate of 59fps. 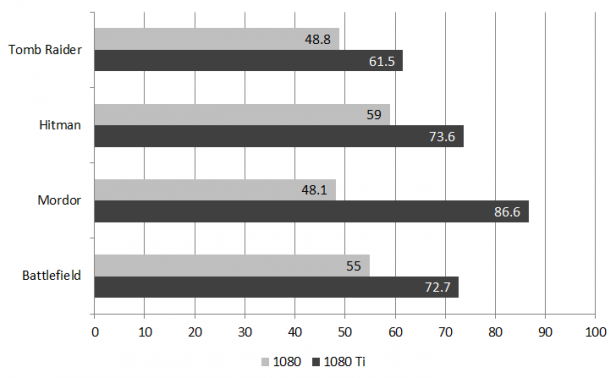 I didn’t have a 980 Ti test with the latest drivers, but our benchmark results from last year point to 1080 Ti  performance that’s between 30% and 50% faster at 4K in Hitman, Tomb Raider and Middle-earth: Shadow of Mordor. 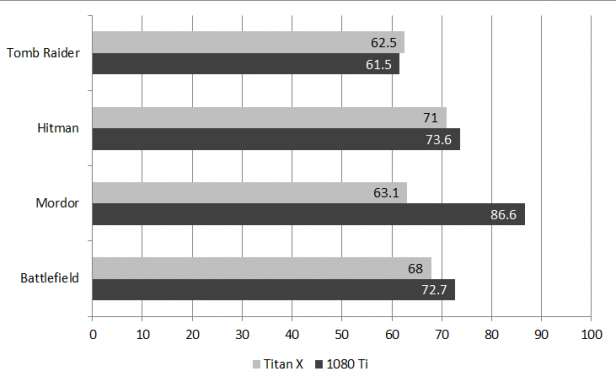 It was the comparison Nvidia made when it launched the 1080 Ti – and it is indeed faster for £300 less. If you own a Titan X, it isn’t exactly a tragedy; you’ve had world-beating performance for a full seven months, so think of it as a Titan Xclusive. Obviously, you’ve no need to upgrade. 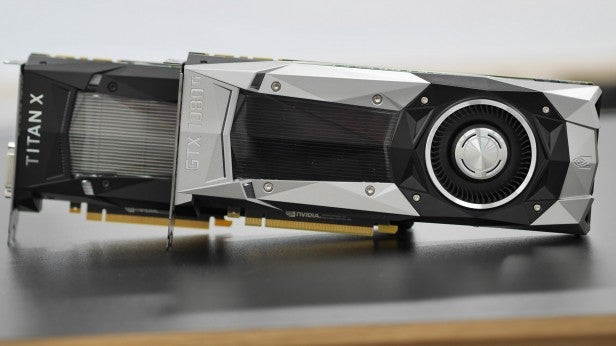 Indeed, peak power draw for the entire TrustedReviews test system without overclocks was 412W, compared to the GTX 1080’s 340W in the same test. If you have a more powerful processor than the one we used, take a look at your power consumption readings to check you won’t over-stretch your PC’s power supply.

Running the Unigine Heaven benchmark on a loop in 4K, the GTX 1080 Ti was able to boost well beyond its stated 1,600MHz clock speed, happily sitting at around 1,800MHz at around 84oC.

Overclocking is as easy as ever, with the GTX 1080 Ti receptive to around 1,950MHz. I was quickly able to get a stable looping Unigine benchmark at 1,950MHz without the GPU throttling back. Temperatures maxed out at around 86oC on the automatic fan profile; I’d probably tweak it so it runs a little louder and cooler. Popping the fan speeds up to 70% reduced the temperature to a more comfortable 77oC. 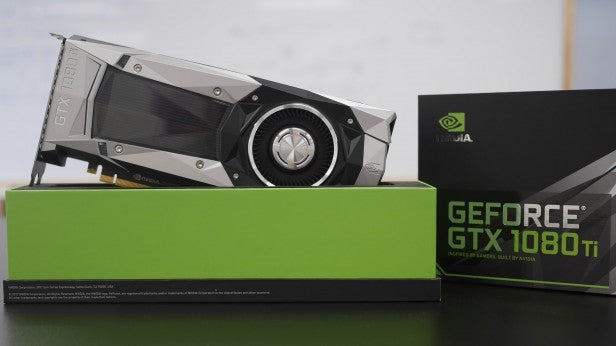 It will be interesting to see whether third-party card manufacturers can encourage the 1080 Ti beyond 2GHz and what sort of cooling will be required in order to achieve such performance.

Memory overclocking was nice and easy: the 11GB of 11GHz GDDR5X memory was happy to receive a boost up to 11.8GHz without instability kicking in.

Nvidia says it has improved the fan design to run slightly quieter, but I didn’t hear a difference – and neither could my decibel meter. At 28,000rpm, both fans put out between 55 and 56dBA of noise, which is perfectly acceptable. In a compact, poorly insulated case with overclocks applied, it will likely become louder, but not significantly.

Buying the most expensive graphics card you can afford has long been a reviewer’s’ trope, but it’s almost always true. The 1080 Ti stretches this advice to its very limits with its super-high price, but with no competition from AMD at this end of the market, Nvidia has reached new performance territory.

However, with 3GB more memory and at least 20% better performance, it’s hard not to recommend the 1080 Ti for those building the best system they possibly can for 4K and multi-screen gaming. 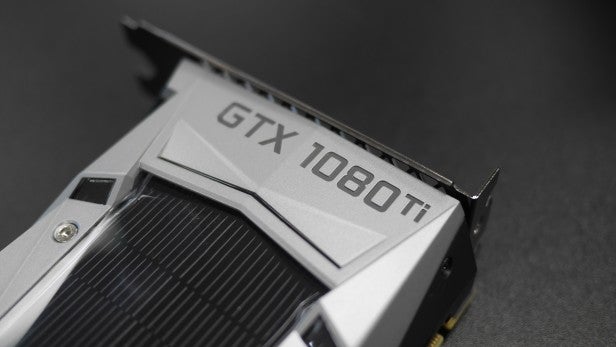 If you’re thinking about a direct upgrade from the 980 Ti, the performance increase is substantial; the 1080 Ti is up to twice as fast. If you have a 1080, your card has a lot of life left in it and it’s probably wise to stick with it for now.

A new performance benchmark – but you pay for it.