This cheap, feature-packed and easy to use smart TV box is great for 4K streaming – but NOW TV itself is still limited to 720p and stereo

What is the NOW TV Smart Box 4K?

The NOW TV Smart Box 4K is the latest media player offered by the Sky subsidiary, and similar to previous boxes from the company, it’s essentially a re-branded Roku device.

This new version adds support for 4K HDR at up to 60p, along with voice search, and a redesigned homepage. There’s also a “Night” mode and a microSD slot, plus over 50 different streaming apps such as Netflix, YouTube and all the UK TV catch-up services.

The main reason for buying this particular box is to gain access to NOW TV, a contract-free subscription streaming service offered by Sky. You pay a daily, weekly, or monthly fee to get access to the broadcaster’s content, without having to install a satellite dish or commit to a long-term contract.

The only real catch is that different passes are available, depending on what you want to watch: Entertainment, Sky Cinema, Sky Sports, Kids, and Hayu.

The NOW TV Smart Box 4K looks exactly like the company’s previous boxes – and, once again, the hardware and processing is supplied by Roku.

The design is simple but elegant, with the box finished in a glossy black plastic, and a NOW TV logo on the top in bright pink lettering – it’s fairly eye-catching. There’s a small white LED at the front of the unit that lights up when the box is in use; it turns off when it’s in standby. 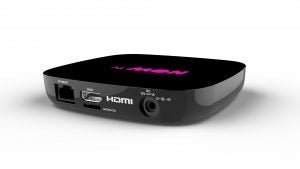 All the connections are at the rear of the unit, where you’ll find an HDMI 2.0 output with HDCP 2.2. This is a big deal, because previous NOW TV boxes were limited to 1080p. This new one can support 4K HDR at up to 60p.

In addition, there’s a microSD slot, and a connector for the AC/DC power adapter. The box includes built-in Wi-Fi (802.11 b/g/n compatible), but if you’d rather use a wired connection then there’s an Ethernet port too.

The included remote is a simple but effective controller that has all the buttons you’ll need to set up and operate the box. It’s comfortable to hold, and easy to operate one-handed.

There are navigation and playback controls, along with a home button and a new voice search. There are direct access buttons for My TV, TV Guide, Kids Pass, and the Sky Store. You can also use the remote to turn your TV on and off and control the volume.

The NOW TV Smart Box 4K is super-easy to set up: simply connect it to your TV via HDMI (there’s a cable included), and plug the unit in using the provided AC/DC power adapter. You’ll need an internet connection (wireless or wired) and a laptop or smartphone – but, otherwise, it’s simply a case of following the on-screen instructions.

The box automatically updated a number apps, and also allowed me to sign into my NOW TV account (if you don’t have one, you can create one). 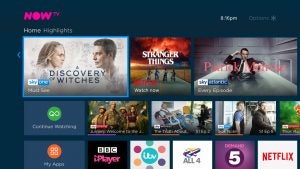 Once set up, operating the box is straightforward. The re-designed homepage allows for quick and easy access to the various apps and other content, and the operating system was both effective and responsive.

You can navigate the image-led homepage and apps using the remote control, while the voice search feature proved extremely useful. It understood my instructions, allowing me to quickly search for films, TV shows, or specific actors in a highly intuitive and interactive manner.

The NOW TV Box 4K offers access to more than 50 different apps including Netflix, YouTube, and all the UK TV catch-up services. You can find a complete list here.

However, the main reason for picking up the box is to access Sky content via a streaming service rather than satellite. The benefits are obvious: it’s cheaper, more flexible (no long-term contracts), and you don’t need a dish attached to the side of your house. 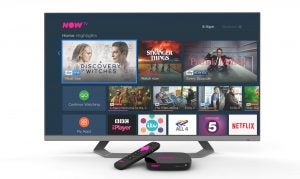 The different NOW TV packages or passes mirror those offered by Sky’s TV service, with five to choose from: Entertainment, Sky Cinema, Sky Sports, Kids and Hayu. These various passes include live channels and access to a selection of catch-up content and box sets.

The prices vary, but NOW TV is definitely the cheapest way of accessing Sky Sports on a monthly basis. You can find a list of the various passes and the latest deals here.

Depending on the passes you choose, there’s plenty of Sky content available. In the case of the Sky Sports pass, you could reduce the cost by going for daily or weekly passes instead – depending on how much sport you actually watch.

Overall, it’s a simple and cost-effective method of accessing Sky content; my only complaint would be that you can’t combine passes to reduce the costs further.

The NOW TV Box 4K supports the 4K Ultra HD resolution at frame rates up to 60p, and will automatically select the optimal output according to the capabilities of your TV. It also supports High Dynamic Range, specifically HDR10, but it doesn’t support Dolby Vision used by Netflix. 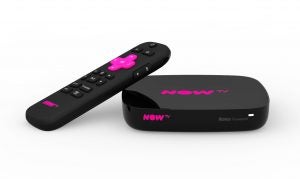 There’s a Night mode that reduces loud noises such as explosions, thus allowing you to enjoy your favourite blockbuster movies without disturbing the rest of the household in the evenings.

The box performed extremely well, proving responsive and effective in terms of navigating the apps and streaming content when using them. I had no issues with the box, and was able to navigate the updated homepage with ease.

Playback of the various streaming services was effective, and I was also pleased to see that you can still pause and rewind live TV by up to 30 minutes.

In terms of the third-party apps, you can watch in higher resolutions such as 4K with Netflix and YouTube, and Full HD in the case of BBC iPlayer, ITV Hub, All 4 and Demand 5.

Ironically, the least impressive streaming service from a technical standpoint is the main reason for actually buying this box. The NOW TV app is still limited to 720p resolution and stereo sound, which is disappointing when you have services such as Netflix offering 4K with Dolby Vision and Atmos.

Sky has promised an upgrade to NOW TV to 1080p by the end of this year, but time is running out and the company has yet to confirm if there will be an additional cost for the higher resolution service.

The NOW TV Smart Box 4K is certainly cheap, but technical limitations mean there are better performing options out there.

Given that the box is actually made for NOW TV by Roku, the obvious alternative is that company’s Streaming Stick+. It’s more expensive at £70, but it offers better features and includes more apps such as Amazon Video.

The NOW TV 4K smart box is cheap, featured-packed and easy to use thanks to Roku. There’s voice control, a microSD slot, and over 50 apps that include UK catch-up TV and video streaming services with support for 4K/60p.

The lack of Dolby Atmos and Vision support is disappointing, as is the lack of Amazon Video, but the biggest let-down is NOW TV itself. The streaming service is still limited to 720p and stereo sound, although an upgrade to 1080p is apparently in the works.

This cheap, feature-packed and easy to use smart TV box is great for 4K streaming – but NOW TV itself is still limited to 720p and stereo.