Review Update 03/11/2014: Not much has changed for the Lumia 735 since we first reviewed it, but if you’re considering buying one it’s worth knowing about the forthcoming Lumia Denim software update. It was announced with great fanfare in September and Microsoft originally planned to release it this year, but it now looks like it will arrive some time in early 2015. It’s a shame it’s taken so long, but Lumia Denim should address some of our criticisms of the Lumia 735 and make it an even better phone.

The main new features concern the camera and the camera software, namely a new camera app. It adds one simple but much requested feature, HDR photo capture. Microsoft’s system works a bit differently, though, and is dubbed Rich Capture. When enabled, Rich Capture automatically takes HDR photos and captures multiple versions of the scene, using different levels of exposure for each shot and then merging them. The clever bit comes afterwards as you can select the ideal image from these multiple exposures using a simple slider. If it works as well as it looks like it does, it should make the camera experience on the Lumia 735 even better.

Rich Capture becomes even smarter when flash is enabled in dark conditions. In this situation Rich Capture captures multiple shots with and without flash, which you can then merge and adjust using a slider to get the perfect low light exposure. The new camera app will also bring an improved burst mode and should make the camera app slightly faster. All told, if it delivers on all these promises then it will be a serious upgrade to the Lumia 735.

The Lumia 735, which of course runs Windows Phone, is pitched as the ultimate selfie phone thanks to an ultra-wide, 5-megapixel front-facing camera. But it’s also a capable, 4.7-inch mid-range smartphone that includes 4G, NFC and even supports wireless charging with additional accessories. It has some wrinkles, but it’s free on contracts from £18 a month or £190 SIM-free, making it a decent value option if you fancy something different from the Android rivals like the Moto G 2 or Sony Xperia M2. 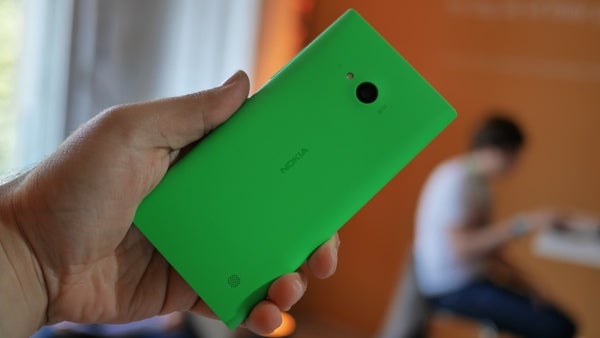 The Lumia 735 sticks to the standard Lumia formula: it’s plastic and it’s colourful. We’ve seen the green and orange versions, which are bold, striking shades with a glossy sheen. There are white and black versions, too, but of the four we’d pick the green. The orange is a little too garish, while the black and white are just a tad dull.

We like the design, though. The smooth, curved shape is comfortable and the Lumia 735 has an unfussy quality that instantly endears itself. The only thing we’d change is the location of the power/standby button on the right edge — it’s about halfway down and a real pain if you use your phone in a cradle when driving.

Like most phones this price, the rear is removable and the battery is user replaceable. There’s a microSD card slot in there as well, so you can expand the 8GB built-in storage. This removable rear comes with one small complaint, though, as the case creaks a little when held tight or pressured at specific points. This gives it a slightly cheap feel, though the actual build quality is good — we dropped our Lumia 735 a couple of times with no ill effects, not even a scratch. 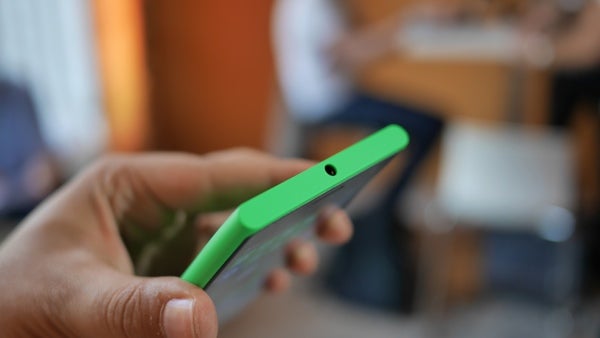 Another benefit to the removable rear is that you can buy an optional Wireless Charging Shell and Nokia Wireless Charging Plate. Both are still listed as ‘coming soon’ but they’re neat options to have, even if they cost extra. Likewise, the Lumia 735 is unique among phones this price in including NFC.

In theory this allows for wireless payments, though in practice you’ll use it more for speeding up pairing with NFC equipped Bluetooth devices. That includes another upcoming accessory, the Microsoft Screen Sharing tool, which will let you beam your phone’s screen to a TV wirelessly using NFC to pair.

All of which means the Lumia 735 is a feature-packed phone for the price. They’re not all the kind of features you’ll use all the time, if at all if you don’t buy the accessories, but few phones this price can match it in this regard.

The Lumia 735 is powered by a 1.2GHz Snapdragon 400 processor, has 1GB RAM and includes the usual niceties such as Bluetooth 4.0, GPS and 802.11n Wi-Fi. There’s even an FM radio, a feature we don’t see often anymore. The cameras are 6.7-megapixels at the rear and 5-megapixels on the front, which means the rear one is unusually high and the front one is unusually low. We’ll get onto those in detail a bit later. 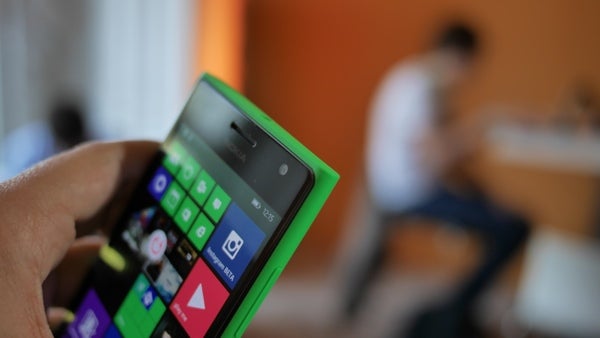 First, though, the Lumia 735’s screen. It’s a 4.7-inch, AMOLED screen with a 1,280 x 720 resolution and it’s much like most AMOLED screens you’ll have seen, particularly among cheaper phones. Blacks are completely black, but colours — while rich — are overstated.

This combination means photos and videos look rich, deep and full of contrast, but also unrealistic. Skins tones have a ruddy, tanned complexion that’s out of character, something we noticed most when viewing photos taken on the phone than in online videos and films. We also found the screen tends to ‘crush’ the dark parts of videos so that, in one example, someone wearing a dark shirt seemed to merge into the dark background. 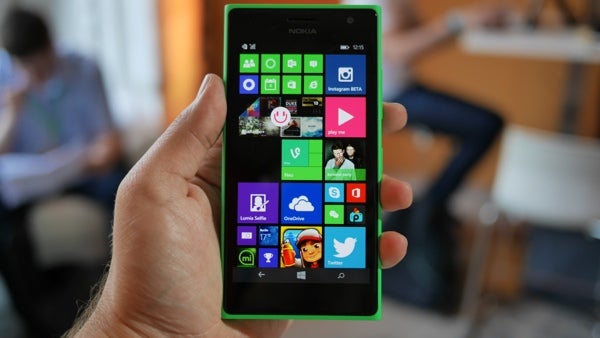 The other issue is that the Lumia 735’s screen doesn’t look as sharp as its 1,280 x 720 resolution suggests. Despite squeezing in 316 pixels per inch (ppi), only slightly less than the 326ppi of the new iPhone 6, it has a slightly grainy, pixellated quality. This is down to the way the sub-pixels are arranged (referred to as PenTile), which means the screen falls short of Moto G and Moto G 2 whose 720p LCD screen look sharper.

These issues make the screen sound worse than it really is, though. Yes, colours are too much sometimes, but some people will like the punchy, contrasty look — it certainly works well with Windows Phone’s standard dark and colourful interface. Moreover, the most recent Lumia firmware update lets you tweak the colour settings, so you can tone down the colours somewhat. On balance, it’s a better screen than on the Sony Xperia M2 (960 x 540, 229ppi), it’s just not as good as the Moto G 2’s sharper, LCD display.

It also works well when outdoors. Again, it’s not quite as bright as the Moto G 2’s LCD screen, but it handles bright sunlight well and remains useable and the auto brightness system does a good job picking the right setting for the conditions.