The Nokia 8.3 5G is a competent mid-range phone that gets pretty much all the basics right. The only downside is that it targets a very busy space in the market full of handsets with more developed feature sets, like the Pixel 5 and Xiaomi Mi 10T Pro.

The Nokia 8.3 5G is HMD Global’s first attempt at an affordable 5G phone. It targets the same busy space as the Pixel 5 and Xiaomi Mi 10T Pro.

As a piece of hardware it doesn’t have all the next generation bells and whistles seen on its competitors.

But, by getting nearly all the basics right and offering the blissfully bloatware free Android One experience, it remains a solid choice for any buyer on the budget looking for a 5G phone. 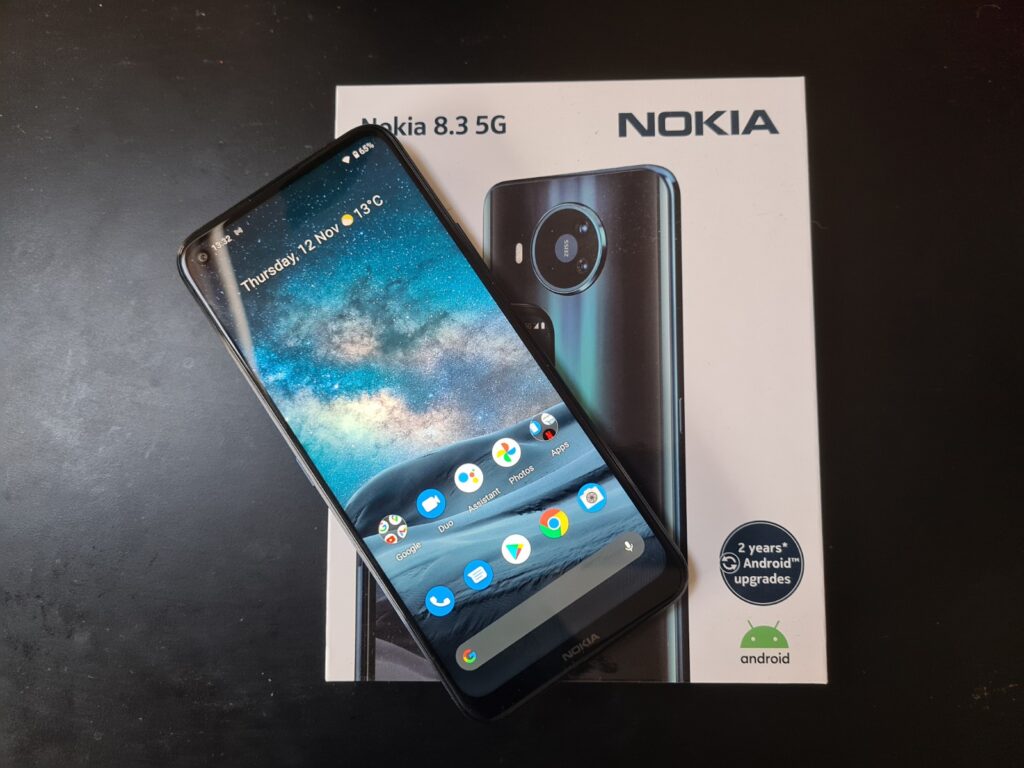 Nokia execs’ used to joke that if you dropped one of their phones, it’s the floor that’ll come off worse. The Nokia 8.3 5G follows this strategy when it comes to design.

It’s a chunky, well built lump of a phone that’s noticeably larger and heavier than most current gen’ handsets measuring in at 171.9 x 78.6 x 9 mm and weighing 220g. The plastic, shiny back also gives it a distinct mid-range. Think Galaxy S20 FE, rather than flagship Galaxy S20 Ultra.

However, the heft makes it feel reassuringly solid, and having survived an accidental encounter with the kitchen flaw I can confirm it is very well built. As an added bonus, unlike many phones at this price it also has a formal IP 52 water resistance rating. This isn’t quite as good as an IP 68 rating, but it does add some protection from sprays of water.

The only downside to the phone’s heft is that, like the Moto G9 Plus and Xiaomi Mi 10T Pro, it can feel a little unwieldy to use one handed, especially if you’re a southpaw. This is in part due to its sheer size, but also because of its physical button placement.

Like its rivals, the Nokia places its power and volume controls on the phone’s right hand side. The positioning is intended to lie where a right handed person’s thumb would naturally fall, but for left handed people it’s an outright pain. This is especially true if you want to use the power buttons inbuilt fingerprint scanner.

Outside of this, it ticks all the right boxes when it comes to functionality, coming with either 64GB or 128GB of storage, a USB-C charge input and 3.5mm headphone input for any audiophile or wireless hold out still using a cabled set of cans. 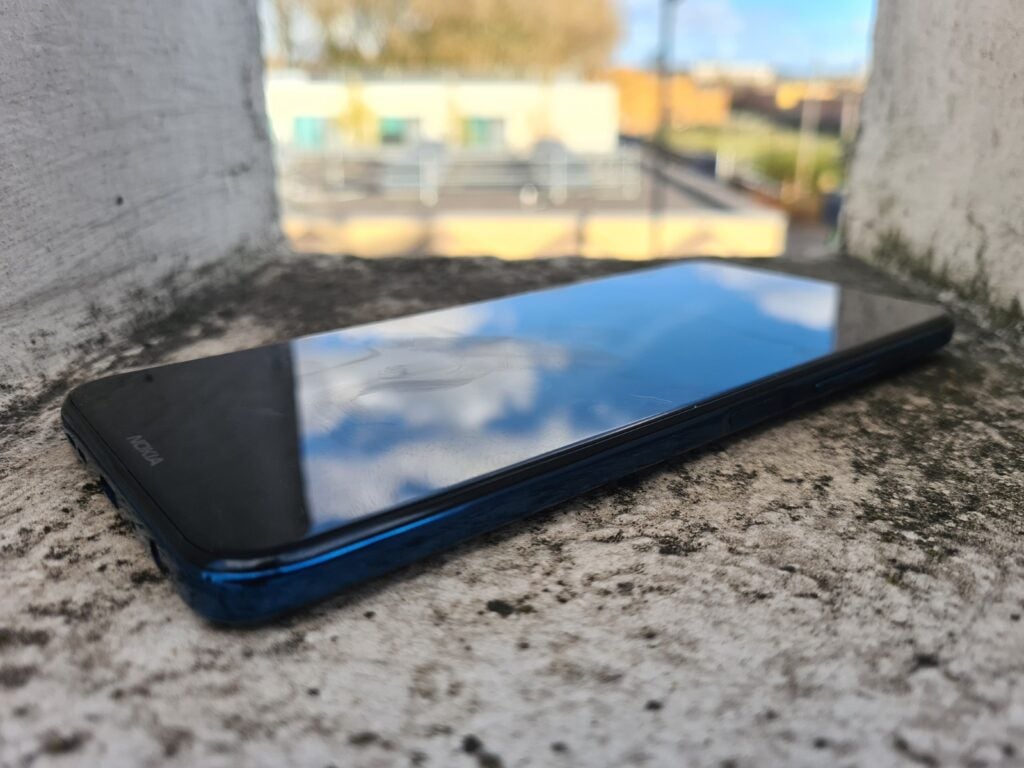 The Nokia 8.3 5G has a good screen, but it’s missing a key feature

The Nokia 8.3 5G’s screen is generally good, outside of one key omission – it doesn’t have a high refresh rate screen.

For those out of the know, traditionally most phone screens are locked to 60Hz. This means no matter what you’re doing the phone will render 60 images per second. However, recently phones have started hitting the market with higher refresh rate panels that can go as high as 90Hz, 120Hz and in some instances 144Hz. This has a few benefits, chief of which is making the display generally feel smoother to use and more responsive.

A few years ago the Nokia 8.3’s standard 60Hz rating would have been fine, but with key phones including the Pixel 5, Galaxy S20 FE, Moto G 5G Plus and Xiaomi Mi 10T Pro all featuring the tech it feels like an odd omission.

Thankfully outside of this the screen is perfectly serviceable. Measuring in at 6.81-inches big it’s more than spacious enough for regular use, movie watching and gaming. The 1080 x 2400 resolution isn’t the sharpest you’ll find this price, but honestly you’ll struggle to spot individual pixels.

IPS panels never offer the wonderful deep immersive blacks of their OLED rivals, but the Nokia 8.3’s screen has a nice neutral, natural tone, which is a welcome change to the overcooked warm displays I see on most phones this price.

Max brightness levels aren’t the best around, but they’re high enough to make sure the phone screen remains legible in everything but the brightest sunlight. 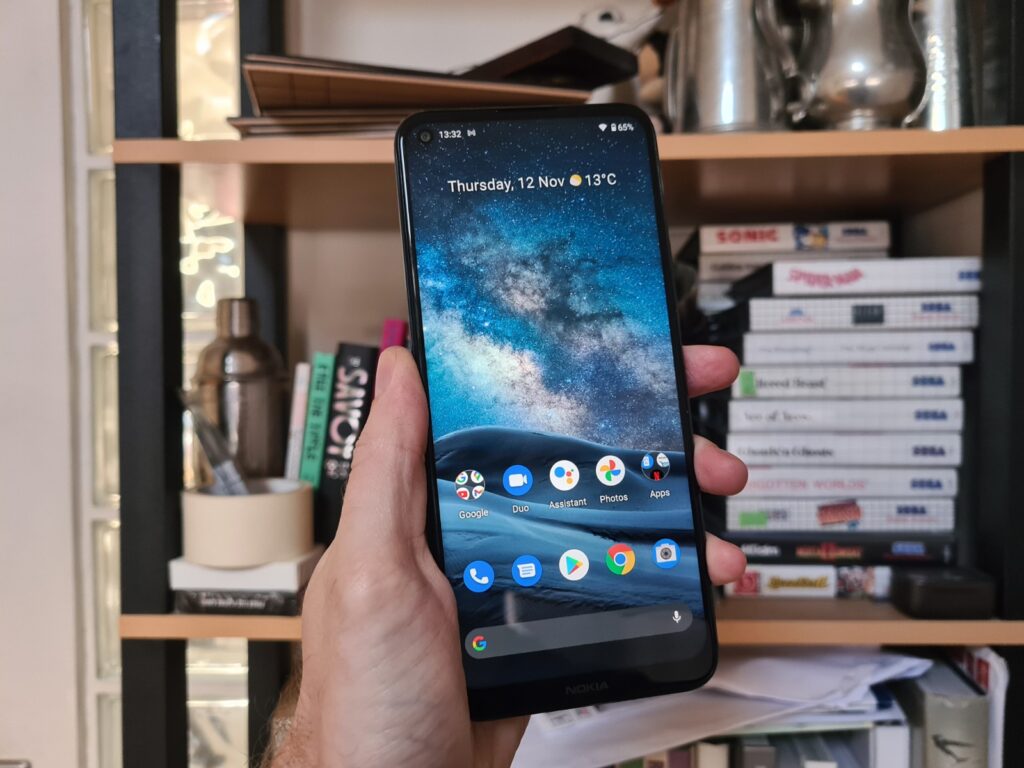 The Nokia 8.3 5G has the best software outside of Pixels

If, like us at Trusted Towers, you’re a fan of unadulterated, pristine clean Android installs then the Nokia 8.3 5G is a top phone. The 8.3 5G is one of a select few phones to come out this year as part of the Android One programme.

This comes with two key benefits. First, the phone’s software is untouched, meaning its completely free of bloatware, duplicate apps and UI changes. Second, because it ensures the phone will receive updates to newer versions of Android year-on-year, a key factor most companies struggle to deliver on at this price.

As a result, outside of Google’s Pixel line or Motorola’s One series, you’ll struggle to find a handset with cleaner, more future proof software than the Nokia 8.3 5G at the moment.

The Nokia 8.3 5G runs using Qualcomm’s mid-tier Snapdragon 765G chip. The chip’s backed up by either 6GB of 8GB of RAM (tested) depending on which storage option you pick.

Spec fanatics will likely sniff at the absence of an 8-series chip but, as we noted in our Pixel 5 review, the 765G is a perfectly competent piece of silicon that is more than powerful enough for most users. It’s also a lot less demanding on a phone’s battery.

With regular use I found the Nokia 8.3 5G zips through everyday tasks. Multi-tab web browsing is smooth and the phone runs game streaming services, like GeForce Now with zero issues. Local games like CoD Mobile and PUBG also run fine, though I tended to dial down their graphics settings to remain the occasional delay in loading times.

The chip’s 5G connectivity will also be a boon for early adopters of the new tech. 5G’s a new networking standard/technology that’s rapidly rolling out across the UK and other territories. It offers huge increases in data speeds compared to 4G that let you do things like stream video in 4K and download entire TV series in minutes. Or at least that’s the idea.

The phone’s synthetic benchmark scores mirrored my real world findings. Testing the phone with Geekbench 4, which stress tests the CPU to give a rough gauge of overall performance the Nokia 8.3 5G ran in with 571 single-core and 1543 multi-core scores. These scores are par for the course for a phone running the 765G chipset. The Pixel 5, which uses the same chip, scored 600 single and 1623 multi in the same test. 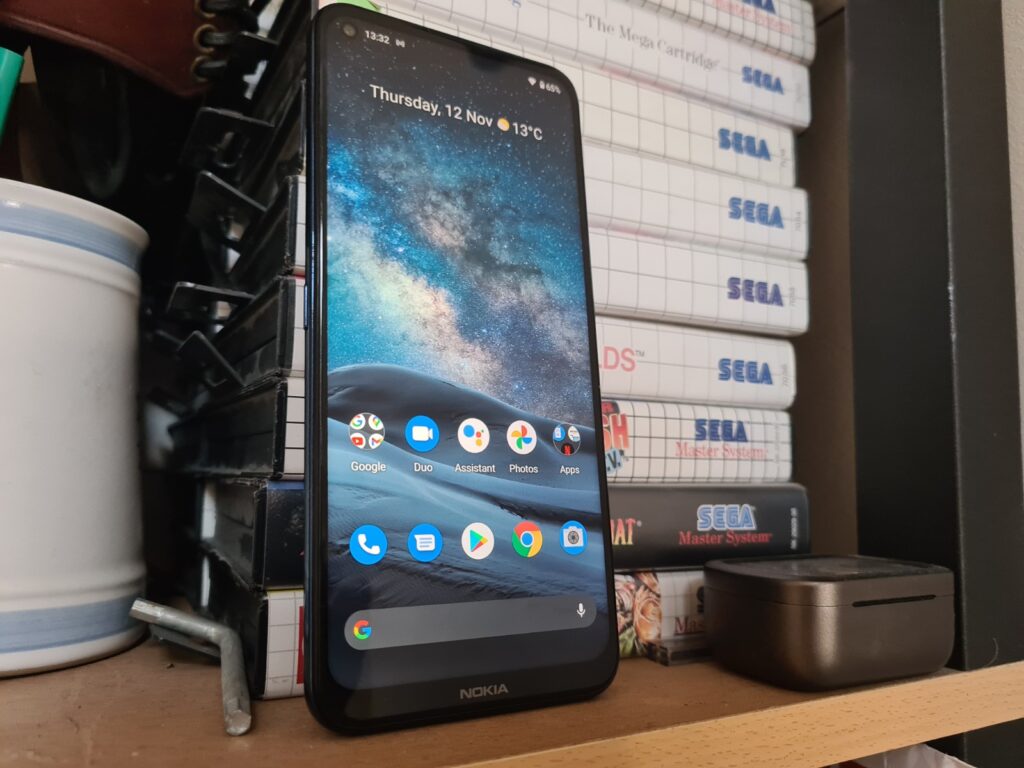 The one area most mid-range phones, outside of Pixels, struggle to compete with true flagships is camera tech. This remains the case with the Nokia 8.3 5G, which offers passable, but fairly by the numbers camera performance.

The phone comes loaded with a quad-sensor rear camera that combines 64MP wide, 12 MP, ultrawide, MP, macro and 2 MP depth parts. As is the case on most phones at this price, the latter two sensors are fairly useless and don’t have any real impact on image quality if you use the out of the box settings.

The auto mode is capable of taking decent photos for use on social media. Images are generally sharp and the camera app/shutter speeds and auto focus are nice and snappy. Images also don’t feel massively over-processed, which is a common problem on most phones at this price. But colours and dynamic range aren’t on a par with what you’ll get on a Pixel 5 and generally can look a little dull compared to some competitors.

Portrait shots, where the phone uses the multiple sensors to detect depth and add a bokeh effect, also aren’t the cleanest you’ll find at this price. Though they look fine on screen, blown up you’ll see some boundary issues where the subject and background are blurred. A bokeh effect is where the main subject of a photo is sharp, but the background is blurred.

Night time photography tells a similar story. Though it is possible to take usable snaps in low light, if you have steady hands, motion blur creeps in with even the slightest movement. Noise is also prone to creeping in and generally you won’t get the same quality shot as you would using a Pixel 5.

The 24 MP front camera tells a similar story. It’s more than good enough for taking selfies in the daylight and video calls, but low light performance isn’t anything to write home about.

You can see a selection of photos taken on the Nokia 8.3 5G below. 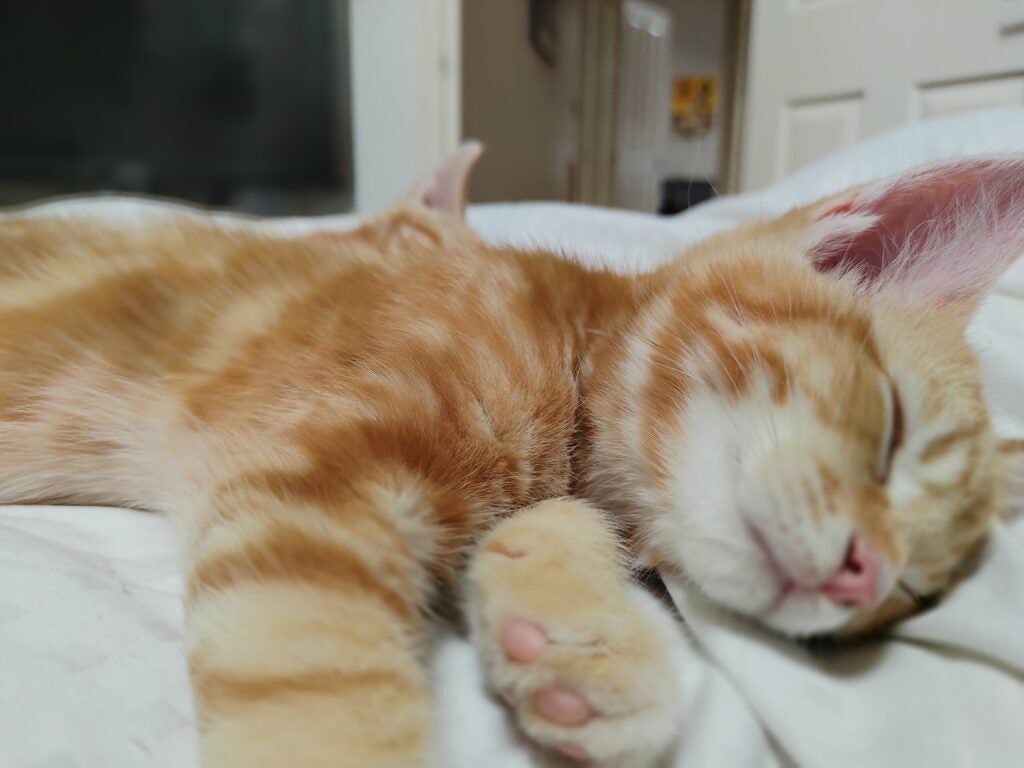 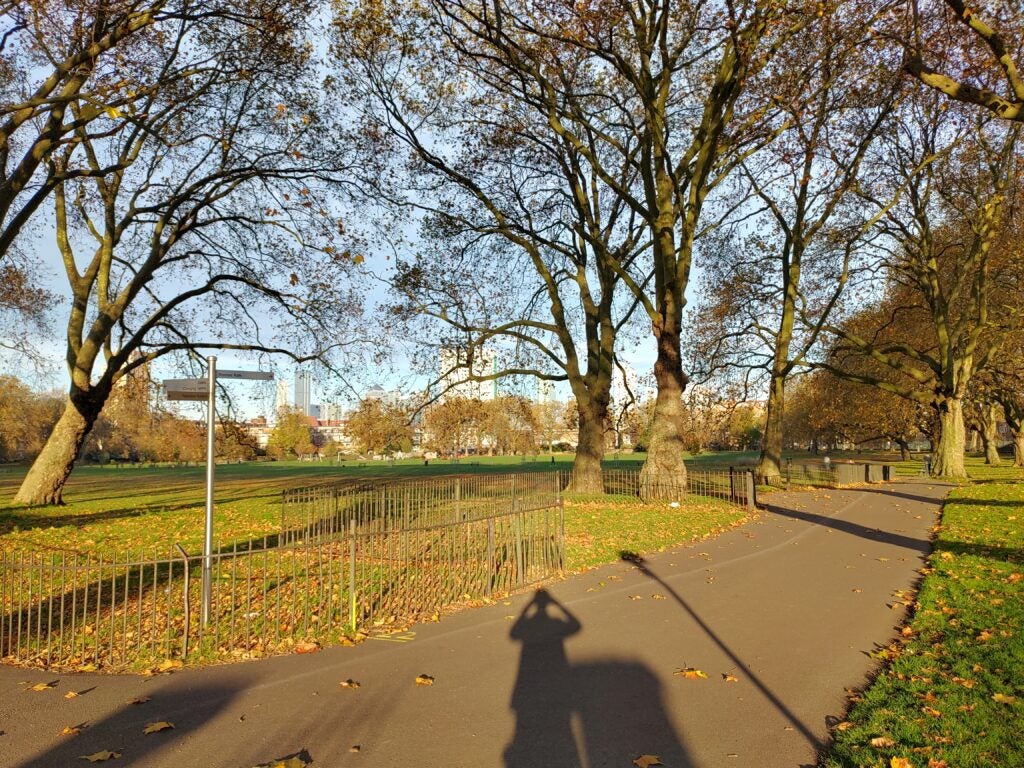 The Nokia 8.3 5G is powered by a 4500mAh battery and features 18W fast charging. With every day use it offers solid stamina. Using it as my main work and personal phone I universally managed to eke out around two day’s use before having to reach for the charger.

This entailed sporadically browsing the web, regularly checking my social media and incoming messages, watching a few Youtube videos, a few hours music listening and half an hour on GeForce Now before bed. The decent stamina is likely largely down to its clean software and basic 60Hz refresh rate screen. A higher refresh rate puts a bigger drain on a phone’s battery as it forces it to show more images per second.

However, intensive tasks hit it fairly hard. Watching video with the screen set to 150 nits, the brightness most people will find comfortable, on Wi-Fi the Nokia 8.3 5G discharged an average of 10% charge per hour, which is a little higher than normal.

Gaming puts an even bigger drain on the battery. Play PUBG the phone lost an average of 14% of its charge per hour.

Charge speeds are reasonably good with the phone generally taking just over an hour to go from 0-100% using the in box charger.

If you value unskinned Android with the assurance of regular software updates and don’t care about having the flashiest phone around then the Nokia 8.3 5G is a solid option.

It’s built to last both from a hardware and software front and comes with all the bells and whistles most people will need.

But, at this price it has some pretty stiff competition. The Xiaomi Mi 10T Pro and Pixel 5 all have equivalent feature sets but come with the added perk of high refresh rate screens, despite costing a bit more. The Pixel 5 also has an incrementally better camera.

If you want to spend a little less the Moto G Plus 5G has nearly all the same perks plus a few additional benefits, like a 90Hz screen. This makes the Nokia a good, but not best in class option.