At launch, the much-hyped space exploration game No Man’s Sky was full of broken promises and lost potential. Hello Games and its relatively small development team were swept up in a whirlwind of hype they simply couldn’t control.

Despite boasting a gorgeous aesthetic and a beautifully lonely atmosphere, the game was hollow and vapid and didn’t reflect what the initial concept promised: the universe was endless, but your capabilities within it were anything but.

Now, No Man’s Sky makes a triumphant return with the NEXT update, boasting so many changes that, at times, it comes across as a fully-fledged sequel. While some of the irritable niggles still remain, the labour of love on display here is undeniable. Hello Games has tumbled through insurmountable obstacles to finally produce one of the greatest space exploration experiences available. 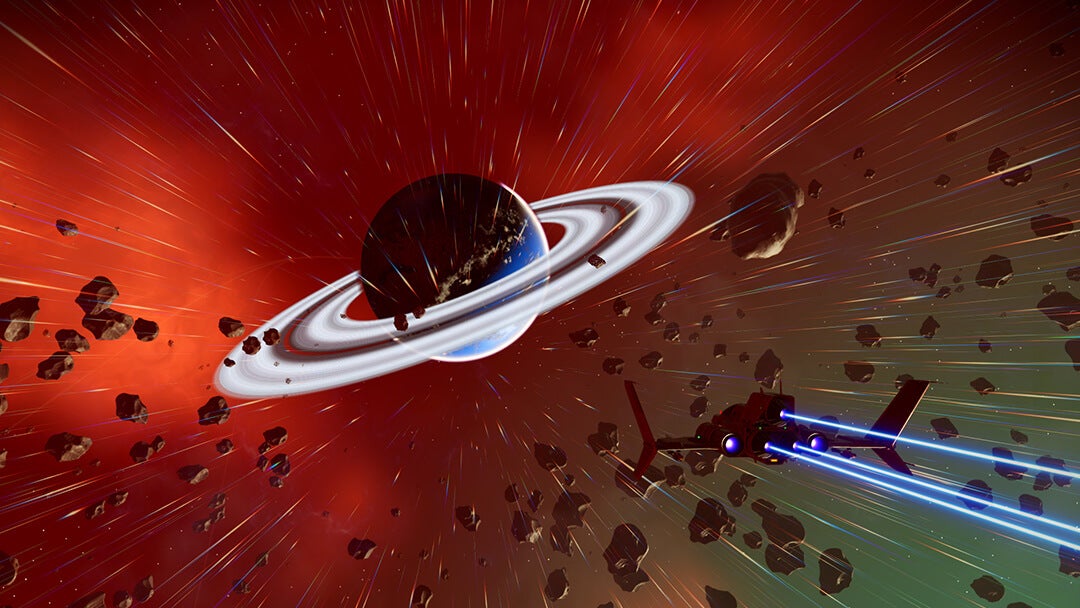 If you played No Man’s Sky upon its initial release in 2016, the opening hours of this new update tread similar ground. You’re an intergalactic explorer who finds themselves on one of millions of procedurally generated planets. The environment you awake in could be brimming with alien wildlife or toxic natural hazards.

However, danger is always juxtaposed with beauty, and the algorithm responsible for No Man Sky’s living, breathing worlds has clearly come on leaps and bounds. Each new planet is abundant with dynamic creatures and bustling fauna spread about the place in a way that feels far more natural. No longer will you stumble into the same handful of variants across each star system.

This makes the inevitable grind for resources in the early hours far easier to swallow, as you’ll be doing plenty of it before really finding your feet. The tedious act of gathering ingredients for jet fuel and essential machines takes a while, but once you find a groove the act of moving between planets is a trivial distraction at worst. That’s if you decide to do such a thing instead of founding a base and settling on a planet that suits your fancy.

Many of No Man’s Sky’s new features come into fruition once you’ve founded a base and thrust into the true meat of multiplayer. Yep, you heard that right. Hello Games has FINALLY implemented multiplayer, a feature that was teased but sadly never delivered in the vanilla release. 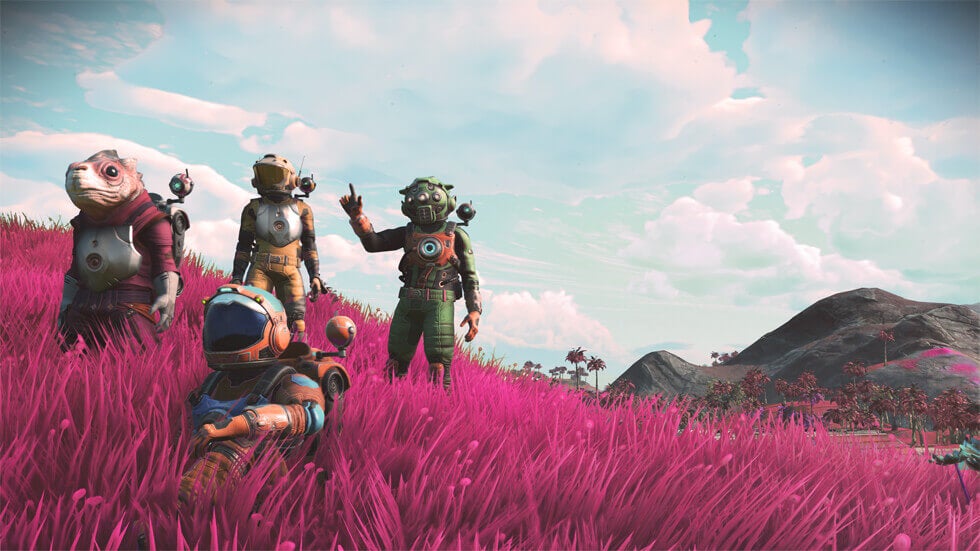 Whether you discover them dynamically while exploring the universe or join a group of fellow explorers right from the main menu, No Man’s Sky now allows friends and strangers alike to explore its endless universe together. This amounts to shared facilities, resources, vehicles and plentiful other things. An experience once defined by its isolationism now invites co-operation, which was a distinct worry for me at first.

Fortunately, those who prefer journeying from planet to planet as a mythical loner can do exactly that. You could play for hundreds of hours before stumbling across a single soul, a testament to how vast No Man’s Sky is and how Hello Games is intent on keeping the original experience intact for players who have stuck around. With me being one of those people, I’m all the happier for it.

That being said, I had a blast teaming up with strangers to explore planets or voluntarily trespass on colossal frigates under their command. Interior spaces, whether it be space stations or outposts spread across each planet, simply feel more meaningful than they did before.

Alien lifeforms invite you to initiate conversations and are no longer restricted to three pieces of stale, repetitive dialogue. To an extent, it’s just more alive, and that’s crucial for keeping you engrossed in a universe that can change at a moment’s notice.

Once stale points of interest have been augmented by vendors offering upgrades and potential squads that might require you to befriend other players or venture to a nearby planet to feed wildlife. It’s pedestrian in practice, but imbues No Man’s Sky with a purpose previously absent. With more updates planned in the future, this is definitely a good start. 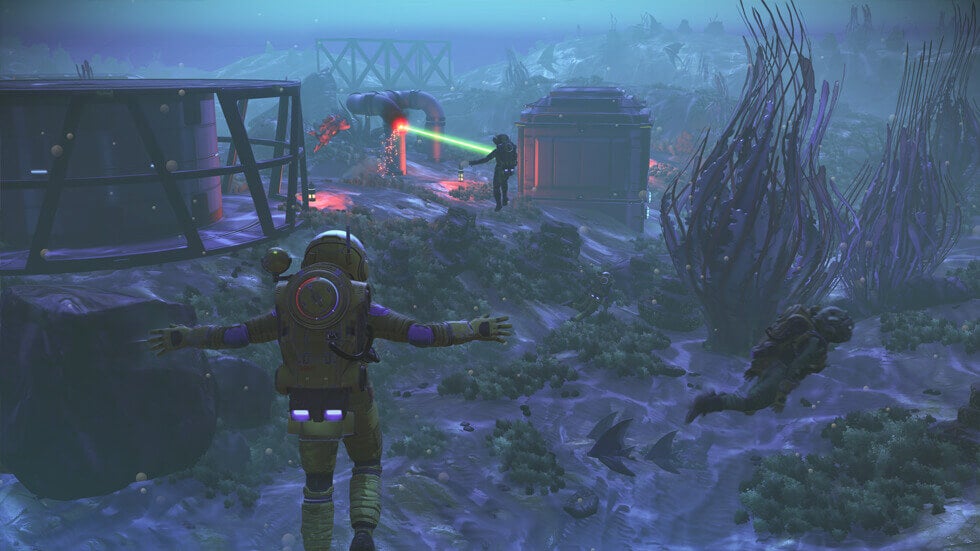 While the NEXT update injects new life into No Man’s Sky, a few unusual problems stop this digital fabric being free of wrinkles. The inventory system can still feel slow and cumbersome, even if new shortcuts make recharging equipment and storing multiple versions of the same item much easier.

Trivial acts like refueling ships or weapons feel like a detriment to exploration. Joy comes from discovering new planets, and rarely surviving the hapless wastes amidst them. With just a smidgen of extra forgiveness, this would make the flow of gameplay far, far more rewarding.

Those wanting to ignore the matters of resource management and survival can dive into Creative Mode for cosmetic experimentation and a more relaxed approach, although you won’t be able to progress through the narrative.

Speaking of story, it’s never felt more complete, with unique characters and arcs you’ll come to discover. The majority of it is told through small snippets of dialogue, so don’t expect anything too extravagant. But, once again, it’s worlds beyond the original game. 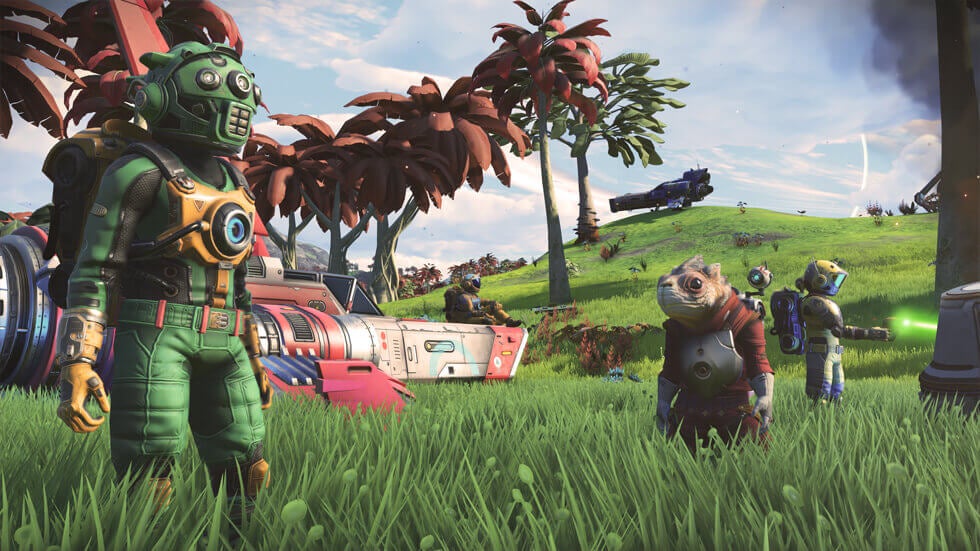 The cherry on top of Hello Games’ latest update are a flurry of quality of life improvements that, while small in actuality, come together to create an overall package that is quite magnificent. It’s a visual marvel, complemented by a photo mode that can turn even the blandest of environments into screenshots worth showing off to your friends. Oh, and you can now play in first and third-person, the latter option providing a much grander perspective of each planet, whether you’re on foot or gliding aboard a ship.

No Man’s Sky is a vastly different game compared to its 2016 release. A range of updates, big and small, have culminated in transforming a disappointing space affair into an intergalactic journey that, frustrations aside, is well worth taking.