What is the Nikon Z6?

The Nikon Z6 is the mirrorless, full-frame camera that hobbyist photographers have been waiting for from Nikon.

Announced at the same time as its sibling, the Nikon Z7, it’s an all-rounder with a more wallet-friendly price tag that puts it right up against the excellent Sony A7 III.

That’s not to say the Nikon Z6 is a cheap camera, particularly when you consider the price of full-frame lenses. But at just a smidge over £2,000, you do get a very solid camera with some great features for your cash. 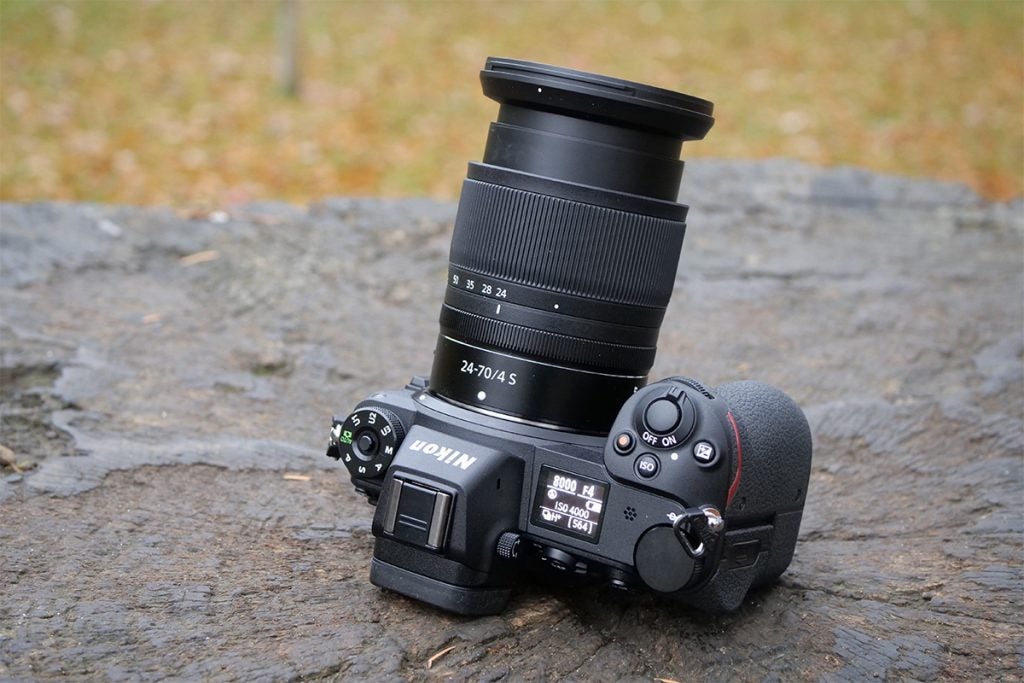 In terms of design and handling, the Z7 and Z6 are identical. They have the same screen, viewfinder, single card slot and control layout.

Internally, though, there are a few key differences. Most notable is the lower resolution full-frame sensor, which at 24.5 megapixels, has almost half the pixels of the Z7’s 45.7 million. While this may makes it less appealing to those who prize super high resolutions, it can lead to better performance on other areas – such as in low light.

It also facilitates a faster frame rate. The Z6 can shoot at 12fps, compared to 9fps for the Z7, so it’s also the better choice for sports and action photographers.

Autofocusing is another point of difference, with the Z6 offering a 273-point hybrid AF system, compared with the Z7’s 493-point system.

So can the Nikon Z6 repeat the success of its sibling and convince you to make the jump from DSLR to mirrorless? It certainly makes a very convincing argument.

One of our favourite things about the Nikon Z7 is just how closely it compares to Nikon’s DSLRs in terms of handling. That means that if you’re picking one of these up from using something like the Nikon D500 or Nikon D850, you’ll immediately feel at home with the layout and controls. Basically the Z6, like the Z7, is a miniaturised DSLR.

While it may be smaller than a DSLR, it’s not so small as to be cramped or difficult to use. There’s a chunky handgrip which feels comfortable to use for extended periods, even when you mount some longer DSLR lenses to the Z6 via the optional FTZ mount adapter (an extra £269). 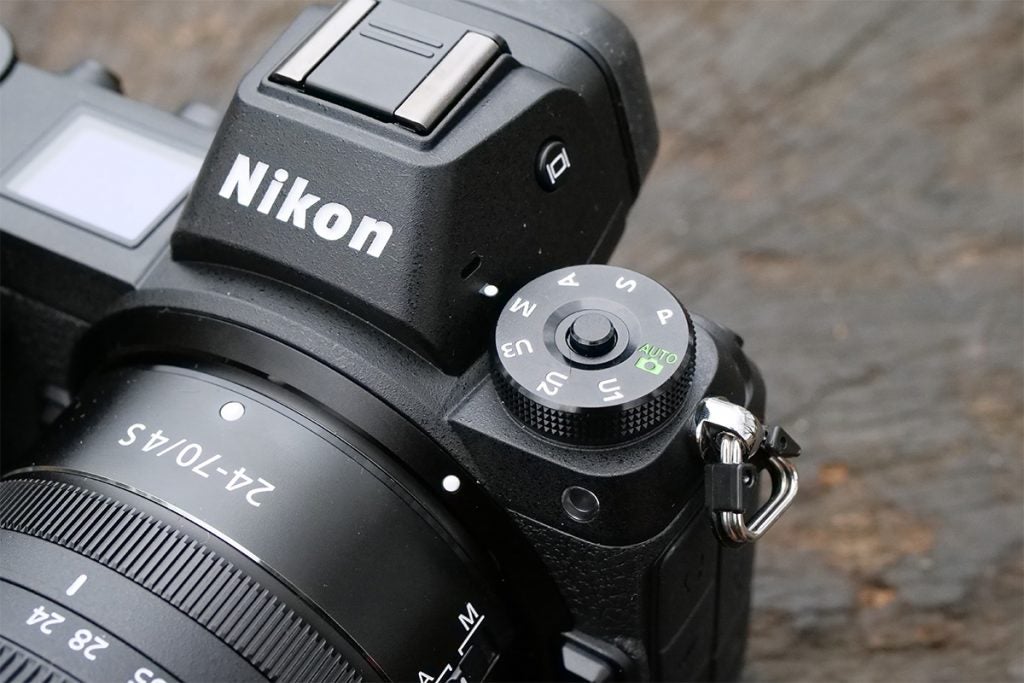 The Z6 strikes the right balance of compact dimensions and comfortable, DSLR-like handling

The Z6’s closest rival is probably the Sony A7 III. The Z6 is a touch bigger than its Sony rival, making it just roomy enough to have better spacing between buttons and a much more enjoyable shooting experience.

A dual control dial at the front and rear of the grip will again be familiar to anyone coming from a DSLR background, and there’s also a joystick at the back which you can use to shift the focus point around the frame, or move through either the quick or main menu.

The quick menu is accessed with a quick tap of the “i” button. You can move around this menu with the physical buttons, or by touching the screen to make changes. We’ve found using a combination of physical and virtual (touch) controls makes for the best experience.

Other buttons include a navipad, menu button, drive mode button, magnification buttons, an AF-On button (which comes in handy for back-button focusing), as well as a display button. The majority of buttons are grouped on the right hand side of the body for easy one-handed thumb operation. 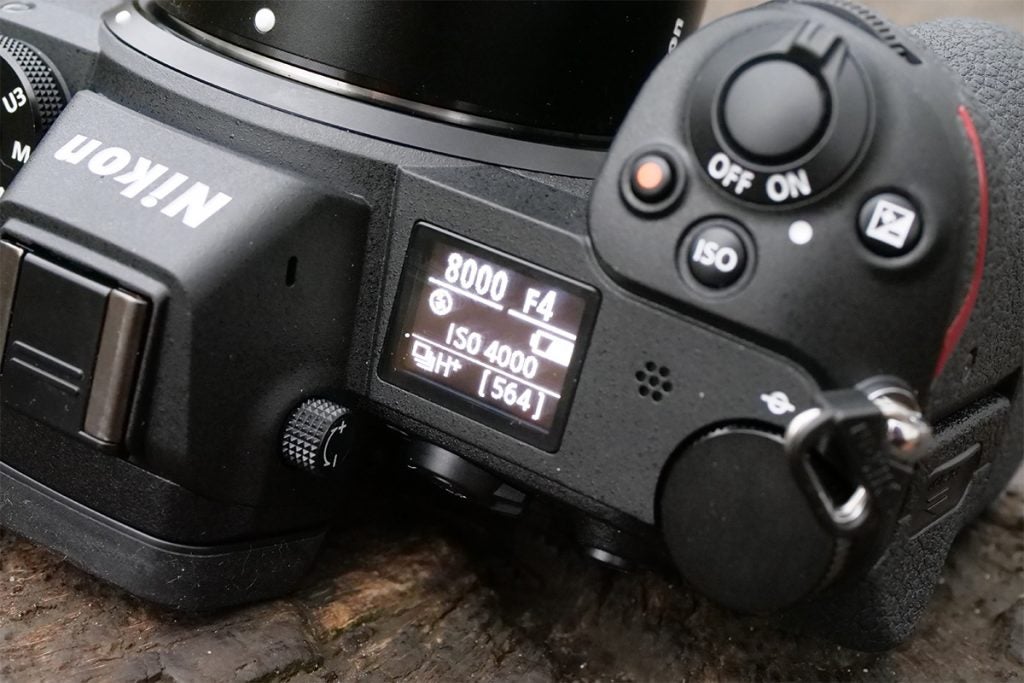 With the same weather sealing as the trusty Nikon D850, the Z6 is a tough beast. It should withstand a downpour, as well as surviving the odd knock or scrape.

On the top of the body is a top-plate LCD where you can see all of the main settings at a glance, such as ISO, remaining memory card space, shutter speed and so on.

Just like the Z7, the Z6 features just a single XQD slot. This is arguably less of a problem for the less pro-oriented Z6, and XQD cards are faster than SD, but it’s still bad news if you like to create a backup in camera. Then there’s also the issue of XQDs being relatively expensive to buy, not to mention that you might also want to pick up a reader too.

Equipped with a 3.6-million dot viewfinder, the Nikon Z6 (and Z7’s) viewfinder is without doubt one of the best electronic ‘finders on any camera.

Naysayers who hate electronic viewfinders might even have their heads turned by looking through one of these – it shows a superbly bright and clear view of the scene, right into the corners. It also previews settings changes before you take the shot, and gives you the option to check you’ve nailed it by displaying a preview. 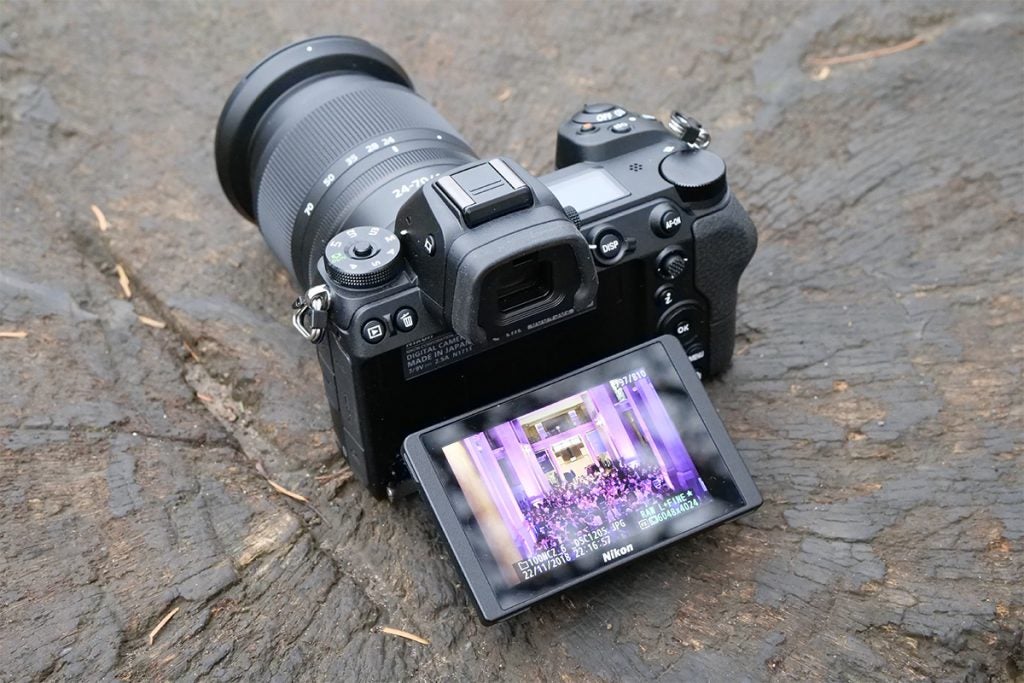 The screen tilts upwards by 90 degrees and down by 45 degrees, which is handy for shooting from tricky angles.

As well as the viewfinder, you’ve got a 2.1-million dot, tilting touchscreen. This comes in super handy for shooting from awkward angles, and tilts upwards by 90 degrees, and downwards by 45 degrees. Of course, it’s less useful than a fully articulating screen if you’re shooting in portrait format, or for video work, but it’s certainly better than a fixed screen.

The way the touch-sensitivity has been implemented is also great. You can use it to set the focus point, as well as fire off the shutter via a simple tap, if you like. You can also use it to make selections in the various menus, as well as swiping through images and pinching to zoom. A nifty trick is double tapping on the screen to immediately display a 100% view of the scene – perfect for checking focus has been nailed.

Although the Nikon Z6 has a lower-resolution sensor than the Z7, we were confident that it would still be capable of producing some excellent images.

Happily, that has most definitely proven to be the case. While some professionals may feel the need for ultra-high resolution – and it certainly helps with things like cropping – most photographers will fine that 24 megapixels is more than enough. 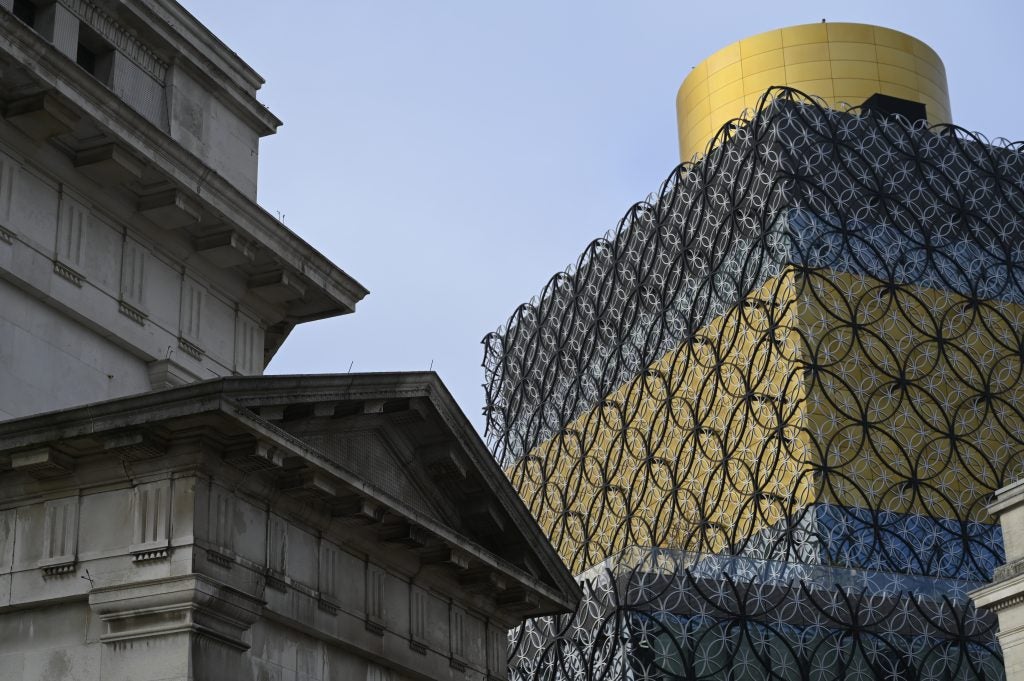 Images are very detailed, have great dynamic range and – especially when using the native S lenses – super sharp. Having fewer pixels also makes the Z6 just that bit better equipped for low light shooting, so if you’re somebody who favours dark shooting situations, you may also want to consider this over the Z7.

In our lab tests, the sensor resolved detail on a par with the Sony A7 III and was around what we’d expect from a 24.5-megapixel sensor that is equipped with an optical low-pass filter. Detail remained high at ISO 6400, with the level dropping at higher ISOs. Noise performance was impressive too, with images at ISO 1600 being almost as clean as those taken at ISO 100. Even at ISO 12,800 and ISO 25,600, you can get very decent results if you don’t mind applying some noise reduction.

In the majority of cases, focusing was quick and accurate. It seems to fare ever so slightly better than the Z7 when following erratic subjects, which is good news for those looking towards the Z6 for sports and action shooting. It’s still not capable of keeping up with the likes of the Sony A9 – but it is also nearly £3,000 cheaper. 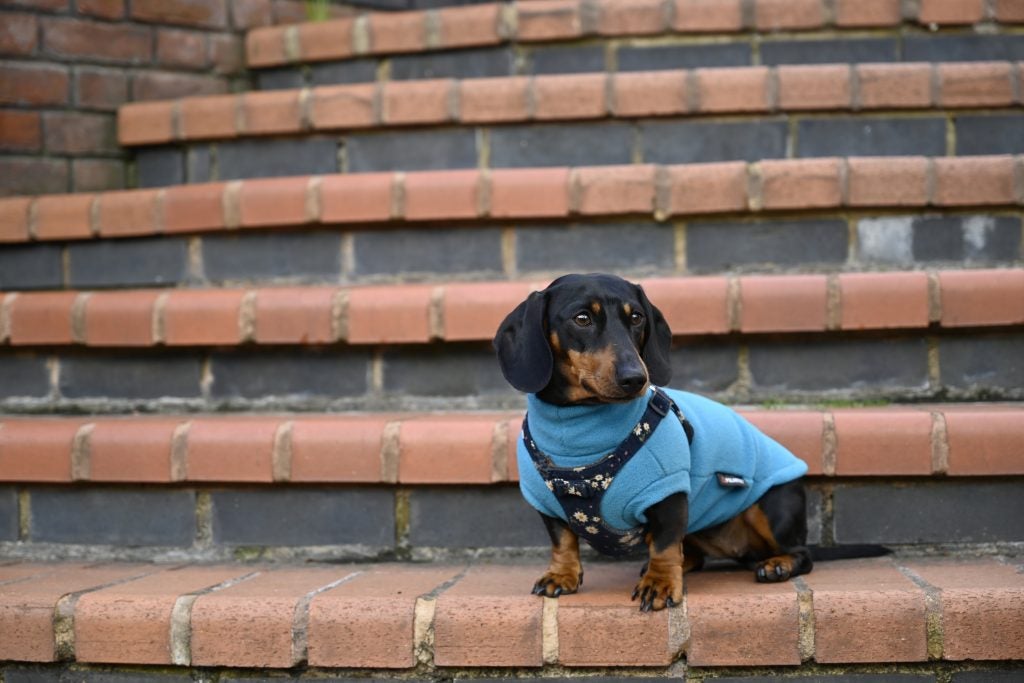 The in-built image stabilisation system is just as effective here as it is with the Z7, helping you to get very sharp shots handheld when shooting at relatively slow shutter speeds, particularly in low light.

Using the Z6 in matrix metering mode – which is what Nikon calls its all-purpose metering – results in well-balanced exposures in pretty much every shooting condition. Automatic white balance also copes well with a range of different lighting conditions, including artificial light.

Battery life is, for now at least, still the major drawback of mirrorless cameras. The official rating of the Z6 is just 310 shots, but you can eke more out of it with good shooting practice like switching off the camera between shots. For the average user, battery life should see you right for a full day. But if you’re at all concerned, or you know that you’re particularly trigger happy, then a second battery (which will set you back £69) is recommended.

As with the Z7, you can charge the Z6 via USB-C. That means you can also charge it on the go with an external power pack. 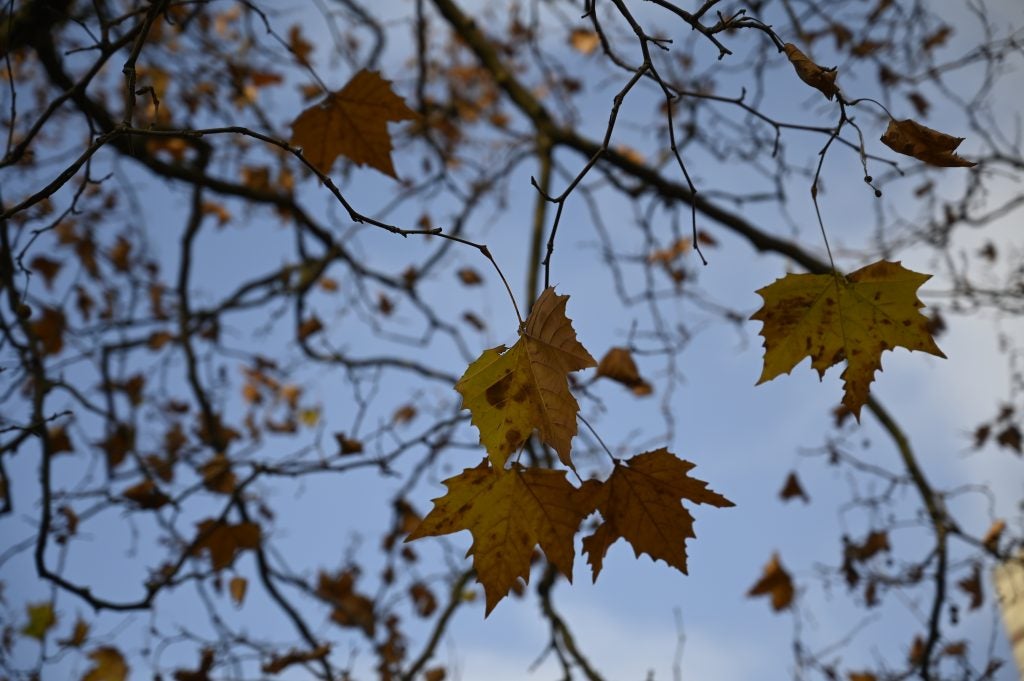 Why buy the Nikon Z6?

The Nikon Z6 is a brilliant new full-frame mirrorless all-rounder. If you’re trying to decide between it and the Z7, you need to consider what kind of photographer you are.

If you crave high resolution, perhaps for shooting super-detailed landscapes, then the Nikon Z7 is the obvious choice. But if you’re somebody who shoots a bit of everything, and crucially, wants to save a bit of cash, then the Z6 is the more suitable full-frame mirrorless camera. In fact, it might just be the best one you can buy today.

Still, there are six more on the way for 2019 (including the exciting 58mm f/0.95 “Noct”) plus a further three scheduled for 2020. And in the meantime, there’s always the FTZ adaptor for using Nikon’s huge range of existing F Mount glass.

DSLR owners who are thinking of making the switch to mirrorless might also be more tempted by the Nikon Z6, thanks to its familiar and intuitive handling.

Put this fantastic handling together with excellent image quality – and that attractive price point – and you’ve got the best enthusiast-level, full-frame mirrorless camera you can buy right now. 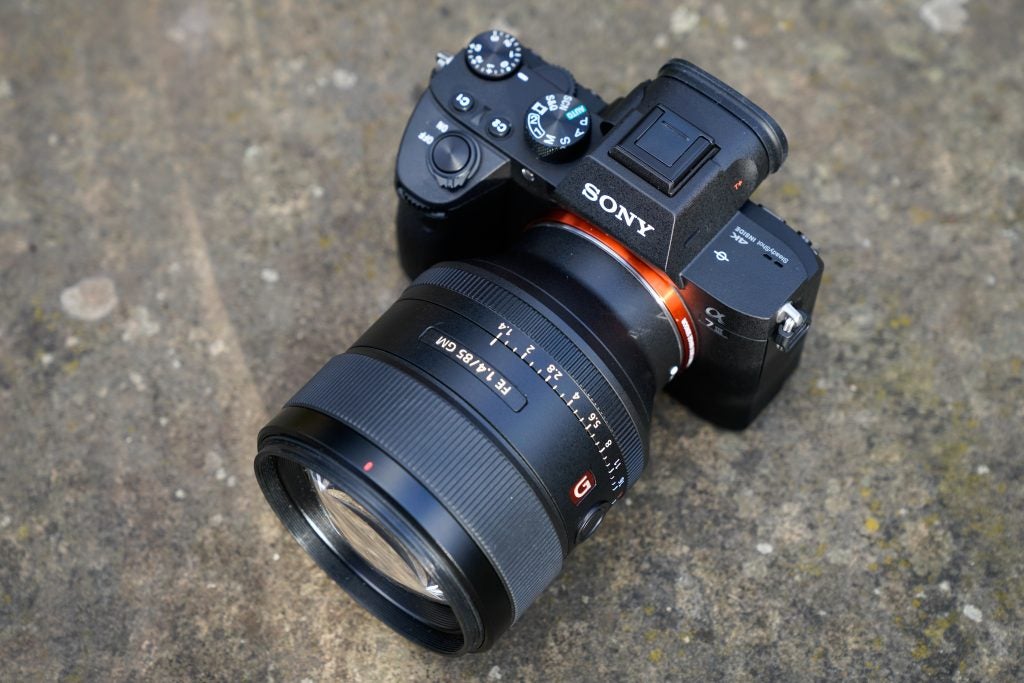 Another fantastic all-rounder, the Sony A7 III is the Z6’s biggest competitor. It features a 24.2-megapixel full-frame sensor, 10fps shooting, and also comes with in-body stabilisation. We think handling is a little fiddly thanks to the small size of the body and button layout, but for now at least, it’s a little bit cheaper than the Z6, and there are a lot more lenses available for the Sony system. 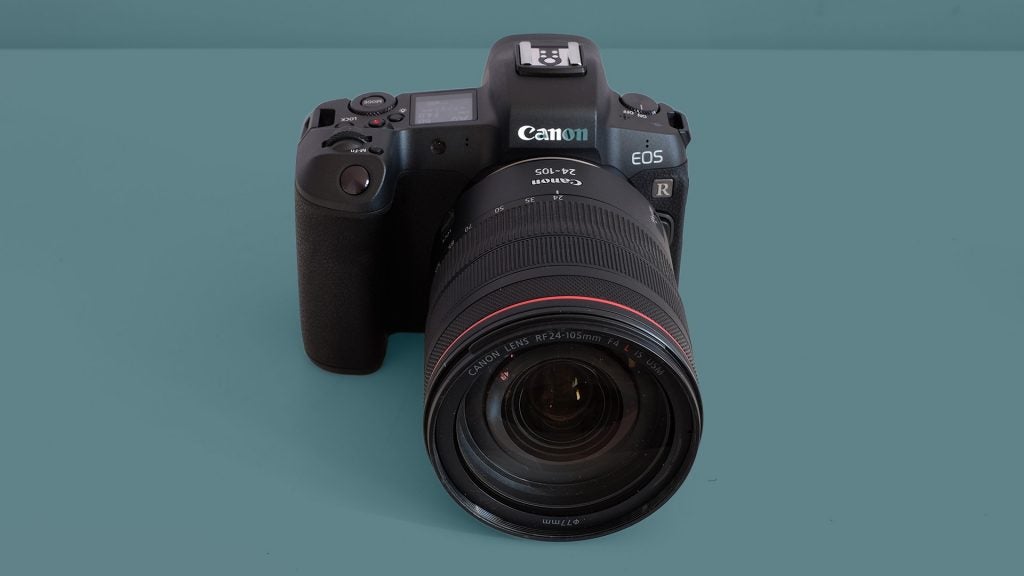 While it’s tempting to compare the Canon EOS R with the Nikon Z7, but it’s perhaps fairer to liken it to the Z6. Canon’s full-frame mirrorless has underwhelmed a little, but if you’re an existing Canon user it makes a lot of sense – it’s also just that little bit better at focusing in low light than the Z6, which is definitely something to consider. 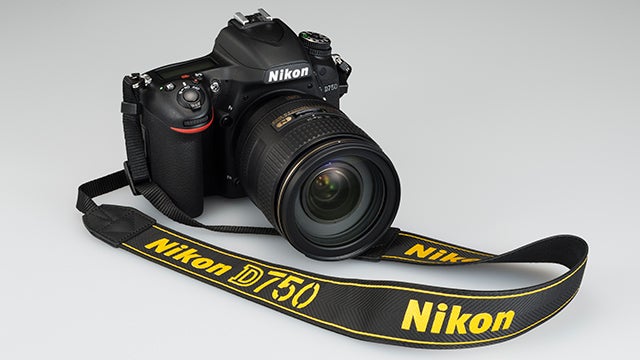 Nikon’s own ‘entry-level’ full-frame DSLR shares the same kind of audience as the Z6. It’s a camera which is starting to show its age now, but is still a great all-rounder for those looking for their first full-framer.

It’s got a 24.2-megapixel sensor, 6.5fps shooting, Full HD video recording and a 51-point autofocus system. The Z6 beats all of these specs, but the Nikon D750 offers traditional DSLR styling, an optical viewfinder – and most importantly – you can buy one for around £1500.