The D7500 has a reasonably large and bright optical viewfinder, with 0.94x magnification and 100% coverage of the lens’ field of view. A sensor above the eyepiece automatically switches off the rear screen when you’re using the viewfinder. As well as displaying the most important exposure data in a panel beneath the focusing screen, it’s also possible to overlay gridlines to aid composition or show a dual-axis electronic level – although, oddly, you can’t have both at the same time.

Naturally, you don’t get any of the advantages of electronic viewing when it comes to accurately previewing exposure, white balance or depth of field before shooting – which is a considerable disadvantage of DSLRs compared to mirrorless cameras. 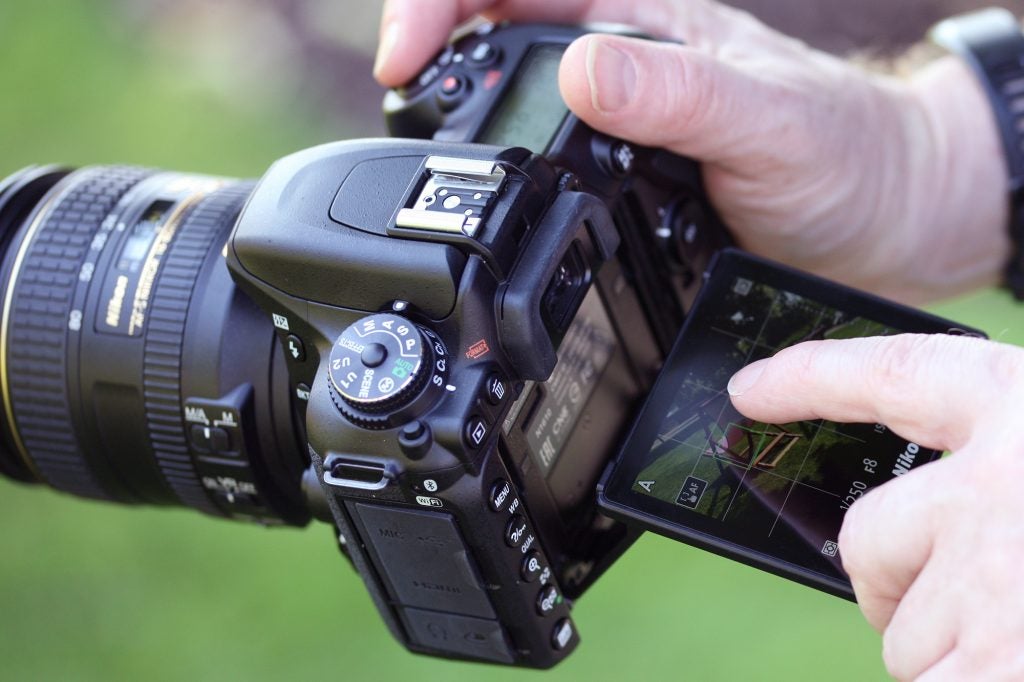 Below the viewfinder is the 3.2in 922k dot LCD, which is an impressively slim unit that tilts up and down while adding little to the depth of the camera. To be honest, I’d have preferred a fully articulated design as seen on the D5600 or Canon EOS 80D, since tilt-only screens are useless when shooting in portrait format.

In Live View the screen gives an accurate depiction of how your shots will come out, with exposure, white balance and depth of field all previewed live. This represents a considerable advantage over older Nikon D7000-series DSLRs, which couldn’t adjust the aperture diaphragm while the cameras was in Live View.

Alongside touch focus and touch shutter release in Live View and video modes, the touchscreen can be used to operate menu selections and browse through images in playback, just like on a smartphone. But overall touch operation still feels tacked-on as an afterthought, and the D7500 lacks features common elsewhere – such as touch focus point selection when using the viewfinder, or a customisable touch-sensitive control panel you can configure with your most-used functions.

When it comes to autofocus, it’s very much a tale of two systems. For viewfinder shooting the D7500 uses a 51-point phase-detection system, with the AF array providing decent coverage by SLR standards – about 75% of the frame width, and 50% of its height. Autofocus is super-fast and decisive, even in low light; indeed, Nikon says it’s sensitive down to -3EV, or effectively moonlight. The D7500 also gains the group-area AF mode previously seen on the D500, which allows multiple AF points to be used for keeping track of a moving subject, and works very effectively. 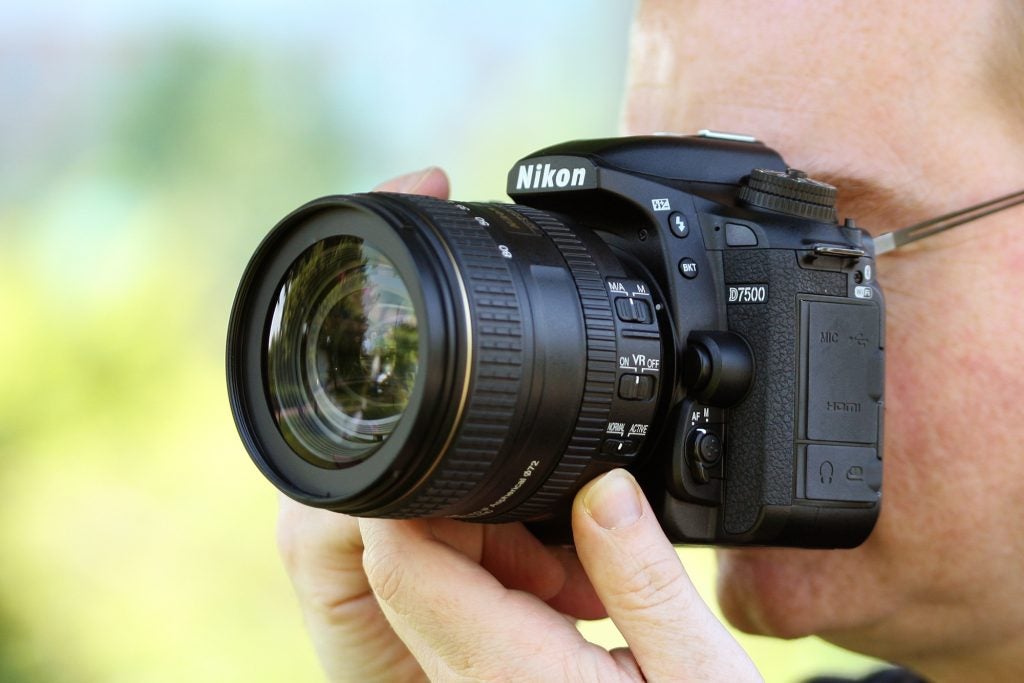 The D7500 works superbly for eye-level shooting, but is less satisfactory in Live View

Switch to Live View, however, and it’s a very different story. Nikon is still using a rather basic contrast-detection system, and it’s painfully slow compared to mirrorless cameras or Canon’s Dual Pixel AF system. It’s okay for static subjects, but don’t even think about using it for anything that moves – indeed, Nikon doesn’t even bother offering an AF-C mode. On a more positive note, though, the AF point can be placed anywhere in the scene, and since focusing uses the image sensor itself, it’s consistently accurate – even with fast primes and off-centre subjects.

Seasoned DSLR users will be used to this kind of behaviour, and may well be happy using the two AF systems in a complementary fashion. But the fact remains that the D7500’s main competitors all focus much quicker when you’re shooting with the rear screen.

With the same sensor and processor as the D500, the D7500 can record 4K video, giving impressively detailed footage. However, since it’s captured from a 3840 x 2160 pixel area at the centre of the sensor, it imposes a 1.5x field-of-view crop. This can be an advantage if you’re trying to record distant action – sports or wildlife, perhaps – but it’s more problematic if you want to shoot a wide-angle view.

It’s also possible to record Full HD video with no crop, although the quality of the footage isn’t anywhere near as good, and you’d get better results downsampling 4K. That said, it isn’t obviously much worse than other DSLRs, and is fine if you just want to record the occasional video. 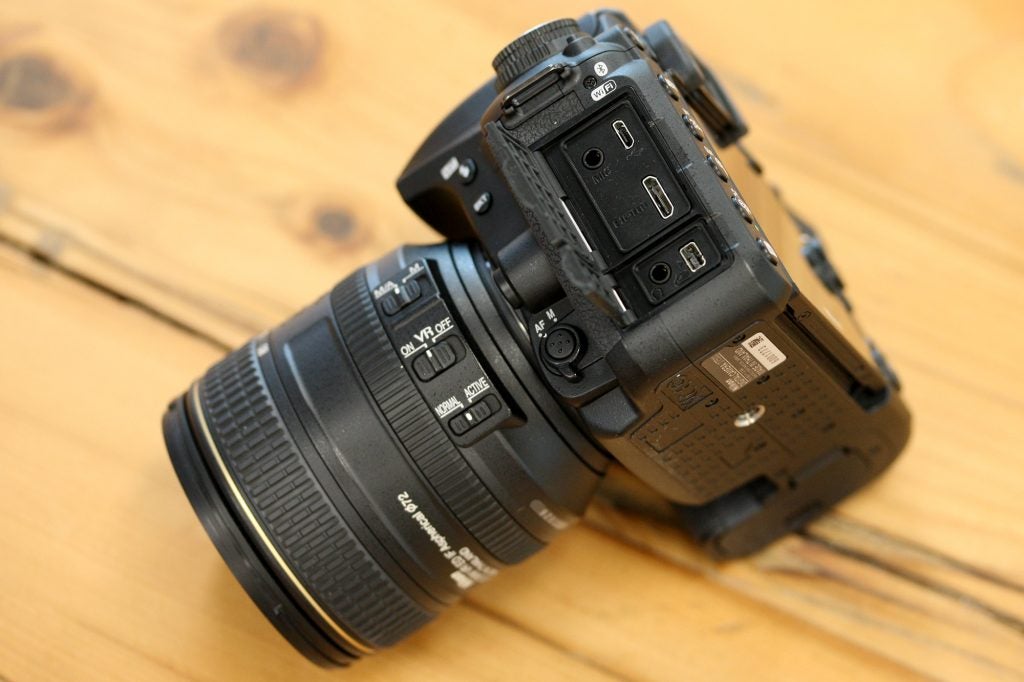 On the side you’ll find microphone, headphone, HDMI, micro-USB, and remote release connectors

One key new feature is the addition of built-in electronic image stabilisation for Full HD video, which appears to be a similar system to the one Canon has recently introduced in its EOS cameras. It does a pretty good job of reducing the visibility of camera shake while shooting video hand-held, even when you’re using an unstabilised lens. However, it isn’t as effective as the in-body systems found in some competing cameras.

Nikon has included a flat Picture Control mode designed to allow easy colour grading of your footage in post-production, and a zebra pattern display to help you avoid clipping highlight detail. You can use the touchscreen to autofocus on a new subject during recording, but this is slow and shows a distinct contrast-detection ‘wobble’ effect in your footage, which means it isn’t very usable in practice.

Sadly, there’s no peaking display to help with manual focusing either. These deficiencies leave the D7500 rather lacking in comparison to cameras such as the Canon EOS 80D or Sony Alpha 6500, so if you’re specifically looking for a camera that’s good for video, this isn’t the best choice.

Like Nikon’s other recent cameras, the D7500 includes Bluetooth and Wi-Fi connectivity. This is designed to establish an always-on connection to a tablet or smartphone via the free SnapBridge app for Android and iOS, and automatically transfer across a 2-megapixel copy of every single image you take for sharing.

Alternatively, you can choose to send across only your favourite images by marking them in playback using the camera’s ‘i’ button. SnapBridge also provides a basic remote control capability with a Live View feed, but with no ability to change any settings remotely, it feels terribly outdated. 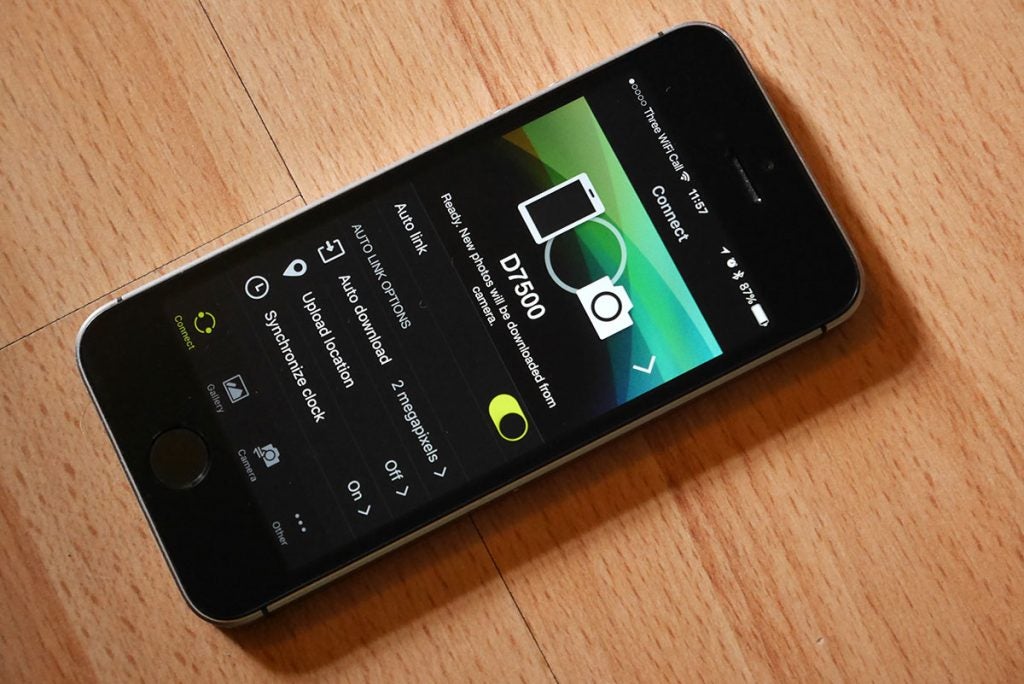 SnapBridge can automatically transfer every picture you take to your phone

It’s possible to pair the camera with multiple devices, so you can alternate between using a smartphone and tablet. However, since there’s no option to set up a Wi-Fi-only connection, you have to manually switch between them each time using the camera’s Bluetooth menu – which isn’t very intuitive or convenient. I found that the best option is to add the Paired Devices sub-setting to the camera’s custom My Menu.

If you’re happy to work how Nikon thinks you should, SnapBridge functions pretty well, transferring your shots to your smart device with minimum fuss. It’s clever enough to pause transmission when the camera battery becomes low to conserve power for shooting, then resume transferring images after recharging. However, if you prefer to work the other way round, taking advantage of the larger, higher-resolution screen of your phone or tablet to browse through your images then pull your favourites across individually, the process is annoyingly slow and clunky, with thumbnails taking an age to generate every single time.

SnapBridge has clearly improved since I reviewed the D500 a year ago, and now seems more reliable. Unfortunately, it still isn’t as polished or functional as other manufacturers’ systems. Hopefully, Nikon can improve on this in future updates.