Comparing Canon’s current DSLR line-up with what it was three or four years ago highlights how, today, the manufacturer offers a wider range of models catering for all types of photographer and sizes of budget. Canon once offered a couple of APS-C DSLRs for beginners, another couple for enthusiasts and two or three full-frame DSLRs for seasoned pros. By contrast, today’s line-up features seven APS-C DSLRs and six full-frame models.

For the advanced amateur photographer, Canon’s double-digit series of DSLRs has always been appealing, typically blending a comprehensive spec with a body-only price that falls just below £1,000. However, with competition in the high-end enthusiast DSLR segment intensifying, new models have needed to offer something new or unique to stay one step ahead.

In the case of the Canon EOS 70D, the stand-out feature was its Dual Pixel CMOS AF system built into its 20.2-million-pixel sensor that redefined the speed of autofocus in live view and movie mode. This game-changing technology was always going to leave the 70D’s successor with big boots to fill and begs the question, is the Canon EOS 80D another revolutionary DSLR or more of a modest update on what we’ve already seen before? 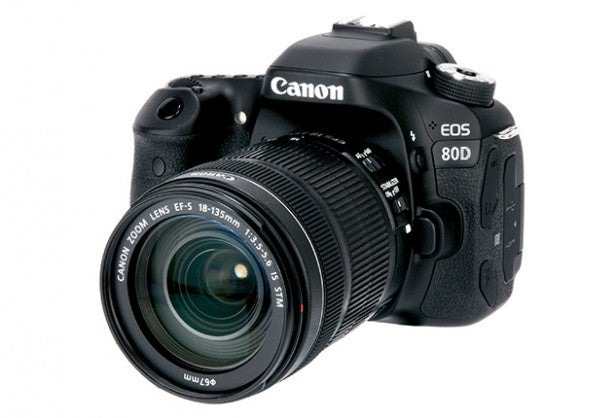 In the three years since Canon last released a double-digit DSLR, its engineers have been working hard to develop a new 24.2-million-pixel CMOS sensor. Much like the 70D’s 20.2-million-pixel CMOS sensor, this new chip benefits from Dual Pixel CMOS AF technology. A more detailed explanation of this technology can be found on page 47. To take it one step further, Canon has introduced continuous autofocus (AI Servo) in live view mode. This was first rolled out on the 760D. 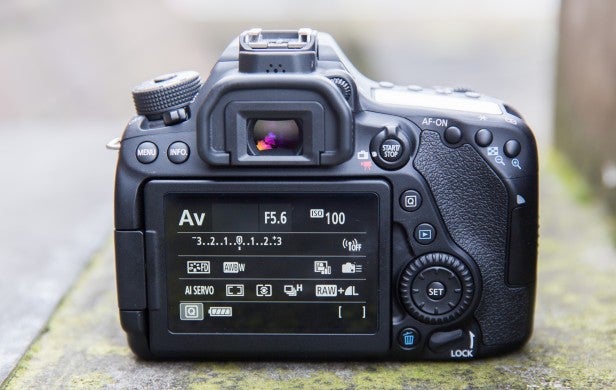 The difference with the Canon EOS 80D is that it has phase-detect pixels spread across the entire frame, which should offer superior performance. Photographers who like to track moving subjects will appreciate having the option to select AI Servo in live view mode. It’s also good to see Canon adding extra control of the Dual Pixel CMOS AF sensitivity from the custom function menu. This allows users to adapt the focus to the shooting situation and create slow, natural or fast-focusing transitions.

The focusing improvements don’t end here. When shooting using the viewfinder the 80D features a newly developed autofocus module that is a big upgrade on the 70D. There are now 45 AF points compared with the 19 AF points on the 70D, and all these are the cross type. The AF system isn’t too dissimilar from the Canon EOS-1D Mark IV, and out of the 45 AF points on offer 27 remain active when using a teleconverter and lens combination with a maximum aperture of f/8. Furthermore, the centre point is sensitive down to f/2.8, and the working range of the autofocus system (-3EV-18EV) is more in line with its closest rival, the Nikon D7200. 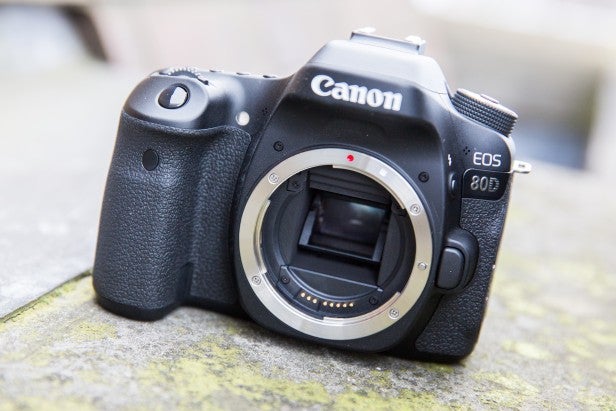 Rather than utilising Canon’s latest DIGIC 7 image processor, the sensor teams up with the manufacturer’s older, but still powerful, DIGIC 6 image processor. This pairing allows the 80D to shoot from ISO 100-16,000 (expandable to ISO 25,600), which works out to be a 1-stop sensitivity gain over the 70D. However, it’s no faster at rattling out a continuous burst than its predecessor, at 7fps. There’s also the option to shoot at 3fps in the 80D’s silent shooting mode, and it’s possible to rattle off a burst at 5fps in live view mode.

It’s not uncommon to see features filter down from models higher up in a manufacturer’s camera range. One example of this is the 80D’s flicker-detection technology. This can detect flickering light and then time each shot to coincide with the peak brightness of the light source for more consistent results. The 80D also inherits Canon’s 7,560-pixel RGB+IR metering sensor that impressed us on the 750D and 760D; yet another improvement on the 70D’s older 63-zone dual-layer sensor. 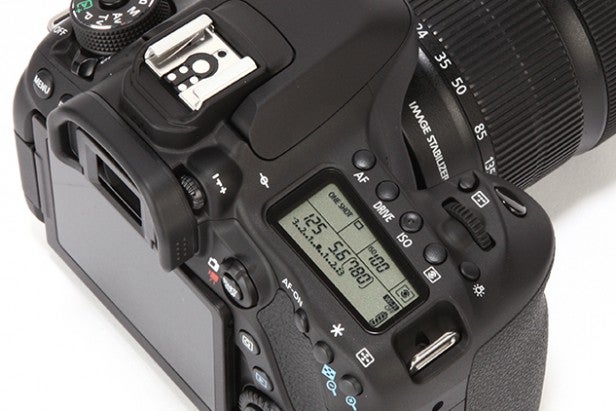 Like the 70D, the 80D’s viewfinder displays a camera-level indicator to avoid skewed horizons. Instead of 98% coverage, it now displays 100% of the frame with 0.95x magnification. In the past, full viewfinder coverage has been exclusive to the more expensive premium models, so it’s great to see this finally filtering down to more affordable enthusiast DSLRs. Beneath the viewfinder, you’ll find a vari-angle 3in, 1.04-million-dot touch-sensitive display that is identical to the 70D’s.

The 80D doesn’t feature 4K video, but does provides videographers with the option to shoot full HD (1,920×1,080) movies up to 60p in the MP4 or MOV file formats. Full control audio levels can be taken directly from the touchscreen. Those who’ve been calling for a headphone socket will welcome the fact that one has been added below the mic port. 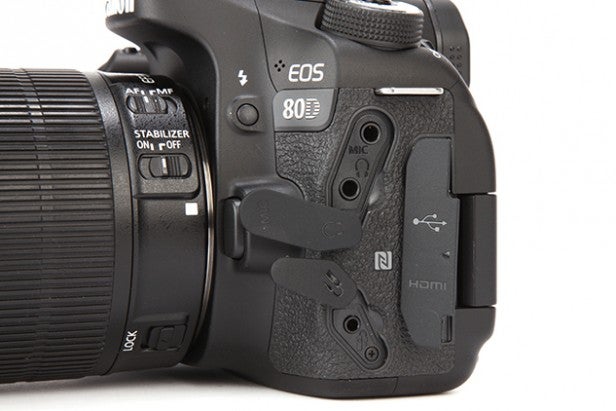 To speed up the connection speed between the camera and android devices, Canon has included one-touch NFC connectivity in addition to Wi-Fi connectivity. There’s also the option to adjust exposure settings, fire the camera remotely, and transfer full resolution JPEGs and MP4 movies to smart devices using Canon’s free Camera Connect app. A new fine-detail effect has been added to the list of picture styles, which adjusts the sharpening and noise reduction to improve the rendition of fine textures in JPEG files. Finally, just like the 70D, the 80D accepts the widely used LP-E6N battery.

For those unfamiliar with the term Dual Pixel CMOS AF, it refers to the 80D’s sensor-based autofocusing system. When the camera is switched over to live view mode, the internal mirror is lifted out of the way of the image sensor, allowing the camera to continuously record the light entering the lens and transmitting the data to the rear screen as a live image.

The downside to this process is that without the mirror in place, the camera can no longer utilise the main phase-detection AF system in order to focus automatically. One solution to this problem was to incorporate AF sensors on the face of the image sensor itself. Previously, these AF sensors have been of the contrast-detect variety, which are typically slower and less accurate at locking on to targets than phase detection – especially when tracking moving subjects. 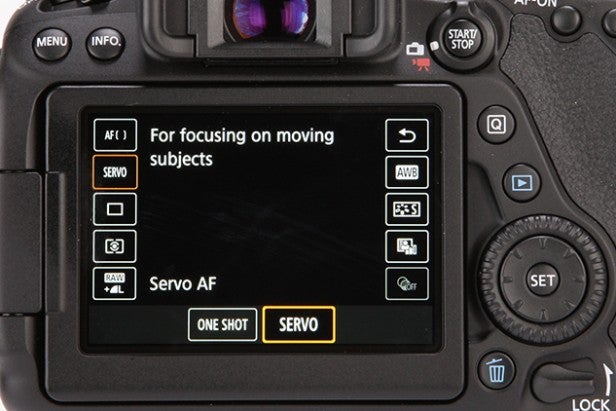 To overcome slow focusing speeds in live view, Canon has developed a Dual Pixel CMOS AF system that supports sensor-based, phase-detection autofocusing. The system works by splitting all the effective pixels on the surface of the sensor into two individual photodiodes – one for left and one for right. Each of these photodiodes can be read separately, allowing faster phase-detection autofocus while simultaneously being used for image capture. The Dual Pixel CMOS AF system is beneficial to both photographers and videographers who’d like to compose and shoot quickly without having to put up with a slow and clumsy autofocus performance. 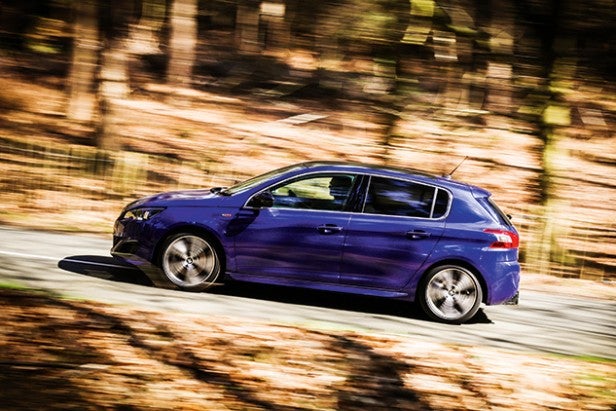 Improving where the 70D left off, the 80D’s Dual Pixel CMOS AF system now supports Servo AF when shooting still images in live view. This allows the user to select focus on a subject and then track it through the frame all the while the shutter button is half depressed. It’s particularly effective for moving subjects and was used to capture the shot above. The Servo AF mode has successfully maintained focus on the car, which was travelling at 30mph.