The Nikon D7500 is a DSLR designed for enthusiast photographers. With a 20.9-megapixel DX format sensor and 8fps shooting, it sits between the D5600 and the D500 in Nikon’s range, and costs around £1300 for the body only. Judged on its own merits it’s a fine camera, but it looks poor value compared to the older D7200, which remains on sale at around £850.

With Nikon’s Expeed 5 processor on board, the D7500 offers a standard sensitivity range of ISO 100-51,200, which is expandable up to ISO 1,640,000. As we’ll see, these hugely extended ISOs don’t give great results, but that shouldn’t mask the fact that this sensor delivers excellent high-ISO image quality. 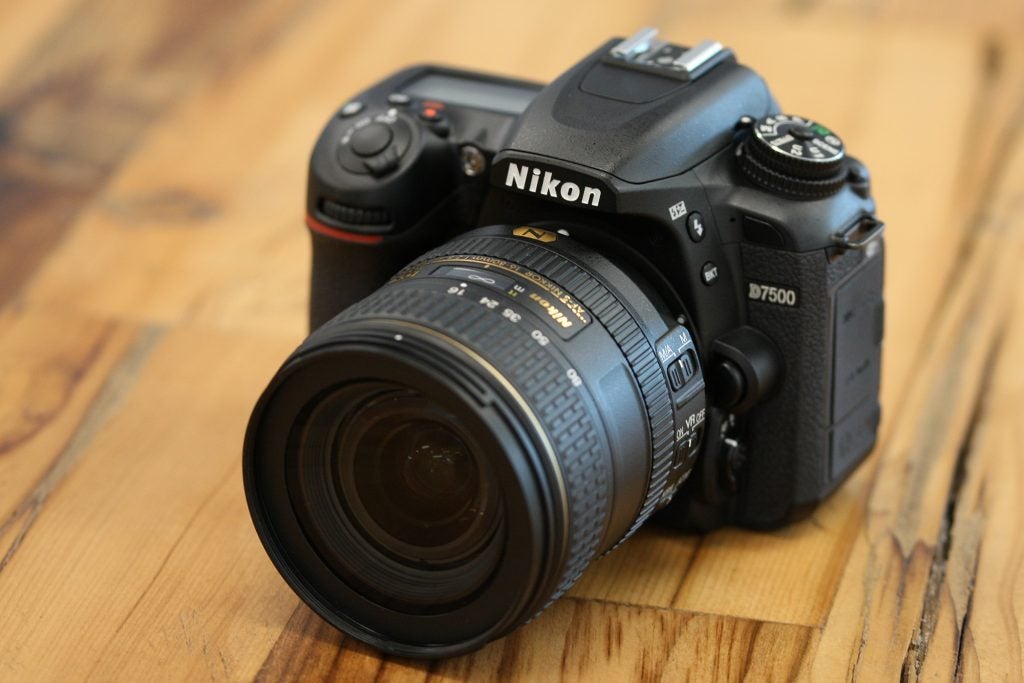 Nikon’s D7500 is a DSLR for enthusiast photographers

Nikon says the D7500 can shoot at 8fps for 50 raw frames in a burst, which is a significant advance over the D7200’s 27 frames at 6fps. In practice, with a 16GB SanDisk Extreme U3 card rated at 90MB/sec I measured an even faster rate of 8.2fps, but a slightly smaller buffer of 46 frames using lossless compression. This should still be ample for all but the most trigger-happy of action shooters.

Being a DSLR, the D7500 can track focus at full speed using its 51-point autofocus system, which uses the same phase-detection module as the D7200. Users can also match their specific lenses to their camera, with the Auto AF Fine Tune function to give the best focusing accuracy.

Metering employs a 180K-pixel RGB sensor – which is also used for face detection and subject recognition – while feeding information into the AF system to help the camera understand how a subject is moving around the frame. Alongside the usual matrix, centre-weighted and spot modes, the D7500 gains Nikon’s highlight-weighted metering. This aims to avoid clipping bright areas of the image to white, allowing the user to make the most of the sensor’s dynamic range when post-processing raw files. 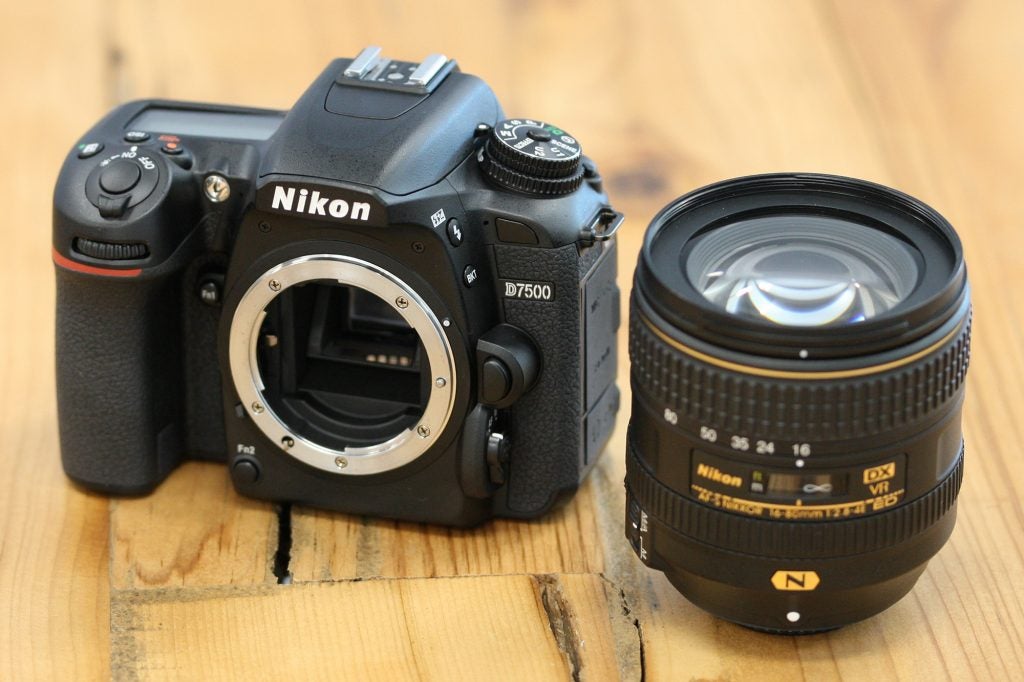 There’s an in-body autofocus motor for AF and AF-D lenses, but the D7500 won’t meter with older manual-focus lenses

Perhaps surprisingly, the D7500 has just a single SD card slot, unlike either the D7200 or the D500. Another limitation is that older manual-focus lenses can only be used in manual-exposure mode, without any metering. While these omissions will disappoint Nikon fans, fundamentally, they reflect the fact that the D7000-series is no longer top of the firm’s DX lineup.

Better news is that the built-in pop-up flash can work with Nikon’s radio-controlled Advanced Wireless Lighting system to operate off-camera speedlights wirelessly for creative lighting control. Nikon says the EN-EL15a battery should provide 950 shots per charge, and while this is down from 1110 compared to the D7200, it will still be ample for most purposes. In-camera raw processing allows you to tweak images before sharing them, and to this end, built-in Wi-Fi and Bluetooth allow connection to a smartphone driven by Nikon’s SnapBridge app. I’ll look at this in more detail later. 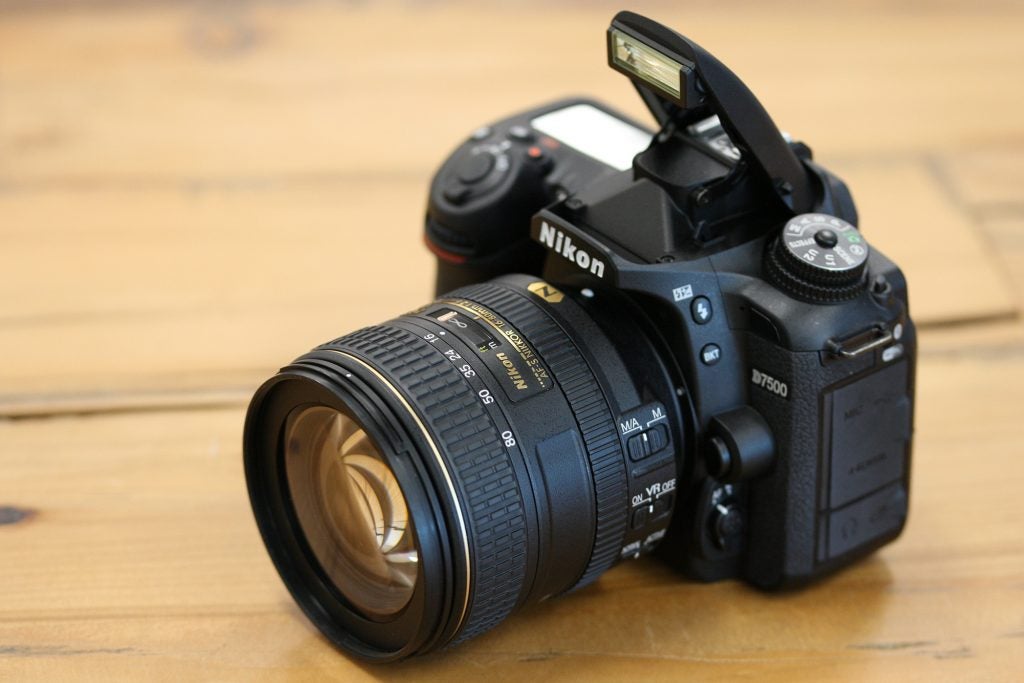 Video shooters will find both 4K and Full HD recording to be available, but while the latter uses the full width of the sensor, 4K reads from a 3840 x 2160 pixel region in the centre; this imposes a 1.5x field-of-view crop. In-camera electronic image stabilisation is available to compensate for shake when shooting hand-held. This has the advantage of being able to correct for rotation around the lens axis, which is important for video but something in-lens stabilisation simply can’t do. It also works with every lens, not just optically stabilised ones. But, sadly, it only functions in Full HD mode, not 4K.

For this price you’d expect Nikon to deliver a solid-feeling, ergonomically sound camera, and with the D7500 that’s exactly what you get. It has a deep grip with a thick rubberised coating that feels extremely secure in your hand, and a weather-sealed body that’s compact without being cramped. The body measures 135.5 x 104 x 72.5mm and weighs 720g – a little heavier than the D7200, but noticeably smaller than the D500. 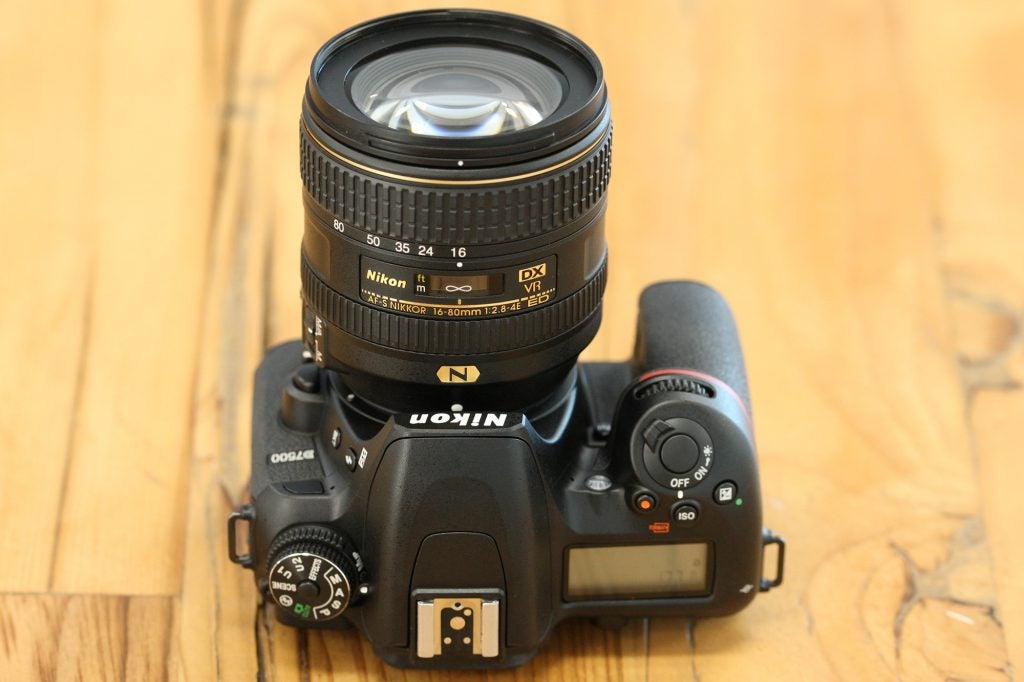 The control setup is based on the D7200’s, but in a welcome change, the ISO button is now much more sensibly placed; it sits immediately behind the shutter release, as on the D500. This comes at the expense of the D7200’s metering mode button, which has relocated to the camera’s back – a much more sensible prioritisation of these two functions.

Almost every important shooting function can be changed using easy-to-access external controls. There’s an exposure mode dial on the left shoulder and a drive mode dial beneath, both of which lock in position to prevent accidental changes. Front and rear electronic dials change the main exposure settings, while the D-pad on the back is used to move the focus area.

Key settings such as metering, white balance, autofocus and flash mode have dedicated buttons on the camera body, while two Fn buttons on the front can be customised to suit the user. A press of the ‘i’ button on the camera’s back brings up a short menu of other settings, mostly to do with image processing. Personally, I’d have liked to see a user-customisable quick menu here, like on most other cameras at this price point. But, to be honest, the D7500 is so well set up overall that this is a minor complaint.