What is the Musical Fidelity MF-200?

The Musical Fidelity
MF-200 is the second pair of on-ear headphones we’ve tried from Musical
Fidelity, one of the UK’s premier hi-fi brands.

After we were disappointed with the original MF-100 we were hoping for a big upgrade in this second-generation model. However, a lot of the original issues still remain.

We
like their basic approach to sound, which is the antithesis of the
Beats style, but they’re not all that comfortable and the Musical
Fidelity MF-200 lack the smooth or refined finish to their sound that
makes headphones easy to get on with.  At £229 they are not among our
favourites. 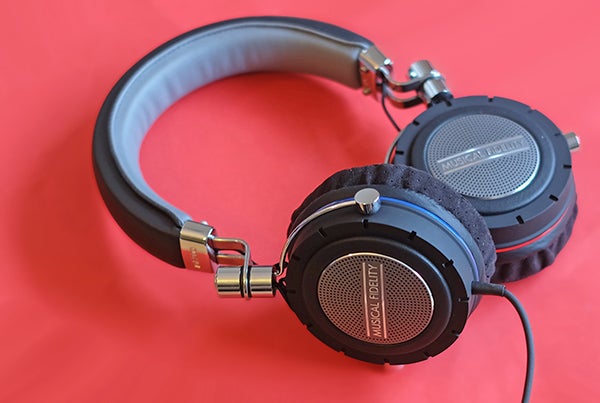 The
Musical Fidelity MF200 are unusual-looking headphones, just like their
predecessors. You might expect something classy and understated from a
very grown-up brand such as this – something a bit Bowers & Wilkins.

However, the MF200 style is chunky and industrial, much like
the Musical Fidelity MF-100. There are notches cut into the outer soft
plastic parts of the cups that make them look a little like
giant tyre treads. It’s more Yorkie bar than Cadbury Flake.

There’s
nothing wrong with this muscular style if it’s what you’re into,
but we’re not sure it fits with a self-proclaimed hi-fi headphone. 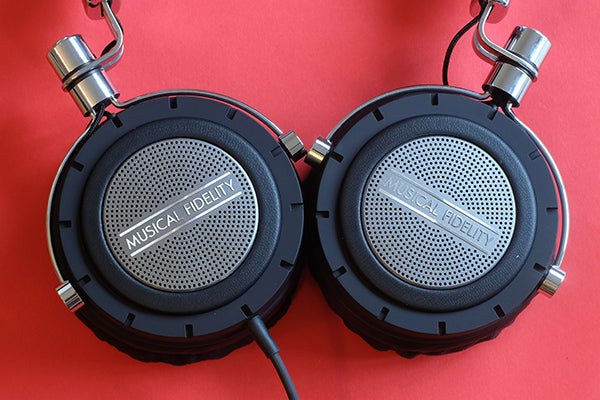 are a few parts of the design we think are rather faulty, though. The
array of different materials in the Musical Fidelity MF-200’s
construction gives them something of a patchwork quilt feel. It ranges
from the good, high-quality synthetic leather headband, to the bad, bin
liner-type material that holds the pads onto
the cups. We’re also not big fans of the blue and red band that wraps
around the cups.

It’s the sort of move Chinese SoundMagic might
make; a bit naff. But we find it harder to forgive in the MF-200 because
while SoundMagic makes predominantly good-value headphones, the Musical
Fidelity MF-200 are a ‘prestige’ model.

A bit more consistency and simplicity would go a long way here. 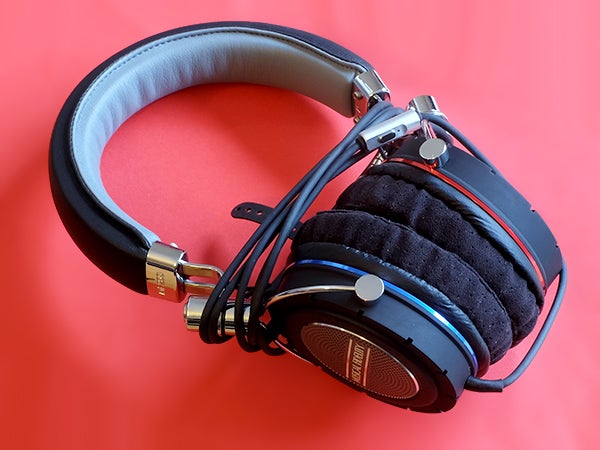 However,
their comfort is a more pressing, less subjective issue. Like the
MF-100, the Musical Fidelity MF-200 have a pretty firm headband that,
initially at least, feels horrible. Their clamping force is too strong
and the pressure distribution is uneven. On first impression
they’re the least comfortable headphones we’ve reviewed in the last 12
months. 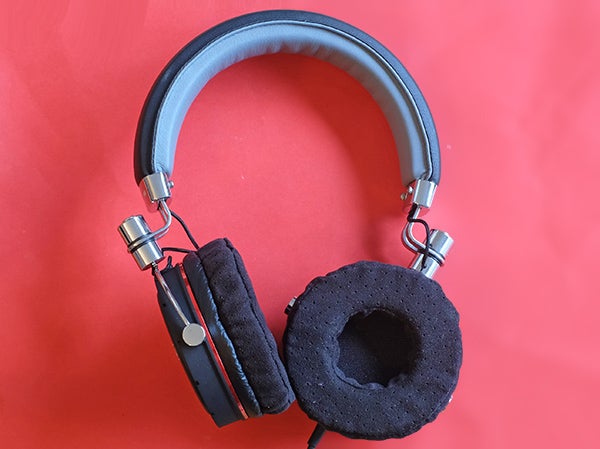 And
it does put you off wearing them. Despite a fairly poor headband
design, though, Musical Fidelity hasn’t totally managed to ruin the
comfort properties of the excellent materials that go into the Musical
Fidelity MF-200 pads.

Alcantara on top of memory foam is pretty
much the perfect combo for long-term listening sessions. So while many
on-ear headphones start to get uncomfortable after a while, the Musical
Fidelity MF-200 are a rare example of on-ear headphones that get more
comfortable. But what a starting point.

Not familiar with
Alcantara and memory foam? They’re modern man-made equivalents to suede
and foam, and work perfectly with headphones in our experience. There
are also synthetic leather pads, which you can switch over yourself. 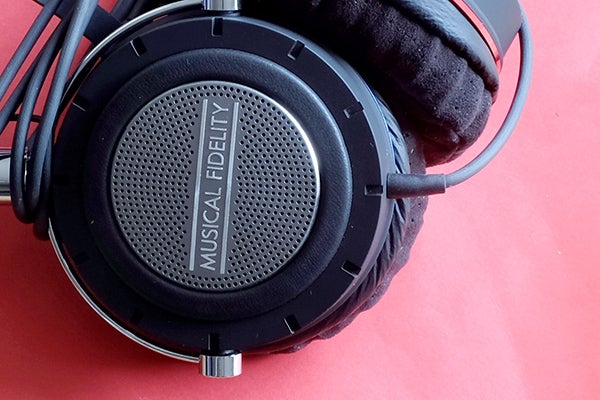 One
other element to note is that the metal skeleton of the headband is
likely to ease up after a few months use. But headphones should not be
designed with this in mind, and after weeks of use out set is still
pretty stiff. It’s good for portable grip, but just isn’t very
comfortable.

Other elements of the Musical Fidelity MF-200 are
geared for portable use too, such as the 1.2m cable and single-button
remote, designed for maximum phone compatibility rather than just for
the iPhone crowd. Still, there are other areas to improve.

First,
noise isolation is quite poor. You can get away with wearing them on
public transport, but they don’t really block out the world very well.
This may be down to the decision to add extra ports to open up the
sound, giving these closed-back headphones some of the characteristics
of an open pair.

The cable isn’t removable either, which some won’t like in a pair as expensive as the Musical Fidelity MF-200. 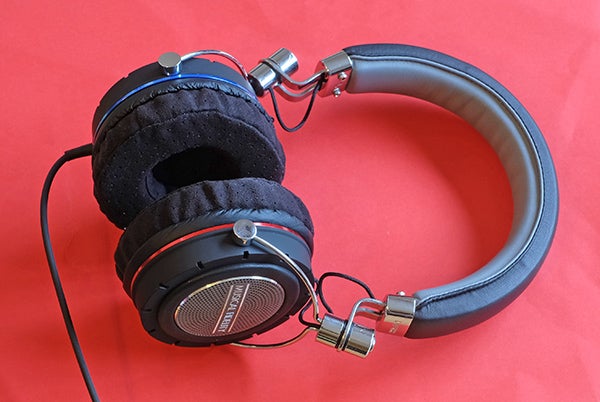 Musical
Fidellity makes claims about the MF-200 sound that align with what
you’d expect from a  hi-fi brand. It says you’ll get a flat, accurate,
low-distortion sound, positioning these headphones as totally different
from the bassy headphones that are currently very popular.

Sure
enough, the bass is rather nice. It’s less anaemic than you might
expect from a headphone that aims for accuracy, with enough power to
sound fun, while still making the Beats Solo 2 sound hopelessly over-bassy in a direct comparison. 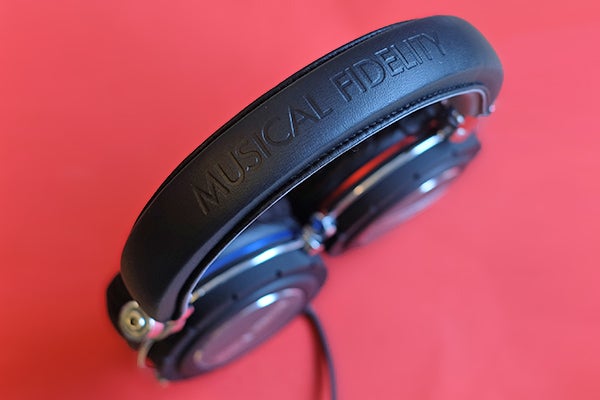 If
it sounds like we’re holding back on the praise, it’s because for all
the commendable elements to the Musical Fidelity MF-200’s basic tuning,
they don’t sound all that nice. They are prone to sibilance and there’s a
fundamental lack of smoothness and refinement that they would need to
really succeed in their aims of offering a portable hi-fi headphone.

Some
material also exposes fairly poor integration between mid-range and
treble, which can cause a sort of treble fizzing in female vocals.

Too
often the Musical Fidelity MF-200 come across as harsh or crude in their
presentation. It’s generally in the treble and upper-mid-range that
this crops up. The treble is simply not nearly as well-integrated and
coherent as the bass. It makes us wonder if Musical Fidelity has only
done half the job of tuning these headphones, much in the way it
squanders the benefit of its high-end ear pads with its headband
design.

Having let them bed in for dozens of hours, the MF-200 do
calm down a bit. But nowhere near enough. They may aim
for sophistication, but fall a way short. 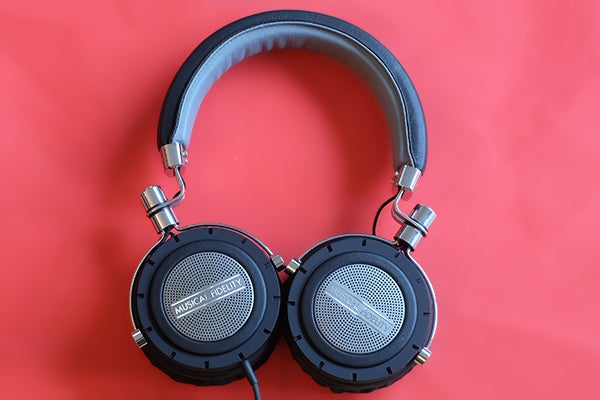 Should I buy the Musical Fidelity MF200?

There’s
no shortage of portable headphones, especially if you have £230 to
spend. With the three Musical Fidelity models we’ve reviewed since the
company entered the market, we’re yet to see a reason to pick its
heapdhones over those of more experienced rivals. It just doesn’t have
the chops yet.

You can now get either of the first-generation Sennheiser Momentum
for under £200 and while they don’t aim for neutrality quite as much as
the MF-200, they are much more successful in every aspect. And if you
want accuracy and don’t need portability, the classic AKG Q701 are now available for £200. In the hi-fi stakes they decimate the MF-200.