A solid Windows alternative to the MacBook Pro for creative professionals.

If you’re after a Windows-based MacBook Pro alternative, you have a few good options to choose between – the likes of Dell’s XPS 15 2-in-1, the HP EliteBook 1050 G1, and the Microsoft Surface Laptop 2 immediately come to mind.

Now, Taiwanese manufacturer MSI is hoping to barge its way straight into the premier league of best creative laptops, with the P65 Creator 8RF. This power-packed notebook serves up an Intel Coffee Lake processor (a Core i7-8750H), an Nvidia GeForce GTX 1070 GPU and making it an excellent choice for creatives and other demanding users, at least on paper.

Of course, at a little under two grand, the P65 isn’t easy on the wallet. Not unless you count swimming in huge volumes of gold coins, Scrooge McDuck-style, amongst your regular activities. 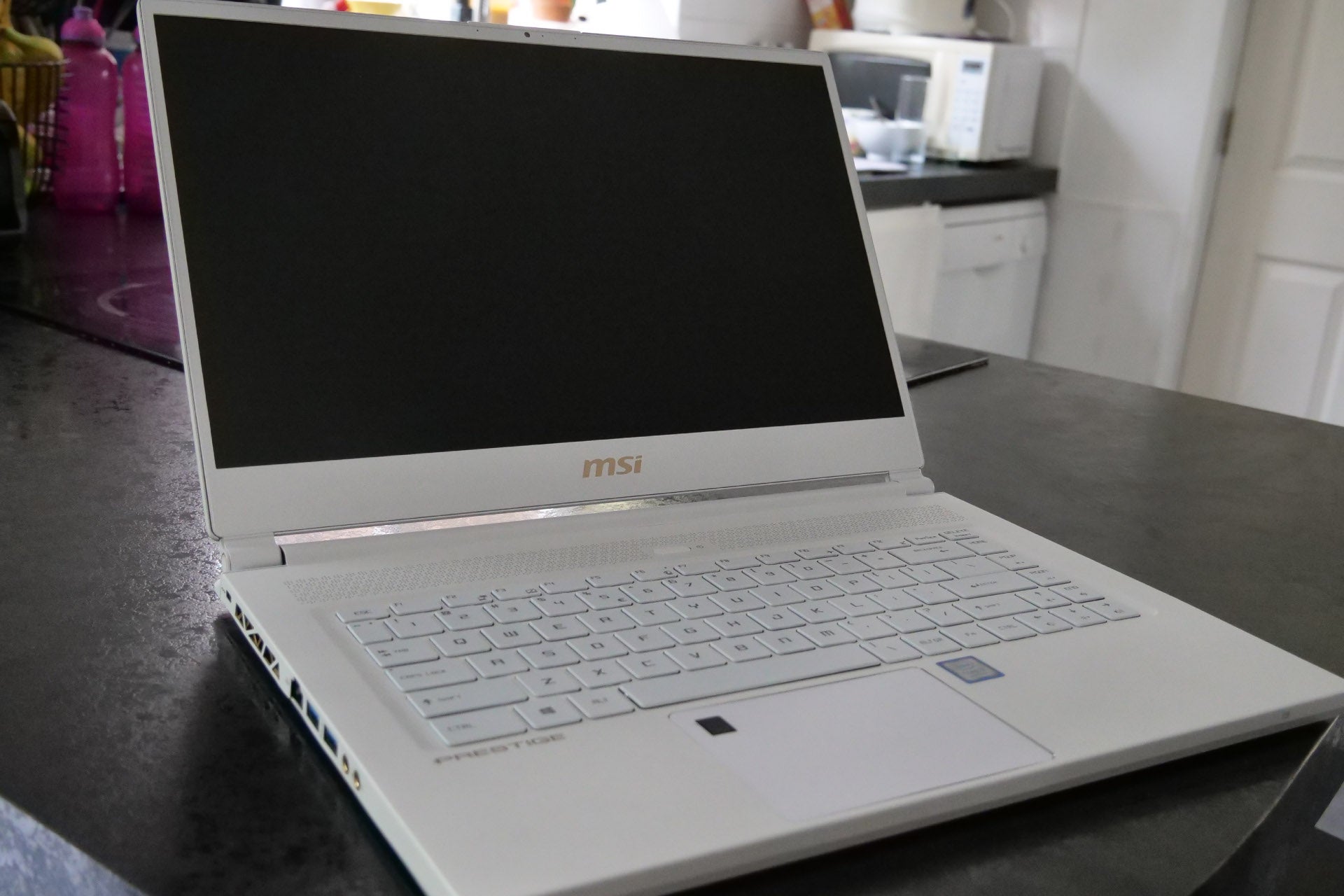 All white on the night – MSI has ditched the boring black and grey plastic look for the P65 Creator.

MSI has paid a lot of attention to presentation here with the P65 Creator 8RF. Our review sample arrived in a painted wooden box with the Dragon Army logo printed on the top. Open it up, and you’ll see the laptop and the mains adapter and charger sitting snugly in foam cutouts.

The metal body of the laptop is painted white, which makes it stand out from the regulation black and grey bores we typically see lined up on the shelves. While the P65 Creator isn’t quite as sleek or elegant as, say, a MacBook Pro (the overall build is quite boxy), it’s reasonably thin and light considering the meaty components packed inside. That 1.8kg chassis is 18mm thin, but you’ll definitely need a good-sized backpack to carry it around, as the other dimensions are far from compact.

MSI’s metal chassis feels reassuringly solid throughout. I couldn’t find any weak points, despite plenty of intense probing, and after a few days of use I’m yet to see any scratches appear on its pale surfaces. 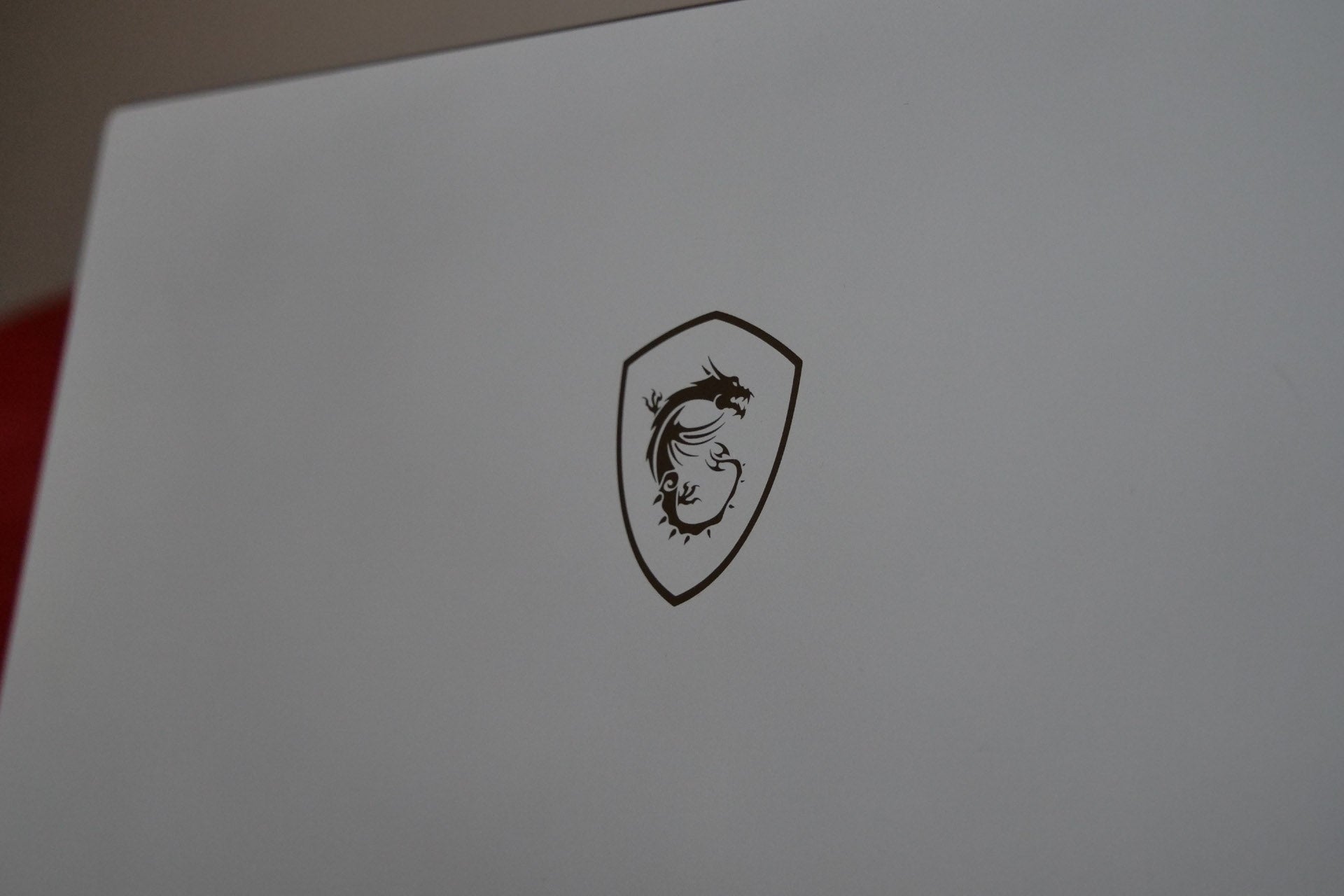 MSI’s sports car-esque dragon icon sits pretty on the back of the P65 Creator.

We reviewed the special limited edition white model (8RF), which doesn’t only boast a slick albino design, but you also get a fair few bonus features thrown in.

One of these extras is a Thunderbolt port, allowing you up to 40Gbps transfer speeds with compatible peripherals, as well as 4K output to an external display. These ports are still pretty rare on Windows laptops (as they’re super-expensive to implement), so it’s great to see one on this MSI laptop. In the normal Creator, this is replaced with a standard Type-C USB connection. 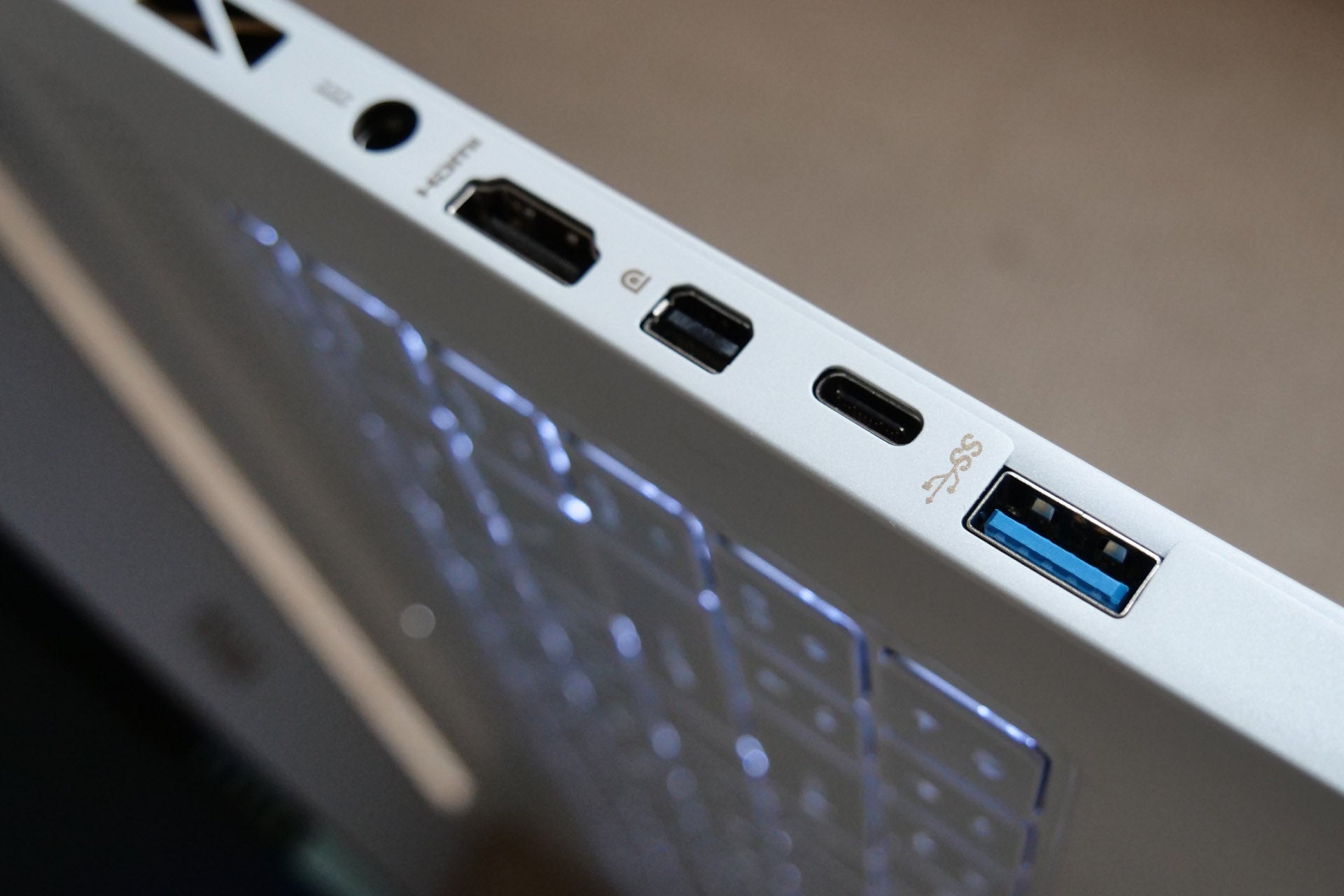 You get plenty of ports on the P65 Creator. L-R, power, HDMI, DisplayPort, USB-C, USB-A.

Besides that, you get a very healthy selection of other ports on all versions of the P65. These include three USB 3.1 connections, a mini-DisplayPort and HDMI, and even a proper Ethernet port.

I spend a good couple of hours each day smashing out reviews and the like, so one of the most important features for me is always the keyboard. Thankfully, the P65 Creator didn’t disappoint – although this board isn’t quite perfect either. 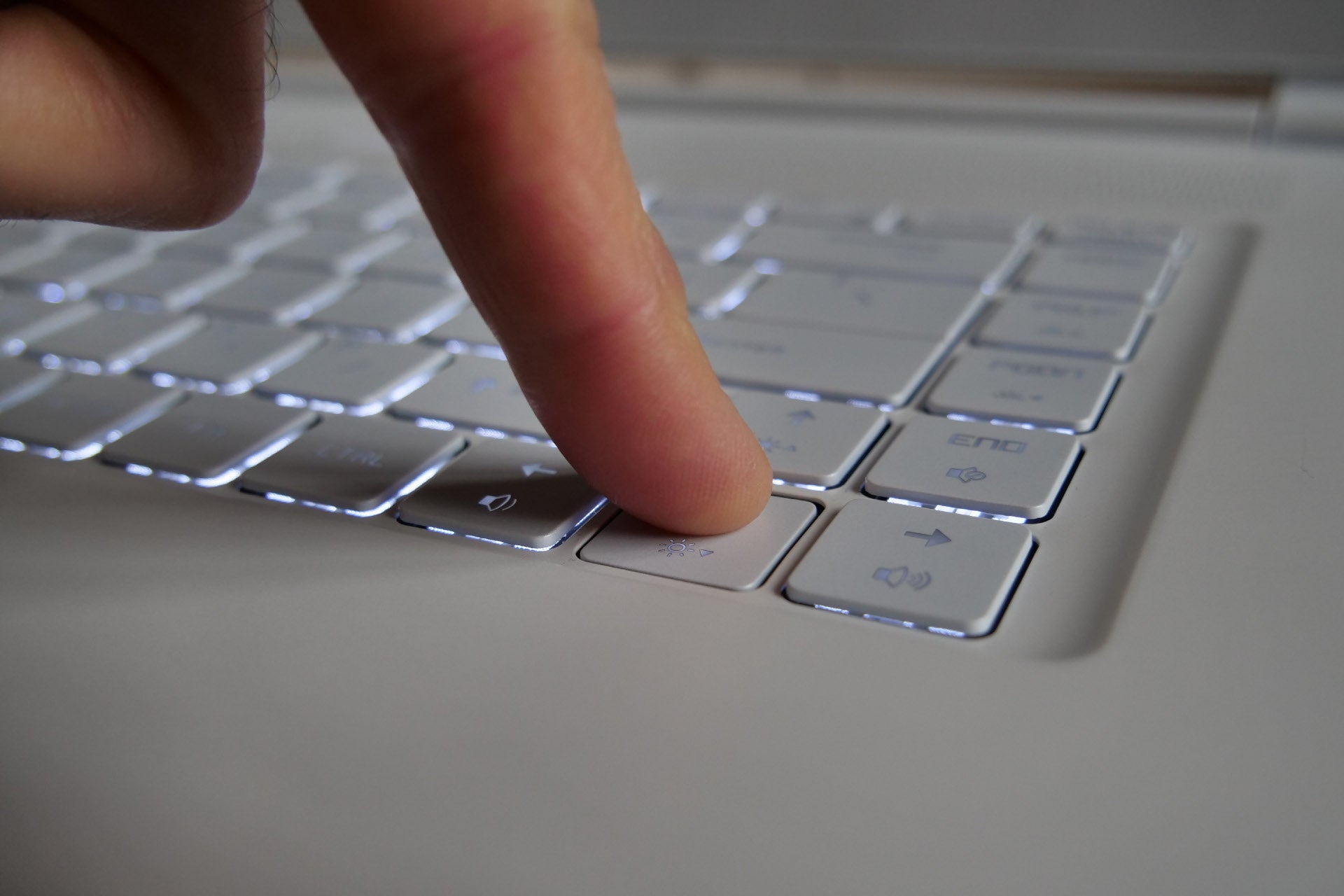 There’s virtually no travel on the P65 Creator’s keys and the layout’s not the smartest – but it’s comfortable enough for heavy work.

On the plus side, you get a spacious chiclet-style layout that’s well sized for touch-typing. Although the travel is a little thin, that keyboard is a perfectly comfortable for hammering out a few thousand words on a busy afternoon. It’s also fully backlit, as you’d expect, so you can work well into the small hours.

However, MSI has committed a cardinal sin for touch-typists – namely, slapping an extra row of buttons along the right edge. Here you’ll find the Home, End and Page Up/Page Down buttons, with no gap between them and the rest of the board.

As a result, every time I blindly smacked what I hoped was the Enter or Backspace keys, I ended up jumping my cursor all over the place. Cue some liberal use of a wide variety of good old-fashioned British curse words.

I addition, the Enter key has also been cramped into a single row. Given time, I’m sure I could get used to it, but if the layout had been configured a bit more savvily, I wouldn’t have to. 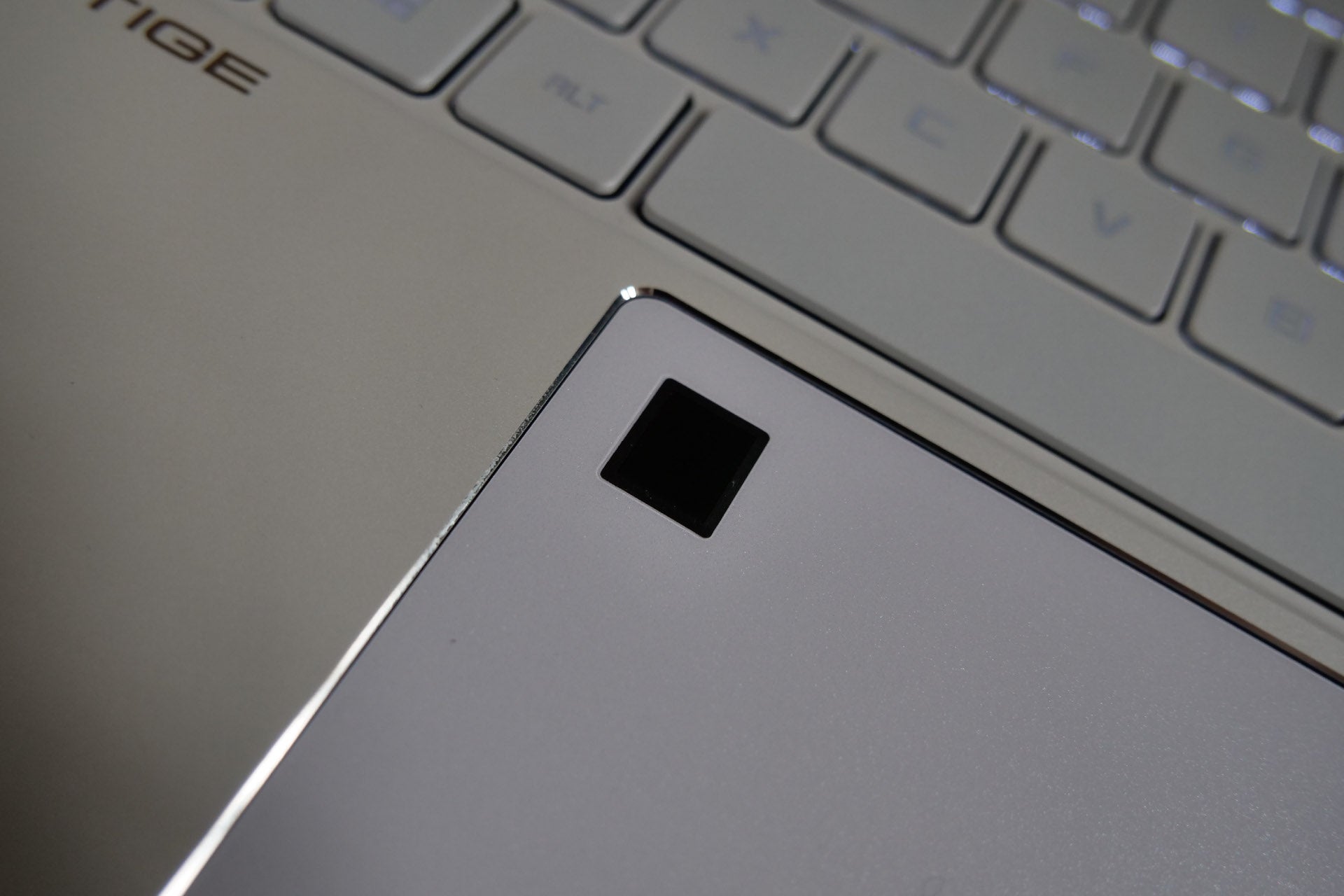 Curiously, MSI has opted to house the P65 Creator’s fingerprint scanner *in* the trackpad.

Beneath the keyboard you’ll find a generously sized touchpad, which isn’t too irritating to use. This pad is reasonably responsive to multi-touch gestures, although it’s also shunted towards the left edge of the palm rest, which meant, as a right-hander,  I was constantly right-clicking by accident. I’d definitely recommend connecting a mouse for any creative tasks whenever possible.

Built into the touchpad you’ll find a fingerprint sensor, compatible with Windows Hello. This works as expected, although note that it won’t play ball if your fingers are even slightly moist or greasy.

Another obviously important feature for any creative laptop is the display, and the MSI P65 Creator delivers (for the most part) with its 15.6-inch Full HD screen. This doesn’t quite cover the entire sRGB gamut (our tests returned a 83% result, along with 60.7% and 65.9% of the Adobe RGB and DCI-P3 colour spaces), but I’m happy enough with colour accuracy for video and photo editing. The 6700k temperature on default settings is close to optimal, although the 880:1 contrast ratio isn’t as strong as rivals such as the Dell XPS 13.

I experienced no major problems with clarity either, even if the 278 nits maximum brightness is a little below the 300 nit ideal. The anti-glare panel helps to limit pesky reflections, while the strong hinges allow you to tilt that display all the way back 180 degrees, to find the best possible viewing angle. 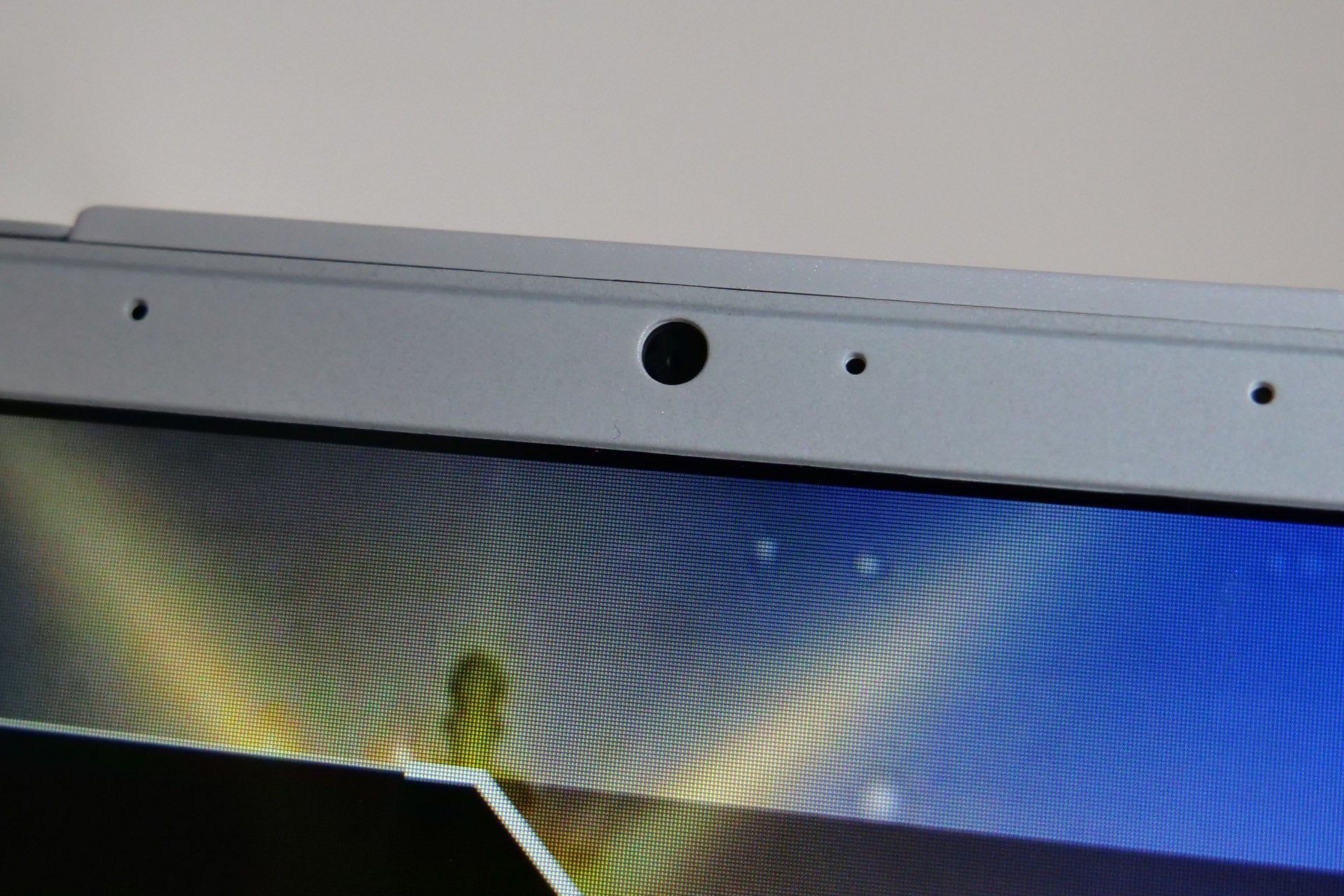 Given that the P65 is a laptop pitched at ‘creatives’, the low brightness and contrast ratio is puzzling.

With MSI’s ‘True Color’ software, you can tweak the brightness and colour output to suit the task at hand, be it browsing a spreadsheet late at night or kicking back with a flick. You have full manual control over this in the Dragon Center app, which comes pre-installed. The blue light filter mode is handy for evening sessions, but beyond that I preferred simply boosting or lowering the brightness myself using the keyboard shortcuts.

Gamers should be drawn to this white special edition version of the P65 Creator for a couple of reasons. One is the boosted GPU, but another fine feature is the 144Hz refresh rate of the display – something you don’t get with the standard silver effort. Supported games play with pleasing smoothness; we didn’t witness any tearing or other issues either.

If you fancy connecting some external displays, there’s good news. The P65 Creator can support two monitors up to 4K resolution in its standard silver form, while this limited edition white model can output to three at once. 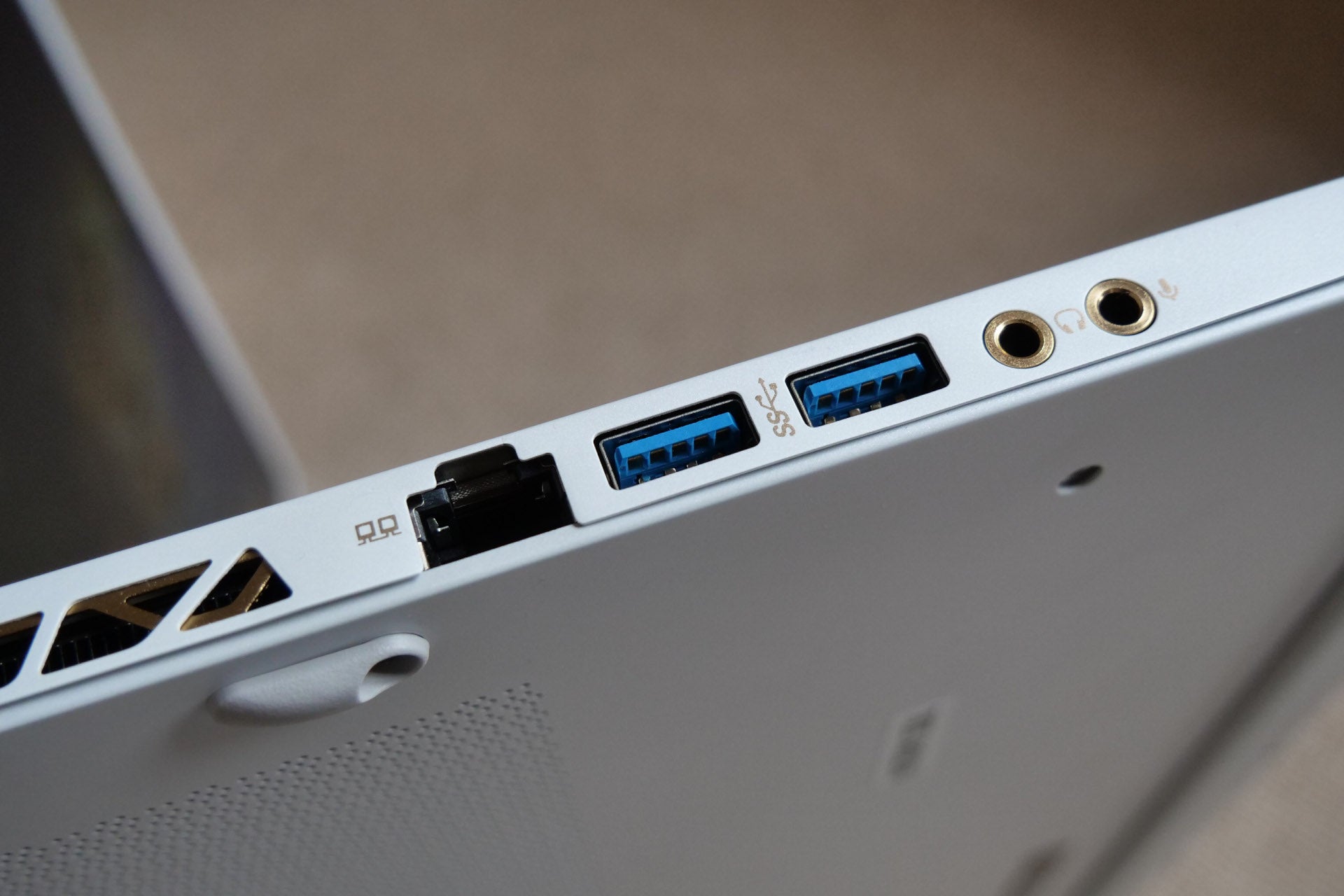 The P65’s wealth of ports give the LG Gram a run for its money. L-R, Ethernet, 2 x USB-A, 3.5mm headphone and microphone jacks.

Another benefit of this white model is its support for Hi-Res Audio playback. If you have some compatible headphones, the sound quality is top-notch. Bluetooth 5 is also on board for wireless streaming.

MSI’s built-in speaker is booming enough on top volume to make your media clear, even in noisy places. Most of the output seems to be blasted from a single bottom-mounted grille, although the audio is still clear (if not quite as loud) even when this area is smothered.

An Intel Coffee Lake chipset powers this MSI machine – namely, the Core i7-8750H clocked at 2.2GHz. With a backing of 16GB of RAM, everyday performance is super smooth, even when multi-tasking with a dozen apps open at once. In our PCMark benchmarking test, a varied stress test designed to gauge overall PC performance, I recorded a score of 3839.

For context, that score is above what we recorded on the very capable Microsoft Surface Pro 6 (3309) and the 14-inch LG Gram (3170) laptops, but below what we’d expect to see on performance gaming laptops like the Dell Alienware m15 (5053) Asus ROG Strix Scar II (5630). Given that the P65 Creator is creative device which sits somewhere in between premium performance laptops and gaming machines, this perhaps isn’t surprising.

The 500GB disk drive is pretty nippy, churning out scores of 1606MB/sec read and 1009MB/sec write speeds with CrystalDiskMark in our tests. Again, that’s roughly the same as what Trusted recorded with the Surface Pro 6 (read: 1640MB/sec, write: 807MB/sec), but, again, below what the Alienware M15 (read: 3121.6 MB/sec, write: 1141.2 MB/sec). Launching programs and large photo files in GIMP was quick enough. 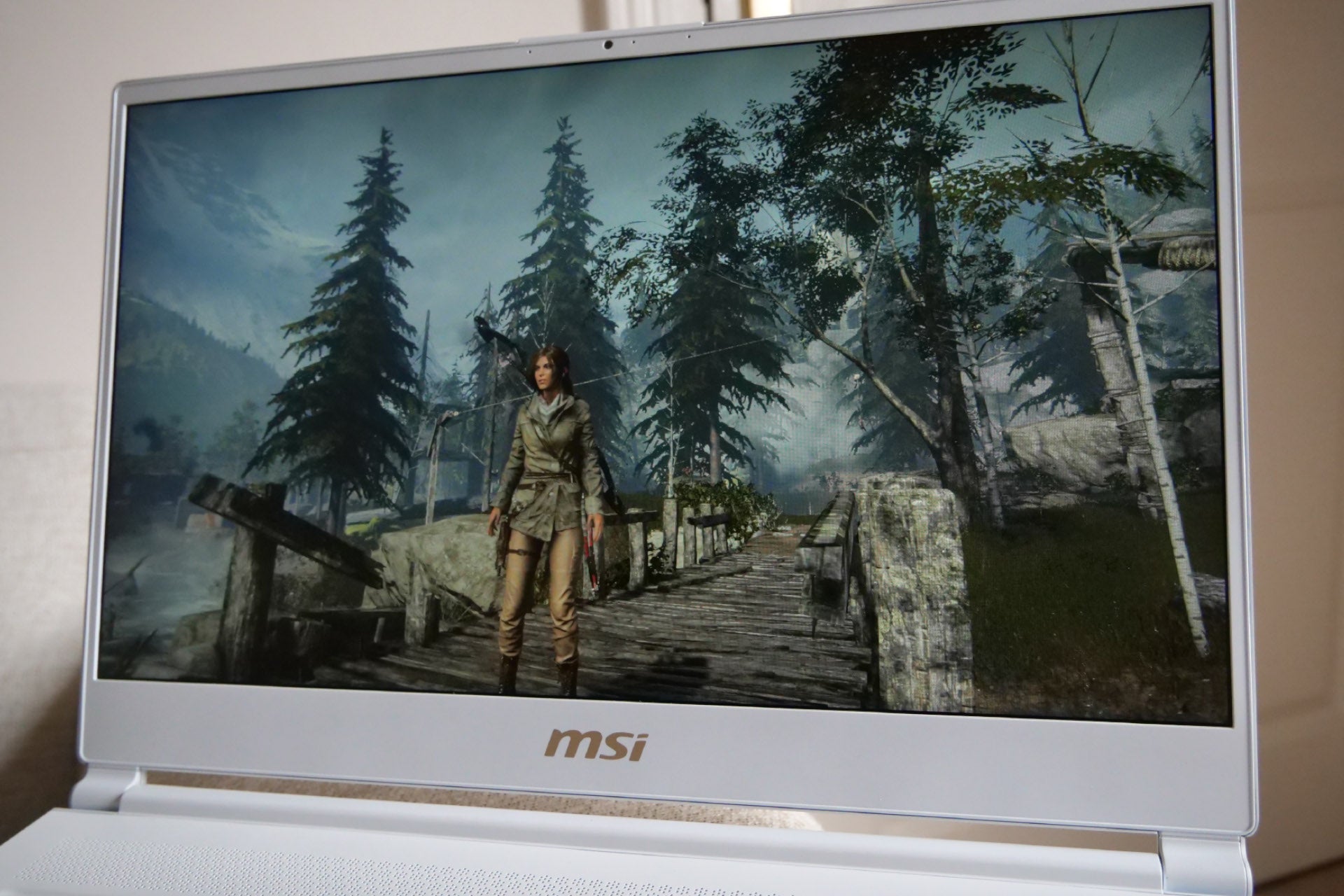 Despite the MSI brand being synonymous with gaming, the P65 Creator’s merely an OK gaming machine. They do say up front that this is a creative machine…

Nvidia’s GeForce GTX 1070 delivers a strong graphical performance when it counts. The latest Steam games played with a consistent frame rate, while the 3DMark benchmarking tests threw out pretty consistent results for a gaming or creative laptop. I recorded 12,668 with FireStrike, more or less on par with what Trusted Reviews recorded on the Razer Blade 15 (11,624) and the Alienware m15 (13,608).

I certainly had no issues with photo or video editing using standard apps like GIMP and Filmora. Three internal fans and four heat pipes work together to keep everything cool and drive warm air out of the laptop and avoid throttling. This setup seemed to do the job, as even gaming with the P65 on my lap for a full hour or more didn’t result in any discomfort. I didn’t see any drop in performance over time, even with demanding titles. 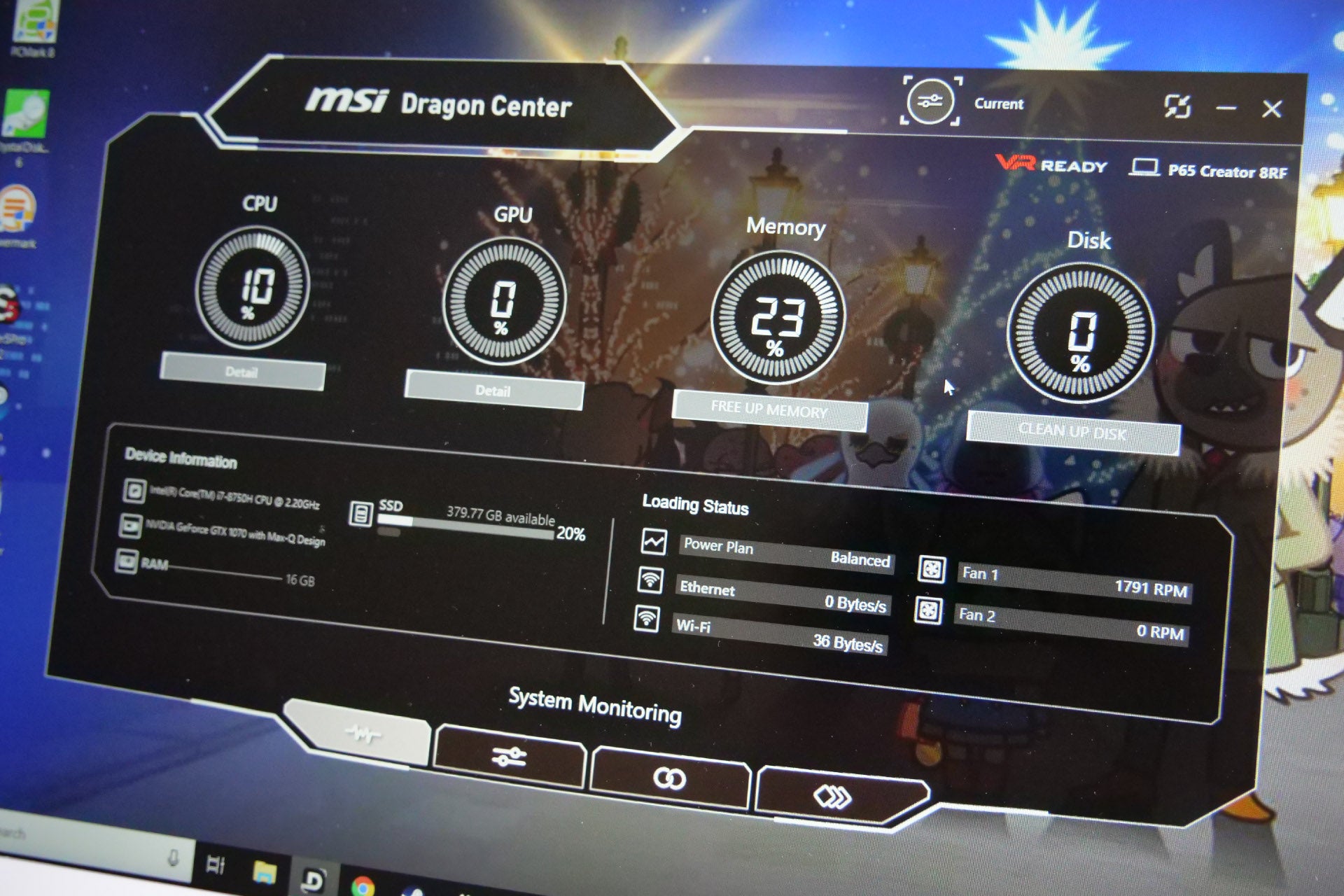 The Dragon Center app is where you’ll be able to get a quick eye-over how taxed the P65 Creator’s resources are.

Although MSI reckons you’ll get “up to 8 hours” of use from a single charge, I found the Creator often died far sooner with regular use. Even when I was simply working in the Chrome browser, this laptop usually lasted between 4.5 and 5 hours before fizzling out.

Still, the good news is that heavier tasks such as video editing didn’t drain the P65 that much faster, so you’ll still get a few hours of play without the charger.

In the standard Trusted Reviews benchmarking test (which involves a constant loop of video playback and web browsing), the laptop again lasted just over 4.5 hours. While MSI isn’t strictly pitching the P65 Creator as a gaming laptop, 4-5 hours of power is about the norm for gaming devices.

Despite sporting a name that sounds like a Government tax form, the P65 Creator is a very interesting creative laptop. In most areas it succeeds, boasting dependable performance, a crisp and colourful display and impressive connectivity. I’d tweak a few little features here and there, but overall I’d be happy to pack this MSI machine in my bag every day.

A solid Windows alternative to the MacBook Pro for creative professionals.