The XPS 15 2-in-1 is one of the most interesting laptops to arrive this year for a number of reasons, chief of which is its Intel G Series CPU.

The G Series CPU is the result an unholy union between Intel and AMD. It pairs Intel’s Kaby Lake CPU architecture with AMD Vega graphics and means the XPS 15 2-in-1 is surprisingly capable at gaming, despite the lack of a dGPU.

This, plus the addition of a new magnetic keyboard that rivals the Macbook Pro’s butterfly switches for comfort, and one of the best laptop screens I’ve tested in recent memory, make the XPS 15 one of the best Ultrabooks around. 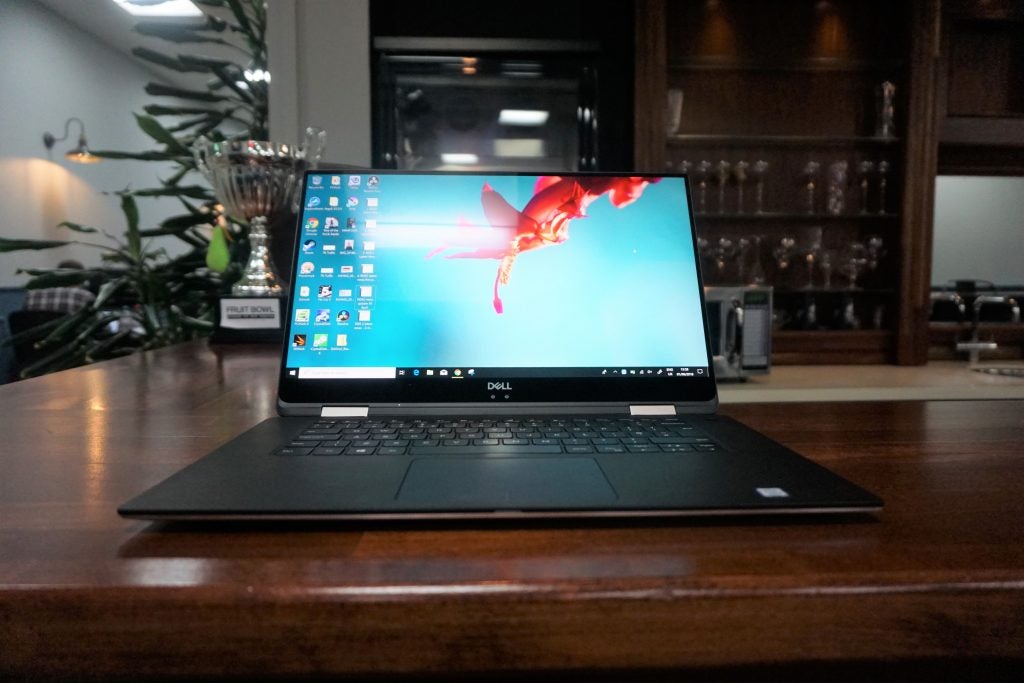 The XPS 15 2-in-1 doesn’t reinvent the wheel and at first glance has a near identical ‘InfinityEdge’ design to Dell’s last 15-inch Ultrabook, which in my mind is no bad thing. The silver brushed metal chassis and the woven glass-fibre finish surrounding the keyboard and trackpad are identical to the 2018 XPS 13’s and give it the same classy feel. Build quality also remains excellent as a result.

The only minor design issues remain the oddly placed front camera and slightly limited connectivity. Like the XPS 13, the 15 2-in-1’s 720p rear camera sits below the screen and gives any video callers a lovely view of your nostrils. The lack of any full-sized USB, display or HDMI ports will also be a problem for people still using old peripherals. For everyone else, the two Thunderbolt 3 and two USB-C 3.1 connections will be more than adequate, however.

Up close, though, you’ll spot a number of subtle but useful design changes. First off, Dell have added a Lenovo Yoga 920-style 360 hinge that lets you turn the laptop into a tablet by folding the screen all the way round.

This sounds small, but coupled with Dell’s optional active stylus, it makes the XPS 15 2-in-1 an enticing option for digital artists or creatives on the market for a mobile work or sketch station.

The redesigned cooling system, which uses a custom Gore thermal insulator to direct heat towards the fans, also means the laptop is surprisingly light for a 15-inch Ultrabook, weighing in at just 2kg. 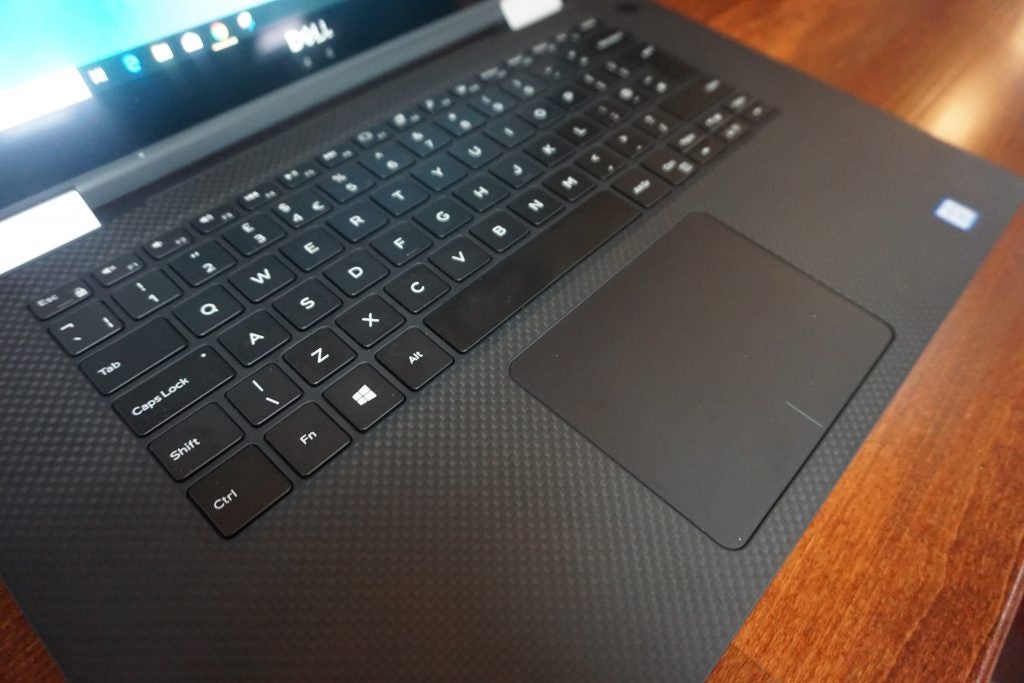 The keyboard has also been completely redesigned. According to Dell, the new keyboard uses custom Maglev tech found in high-speed trains. Specifically it replaces the domed membraned switches found on most laptops with a system of ‘rare Earth-magnets’. This reduces the number of physical parts moving in the keyboard, meaning it should, in theory, last longer.

I’ve only had the XPS 15 2-in-1 for a fortnight, so I can’t sensibly comment on its longevity. I can, however, confirm it offers one of the best typing experiences I’ve seen on a laptop in quite some time.

The keyboard has a tiny 0.7mm travel, but despite this, each key offers a wonderfully tactile click action when pressed. This plus a rapid reset make the keyboard feel significantly more reactive and pleasant to type on than 99% of the laptops I test. I’d go so far as to say I prefer them to the butterfly switches seen on the Macbook Pro, which were previously my favourite.

As with all the recent XPS laptops I’ve tested, the 15 2-in-1’s glass-coated, Microsoft Precision touchpad is also excellent. The pad’s suitably sizeable and one of the most reactive and accurate you’ll find on a Windows laptop. 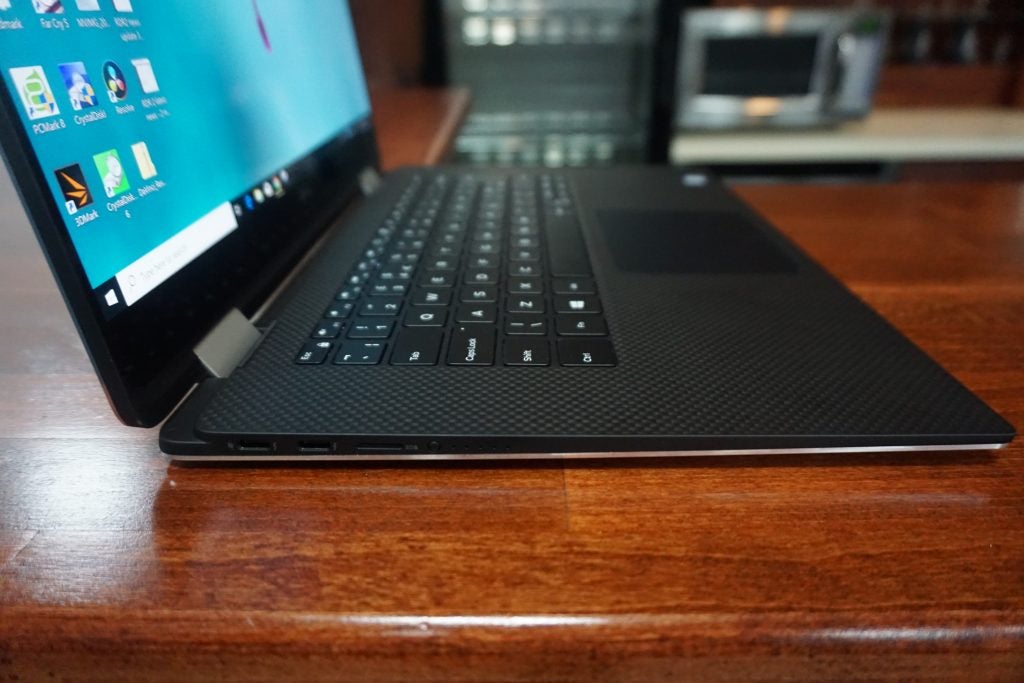 Display tech is another key area where the XPS 15 2-in-1 excels. The 15-inch touchscreen comes in 4K and 1080p resolution options. The 4K model I reviewed performed excellently during my synthetic screen tests.

The 0.2865nits black level, coupled with its 450.89 maximum brightness, adds up to a super impressive 1574:1 contrast ratio. This makes the screen wonderfully vibrant and excellent for movie binges. The 6735K colour temperature is a little cooler than the 6500k ideal, but not to the point where the screen looks unrealistic or dull.

For creatives, colour range is also excellent. My tests showed the screen covered 99.9% of the bog standard sRGB gamut. But what’s seriously impressive is its 94.2% Adobe RGB and 85.2% DCI-P3 coverage. The two gamuts are generally favoured by artists and filmmakers where accurate colour representation is key.

These stats are among the best I’ve seen on a Windows laptop. The only other device I’ve tested to match them is the Macbook Pro, which was previously our top choice for creatives. 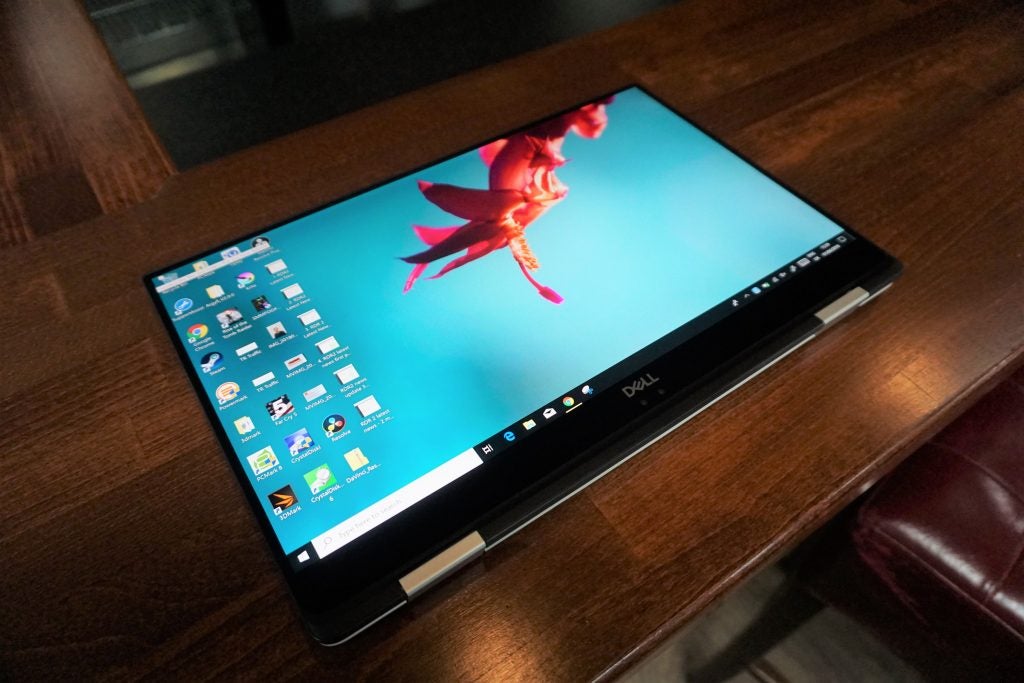 Performance will vary depending on which model of the XPS 15 2-in-1 you get. You can see the various configuration options in the table below.

The top specced version I tested, which comes with an Intel Core i7, 16GB DDR4 RAM and a 1TB PCIe SSD, performed very well during my tests.

Its PCMark 8 and Geekbench 4 scores put it on a par with competing top-end Ultrabooks and gaming notebooks such as the Macbook Pro when it comes to CPU performance.

The 3DMark score is also surprisingly good and easily beats one of its closest rivals, the Surface Book 2, on graphics performance.

Its Crystal Mark 2976.7MB/s read and 520.2MB/s write scores are also top notch for a Windows machine, though they don’t quite match the Macbook Pro or Surface Book 2’s.

With real world use it matched its synthetic benchmark scores. The laptop easily dealt with large, multi-layer digital painting and photography projects with few issues. 3D modelling in Blender was also a blast and I never experienced any serious slowdown on regular sized projects. The same was true when video editing.

Gaming performance was also surprisingly good. During my time with the XPS 15 2-in-1 I was able to get triple-A titles, including Rise of the Tomb Raider, Destiny 2 and Overwatch, running on the machine at playable, 45fps-plus frame rates at 1080p – though some graphics settings had to be toned down.

However, be warned that intensive tasks put a serious drain on the XPS 15 2-in-1’s custom Gore cooling system.

The system is excellent on paper and uses a custom Gore thermal insulator to direct heat towards the fans at its back. Yet when playing a few rounds of Destiny 2 with the XPS connected to the mains, the laptop’s fans whirred into overdrive and were creating an outright cacophony that rivalled some gaming laptops’ volume.

Battery life is also a little shorter than I’d like. The 75WHr battery generally lasts a full work day with moderate use.

Moderate use entailed using the XPS 15 2-in-1 as my main work and personal laptop. On an average day this included word processing and web browsing throughout the day, plus the odd smidgen of photo editing and video playback.

But running our synthetic battery test, which involved looping five minutes’ video playback and 10 minutes’ web browsing with the screen set to 150nits, it never lasted more than six hours. Most other Ultrabooks in the same size bracket manage at least an hour longer running the same test.

Video playback and gaming also severely impact the convertible’s battery life. Travelling on a long train journey, the laptop died less than four hours in, after a solid session of Netflix binging and gaming. 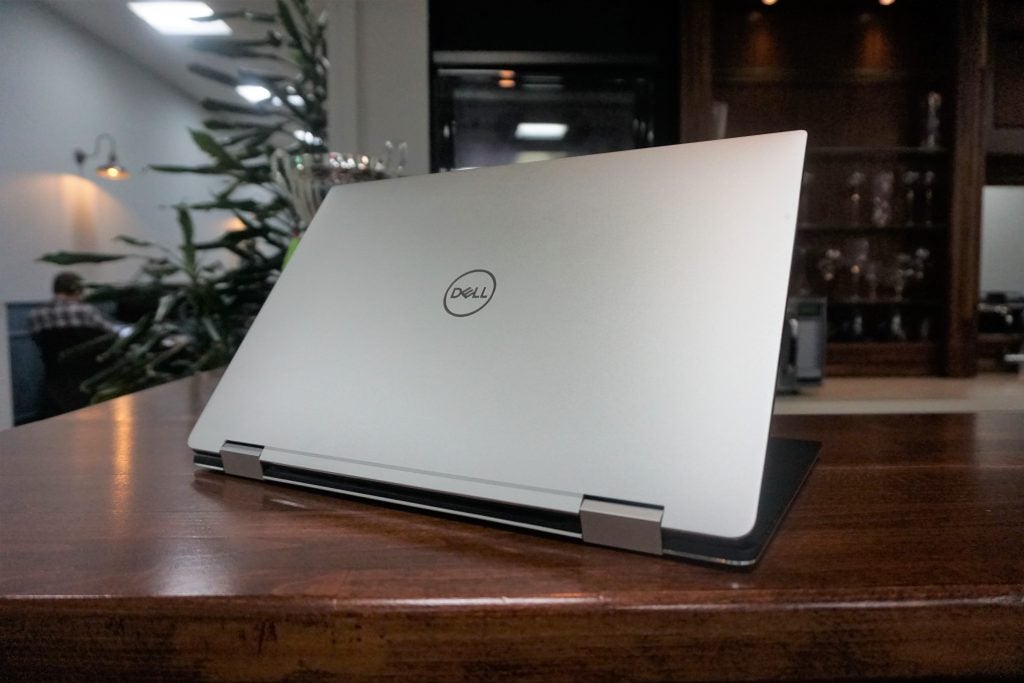 If you’re after an all round excellent, big-screen Windows 10 laptop, you’ll struggle to do better.

Dell hasn’t tweaked the outer design that much, but the improvements it has made to the XPS 15 2-in-1’s keyboard and screen are subtle but important upgrades. Add to this the new G Series CPU and graphics options and the laptop easily earns its place as one of 2018’s best Ultrabooks.

Were it not for its slightly lacklustre battery life and noisy performance during intensive tasks, this would be the perfect Windows 10 laptop.

One of the best 15-inch Windows 10 laptops money can buy.