Sometimes it feels like the VR revolution has stalled, our early enthusiasm for the medium drowned by a mass of me-too shooting galleries and high-profile disappointments. Fortunately, there are still some games coming out that revive your interest and make you see what VR can do in the hands of a creative studio.

Moss is one of the special ones.

We missed it on its initial digital-only PSVR release, but it’s now having a physical re-release along with a PC version. Lucky Oculus Rift and HTC Vive owners get a game with slightly crisper, more detailed visuals, but Moss is a fantastic title, whatever platform you play it on. In a way, it’s nothing more than your basic 3D platform adventure game, with a cute mouse hero, a fantasy quest storyline and a nice mix of combat, puzzles, and traversal. What makes Moss special is the way it harnesses the power of VR.

For a start, you don’t just control your rodent heroine, Quill, from a distant third-person perspective, but take an active role in the adventure too, interacting with her enemies and with glowing elements of the scenery to thwart attacks, shift obstacles, move platforms around and shield Quill from danger. All it takes is the motion of the Dualshock 4 in 3D space, along with some squeezing of the triggers. 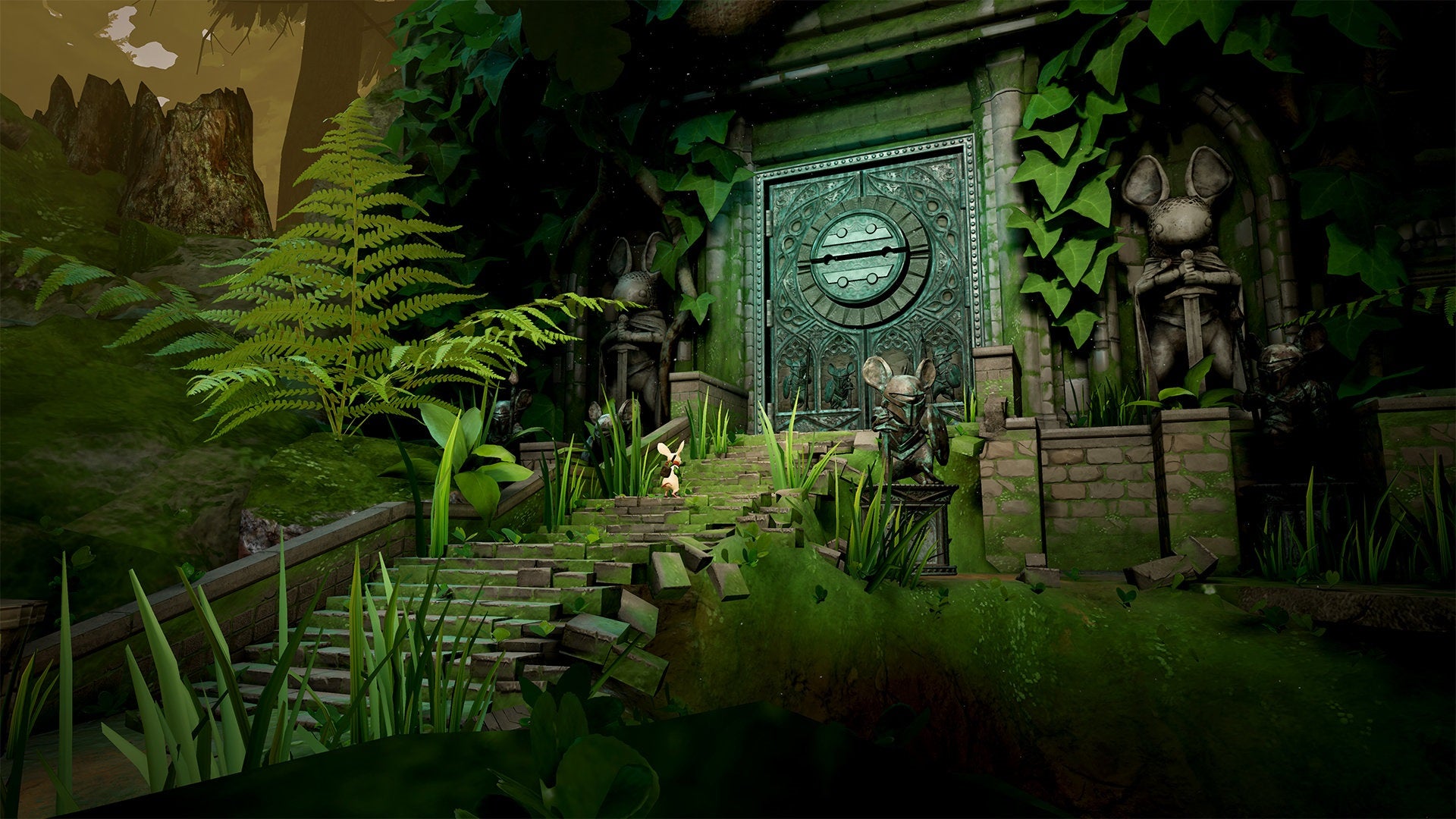 Moss really pulls you into the action, so it’s less like looking at a screen or through a window, and more like being a giant-sized observer inside the mouse-scale scene, stretched out like some ingenious animated model all around you. You can peer around, over, under and even through the scenery, turning your head to keep Quill in the frame as she races around, occasionally even shifting position to get a better view. There are times when your view is obstructed, but Moss covers this through the use of a glowing blue outline that shows you where Quill is behind the scenery.

As an experience, it’s magical – easily one of the best and most immersive that I’ve had in VR. And the game doesn’t just play with it but embraces it, using your sense of being in the world to tell the story. You are the Reader, both witnessing and participating in the narrative, and so the game works to build a relationship between you and your tiny mouse friend.

This becomes part and parcel of the gameplay. True, some of the jumping around and swashbuckling combat would have worked in a conventional 2D game, but Moss is at its best when you’re trying to help Quill while simultaneously playing your role, raising and lowering platforms as she reaches them or operating strange mechanisms to help her on her journey. Even when she’s fighting, you can help, temporarily paralysing or even using the powers of her enemies against them. You even need to trigger the most annoying, exploding varmints so that they blow before they get too near. 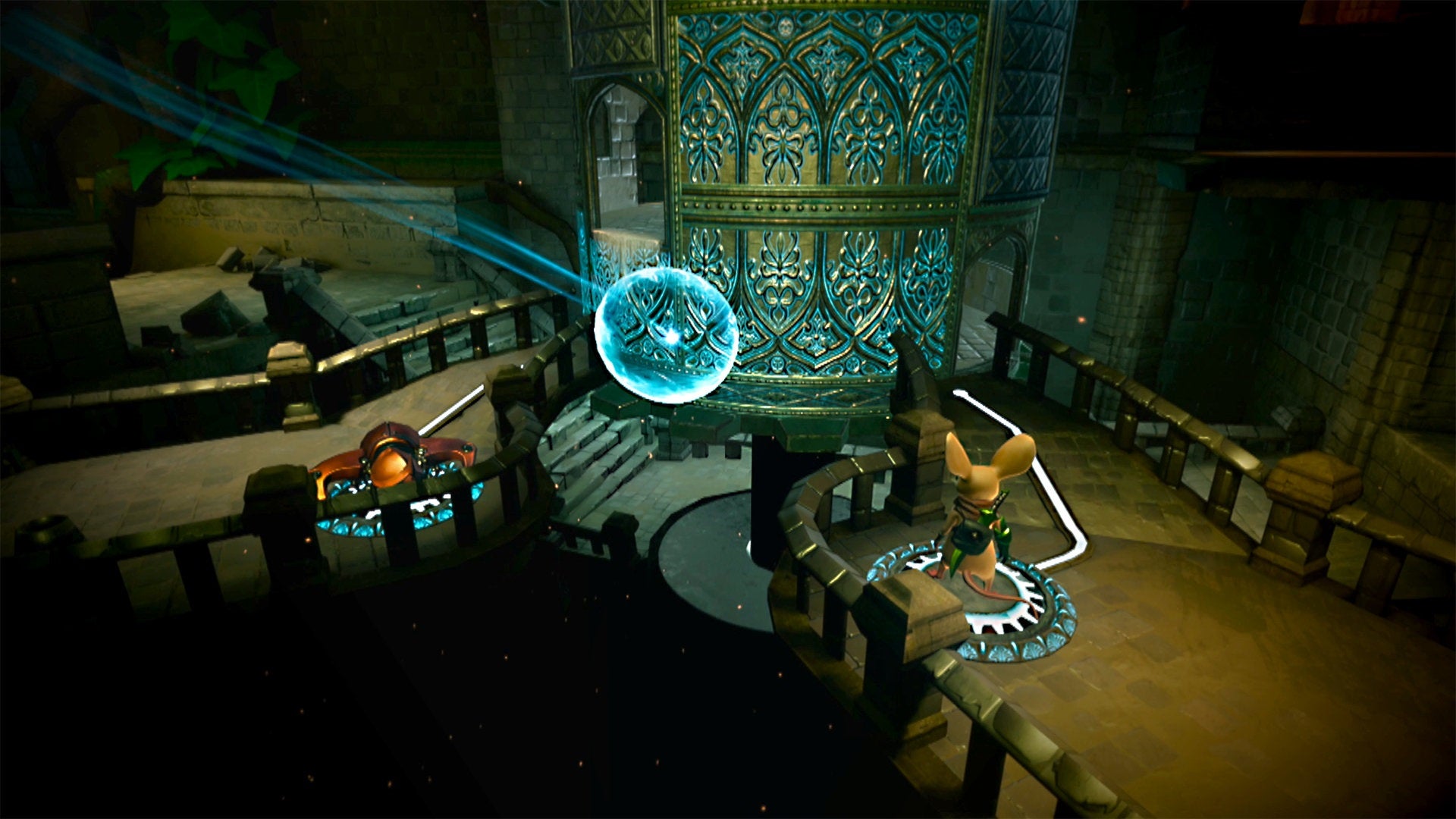 The puzzles, meanwhile, grow ever more ingenious as the game goes on. Manipulating platforms and pulling on titanic chains is just the start; there are some fabulously convoluted conundrums involved in helping Quill reach chests or switches, not to mention some brilliant extended efforts around helping Quill get to her objectives under the watchful gaze of a deadly mechanical eye.

Most of all, though, this is a work of real artistry. Not only is Quill beautifully animated, but the forests, mines and crumbling ruins she visits are fascinating, at times bringing to mind Team Ico’s work or last year’s Rime. From the score to the voicework to the page-turning picture book cut-scenes, Moss feels somehow enchanted.

At times the spell breaks. You’ll soon notice that there are only a handful of monsters, while a handful of combat sequences turn into a kind of annoying pandemonium. Luckily, these points are few and far between. The worse thing you can say about Moss is that it’s short – you’ll clock it in under five hours – but it’s a bit of a case of forget the quantity and feel the magic; this is one of those VR experiences you just have to have.

Who’d have thought this under-hyped mouse tale would be one of the best VR games around? Moss is brilliant and inventive in the way it applies VR to the 3D platform adventure, crafting something strange and magical out of familiar ingredients. It’s short, but beautifully-paced and utterly charming. Whatever VR platform you’re packing, you ought to play it.