What is the Mifa M1?

Billed as the world’s smallest stereo Bluetooth speaker, the Mifa M1 (also referred to as the Pocket Max Boom) offers an ideal way of listening to music when you’re out and about. Packed into its tiny frame are two drivers and a bass radiator, potentially offering a bigger sound than you’d normally get from a speaker of this size.

On the face of it, the M1 looks like just another cheap Chinese Bluetooth speaker, but on closer inspection you’ll uncover a highly appealing feature list and impressive attention to detail. Let’s find out if it has the performance to match. 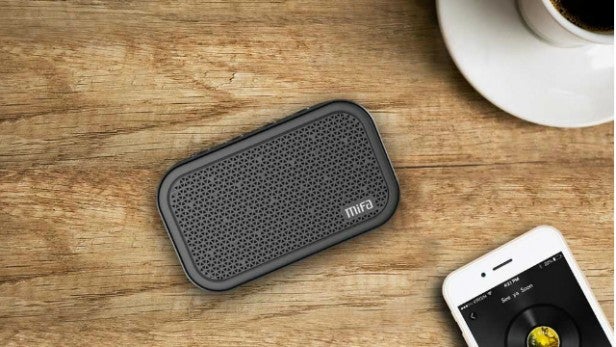 Look up “compact” in the dictionary and the definition you find describes the M1’s design to a tee. The unit measures a mere 105 x 64 x 40mm and weighs a pocket-friendly 225g – it’s virtually begging to be taken out on picnics and camping trips. 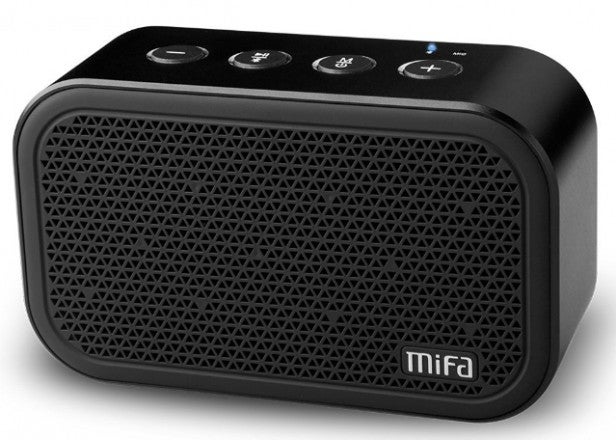 The M1’s compact size is only part of the its appeal, however. Equally impressive is its construction, with an aluminium alloy frame and ABS panels giving it a solid, weighty feel in the hand. It’s beautifully made and stylish too – the curved sides, spangled silver finish and triangular grilles are elegant and eye-catching.

It’s available in a choice of six colours: black, silver, white, turquoise, yellow or pink. They’re all attractive, but the silver sample is by far the classiest.

On top is a row of four firm, round buttons. They all have dual functions; hold down the plus and minus keys to adjust the volume or press them once to skip tracks. Another button pauses the track and launches Bluetooth pairing, while the remaining button handles power and mode selection. It’s a little clumsy, and the pause button didn’t work with my iPod, but you’ll get the hang of it.

Also on top is a small LED that lights solid blue to indicate a successful Bluetooth connection and flashes while pairing. Next to it sits a built-in noise-cancelling microphone that allows you to take phone calls hands-free. Under a rubber cover on the back is a microSD card slot – more on that in a minute – and a USB 2.0 charging port.

The M1 uses a Bluetooth 4.0 chipset and a polymer-lithium battery that offers up to eight hours of playback time from a full charge. The lack of NFC is a pity – particularly since it’s found on the identically priced Sond Audio speaker – but isn’t a deal-breaker. 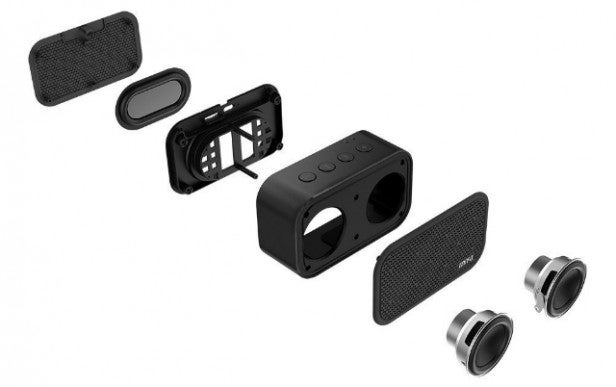 There are dual 1.5in speaker drivers and a passive radiator to give bass frequencies a boost by responding to the air movement of the main drivers. Quoted power output is 2 x 3W.

The microSD card reader on the back allows you to load cards up to 32GB and play lossless FLAC and WAV files, as well as MP3, WMA and APE. That’s a terrific feature, allowing you to keep your favourite albums loaded at all times. 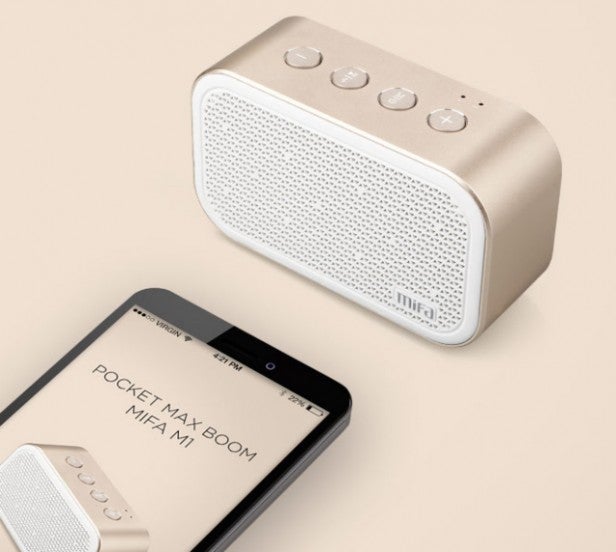 There’s even a smartphone app that allows you to browse music stored or your phone or a loaded microSD card. It also turns the M1 into an alarm clock. You can download it from the App Store for iOS but it isn’t on the Google Play Store – you’ll need to download the Android version from the Mifa website.

The app looks basic and has a few typos (“bringthness setting”), but on the whole it’s easy to navigate and makes a fun if superfluous companion for the speaker.

In fact, the M1 is a joy to use. When you pair your device it gives off a cheery chime, followed by a deep American voice that says “Bluetooth enabled”. It plays a different one when it goes to sleep. It’s these little things that make a big difference.

Don’t be fooled by the M1’s pocket-sized dimensions; it offers a pleasingly loud and confident sound. The dual drivers project music clearly, it shows reasonable poise when pushed, and the bass radiator does a better job of bulking up bass than you might expect from such a small enclosure. 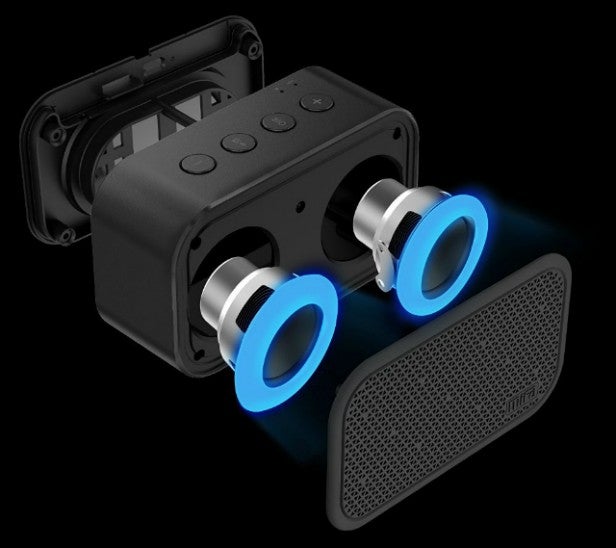 Inevitably the M1 is lacking in certain areas – there’s only so much a speaker of this size and price can do – but it more than passes muster as a camping companion.

Tonally, the balance is very much tipped towards the treble end of the spectrum. High frequencies are crisp and prominent, much more so than LG’s ART51 or Sond Audio’s Bluetooth speaker. As a result, you get perky hi-hats, crisp snare drums and discernible melodies, making music easy to hear over party chatter or ambient noise. 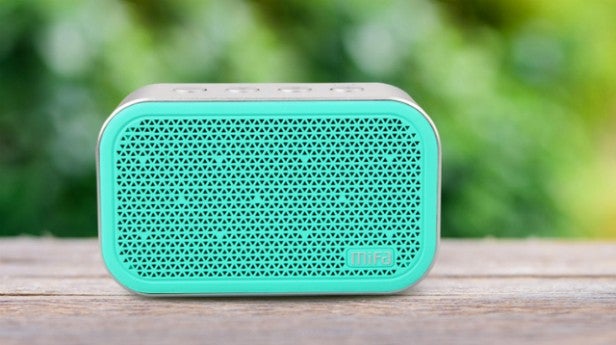 That said, piercing brass riffs and guitar solos can sound a bit spiky, and the M1’s sharp presentation becomes tiring after a while. Like many budget Bluetooth speakers, there’s a lack of mid-range meat to balance it out – the sound is all bass and treble, and vocals and instruments sound like pale imitations of the real thing. Yes, you can hear the mid-range elements, but there’s no warmth or soul behind them.

And while the M1’s passive radiator does make basslines and kick drums more solid, it can’t work miracles. The limited dynamic range leaves the M1’s sound lacking depth and heft, bringing even more attention to those sharp high frequencies.

Perhaps we’re asking too much from such a small, affordable speaker, but rivals such as the Jam Heavy Metal HX-P920, LG ART51 and Ultimate Ears Boom 2 offer a much better balance – provided you’re willing to up your budget slightly. However, the M1 is absolutely fine for casual background listening while you’re out and about, particularly at such a wallet-friendly price. 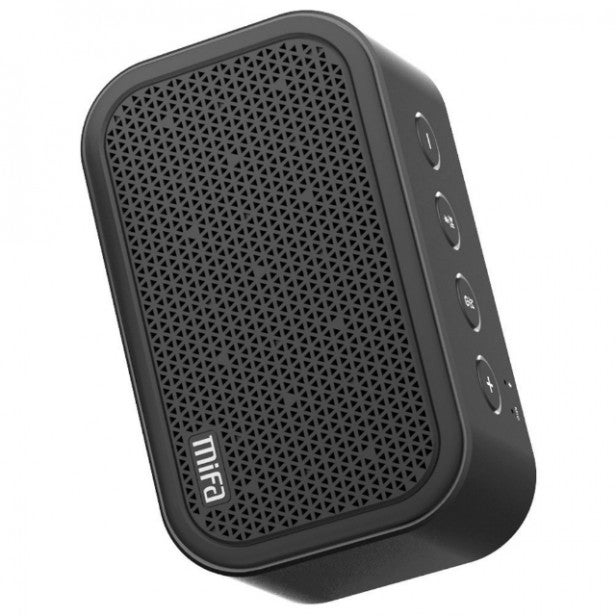 Should I buy the Mifa M1?

At this price, it’s difficult not to recommend a portable speaker with such an appealing spec. The M1 offers decent stereo sound from a ridiculously small enclosure, with stylish metal bodywork and a microSD card for local music playback.

There’s decent battery life too and even a nifty smartphone app. Sure, it suffers some of the classic portable speaker shortcomings – limited bass and thin mid-range – but the clear, crisp sound is actually better than expected and ideal for outdoor use.

A great-value Bluetooth speaker with some nifty features and impressive build quality, hampered by a lack of bass and thin mid-range.