Hands-on with the McLaren Edition of the excellent OnePlus 6T

The OnePlus 6T McLaren Edition launched at the tail end of 2018, bringing with it enhanced aesthetics, super-fast charging technology and extra oomph to the already excellent OnePlus 6T. Are the upgrades worth up to £150 more though? That depends on how you look at it.

The OnePlus 6T McLaren Edition is undoubtedly the best-looking version of the 6T we’ve seen. The standard 6T is available in Midnight Black, Mirror Black and Thunder Purple, but none of these can stand up to the McLaren-branded model. 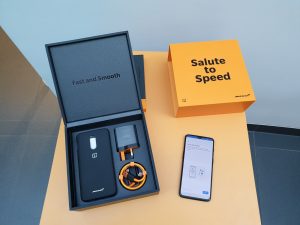 From the front, it looks identical to the others but the real magic is around the back. The handset’s glossy rear side is coated in glass but there’s a subtle patterned layer below it, apparently based on McLaren’s carbon fibre.

The Papaya Orange “go faster” stripe −my words, not OnePlus’ − that streaks around the bottom edge and sides of the handset are what really makes it stand out though.

There’s a McLaren logo on board too, which is there to honour the partnership and appeal to car fanatics, but it’s nice and subtle, sitting towards the bottom of the device in grey print.

Unfortunately though, the McLaren Edition’s two other headline features are things I’ve been unable to test so far.

‘’Warp Charge 30’ is the biggie, and lets you get up to a day of power from just 20 minutes of charging time, according to OnePlus. That’s down from 30 minutes on the regular 6T, but we haven’t yet had the chance to try it out.

In the box, however, you get a Warp Charge 30 power unit and a Papaya Orange braided cord cable, as well as a McLaren-branded case. 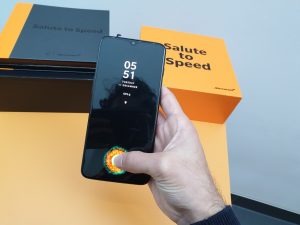 10GB of RAM −up from 8GB on the regular 6T −is the other headline feature, but once again we’ll have to spend more time with the McLaren Edition to establish whether or not the extra 2GB makes any sort of a difference.

Beyond this, its spec sheet matches that of the top-end OnePlus 6T.

Suffice to say, it’s a combination of features that we like very much. In our 4.5/5 OnePlus 6T review, we wrote: “The OnePlus 6T brings new technology and worthwhile improvements to the table making this the best phone from OnePlus yet.”

While we praised the handset for its excellent performance and battery life, Screen Unlock and slick interface, we were slightly underwhelmed by its camera and speakers. 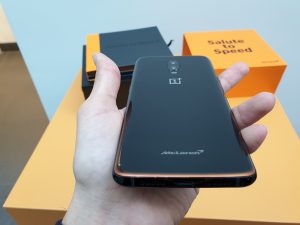 That’s £150 more than the entry-level model. However, it’s the top-spec model we should really be comparing this against.

For some, OnePlus is asking consumers to pay £70 extra for a tweaked design, faster charging and an unnecessarily large amount of RAM. In other words, it’s not worth upgrading to from the regular 6T, or possibly even the OnePlus 6.

However, when you consider that the iPhone XR starts at £749 for the 64GB model, with that price going up to a whopping £899 for 256GB. Simply put, the OnePlus 6T McLaren Edition is pricier than the 6T, but it’s a heck of a lot more affordable than other flagships on the market.