Marvel Ultimate Alliance 3 is a budget reimagining of a fan-favourite series that fails to live up to the heights of the franchise. It plays and looks like a last-gen game; it was a struggle to plow through the game, even for review purposes.

“I don’t see any other doors,” says Iron Fist, as we come up against one of the ninja clan The Hand’s nefarious traps. “We’ll have to solve this puzzle if we want to get through the door.”

The statues are a few centimetres away from glowing floor tiles. Push the statues onto the lit-up floor and before you know it, the door is open. I guess The Hand’s grandmaster of puzzles was dealing with some budget cuts.

He isn’t the only one. While there’s a certain charm to Marvel Ultimate Alliance 3: The Black Order, it reeks of cut corners and systems not explored. It’s a game that will provide fan-service to supporters of Marvel’s recent output in comics, films and TV, but will leave those old enough to remember the stellar X-Men Legends and earlier titles in the Marvel: Ultimate Alliance franchise with disappointment of superhuman proportions.

It’s been a decade since our previous entry in the Ultimate Alliance franchise, and the reason for its rebirth – and soft reboot – now is simple: since 2008 Marvel has been taking the world by storm, acting as a cultural colossus in the minds of millions. Ultimate Alliance 3 focuses more on the comic books, but pulls in references from all over: the plot of Infinity Stones falling to earth and bringing about a Thanos inspired punch-up fits with the recent movies, even if the execution is different. 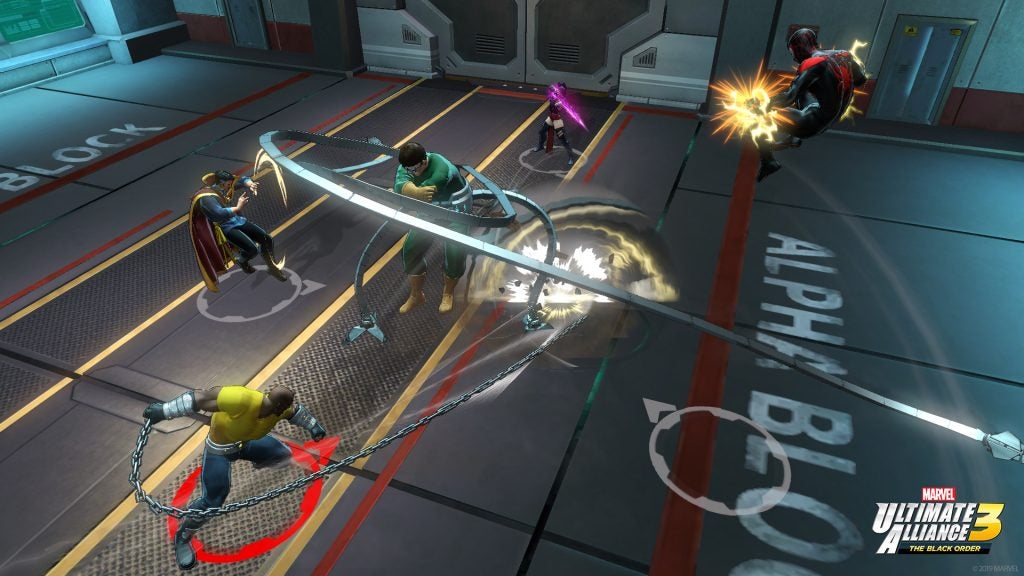 Elsewhere, while fighting a hallway full of ninjas, Daredevil admits that he does his best fighting in corridors (a clear reference to Netflix’s Daredevil TV show’s predisposition to have their blind superhero leathering folks in hallways.) Elsewhere, deep cuts such as Elsa Bloodstone and Crystal back up pretty much everyone you’ve seen in the Marvel Cinematic Universe so far.

Elsewhere, Yuri Lowenthal — the voice of Spidey from the PS4 exclusive Marvel’s Spider-Man — returns to quip as Spider-Man, and cements the role as his. He’s as much Spidey now as Mark Hamill is the Joker, and I’m hoping his tenure is just as long.

However, this service doesn’t seem to extend to the Fantastic Four. Clearly, they’re on holiday right now because they’re not mentioned at all in the game. The X-Men get a fairly raw deal too. Please forgive the spoilers, but in Alliance 3 you visit the Xavier institute and fight sentinels, but for some reason you don’t start the game with Cyclops, although he’s been added now through free DLC. Jean Grey, Iceman and several other classic mutants are curiously absent, and Beast shows up to drop a few voice lines and then tears off with little more than an “Oh my stars and garters.”

You can’t include everyone in a roster such as this, and it makes sense for Marvel to focus on the characters it’s actually using in the movies. Nevertheless, these are huge omissions. Skipping out on the entirety of the Fantastic Four makes me genuinely sad, especially since three of the four – sorry, Thing –have powers that would make for great characters in the game. It would offer some sorely needed gameplay diversity.

The hit rate for characters is decent in terms of characterisation, beyond the travesty of Marvel Ultimate Hawkeye – objectively the worst Hawkeye – with characters riffing on both live action appearances but also their rich comic history. Did I mention Nightcrawler was here yet? He is, he sword-fights with his tail, a comic-book reference I was really happy to see included. 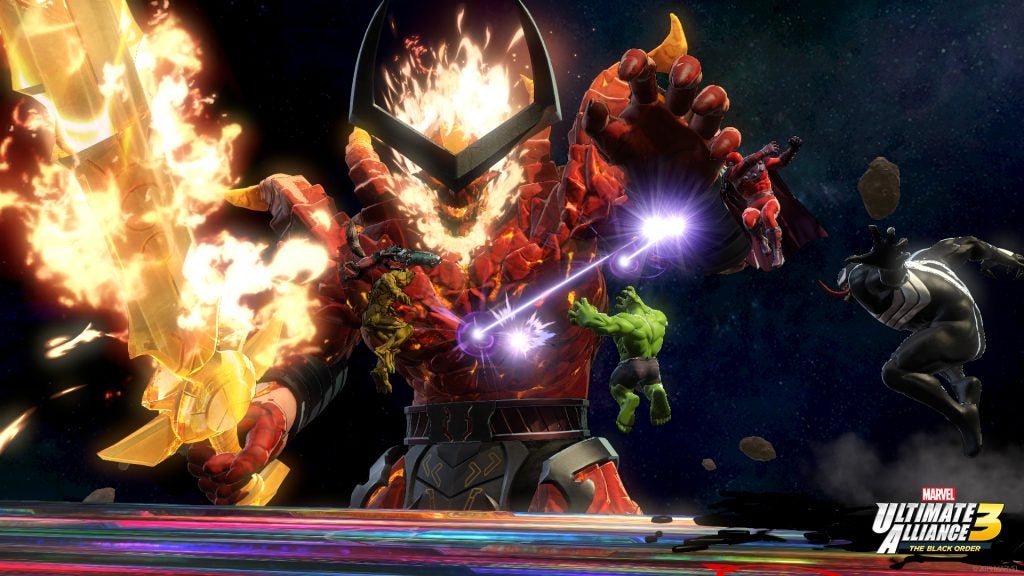 However, the game doesn’t really respect your choices when it comes to characters. Your heroes aren’t voiced when talking to other heroes – as they didn’t want to voice every member of the roster – and the cut-scenes don’t even show your team, just a random assortment of heroes. Worse still, there’s no specific voice-lines: talk to Elektra as Daredevil and there isn’t a hint of romance, while back on the Raft after teaming up with Venom, I was playing as Venom himself when every character kept asking me if it was okay to team up with a villain like him. It’s sloppy.

Unfortunately, the hit rate for characters when it comes to gameplay is much less successful. In the game, you’ll be stuck with just your light attack, heavy attack and one special ability until you get to level 5. Then you’ll be given another at level 10, 15 and 20. But that’s a few hours of playtime, and most characters have burnt through their welcome long before you start getting their most interesting moves.

Often, light attacks and heavy attacks feel the same, no matter who you’re playing as. Special moves are often “hit one person really hard”, “move a distance while hitting” and the old favourite “hitting repeatedly by mashing the button to keep punching.”

This isn’t the case for every character. Spider-Man, Captain America and Hawkeye are all characters I came back to again and again, because the combat actually feels like it works for them. However, for a lot of the heavy-hitter characters, it feels like you’re just swinging your fists and hoping for the best, with the occasional screen-clearing special attack coming from nowhere.

I tried to rotate my heroes with every mission, starting with a team made up of Spider-Men (Spider-Gwen, Miles Morales and Venom backed up Spidey) and moving into The Defenders (Daredevil, Iron Fist, Luke Cage and also Wolverine, because there’s only three of the four-person team here). You get bonuses for picking loosely affiliated teams, and while I originally aimed for this, I quickly found that the only real effect was a few small numbers going up somewhere. 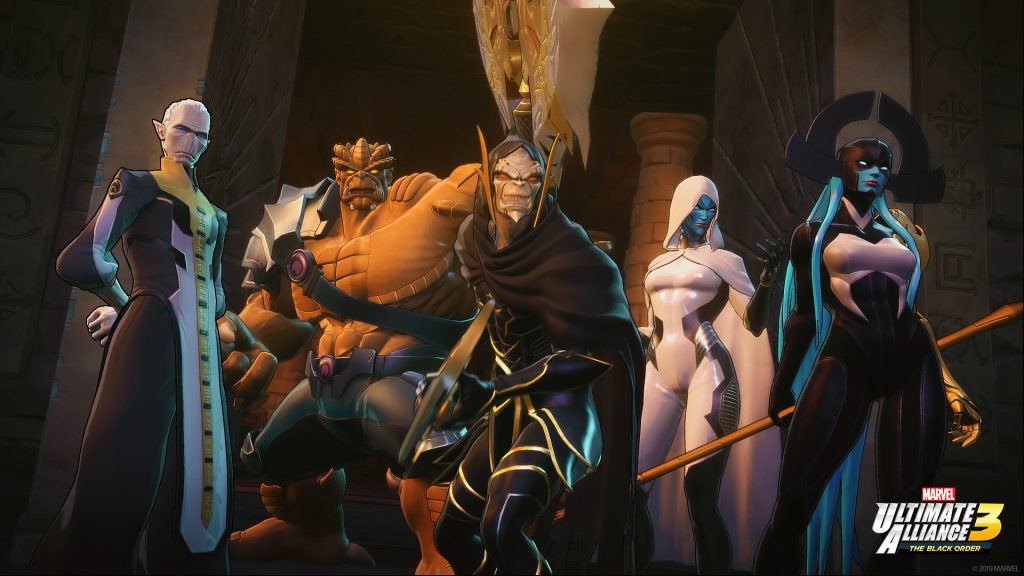 This is the lip service that Ultimate Alliance 3 plays to being a role-playing game. There are numbers hidden away everywhere, whether it’s on a grid or with the equippable ISO-8 crystals that boost some stats in a small way. There’s no real equipment system or even a way to level up your heroes individually. Instead, you just get a lot of vague and slightly stressful numbers, using in-game currency to make everyone in your team have more strength, or a little more mastery – whatever mastery actually is.

This would be fine if the game was anything more than competent as an action brawler, but that’s as far as it goes. It doesn’t have the mechanical complexity to stand on its own as a brawler, since every single non-boss encounter involves you wading in and throwing off special moves in tandem with your friends until the enemies are dead.

There are several cool moments during the boss fights: spaffing some sort of hardening solution onto Sandman so he can be recaptured; dodging the laser-beams of Ultron’s army of drones or even outrunning Juggernaut as he pinballs his way through the X-mansion. However, these don’t support the game alone, and if I weren’t reviewing the game then I don’t think I’d have stuck with it.

If it’s fan service you’re looking for, and only fan service, Marvel Ultimate Alliance 3 might be worth it. Providing you’re not too into the Fantastic Four. But this game feels like a budget RPG with its focus on arbitrary numbers, lacking anything particularly memorable.

The game is better with friends – but so is every game. Without friends, the sub-par AI means your buddies will blunder into every heavy damage attack, and at least you’ll have someone to talk to as you blunder your way through each fight. When the game is done, you can play through infinity rifts – special challenges that add tough new factors into fights from the game – whether it’s a boss rush or a horde mode fight. These reward you with items, XP and even special costumes. These are decent, but unlocked too slowly for someone wanting to play through the base game with a cool alternate costume.

Marvel Ultimate Alliance 3 is a budget reimagining of a fan-favourite series that fails to live up to the heights of that franchise. It plays and looks like a last-gen game, and it was a struggle to plow through the game, even for review purposes.

Frequently dropping frames in handheld mode, and unable to deal with the hordes of enemies it unleashes on you in the later levels even while docked, it’s nothing to write home about in terms of performance, either.

This is one for Marvel fans only. However, with the world-beating dominance the comic outfit has had recently, that could include just about everyone on the planet. For me, though, it just doesn’t sit alongside the series’ best.