What is the Marshall Stanmore II Bluetooth?

The Marshall Stanmore II is a Bluetooth speaker for people who have aspired to be in a rock band. For those who’d happily wear tour T-shirts but, perhaps, can’t quite pull off the look anymore.

And if you’re a famous rock guitarist currently lounging around in a band T-shirt, sat on a pile of tour cash, then you could have a Marshall Stanmore II too.

It’s a fairly large Bluetooth speaker that perfectly at home being cranked up loud. It has oodles of Marshall style and fairly good audio quality, too. However, since it doesn’t rely on Wi-Fi like its pricier sibling, the Stanmore II Voice, this version is just begging for an integrated battery like the Harman Kardon Go + Play 2. 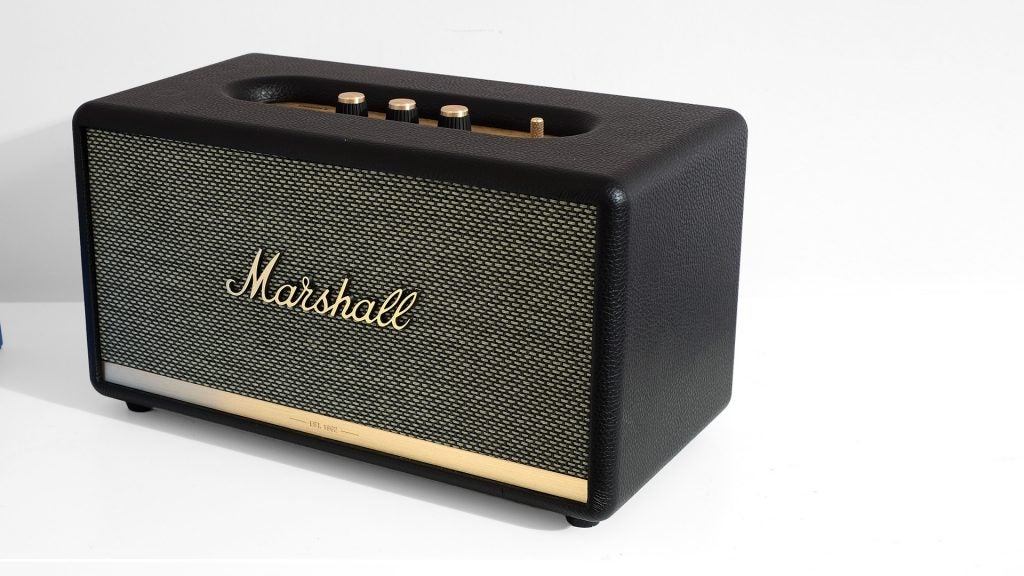 The Marshall Stanmore II has two jobs: it needs to sound decent, and to look like a direct descendant of a Marshall guitar amplifier.

Marshall is the most iconic name in guitar amplifiers – but if you’re reading this then you probably know this already. Famous names who have used Marshall kit over the years include Hendrix, Van Halen, Slayer and Spinal Tap.

Marshall has done a great job of making the Stanmore II resemble an amp, while at the same time adding a bit of glamour and softness for it to comfortably fit in a living room. The Stanmore II is a mid-size model in the Marshall lineup. It’s a similar size to a Sonos Play:5; big enough to be thought of as your main music source. 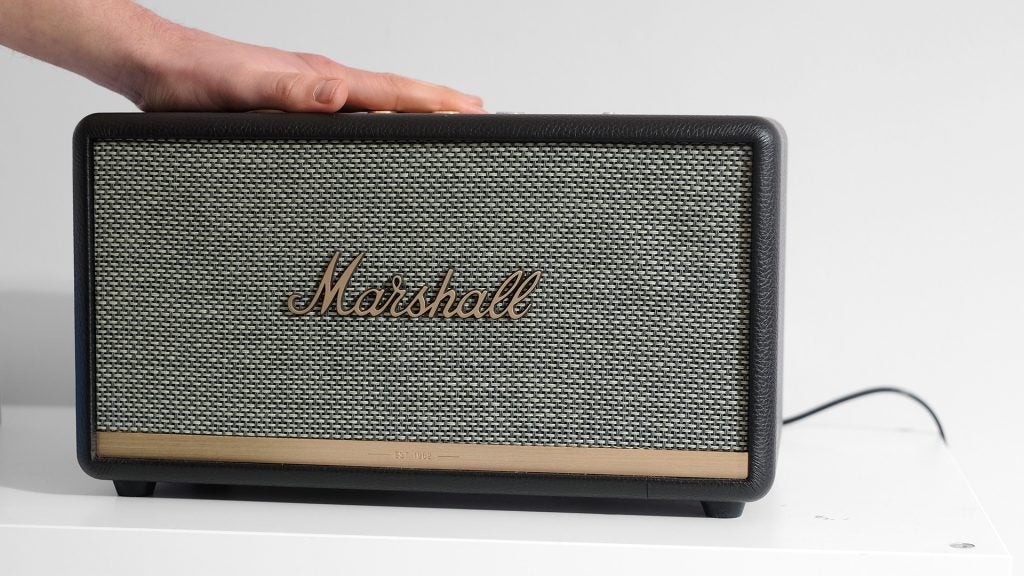 Synonymous with the classic Marshall branding, the central positioning of the brand logo, the brushed gold plate that holds the knobs, the chunky knobs themselves, and the leather effect vinyl that covers the Stanmore II’s entire outer feel familiar.

However, place the Stanmore II side-by-side with a classic Marshall head and you’ll notice that the finer points of their visual impact are completely different. In a good way. 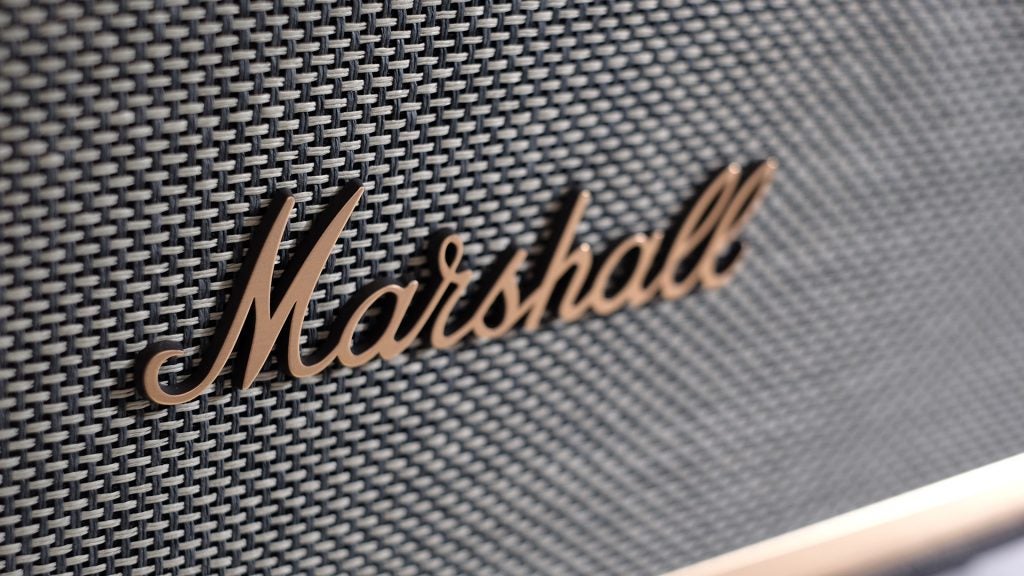 The soft gold of the Marshall logo atop a chunky grey grille has almost as much in common, style-wise, with a retro radio as well a Marshall amp. Check out the “est 1962” logo below the grille, too – it’s yet another nod to “heritage”.

None of this is criticism. However, a Marshall amp in a living room has a tendency to make a flat or house look “studenty”. A Marshall Stanmore II won’t. 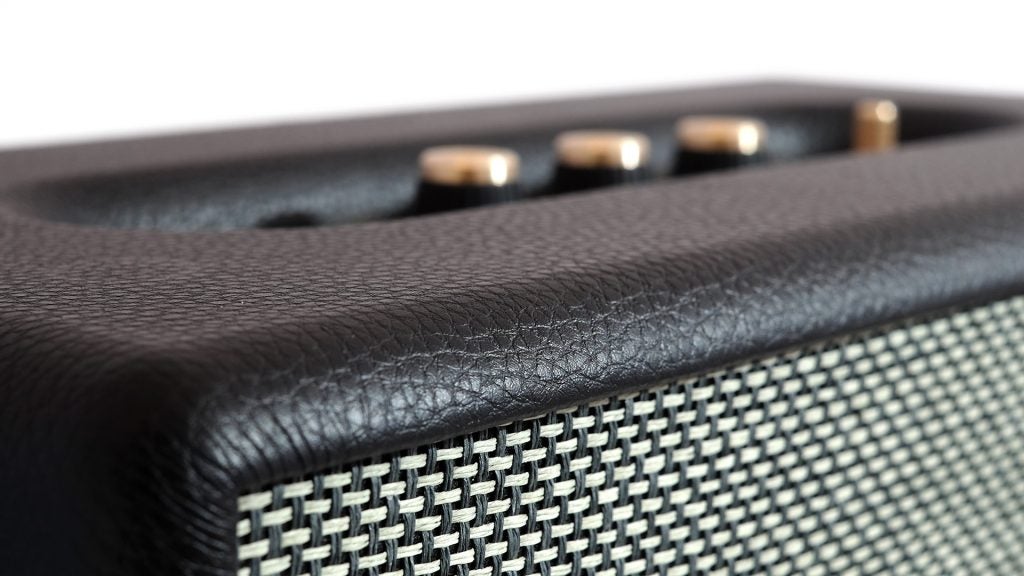 Also included on this unit is a handle, something that I wish was part of every speaker for the purposes of portability. Despite being a Bluetooth speaker, the Marshall Stanmore II actually needs to be plugged-in to function. To look at it you may think, “of course it needs mains power, look how big it is”. However, the Harman Kardon Go + Play 2 is a similar-ish size but can run for up to eight hours off a charge.

The Marshall Stanmore II is just like the Stanmore II Voice, without the Wi-Fi and smart-assistant features. To get a portable model you have to downgrade to the Marshall Kilburn II. It’s significantly smaller and has smaller-scale sound.

Marshall does give a nod to those with older tech that they may want to plug-in, including a 3.5mm aux input on the top, and a stereo RCA phono pair on its rear – handy for plugging in a record player.

You could even attach a guitar amp modeller pedal and use the Stanmore II as a low volume guitar practice amp. Wired connections in wireless speakers are, thankfully, fairly common – but here they’re unusually prominent. And the button that switches between them is right there up-top. 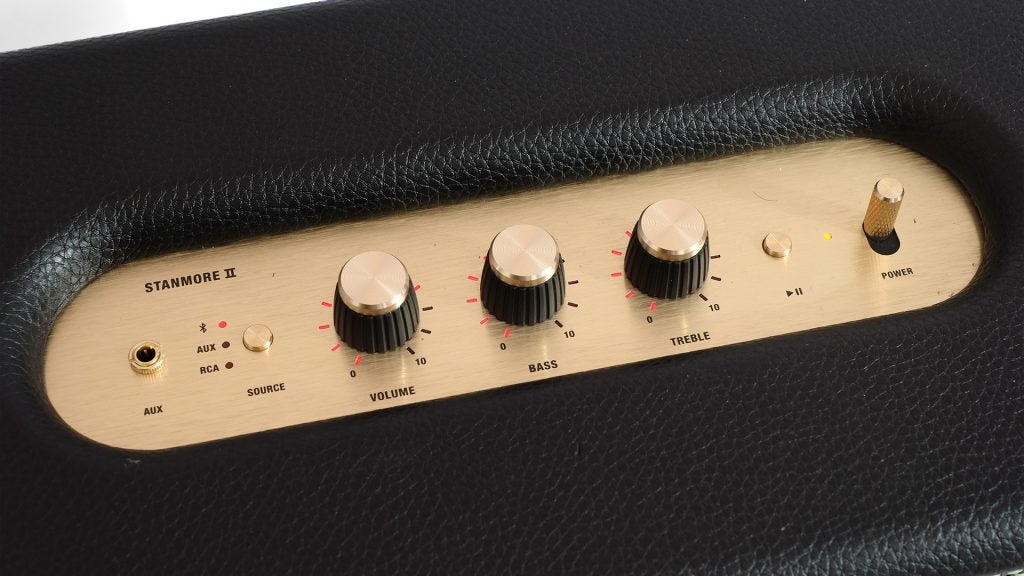 The Marshall’s large control knobs offer a satisfying feel, as does the power lever. However, as the volume and tone is controlled by your phone as well as these on-speaker controls, a series of LED light sits around each so you can determine the volume level and bass/treble settings.

You can also create a stereo pair of Stanmore IIs using the Marshall app.

The Marshall Stanmore II sound offers some important benefits, those that make this a solid buy at its current selling price of £199 – if not its original £299 cost. This speaker sounds super-comfortable at high volumes. It doesn’t reach its peak entertainment potential until you crank up the volume to at least 50%, which is actually pretty standard for a traditional speaker such as this.

That means speakers without passive radiators or ultra-long throw drivers that squeeze greater performance out of a small box. It has a bass port on the back, but similar to other Marshall speakers, the approach here is pretty old-school. You get two smaller drivers for the high frequencies, and one larger “subwoofer” in the centre. This sub, judging by the audio, also takes responsibility for a lot of the mid-range. 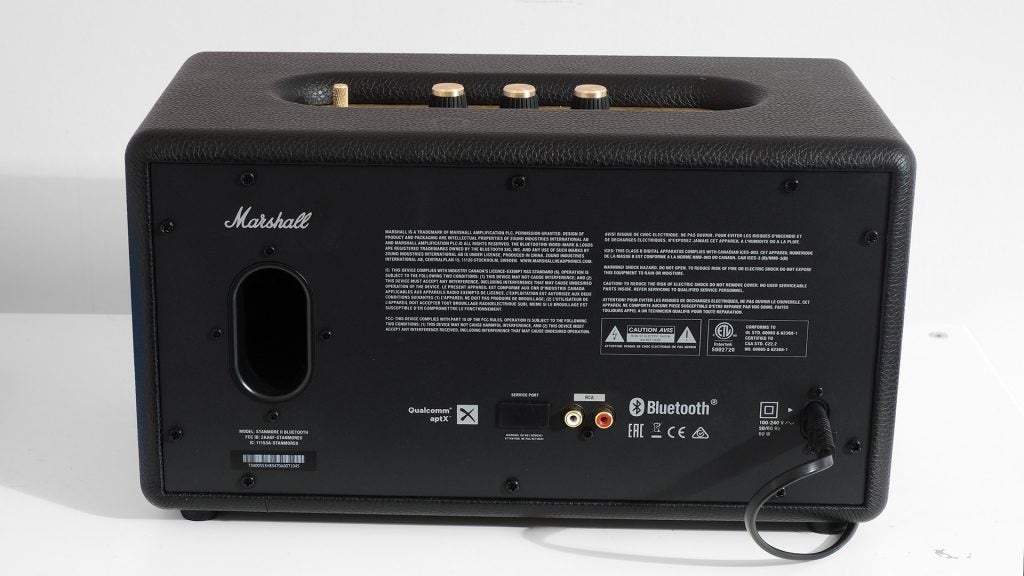 This is the reason it sounds so relaxed; it’s at ease at volumes that will make your neighbours feel anything but. The Stanmore II is a great party speaker.

Bass depth is good, too – at its price, if not necessarily the size. The Stanmore II can handle the kind of sub-bass frequencies that a lot of smaller wireless speakers – bar the Sonos One – bow out of entirely.

At first the upper-mids and treble can sound a little unrefined, but I found my ears grew accustomed to the tone within an hour or so. If yours don’t, you can just tame the treble a little with either the treble knob up-top, or through the app.

Marshall’s Bluetooth app lets you use parametric EQ presets with more bands that just the treble/bass of the top-plate controls, and create your own. For the most part I’ve used the default “flat” mode, though. 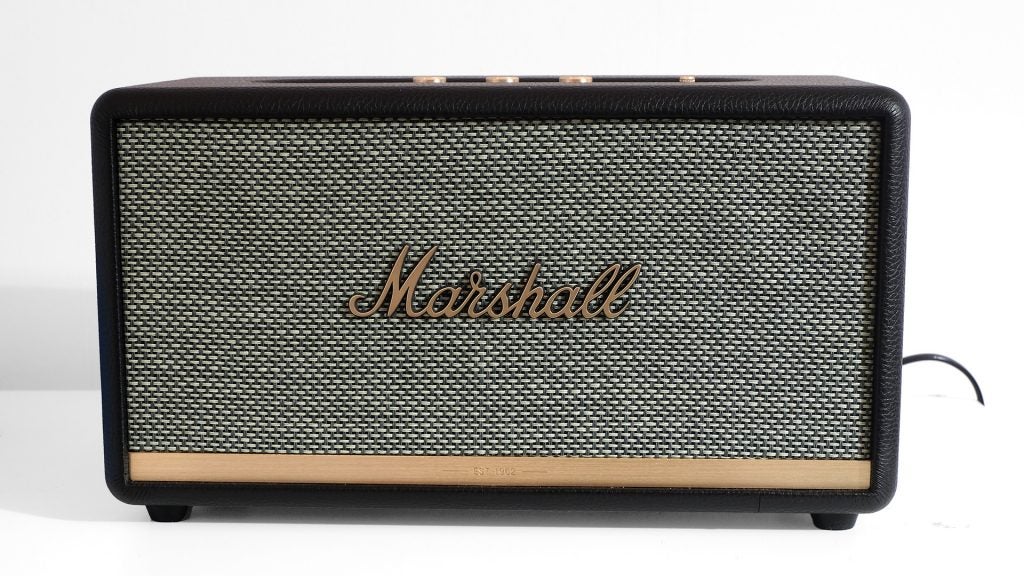 There’s no hiding that the Stanmore II falls behind top performers such as the Sonos One and Harman Kardon Go + Play in certain areas, though. Bass control, dynamics and separation are just okay.

The speaker can put out sound with decent scale and stature, but it can seem a little flat and two-dimensional compared with the best-in-class models. There’s some bass bleed, or at least less-than-ideal tonal control in the area where the bass meets the mids.

And while the Stanmore II’s bass floor is about as good as you’ll get for the price, in music where a bass bed sits distinct, far below the rest of the mix, the Harman Go + Play does a much better job of projecting and promoting these elements with distinct punch. This effect is much clearer with hip-hop and electronic music than rock.

Just as the Stanmore II doesn’t use any particularly interesting or advanced tech in its actual speaker drivers, the sound is an effective but somewhat blunt instrument.

Still, few £200 Bluetooth speakers can play as loud as the Stanmore II with almost zero audible sign of strain. If the aim was to make a speaker that can rock out, the Marshall Stanmore II is clearly a success. And, well, of course that was the aim. 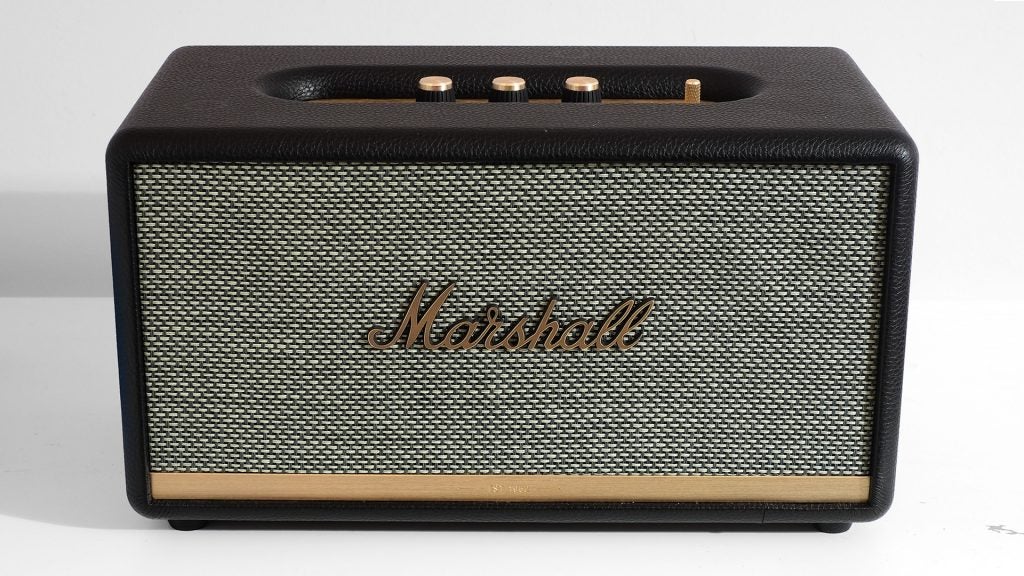 Why buy the Marshall Stanmore II?

The Marshall Stanmore II is a solid wireless speaker that, if you can find it at its £199 price at least, offers solid performance and a punchy visual presence that you’ll often have to pay more for.

It sounds its best when played fairly loud, but doesn’t quite have the separation and dynamics of the very top performers. The same criticism can be levelled at Marshall’s other speakers, too.

However, the one true omission is portability. The Marshall Stanmore II would be a great speaker for summer days – and if that appeals then you should consider the Harman Kardon Go + Play while it’s still available.

A rock icon in speaker form that doesn’t break a sweat at high volumes.