What is the Harman Kardon Go + Play 2?

The Harman Kardon Go + Play 2 is a speaker that takes us back to the golden age of the iPod dock. This isn’t some tiny Bluetooth speaker or a very expensive one like the Naim Mu-so.

It’s a big boombox of a thing, but still has a battery to let you use it away from home. With just Bluetooth to stream wirelessly, it’s not a hi-tech multiroom speaker, but it is priced right at £249 and has rocking bass at a price most don’t get close to replicating. 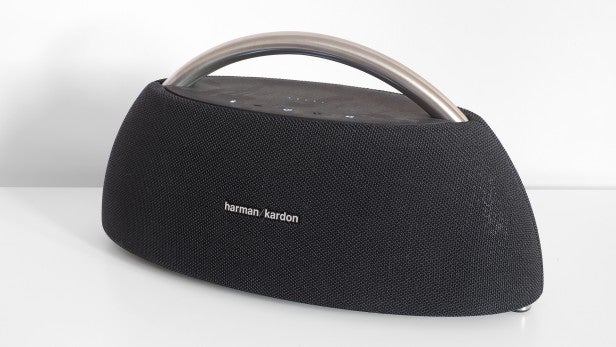 What’s going on here then? The Harman Kardon Go + Play 2 is much larger than the average £250 portable speaker, completely at odds with the size and designs used by most Bluetooth speakers over the past two or three years.

It’s more like a boombox for 2017, but with a look simple enough to avoid looking ridiculous in your lounge. The front and back are covered by a curved woven grille, all-black apart from the bright silver Harman Kardon logo dead centre on the front. 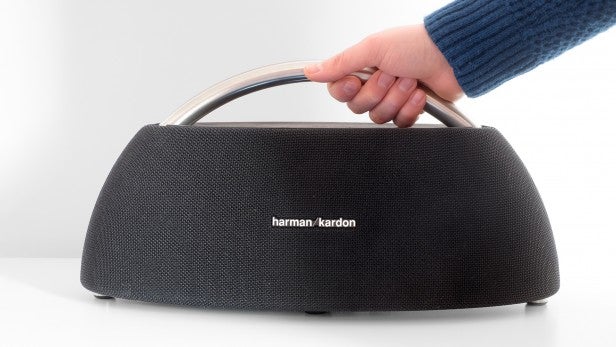 It’s probably too large to take out regularly unless you have a car or a large rucksack you can dedicate to the Harman Kardon Go + Play 2. But it does have a giant aluminium handle on the top, telling you it’s absolutely begging to be taken somewhere.

It’s built like a tank but is light enough to take around the house without it being a trial, and rubbery feet on the bottom stop you from having to worry about damaging the Harman Kardon Go + Play 2. They also stop too much vibration from being transmitted to the surface on which the speaker rests.

Sure, the Play 2 isn’t the prettiest or subtlest portable speaker around. But for what is essentially a wireless party speaker, it looks grown-up and has at least a hint of sophistication. It’s much better-looking than the original Go + Play. 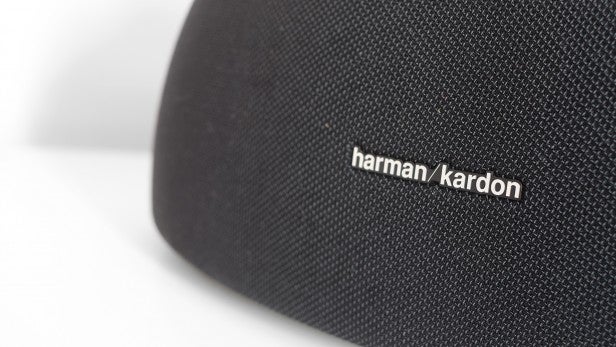 The Harman Kardon Go + Play 2 doesn’t have a lot of bonus features. Harman Kardon stuck to the bits that would be useful in a device like this. You can charge your phone using a USB port on the back, there’s a 3.5mm aux input plus the power socket live behind a rubbery flap on the rear. This isn’t a full-on water-resistant speaker, but this bit of rubber means you can put the Go + Play 2 on wet grass without worrying.

As it uses much more power than your average tiddly portable speaker, the Harman Kardon Go + Play 2 uses a relatively high voltage cylindrical power plug rather than one that lets you use your phone adapter to charge. But I’d much rather have that than wait six hours for the battery to recharge. As is, it takes a couple of hours, and will last for eight hours at moderate volume. 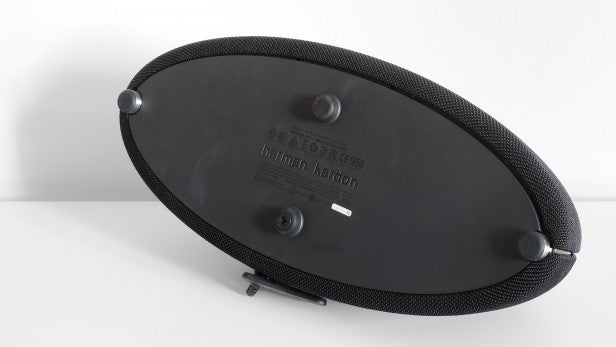 The one extra I didn’t notice to start with was a mic array that lets you treat the Harman Kardon Go + Play 2 like a speakerphone. I can’t imagine using a speaker this large as such, and will admit I switched over to using the phone pretty quickly after trying it out, but the feature is there if you want it.

Sound quality is the real key feature of the Harman Kardon Go + Play 2, and what better a focus is there for a speaker?

The main way the Harman Kardon flattens the similarly-priced competition is bass depth. Where most Bluetooth speakers just can’t deliver sub-bass frequencies, they are no problem for the Play 2.

You get solid, deep, party-ready bass whether you’re playing at max volume or the lower level I’ve been using to listen to some tracks while working. Harman Kardon says the frequency response starts at 50Hz, but the Go + Play 2 does actually make some noise in the 40-50Hz range too. Plenty of £200-odd wireless speakers are more or less silent below 60Hz. 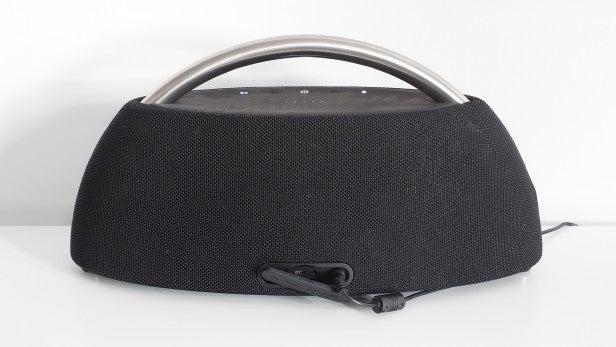 Turning down the audio geek dial a bit, this means the Harman Kardon Go + Play 2 can produce truly deep bass, the sort you can feel in your chest when a kick drum kits. Being used to reviewing small speakers or larger ones that are bassy but end up sounding muggy and muddled as a result, this is a refreshing change.

The bass is powerful but doesn’t ruin the sound. There is a definite low/sub-bass emphasis, though, which seems like Harman Kardon showing off what its engineers have managed to cram into a still fairly small shell. At times it made me worry about complaints from neighbours, and can be distracting with tracks that have a lot of ‘non-synthetic’ low bass.

Sad as it sounds, a few times I did wish there was an app that would let you make the bass less powerful, if only for the sake of my neighbours. Harman Kardon does offer an app for its wireless speakers, but it doesn’t feature EQ. 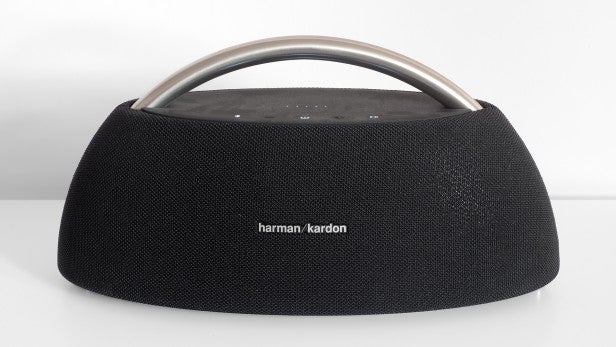 This is the only major issue you might want to consider: if you live in a shared house with poor sound isolation, your flatmates won’t thank you for buying a Harman Kardon Go + Play 2. Much as they’ll make you bring it into the lounge for house parties.

The rest of the sound is remarkably clear and tasteful given the low-bass clout. Listening to it next to my favourite small wireless speaker, the £200 Riva S, the Harman Kardon Go + Play 2 has cleaner, brighter treble and a much wider, larger soundstage.

Take off the front grille and you can see why the Go + Play 2 sounds good. There are two tweeters, two larger bass drivers and a pair of matched passive radiators. That’s the round thing you see in the centre, with another one on the back, to avoid distortion. 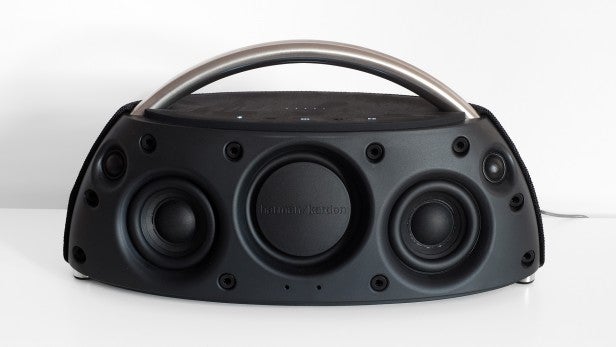 For a wireless speaker, separation is great and there’s a good amount of detail. This is the sort of speaker you might buy for barbecues and then end up using as your main hi-fi. It may be bigger than most wireless speakers of this price, but it sounds better than just about all of them, too.

There are a few ways it could improve, though. The upper-mids aren’t quite as rich as they could be, meaning that the detail in vocals is delivered in quite a matter-of-fact way, rather than the smoother presentation you might get from a pair of good bookshelf speakers. As mentioned before, the low-bass power can be distracting. Because the emphasis in the very low-frequency register, it doesn’t spoil the rhythm or drive of music, but a little more discipline and bass speed would make the Harman Kardon Go + Play 2 seem that bit more refined.

However, the main point to take away is that it’s bags of fun, and sounds good, too. 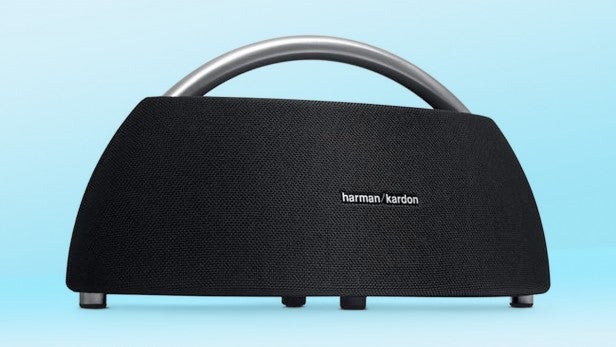 Should I buy the Harman Kardon Go + Play 2?

The Harman Kardon Go + Play 2 is a great wireless speaker – one that seems to come from another time. It was a time when there was a much greater difference between small and big portable speakers, and this is bigger, louder and more exciting than most rivals.

A lot of you may prefer the Sonos Play:1, a true non-portable multiroom home speaker that has a more easy-listening sound and smoother mids. However, the Harman Kardon Go + Play 2’s low-bass power is quite remarkable. It’s a real party in a box, but one that doesn’t trade away all fidelity.

Big, powerful sound makes this a great portable buy – if you don’t mind a bigger box.