A well-designed, well-made, well-balanced smart speaker that has the power to thrill with the volume turned up

Proof that smart speakers don’t have to blend into the background, Marshall’s £350 Stanmore II Voice is big, brash and bound to be noticed – especially when you crank up the volume dial. 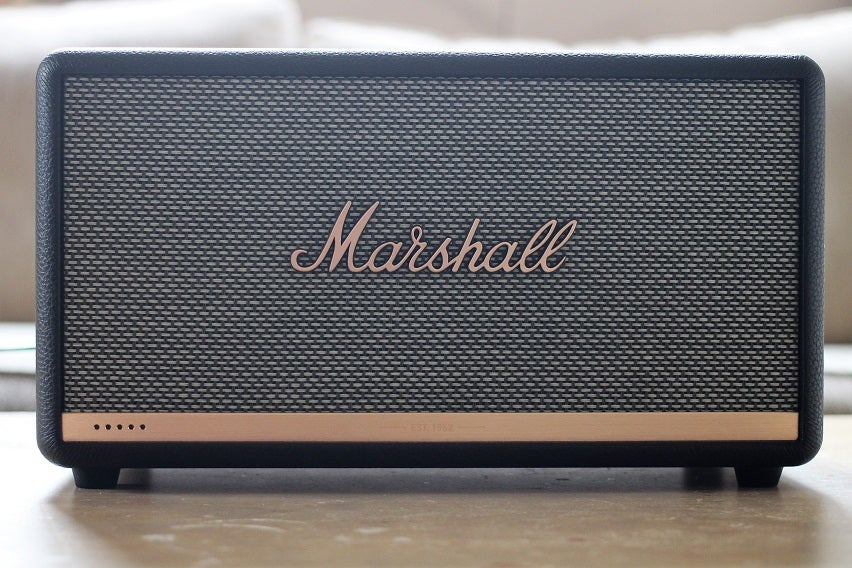 Its styling might be “old-skool”, but what’s inside is anything but. There’s Wi-Fi and Bluetooth onboard, plus Amazon’s Alexa voice assistant allows you to control everything from music playback to compatible smart home devices using nothing but your voice.

So is Alexa a secret guitar hero, or is this a musical collaboration that should be filed alongside that dreadful Lou Reed and Metallica album?

Designed to look like the cab of a Marshall amp, the Stanmore II Voice is a big lad – about the size of a bread bin or large toaster. You won’t squeeze this smart speaker onto a window sill or bookshelf like you would an Amazon Echo – you’ll need to clear a dedicated space for it to live in. 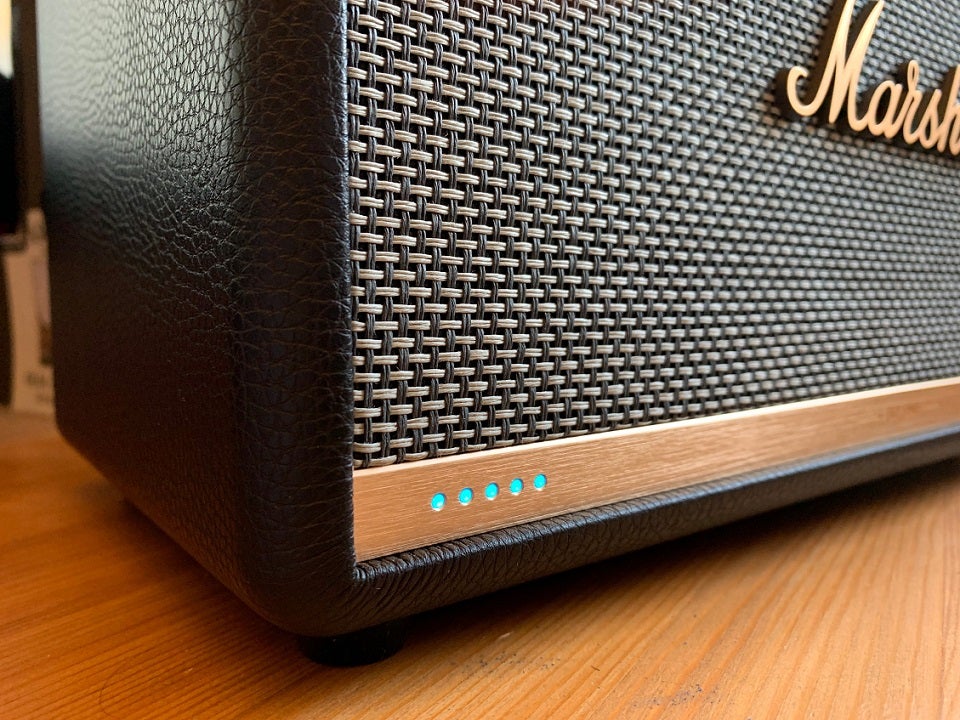 Setup is a breeze. Download the app, turn on the speaker, and an icon for it will pop up on the screen. Input your Wi-Fi password (no need to even select a network if your phone is already connected) and a few seconds later it will ask you to login to your Amazon account to wake up Alexa. A few taps later and you’ll be ready to go.

Despite the new-fashioned tech inside, the Stanmore II Voice certainly hasn’t forgotten its roots. Its sturdy wooden frame is wrapped in black vinyl, with the trademark weaved cloth covering the front and that iconic logo emblazoned across the middle. At 4.75kg, you could certainly do some damage if you chucked it out of a hotel room window.

Whether you like the styling or not will entirely be down to personal taste, but it’s probably fair to assume that anyone who has ever closed their eyes and played air guitar, or dreamed of growing their hair and wearing a Canadian tuxedo, will have a soft spot for the Stanmore II Voice’s rock ‘n’ roll aesthetic. And that’s pretty much everyone, right?

While the design of Marshall amps hasn’t changed much in the past 60 years, the Stanmore II has had a few tweaks that update it for day-to-day wireless listening. While the rotary dials on top will look familiar, they’re now surrounded by red LED indicators to show what position they’re set to, while five more on the front light up blue to indicate when Alexa is listening. 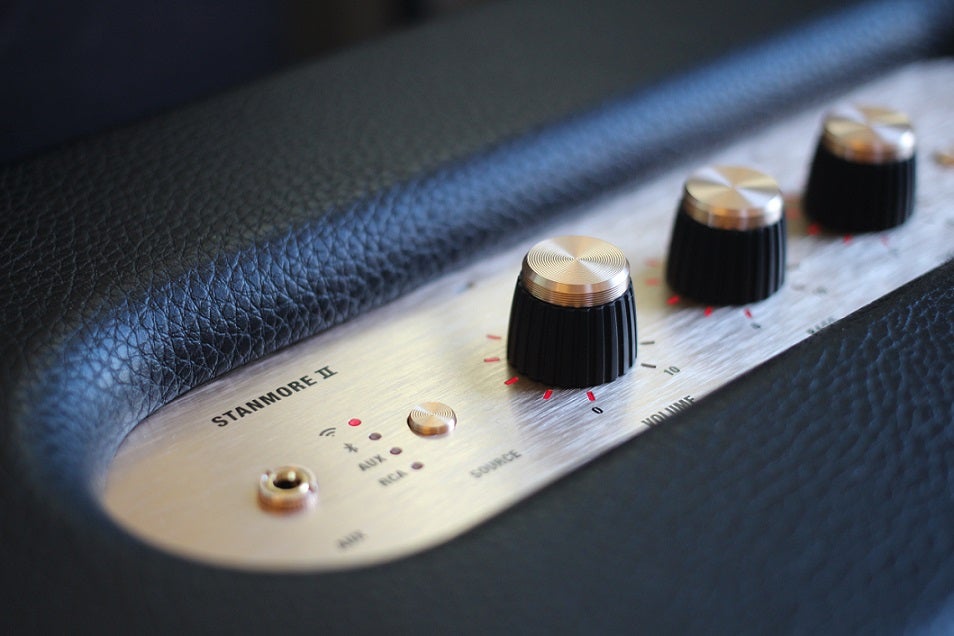 There are two far-field microphones onboard the Marshall, and even with music playing quite loudly it’s surprisingly responsive. Unlike a lot of smart speakers there’s no dedicated mute button to cover Alexa’s ears, but if you hold down her activation button for a couple of seconds, the lights on the front will glow red to indicate that she’s no longer listening.

There are also knobs for adjusting the bass and treble, plus small, round brass buttons to play and pause the music, and switch between the four sources: Wi-Fi (for Spotify Connect), Bluetooth, auxiliary and RCA.

Ironically, there’s a bit of a delay between pressing the pause button and the music actually stopping, but if you’re standing nearby and need to answer the phone, it’s much more convenient to have a button to reach over and press than asking Alexa to do it for you. It helps that the buttons are satisfying to click and feel well made, with a double-press also skipping forward a track and a triple-press going back. 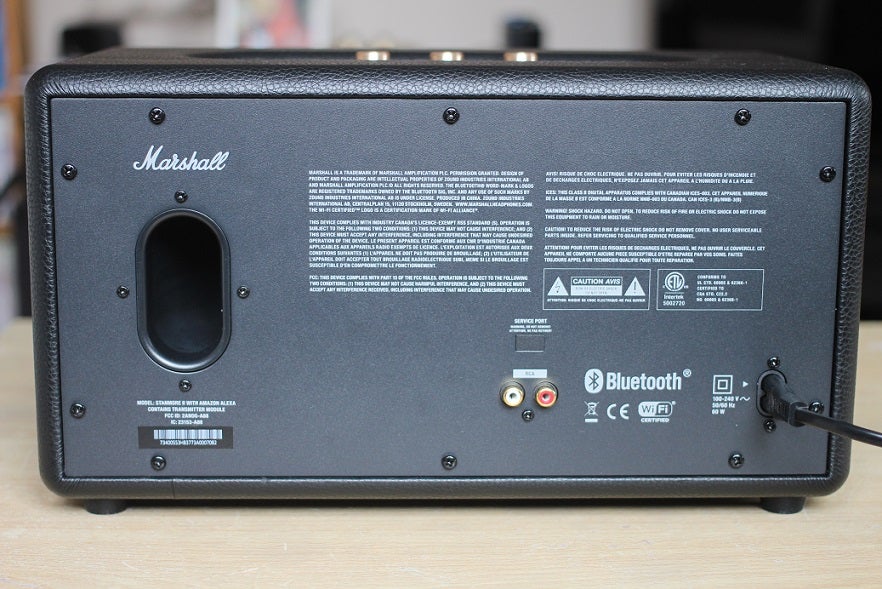 Aside from that, the app is pretty basic. You can control playback and volume of the currently selected song, switch between sources and adjust the brightness of the LEDs on the speaker itself – but it won’t let you browse Spotify’s catalogue or the songs stored locally on your phone, so you’ll probably find it gets less use than you might think.

If you want to use something other than Alexa to play music then you might need a little help, because the flimsy instruction pamphlet that comes with the Stanmore II Voice tells you nothing more than how to plug it in and download the app.

Fortunately, pairing a new Bluetooth device is very easy: you just select Bluetooth using the source button, hold it down to put the speaker in Discovery mode and choose the speaker from the menu on your phone. After that, you just need to say: “Alexa, connect my phone,” and as long as it’s in range it will reconnect without you having to press a button or open a menu. Seamless.

Based on its looks, you might expect the Stanmore II Voice to simply bludgeon your ears with volume. However, its raw power doesn’t tell the whole story.

Inside there are three class D amps: a 50-watt one to drive the subwoofer, plus a pair with 15 watts each to power the two tweeters. That’s a significant amount of oomph considering the Stanmore II Voice’s size, and even with the volume dial only turned up to seven, you could be at risk of a complaint from the neighbours. 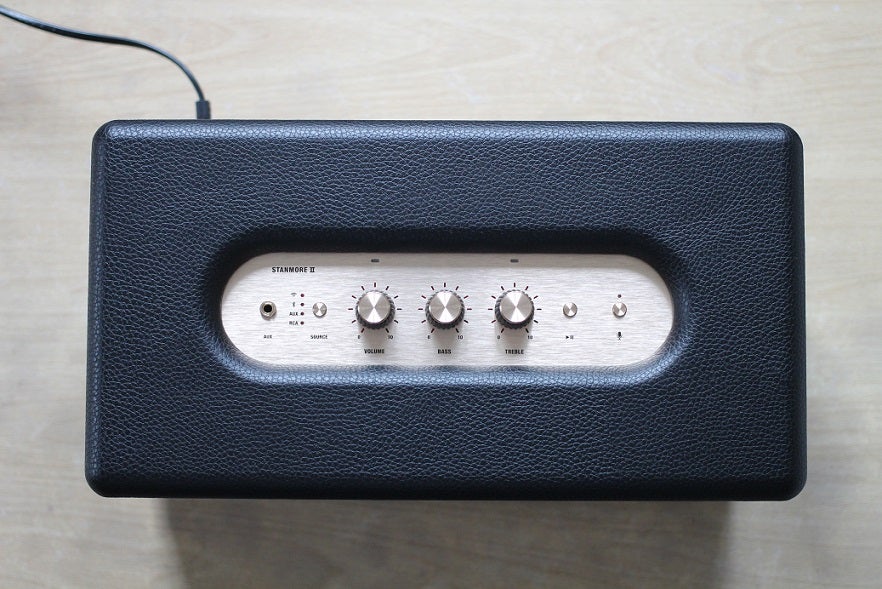 That means it’s great at filling rooms right into the corners, but there’s plenty of texture and detail in there, even with the EQ set to its default position. Play Rolling Blackouts Coastal Fever’s “Talking Straight” from Spotify and the Stanmore II Voice musters the same kind of drive and enthusiasm that makes the band such a thrilling proposition when they play live.

Not surprisingly, it’s particularly adept at reproducing guitar sounds, but just because it looks like it goes up to 11 doesn’t mean it only likes playing rock. Feed it something super-bassy, such as EPMD’s “The Joint” or The Bug’s “Poison Dart”, and that sub and 50-watt amp team up to produce a real rumble – but it’s musical, well controlled and doesn’t threaten to overwhelm the rest of the range.

Of course, you can fiddle with the levels to your liking – but unless you just position the sliders in the app completely at random, it seems almost impossible to make anything sound outright bad. 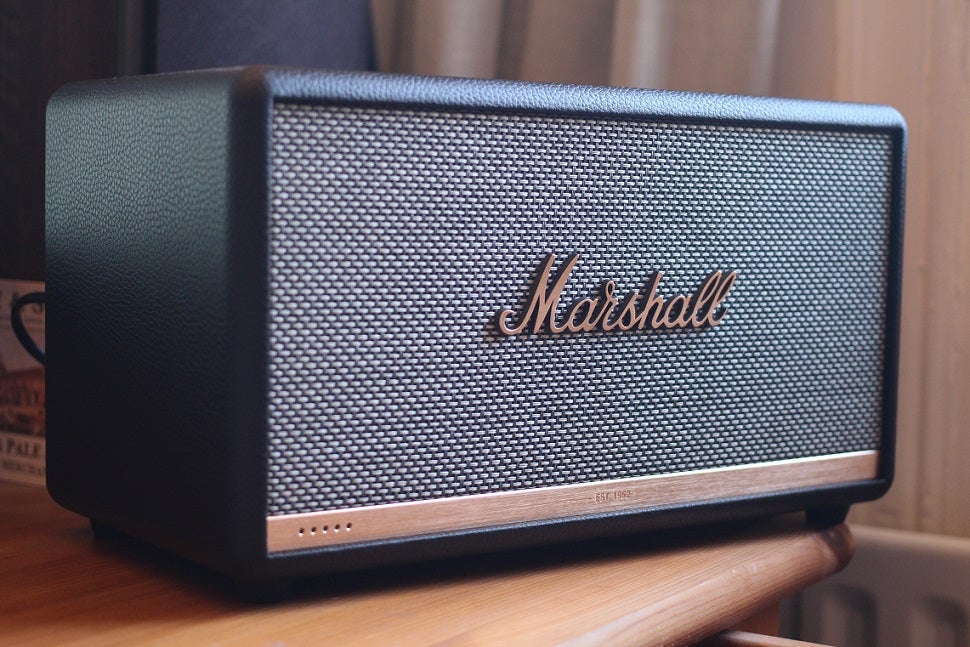 Given how good it sounds then you might be reluctant to interrupt the Stanmore II Voice, but if you really have to, Alexa’s hearing is generally impressive. Pump the volume over about seven and you’re probably better off pressing the button to activate Amazon’s assistant, but under normal listening conditions she’s impressively responsive.

With only two microphones compared to an Echo’s seven, you do need to speak a bit more deliberately when making commands if you want to ensure you’re understood first time. However, given its size, price and performance, this is clearly a speaker first and an assistant second.

A price of £350 for a smart speaker isn’t cheap, but the Marshall Stanmore II Voice is much more than just an Amazon Echo turned up to 11.

Sure, it isn’t quite as versatile as a Sonos – at the time of publishing the Marshall’s multiroom support is still listed as “coming soon” – but you can’t currently get the similarly sized Play:5 with Alexa onboard, plus the Stanmore II Voice is £150 cheaper.

If you want something that will really do your music justice, has enough song-pushing power to soundtrack a party, and your neighbours are understanding, look no further – the inclusion of Alexa is just an added bonus.

A well-designed, well-made, well-balanced smart speaker that has the power to really thrill with the volume turned up.