Available on Xbox One, PS4, PC
Who knew that there was common ground between Mad Max’s post-apocalyptic wastelands and the ravaged plains of Mordor? Well, Avalanche Studios – the makers of Just Cause – has found some. While it’s not hard to see traces of other games in this one’s DNA, most specifically from the Ubisoft school of open world action, Mad Max has something of the feel of last year’s surprise hit, Shadow of Mordor – not least because it might have been a surprise hit itself if not for timing.

Like Shadows it’s not a straight adaptation of its source material, or even a direct translation of a movie. Just as Shadows took inspiration from the visual style of Peter Jackson’s Middle Earth trilogies, so Mad Max grabs its look, its language and its dust and gasoline atmosphere from Mad Max: Fury Road, but not the stars nor the plot. The Max of the game may or not be the Max of the movie, just as the Max of the movie bears an ambiguous relationship with Mel Gibson’s Max of long ago. He’s a man haunted by demons, looking for peace in a world of lawlessness, thirst and casual violence. He drives, he searches and he fights. That’s enough. 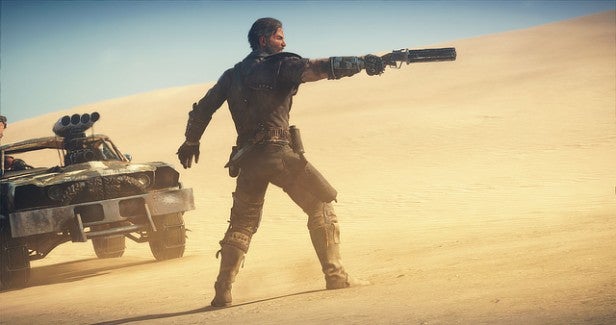 Here peace means some far off destination which you’ll only get to with the aid of the Magnum Opus, the vehicular work in progress of a quasi-religious, crazed mechanic by the name of Chumbucket. To get the Magnum Opus up and running you’ll have to deal with the rival gangs and wrest the territories of the wastelands out of the control of a warlord, Scabius Scrotus. It’s a terse and brutal premise for what turns out to be a terse and brutal game, where Scrotus’s scouts and scavengers have to be smacked down by the dozen, their vehicles wrecked and blasted, their grisly ‘scarecrow’ towers torn down. Mad Max is a game where regain health by chomping dogfood or ‘yuck’ chowing down on maggots scooped from a human corpse. It’s not what your mum would call nice.

Its central pillars are open-world exploration by car and combat, both in vehicle and on foot. With two Just Causes behind it, Avalanche has form in all these areas, yet it’s still surprising how well Mad Max carries them off. The buggies, cars and spike-enhanced trucks move fast and handle with a satisfying sense of weight and traction. Enemy vehicles work in packs, and need to be rammed, sideswiped or blasted off the road.

To help, Max can pull out his trusty shotgun – ideal for slow-mo shots at exposed petrol tanks – but also a harpoon, which can be used to tear bumpers, panels, doors and even drivers from enemy cars.

As in the movies, borders need to be repelled or thrown from the roof or bonnet, while fire and fuel erupts in spectacular explosions all around. This is vehicle to vehicle combat as it should be done. 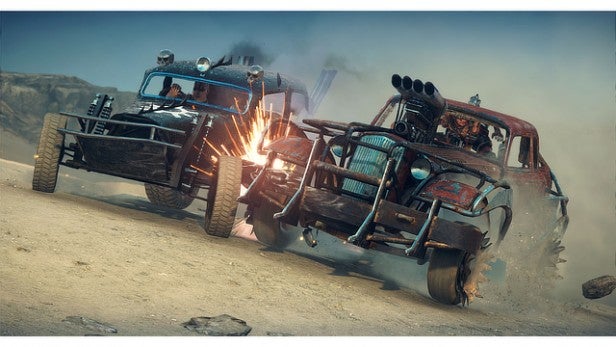 The action’s just as good on foot. With only one ranged weapon and very limited amounts of ammo, the focus is very much on hand-to-hand and melee combat. A shotgun blast or a thrown petrol can is handy for whittling the numbers down, but in the end you’ll have to get up close and personal. Here, Mad Max goes for a brutal, scrappy take on fisticuffs based on fast attacks, blocks and counters, where success relies on watching for the incoming attack markers and countering just in time before dishing out a beating. Get a chain of attacks going and duck incoming blows, and Max goes into ‘fury mode’, moving faster and doing extra damage. This is not a clean or sophisticated brawler, but it is a satisfying one, relying more on new enemy types, combinations and settings rather than just increasing numbers to keep things interesting. There’s tension and release in every fight.

Beyond this, you’ll spend a lot of time scavenging and looting, collecting scrap that can be used to upgrade Max’s gear or the Magnum Opus, plus parts that can be taken to a range of allied strongholds to give you supplies of fuel, water, food or ammunition. The wastelands are littered with enemy camps, rusting hulks and abandoned buildings, all of which can be rifled through for useful stuff once any guardians are disposed of. The game lets you tackle these your way, using a sniper rifle from the back of the car to take out sentries, or using the harpoon to drag guard towers down. Bar a few odd and artificial restrictions, gates can be rammed, blown up or pulled down. 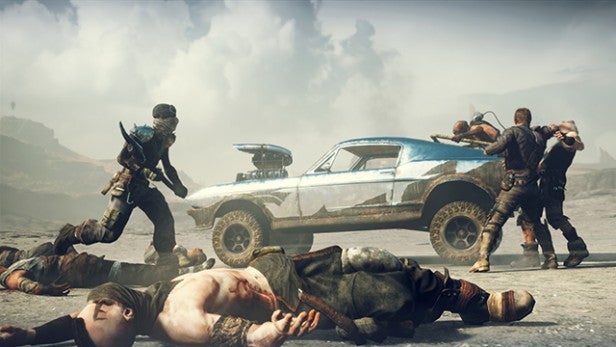 All this action is tied together by a string of story missions and a wider selection of side-missions, covering everything from using air balloons as vantage points (in Assassin’s Creed style) to races, convoy chases, takeover attempts on enemy camps, refinery demolitions and sniper clearouts. There are also wanderers you can help in exchange for information, plus a travelling mystic who can upgrade Max’s stats in exchange for special tokens.

In short, there’s always a lot to do at any time, with a daunting map full of icons and objectives to consider, and three good reasons to get on with it. Firstly, you’ll need to keep upgrading both Max and the Magnum Opus if you want to get through the later missions. Secondly, you need to keep boosting Max’s reputation – or Legend – in order to unlock those upgrades. Thirdly, the game has a sneaky habit of locking the next set of story missions until you’ve met certain requirements or purchased certain upgrades, effectively forcing you to tackle the busywork, whether you like it or not. 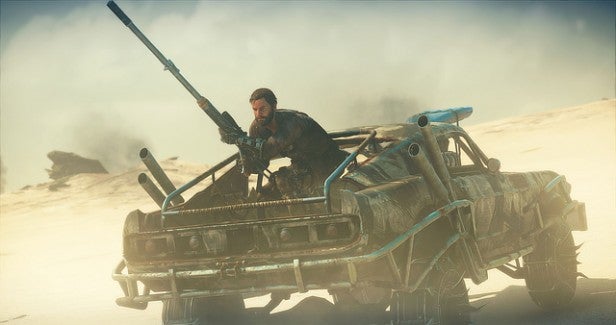 This turns out to be the game’s biggest weakness. Like Shadows of Mordor, Mad Max can be absorbing and hugely entertaining when you’re stuck into the story missions, but a little dull and repetitive when you’re simply working through activities and side-quests.  Shadows of Mordor compounded the problem through its endless grey, rocky landscapes – a situation Mad Max avoids by squeezing a surprising beauty and variety out of its cliffs, dried-up riverbeds and deserts, its bleached-out sunlight and fierce electrical storms. However, where Shadows of Mordor had its Nemesis system, building relationships between the player and an ever-changing cast of villains, Mad Max has only its story, its gameplay and its atmosphere to fall back on. It’s not exactly the most unpredictable of games.

Personally, I don’t find this a disaster; there’s more than enough action and excitement to carry you through. Car upgrades and Max upgrades make effective hooks, and the game has a nice way of escalating the challenge and creating situations where you can add the spectacle. The soundtrack is great and the voicework solid, while the graphics have a visceral, cinematic style. Sure, frame rates drop hideously in a few busy areas, but that’s by far the exception, not the rule. 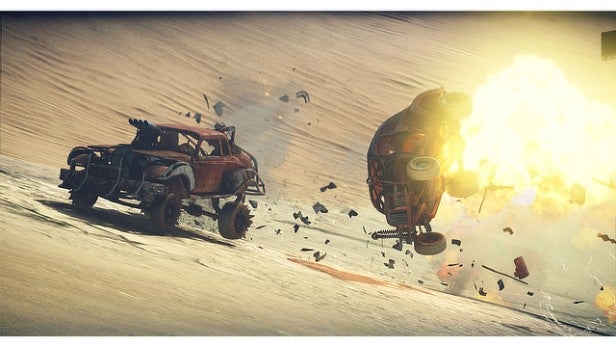 All the same, Mad Max can feel a little over-padded, and it’s slightly disappointing that the story gets off to a good start then simply disappears for lengthy stretches. Ditto for a failure to develop secondary characters beyond clichéd roles; a criticism you couldn’t level at the otherwise stripped-back Fury Road. Most seriously, Max’s timing could be better. Launching at the same time as Metal Gear Solid V: The Phantom Pain, it’s a much less sophisticated and more conservative open world action game, based on systems and a structure that were already getting dated several years ago.

Yet that’s a temporary issue. There’s something fast, furious and brutally compelling about this adventure, which captures the spirit of the movies even if it can’t match their drama. You’d have to be crazy to pick Mad Max over Metal Gear, but I wouldn’t be surprised if more than a few gamers pick up on it later, then hail it as the year’s great underappreciated gem.

Verdict
Mad Max has its ragged edges, relying too much on not-so-optional side activities, but it’s a fast, thrilling open-world action game that captures the spirit of the George Miller films. Bad timing makes it unlikely that it will be this year’s Shadows of Mordor, but if so it won’t be for a lack of effort, quality or style.