Available on Xbox One (reviewed), PS4, PC. Also coming soon on PS3 and Xbox 360.
Shadow of Mordor is the best Lord of the Rings game for nearly a decade, though considering the competition, that isn’t really saying much. More importantly, it’s a whole lot better than you might expect. It’s hardly the world’s most original game, but that doesn’t mean its short on thrills, drama or innovation. While descriptions of the game as Assassin’s Creed goes to Middle Earth aren’t entirely wide of the mark, they also don’t do the game justice.

In fact, it has as much in common with another Warner Bros. property: the Batman: Akham Asylum/City/Origins series. It’s another free-roaming, open-world adventure with the focus on combat and stealth, and while there are elements of Assassin’s Creed in its stealth kills and free-running acrobatics, it’s much less focused on urban spaces or vertical exploration. Meanwhile the hard-hitting, counter-heavy melee combat is closer to the Batman style, down to the slow-mo finishers when you put down the last enemy in a gang. And Shadow of Mordor does bring something new to the party, and while this feature sounds like a gimmick, it turns out to be surprisingly profound. 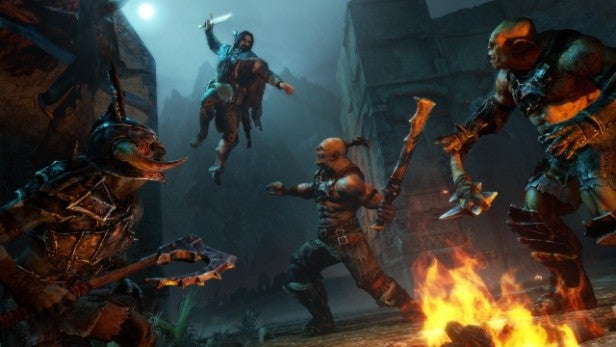 Nor, to its credit, does it wear its license lightly. The design of scenery and characters is 99% WETA and Peter Jackson, but the plot stretches deep into Tolkien’s backstory, so that the tale of a ranger of Gondor, bought back from death to avenge his murdered family, has richer implications than you first expect. Key characters from the lore are bought into play and not used cheaply, and while those who’ve studied the Simarillion will doubtless have a dozen or more complaints, those who love The Lord of The Rings and The Hobbit and the movie adaptations will find that Shadow of Mordor feels like a natural extension.

Here your protagonist is Talion, a ranger charged with defending the walls surrounding Mordor just as Sauron returns to the scene. Bad timing. His fort over-run by orcs and his wife and son slain by a mysterious figure known only as the Black Hand of Sauron, Talion himself is slaughtered. However, death turns out not to be the end. Instead, he finds himself trapped in a kind of limbo, alive but bound to the wraith of a long dead elf-lord, and doomed to keep coming back to life until he can avenge his kin; a bit like the fantasy equivalent of Bill Murray in Groundhog Day. Sadly, Talion doesn’t get to relive the same day in smalltown USA; he gets to wander around Mordor slaying orcs.

Our hero’s only hope of finding peace is to kill the Black Hand, but how does he get to this fiendish sorcerer? The answer turns out to be murdering his way up the ranks of Uruk-Hai, slaughtering the captains, their commanders and the warchiefs at the top. To do this he needs to identify his targets, and there are only ways to do it. One is to interrogate those directly below, taking him up the chain of command, while the other is to use the services of a delightfully Machiavellian, albeit hapless warchief wannabe; the almost lovable Ratbag the Coward. 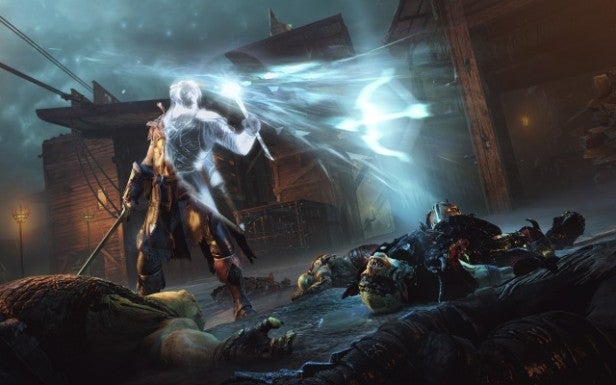 Cue multiple assassinations, infiltrations, straight up fights and the occasional boss battle, all of which test Talion’s interesting and varied skillset. Like the stars of Assassin’s Creed he can sneak behind orcs and stab them from behind, or climb to a vantage point and jump them from above. He can also dangle from a ledge and stab them from below, or use the wraith’s unearthly bow to slay them from a distance. This is where the game is at its most Creed-esque, to the extent that it does the same automatic parkour tricks when you hold a button.

When all else fails, he can take the orcs on face to face. Unfortunately for him, the odds aren’t exactly piled in his favour. As in the Batman games, you’ll often find yourself surrounded by multiple enemies, using quick, well-timed counters to ward off incoming blows, then fighting back with quick slashes and – if you can down your foes – a finishing move.

At first the combat is a struggle. You’ll find yourself under attack from too many orcs and spending too much time countering to land a decent blow. What’s more, the finishing moves seem to take ages, leaving you vulnerable to an incoming attack unless you break to counter, at which point your would-be victim jumps up for another go. In Middle Earth, it seems, just the one stab to the throat is no discouragement. Throw in some awful camera angles and the fighting can be infuriating. 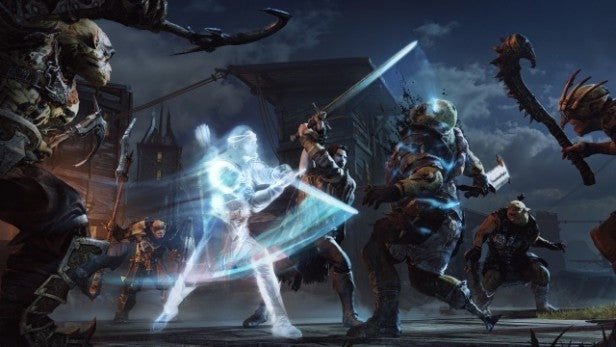 Persevere, however, and things slot into place. You get smart, learning to isolate targets or cut down the numbers with stealth or bow attacks. You also grow more powerful, using XP and the local currency to buy additional skills, which allow you to dish out critical hits, follow a magic stun attack with a flurry of blows or scatter enemies with a circular blast. Add in environmental options, like insect hives that confuse orcs or exploding barrels to thin down the numbers, and the action eventually gets a whole lot easier.

Meanwhile, each death actually plays its own part in the gameplay. Shadow of Mordor uses a thing called the ‘nemesis system’, where the ranks of orcs you’re slaughtering aren’t static, but change as specific orc captains grow more or less powerful, or die at your hands or at the hands of rivals. Defeat an orc captain and he might come back from the brink of death with vengeance on his mind. Be defeated, and that captain might rise in rank, and even ordinary orcs can be promoted if they happen to take you out. As the orcs move up the ladder they grow more powerful and, unfortunately, more difficult to kill. On the plus side, a dead captain will often drop a rune, which you can add to your sword or dagger. The more powerful the captain, the more powerful this rune will be, making it advantageous to take out the senior orcs.

Any orcs who have encountered you before remember you, and this and their distinctive – if vile personalities – make for a game that feels weirdly alive. Nothing makes you want to slay an orc more than a sneering comment once they’ve dealt you a fatal blow. You’re not just fighting another faceless bunch of thugs, but trying to take out the bastard orc that killed you last time, or the one that you know is after your head. More than a gimmick, the nemesis system turns out to be a great idea. Be sure that other games will pinch it. 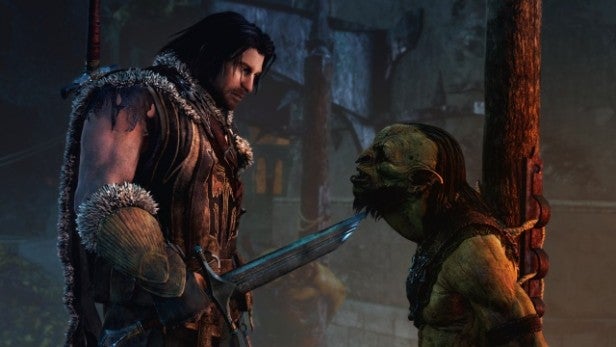 The system also feeds into the wider action. Each orc captain has his own strengths and weaknesses, and you can discover these by interrogating any officers who report to them. Some, you’ll find, might be invulnerable to stealth or ranged attacks, while others become weaker if you can attack them when mounted on a savage, snarling Caragor (the closest thing you get to a faithful steed in Mordor).

Beyond slaying, you can get your teeth into other activities. Finding, climbing and ‘reforging’ ghostly wraith towers will give you more respawn/fast-travel points and open up new missions in the area. Completing combat challenges will earn you cash you can use to buy new skills or weapon ugrade slots. Herbs and artefacts can be discovered, the former healing, the latter unlocking background lore. Meanwhile, two completely different strings of story missions see you tracking a familiar face to discover the identity and history of your new wraith ally, or working with a gang of escaped human slaves and outcasts to fight a guerrilla war against the orcs.

Many of the few faults there are will be familiar to fans of open world games. Like the Assassin’s Creed games, Shadow of Mordor can feel too heavily driven by its systems; there’s always a lot to do, but some of it grows repetitive with time. Getting swamped by seemingly endless waves of orcs can grow tiresome when you’re just trying to kill one captain, and the onus is on you to make sure that you don’t get into situations you can’t handle. Riding Caragor should be one of the highpoints of the game, but your snarling, orc-chomping mounts are hard to handle. Meanwhile, Mordor – as you might expect – isn’t exactly the most scenic spot to explore. 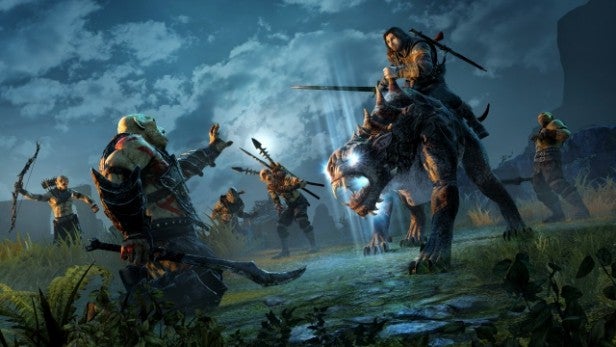 Luckily if the landscape isn’t so vibrant, then your orc foes make up for it. Their language is certainly colourful at times, and they’ve got a nice line in vulgar songs, mean-spirited rhymes and whining. It almost – almost – seems a shame to kill them. With enemies like this, who needs a view?

Verdict
It sounds like an unholy Middle Earth mash-up of Arkham City and Assassin’s Creed, but the Nemesis system helps turn Shadow of Mordor into something far more entertaining. With good, demanding combat, excellent stealth and enemies worth slaying it’s more compulsive than you might expect, and it treats the license with some respect as well. This year’s surprise sleeper hit? Don’t bet against it.