The MacBook Air 2020 is a great laptop. If you’re a student or just someone who want a thin and light Mac that can be had for under a grand, then I don’t think you’ll be disappointed in the slightest.

That puts it in a bit of an odd position. While this is a great machine, is this the best time to be buying an Intel Mac?

Whatever your view on that, this remains an excellent pick. The butterfly keyboard has gone and the classic design with the strong display remains.

The big upgrade here over the previous MacBook Air is the new, far improved keyboard. Like the iPad Pro and 16-inch MacBook Pro before it, the 2020 MacBook Air ditches the controversial butterfly keyboard for a far more traditional scissor-switch affair. Apple has dubbed this a Magic Keyboard, and it certainly lives up that rather lofty billing.

A lot of my praise likely comes from the fact I have a 2016 MacBook Pro, which has suffered many butterfly keyboard issues. The experience here is just so much better. The Magic Keyboard has roughly 1mm travel so you can actually feel those keys depress and it offers a really satisfying typing experience. The arrow keys have been redesigned too and there’s a Touch ID sensor in the top corner.

It feels like this keyboard takes the generally very good idea of those butterfly switches, but improves the experience. Having that extra bit of travel helps accuracy no end and it doesn’t take any time to get used to. Don’t come here expecting bouncy keys that clack as you type though, and the keyboard can still feel slightly cramped if you’re used to bigger machines. If you’re coming from an older MacBook Air, then the change will be instantly noticeable and definitely for the better.

The Touch ID sensor is very welcome and, as there is still no form of facial unlocking on Macs, it’ll likely be how you log in to the computer each time. It’s fast, barely ever refuses to recognise my finger, and can be used for other stuff like authorising Apple Pay payments.

Below the new Magic Keyboard, you’ve got the typically large Force Touch trackpad. Apple’s trackpads remain the best around and this one is no different. Instead of actually clicking, the trackpad simulates that feeling through haptic vibrations. It still fools me every time and it means you get the same response wherever you press. 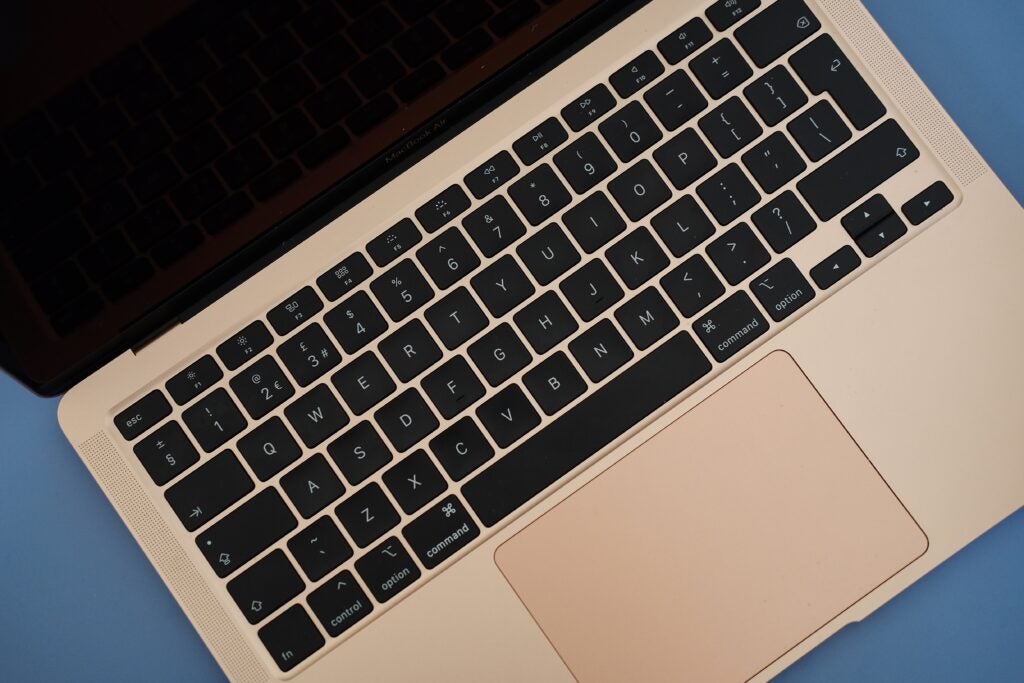 Keyboard aside, the rest of the MacBook Air 2020 is the same as the previous generation and you’re best off waiting for the inevitable Apple Silicon version for a true redesign. Still, this is a very good looking laptop. It’s thin and light, though it can be even smaller if some more of that screen bezel was reduced – just look at the Dell XPS 13.

The MacBook Air 2020 comes in three colours: a subtle gold, darker Space Grey and a more traditional silver. While I preferred the more overtly pinky Rose Gold from a few years ago, the gold hue still stands out the most.

There are just three ports here, with two of them being Thunderbolt 3 in the form of USB-C and the other being for your 3.5mm headphones. While it’s limited on the surface, Thunderbolt 3 is supremely fast and capable for everything from powering displays to external GPUs and more. You can use either of these USB-C ports for charging too, which is handy.

I do wish Apple had put each of these two USB-C ports on separate sides, as having them next to each other can be a pain when you have multiple things plugged in. I’d have also liked another port, but for that you need to jump to the MacBook Pro. You’ll probably want to invest in a good dongle if you go for this laptop, so you get a couple of USB-A ports, along with an SD card reader and HDMI output.

A big disappointment that extends to other MacBooks (and laptops in general) is the terrible webcam. This front-facing camera is supposedly 720p, but I always came across very grainy in video calls. This feels far more of an issue now than it would have been a year ago and I expect Apple to improve the quality next time around.

Screen – Bright and colourful, but not the very best

The 13.3-inch LED display here is the same as on the previous version, and it remains very good. While there’s no touch support, no 4K option and no OLED it’s still one of the most reliable panels on any laptop I’ve used.

It packs a 2560 x 1600 resolution for pin-sharp visuals and it is fairly accurate when reproducing colours. Though, importantly, it’s not as colourful or as bright as the MacBook Pro panel and that’s the version to go for if full DCI-P3 colour reproduction is vital. This is a far more mid-range option and for the desired market the display is great.

One of my favourite screen features Apple has made commonplace across its range is True Tone. This dynamically shifts the colour temperature of the screen to match the environment, giving whites a more orangey look and just making everything a little easier on the eyes.

It can often be hard to see when True Tone is on as your eyes adjust. Turn it off though, and you’ll be shocked at just how bright and white everything seems. Just remember to switch it off if you’re looking at photos, or you might end up with slightly wonky colours when you’re editing. 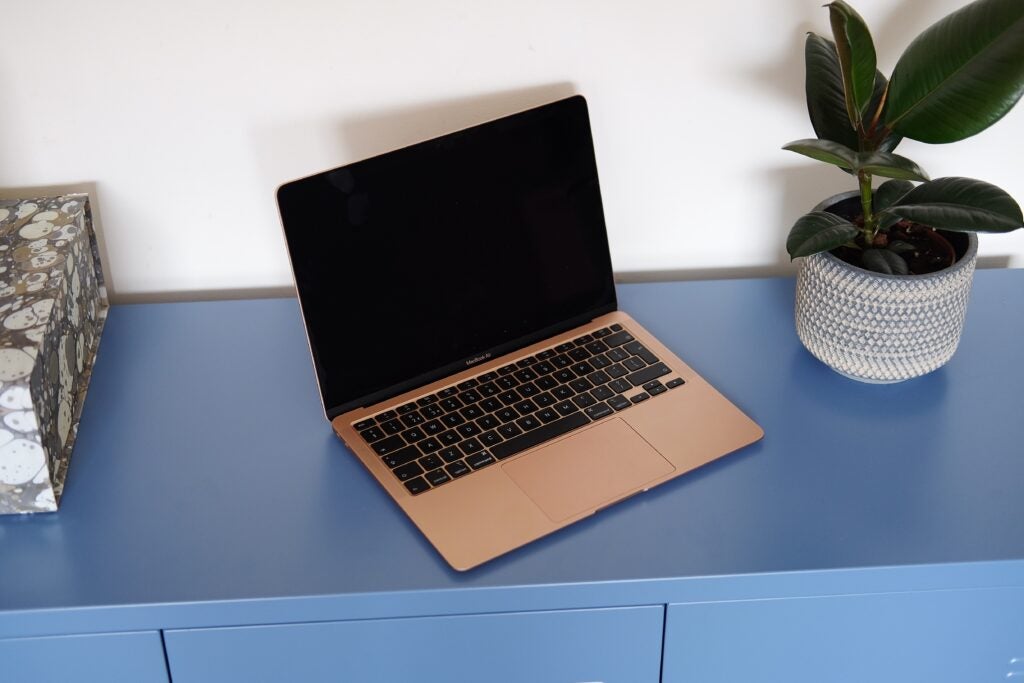 As with any MacBook, making a firm judgment on performance is tricky as there are multiple options available depending on how much you want to spend. There are two ‘off the shelf’ models available, one with a 1.1GHz dual-core 10th gen Intel Core i3 and another with a 10th-gen quad-core i5. There’s also a 1.2GHz quad-core 10th-gen i7 flavour available directly from Apple.

All models come with fast SSDs, with the base offering 256GB and maxing out at 2TB. You’ll have to pay an extra £600 for that model though, but at least it’s there. Both versions come with 8GB LPDDR4X RAM, with a 16GB add-on available too.

Throughout the review process, I have been using the base model with a dual-core 10th-gen i3 and 8GB RAM. It’s likely the most obvious choice, as it’s the cheapest and I’ve been impressed with what it can achieve.

It’s certainly no powerhouse, but as someone who spends most of the day with upwards of 30 Chrome tabs open, some sort of video call going and constant pings from Slack, it never felt slow or bogged down.

Basic photo editing in Lightroom is fine too, even with fairly large RAW snaps, and you’ll manage some light gaming in titles that aren’t graphically intense. I’ve had decent performance on Football Manager 2020, and there are some great games on Apple Arcade that all work well. There’s only Intel Iris Plus graphics here, so anything even remotely taxing will cause an issue. Though you’re probably not buying this for gaming, anyway.

If you want more power plump for the i5 version, though I can’t attest to what extra benefits that will give. That will also cost you £1299, which is significantly more expensive than the likes of the Surface Laptop 3 and Honor MagicBook 14, both of which saw superior multi-core benchmark results compared to the Intel i3 MacBook Air.

Still, it’s good to see Apple using the 10th-gen chips, with even some models of the MacBook Pro stuck on older 8th-gen versions. With Apple Silicon on the horizon, this could very well be the last MacBook to use Intel chips.

Along with the Intel chips, there’s Apple’s T2 chip in here too. This is where your TouchID data is stored and it also encrypts the SSD and enables Siri to be always listening for your commands.

The speakers are powerful and sound really good and I rarely found the laptop got hot when I was using it.

MacOS is the operating system of choice and the current version Catalina is about to be replaced by Big Sur. Apple’s Big Sur is a big deal, as it ushers in the Apple Silicon era with a new design that’ll be familiar to those who use an iPhone.

Some of the best macOS features bring together the whole Apple ecosystem. There’s Apple Arcade for gaming, Sidecar for extending your display over to an iPad and plenty of apps included like Pages, Garageband and iMovie.

Battery life – Merely OK, even if it’ll get you through a work day

If you’re waiting for a huge advancement in battery life on MacBooks, then you’re probably going to want to wait and see what Apple Silicon brings. That’s something I have mentioned a lot in this review, but Apple on the cusp of something entirely new with its own chips so there’s a lot up in the air.

Apple claims you’ll get 11 hours of juice from a single charge if you’re browsing the web, or 12 hours if you’re streaming Apple TV film playback. Looping a downloaded film, I managed to get just about to 11 hours, but no further.

That 11 hours of web surfing isn’t a particularly helpful metric, as you’re likely going to be doing other stuff along with your browsing. This is also with the Safari browser, rather than something like Chrome which I have been using.

I have managed to get through a full day of working from home without plugging the MacBook Air in. So that’s roughly 9am to 6pm of mixed use. Standby time is ace too, and you can leave the laptop unplugged and closed for days without the cell depleting. 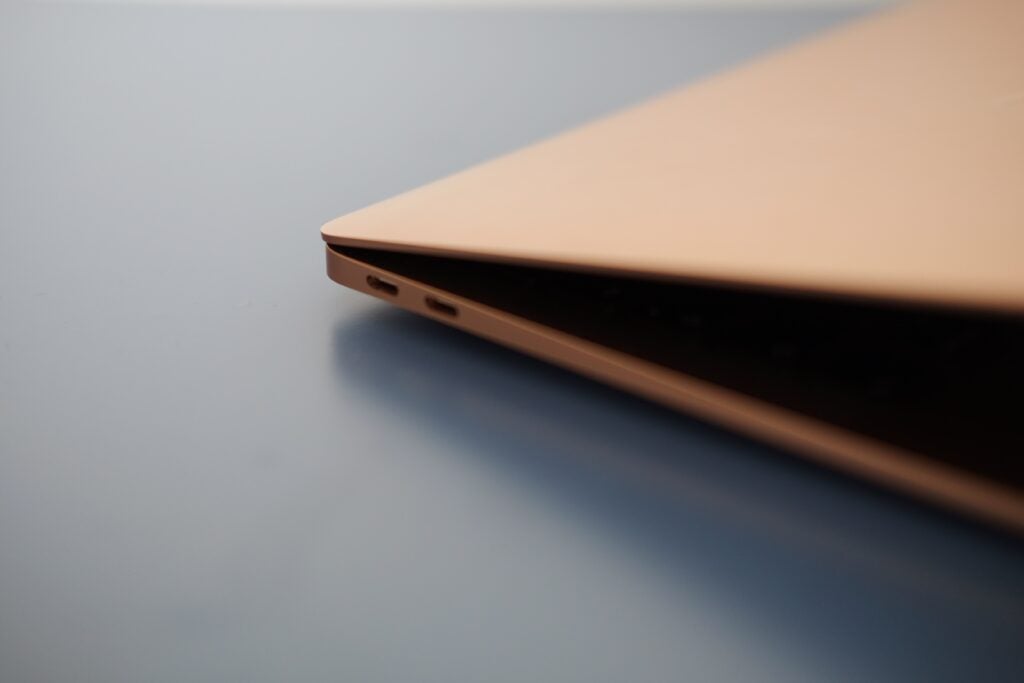 Does the MacBook Air have a USB port?

The MacBook Air does not feature any USB-A connection, but does have the newer USB-C ports. This means you’ll need an adaptor or hub to connect old peripherals or USB drives.

Does the MacBook Air have HDMI?

No, the MacBook Air does not feature HDMI, but it can still output an image to an external monitor via the USB-C port.

Does the MacBook Air have a camera?