The LG SN11RG brilliantly combines the sort of power and refinement you’d expect from a decent separates system with the living room-friendly design elegance and easy set up of a soundbar.

The LG SN11RG is a high-end audio package comprising a soundbar, a wireless subwoofer and two wireless rear speakers.

The system is designed with DTS:X and Dolby Atmos movie soundtracks in mind, complete with up-firing drivers in both the rear speakers and the soundbar itself

LG has put most of its design effort into the SN11RG package’s main soundbar. Which is fair enough given that its position under your TV means you’ll pretty much always be looking at it.

From the front it looks trim but long. So while it stays low enough to stay out of most TVs’ pictures, you might feel that it hangs off the edge of of your TV stand, unless that TV stand is at least as wide as a 65-inch TV.

The SN11RG is quite deep round the back, too – 146mm to be precise. So make sure you can fit it onto your TV stand as well as your TV. Unless you’re wall hanging both, of course. 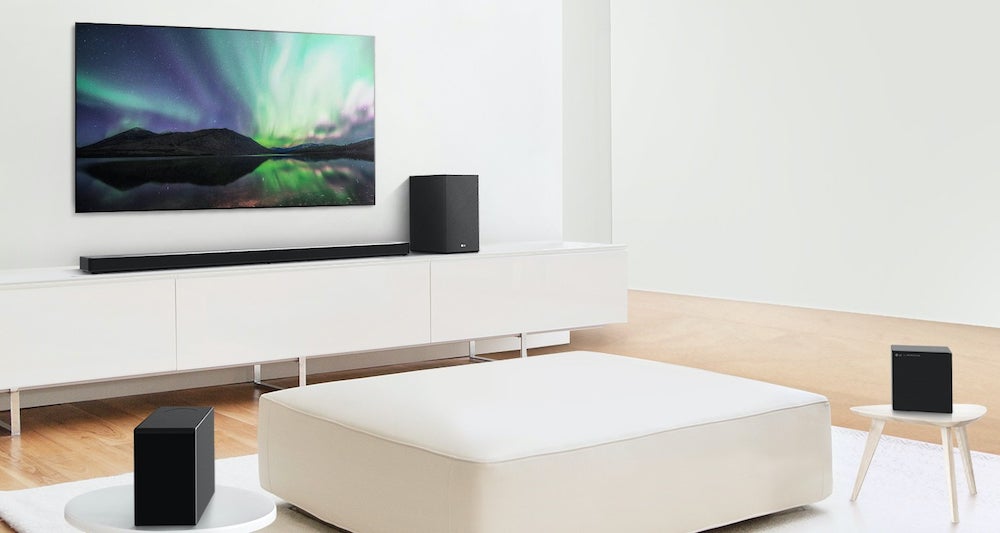 The width and depth of the SN11RG’s main soundbar make it pretty hard to miss. It does, however, provide plenty of air-shifting room for its seven channels of speakers.

LG also tries to make an asset out of its size by applying an attractive brushed metal-like finish to its top edge; a tasteful grille finish over its speakers; and an unusually pretty (and easy to read) LED to its front edge.

The LED makes it easy to keep track of sources, volumes, and sound formats. Part of it even changes colour to show when it’s listening to verbal instructions from you. It automatically dims down after a few seconds to stop it becoming a distraction.

The smooth top edge is broken by two attractively integrated up-firing speakers, while the grilled part of the design wraps around the soundbar’s ends to reflect the presence there of side-firing drivers.

The wireless rears are unusually big and heavy. Even bigger and heavier than those you get with Samsung’s HW-Q90R soundbar. They maybe aren’t quite as cute as Samsung’s, but they look promisingly serious. Crucially, the grilles on the top surface alert us to the presence of up-firing as well as forward-firing drivers.

The subwoofer in the SN11RG package is just a large black box, really, although that is how most subwoofers end up. And the relative lack of directionality of its sound means you can hide it behind a sofa or under a sideboard.

All the elements in the SN11RG package are reassuringly heavy and well built.

The biggest draw of the LG SN11RG is its combination of a true 7.1.4-channel speaker system, Dolby Atmos and DTS:X decoding, and 770W of claimed power. Especially as the SN11RG is the latest result of LG’s relationship with high-end British AV brand, Meridian.

This combination of features, particularly the inclusion of wireless rear speakers with up-firing drivers, makes the SN11RG a pretty direct rival for Samsung’s HW-Q90R soundbar system.

As well as the so-called object-based sound systems, the SN11RG supports hi-res audio formats up to 192kHz/24-bit, and can stream music from Spotify, Google Music, Deezer and YouTube via the Google Home app. 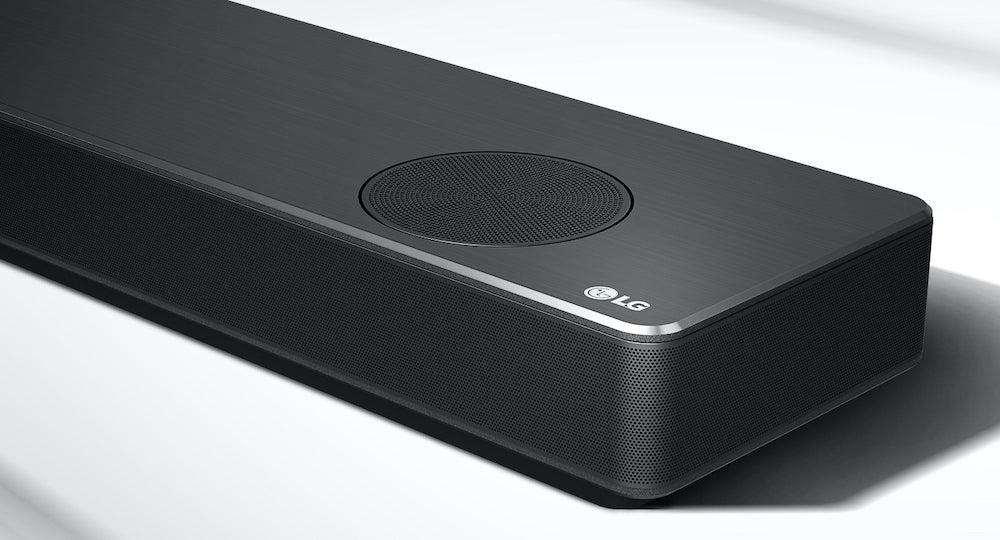 Connections comprise an optical digital audio input, a USB port capable of multimedia playback, two HDMI inputs, and one HDMI output. The output also supports the eARC system, whereby sound – including lossless Dolby Atmos and DTS:X soundtracks – can be fed back to the soundbar from the TV, as long as the TV’s HDMI input also supports eARC.

Naturally the soundbar can play audio wirelessly from Wi-Fi and Bluetooth sources.

When it’s not playing a Dolby Atmos/DTS:X source, the SN11RG can apply an AI Sound Pro mode that tries to optimise the way different sources sound. Plus there’s a Surround option that reconfigures stereo, Dolby Pro-Logic and 5.1 soundtracks to take advantage of all the unit’s 7.1.4 audio channels. The AI Sound Pro feature can be applied to all sources bar Atmos and DTS:X regardless of whether the Surround function is on or off.

An auto-calibration option (activated through LG’s Wi-Fi speaker app) enables the SN11RG to adjust its sound to suit your room conditions and, finally, the SN11RG’s HDMI passthrough supports 4K HDR, including Dolby Vision. It does not, though, support the HDR10+.

First time setup of the LG SN11RG is mostly easy. The speakers connect wirelessly with each other instantly and effortlessly. The soundbar’s connections are clearly labelled, if a little awkward to access. The remote control is small, but mostly makes a virtue out of its low button count.

The only annoyance is the way you need to add both Google Home and LG Wi-Fi Speaker apps to your phone or tablet to make the rest of the installation process easy. Once you’ve done that, the set-up process becomes a lot smoother. Note that Google Home also provides Google Assistant voice control. 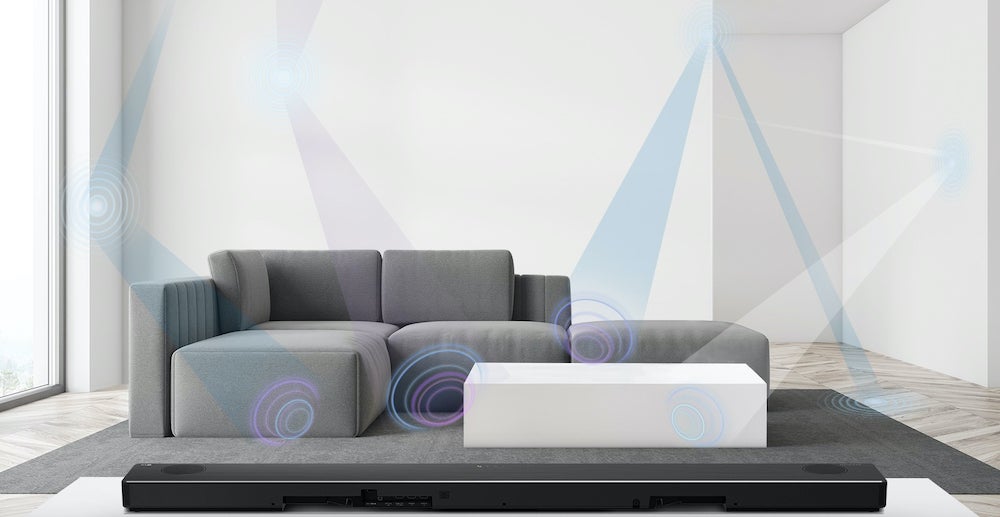 The SN11RG supports an auto-calibration system that adjusts the sound to suit your room layout.

Be sure to take advantage of the LG Wi-Fi Speaker app’s auto-calibration feature. This makes a palpable difference, and takes just seconds to run.

Most of the SN11RG’s sound options and features are self explanatory. One potentially confusing one, though, is the Surround option. This is on by default, meaning that all non-Dolby Atmos and non-DTS:X sources, including 2.0 stereo, will be upconverted to fill most if not all of the SN11RG’s speakers. If you’re a Hi-Fi purist you’ll need to remember to turn this feature off (by holding down the ‘levels’ button for three seconds, and then pressing it again when the OFF-SURROUND wording is scrolling across the soundbar’s LED).

The LG SN11RG is literally made for a good Dolby Atmos or DTS:X film soundtrack, so it’s a relief to find it handling such sources brilliantly.

The first thing that hits you is how large the soundstage is. It fills your room, both front and back, with just the sort of three-dimensional audio space Dolby Atmos and DTS:X thrives on.

This 3D space is startlingly complete, with the sides, rear and even the height channels all making their presence clearly felt. The SN11RG’s drivers are so well balanced, too, that each part of the soundstage feels equally compelling. There are no holes in the soundscape, and no sense of any channels being noticeably feebler than any others.

All of this adds up to an exceptionally immersive audio experience that puts you right at the heart of the action, taking your enjoyment of films and Dolby Atmos games to a whole new level.

Previous LG soundbar/subwoofer combinations I’ve tested have tended to sound light on bass. This is not the case with the SN11RG, however. Its subwoofer consistently inserts itself aggressively into rowdy action scenes, or provides potent underpinning to crashing seas or throbbing spaceship engines.

The dynamic range of the other speakers is impressive, giving the system plenty of headroom to expand in line with escalating action soundtracks. Despite its power and dynamism though, the soundbar and rears are sensitive enough to place spatial effects within the 3D soundscape with excellent precision. 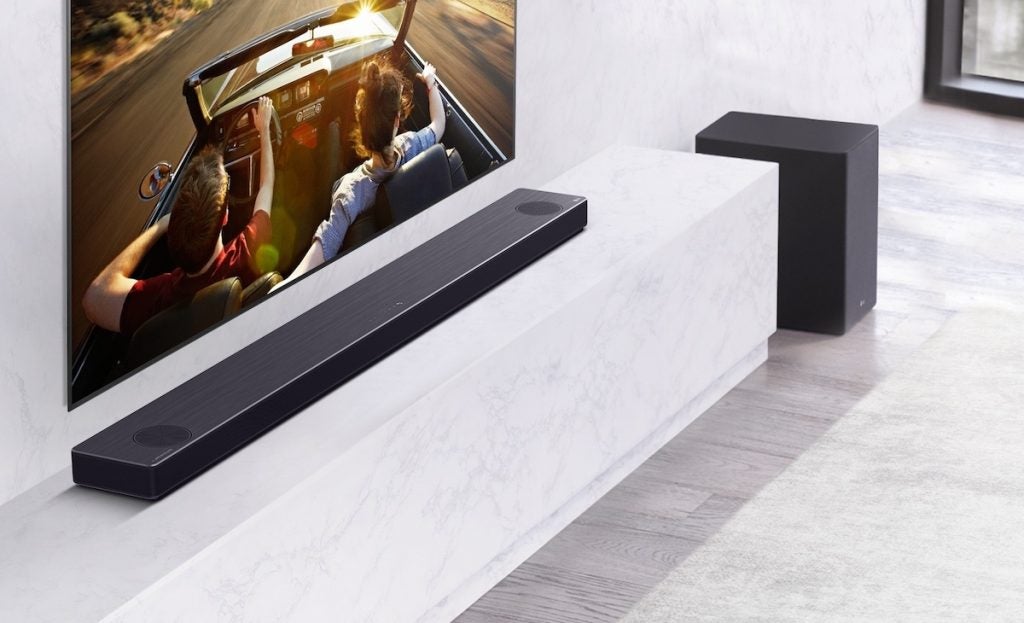 It’s not just movies and games with Dolby Atmos or DTS:X that benefit from the SN11RG’s brilliantly created 3D soundstage either. The Surround processor – especially when used in conjunction with LG’s AI Sound Pro feature – does a remarkably good job of mixing less generously channelled sources to the SN11RG’s 7.1.4-channel configuration. It actually sounds like there’s a degree of stereo separation in the rears with 4.1 and stereo sources, for instance. And there’s always at least a sense of ambient sound in the height and side channels.

Some AV fans will never be OK with the sort of remixing the Surround and even the AI Sound Pro modes do, though, so it’s handy that the SN11RG also sounds very good when sources are left in their native state.

Stereo music, in particular, enjoys a genuine Hi-Fi feel. Subtle details are well delineated, with wide but controlled stereo separation. Vocals are rich. The tone is warm and musical. And the subwoofer ties in with the low register of stereo music more subtly and effectively than expected given its gutsy movie work.

While the SN11RG is typically a potent home cinema machine, it’s not completely without issue. Vocals, for starters, sometimes aren’t dispersed vertically quite well enough. As a result, voices can sound slightly dislocated from the mouths of the people speaking.

While the subwoofer can go loud and deep, it doesn’t offer much variation in its rumble level. As a result it can sound slightly unrefined during scenes that contain a mixture of ambient and specific bass effects.

My final complaint is that the SN11RG can be too restrained with aggressive spot effects during already-loud moments. Punches, gunshots, shattering glass and the like don’t always leap out as emphatically as they should.

You should buy the LG SN11RG if…

This a soundbar purpose built to deliver on the ‘full’ Dolby Atmos experience, and it does it in a wonderfully immersive way.

No separates system, though, will give you the space-saving elegance of the SN11RG’s main soundbar, or the simplicity and tidiness of the SN11RG system’s wireless connectivity.

You shouldn’t buy the LG SN11RG if…

At £1,499 the SN11RG is not cheap. In fact, you could potentially put together a pretty effective separates-based audio package for that sort of money.

The Q950T may not boast the power in terms of specs, but it’s an even more accomplished object-based audio performer.

The subwoofer can sound unrefined at times, and there’s also an issue with hard-hitting impact sounds lacking some finesse, too.