If you feel the audio from your TV lacks the punch to do justice to movie soundtracks and even day-to-day TV fare, but the other half doesn’t like the idea of cables running across the floor to accommodate a full surround sound system, it might be time to start investigating soundbars. If you do, the LG NB3520A should be on your list. It’s a combined soundbar and subwoofer package designed for use in larger rooms. It’s capable of pumping out a pretty fearsome 300 watts of sound, but is still quite reasonably priced at £300.

LG NB3520A soundbar not for you? Check out our round-up of the best soundbars to buy

Design
Unlike other options, such as the Sharp HT-SL70 or Panasonic SC-HTB550, this is a traditional soundbar in that the bar comes as a single unit and can’t be split into two separate speakers. Included in the package is an active subwoofer that connects back to the soundbar wirelessly over Bluetooth, which means that you can hide the sub away in a corner or under a side table and not have to worry about running a speaker cable to it. 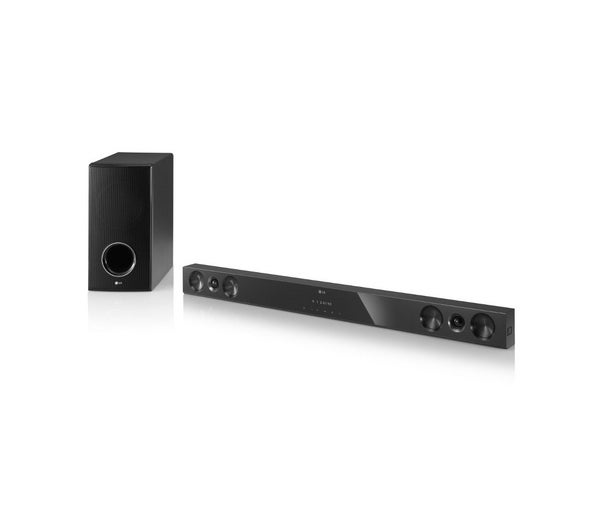 The main bar is relatively large. It’s 80mm tall and 50mm deep, so it’s not quite as unobtrusive when sitting under you telly as some of the bars with more low profile designs such as the Sharp HT-SL50. However, it’s still a good-looking unit thanks to the piano black finish on the front and its exposed speaker drivers.

In the centre of the bar there’s an LED screen, but this is thankfully dimmable, so it won’t distract you when you’re watching TV or a movie with the lights turned down. Beneath the screen sits a row of touch buttons for power, volume control and switching between the various inputs and sound modes.  The system also comes with a good-sized remote control with chunky buttons that not only allow you to adjust the volume level, but also flick between the different inputs and sound modes and control the level of the subwoofer.

The subwoofer unit is a bit of a beast of a thing measuring 390mm tall and 360mm deep. It’s not the best looking subwoofer we’ve come across as the combination of the metal grill on the front and the chrome ring at the bottom looks a bit dated. Nevertheless, as it’s wireless, it’s pretty easy to hide out of the way. 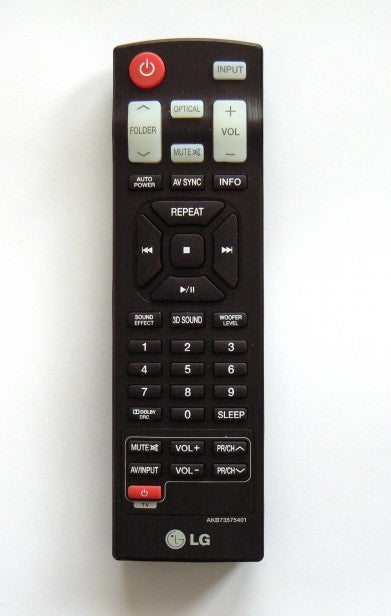 Connections
The LG NB3520A is surprisingly limited when it comes to AV inputs. Most other soundbars have a number of HDMI ports, but that’s not the case here. In fact, all that’s on offer are two optical inputs for digital audio and a mini-jack input for analogue audio.

There’s not really much difference between using an optical cable and a HDMI cable in terms of audio quality, as the bar doesn’t support HD sound formats like Dolby TrueHD anyway. However, there is one major downside to not having HDMI — the unit can’t be controlled via CEC, so you can’t use your TV’s remote to control the volume of the soundbar.

Setup
Setting up the LG NB3520A is very easy.  Both the subwoofer and soundbar need to be plugged into the mains and then it’s really just a matter of running an optical cable from the digital audio output on the back of your TV, Blu-ray player or set-top box to one of the two optical inputs in the rear of the soundbar. You can also feed another analogue source in using the mini-jack connector.

The bar also supports wireless audio streaming. Rather than going the Apple AirPlay route and relying on Wi-Fi, LG has perhaps sensibly opted for Bluetooth instead. Standard A2DP Bluetooth streaming may not offer as good audio quality as AirPlay (it has limited bandwidth to play with and so compresses your music), but it’s compatible with many more devices including most smartphones and tablets on the market today. 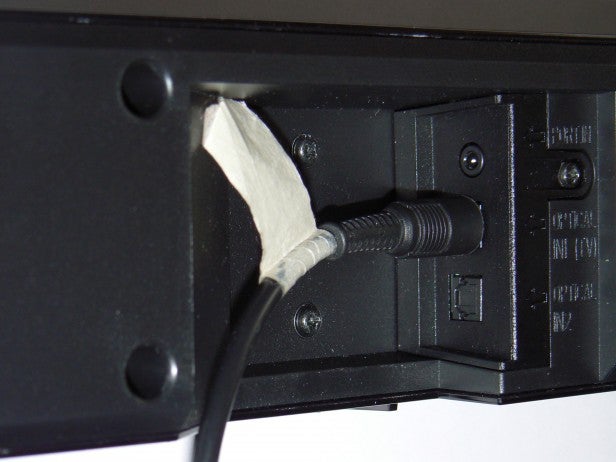 Setting it up to work with Bluetooth was a piece of cake, too. We tried it out with a Windows Phone handset. All we had to do was select Bluetooth as the input on the soundbar using the remote, switch on Bluetooth on our phone and then select LG Audio option when the phone found the soundbar. Music streamed from the phone to the soundbar actually sounded very good – crisp and meaty – with the bar doing a good job of masking some of the limitations of Bluetooth audio.

Interestingly, there’s also a USB port on the right hand edge of the bar. If you plug in a USB drive or memory keys containing MP3 or WMA (non-DRM) tracks you can play them back through the system. The navigation of tracks and folders is not too bad, as there are dedicated buttons on the remote to let you move up and down through folders. Nevertheless, it’s only really suitable for use with USB keys containing a few albums’ worth of tracks, as larger libraries on USB hard drives can become a bit unwieldy to navigate through.

Naturally the decoder is built into the main soundbar unit. It can handle PCM, Dolby Digital and DTS formats, but not higher quality audio such as Dolby TrueHD feeds. The unit automatically detects incoming streams and switches to the appropriate decoding mode. There’s a switchable 3D pseudo surround sound mode, as well as a number of preset EQ modes including ‘ClearVoice’, which boosts the centre channel, ‘Bass’, which cranks up the bottom end, and ‘Night’, which reduces the gap between the loudest and quietest sounds in the mix when you’re watching TV at low volume.

The LG NB3520A sounds about a million times better than the audio that even the best-sounding slim-line TVs can deliver. The subwoofer is especially powerful, delivering considerable bass kick that really brings low-end effects in movies for explosions or gun battles to life with significant sonic thuggery. It can be a tad boomy at its standard setting, but turning down the subwoofer volume level a tad balances it out nicely with the speakers in the main soundbar. 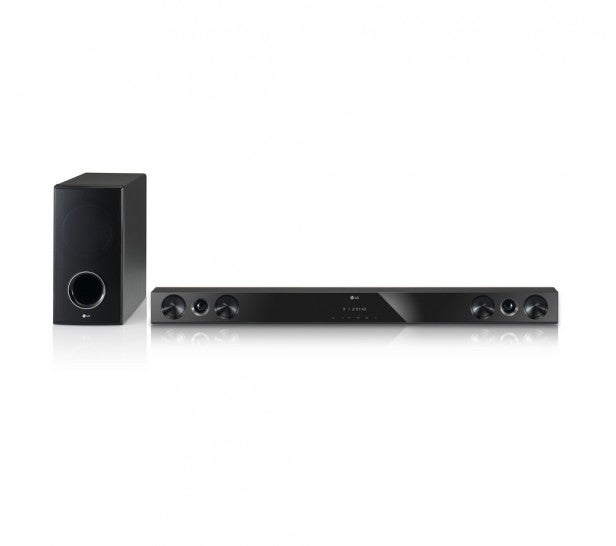 The soundbar itself also delivers pretty tight and focused audio and is strong, not just for mid-range performance, but also when dealing with the higher frequencies. This helps it to deliver dialogue with plenty of presence, and also means that it’s a good performer when faced with music tracks.

That said, like a lot of mid-range soundbars, its claimed “3D” sound effect isn’t particularly convincing. It does widen the soundstage a bit to deliver a pleasing effect, but it can’t create a virtual rear channel in the way that Yamaha’s more expensive soundbars can. Also, the 3D mode only really works properly when the original source is a multi-channel soundtrack. Turning it on for standard, stereo soundtracks on TV shows makes the audio quite treble-heavy and brittle.

Verdict
The LG NB3520A is a strong soundbar offering from LG. It looks attractive, and thanks to its reasonably-sized display, it’s also easy to use. The system offers a good range of features too, with Bluetooth support a particularly welcome addition. The 300 watt total power output also means it’s capable of delivering neighbour bothering levels of audio even when used in larger rooms. While the 3D sound mode could be better, on the whole it delivers satisfying sonics.