The picture quality of slim-line TVs has steadily improved over the years, but sometimes it seems like their audio quality has been getting progressively worse. As chassis have become slimmer, manufacturers simply have less room to play with when trying to cram speakers into their sets.

The obvious cure is to use an external sound system. If don’t want to go the route of a full surround sound set-up, then a soundbar or 2.1 system is often a more acceptable option. Previously you had to choose between the two, but with the Panasonic SC-HTB550, which is priced at around £400, you now get both options in the same package. 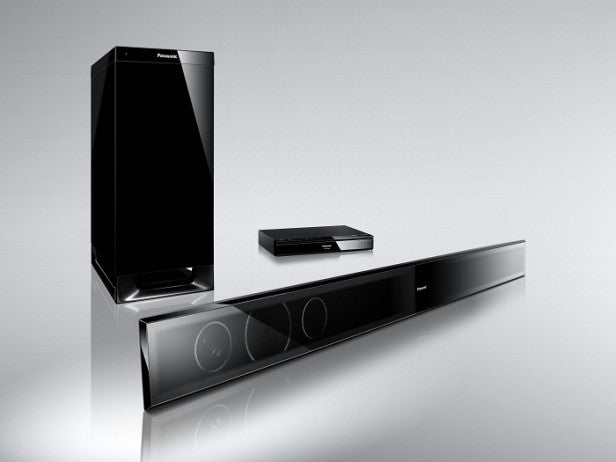 The key to the HTB550’s flexibility is that the speakerbar is now actually made up of two separate elements, so it can either be bolted together and used as a soundbar or the two parts can be mounted on traditional speaker stands and set up as a 2.1 system.

The bar comes disassembled in the box, but putting it together in its soundbar configuration is straightforward. All you have to do is slide a metal retainer bracket between the two and then tighten four screens on the rear to hold it in place. If you’d prefer to use it as a more standard stereo system, you can plonk the two individual speaker parts on the supplied stands and, voila, you have a standard 2.1 set-up.

This new flexibility does mean that there’s an extra box added into the equation, as the amp and processor are no longer built into the bar. This small black box connects back to the stereo speakers via two separate cables, but it links wirelessly to the active subwoofer that’s also part of the package.

The design of the soundbar is actually quite attractive, as it’s finished in glossy black with a grill covering the front of the speakers. This grill is semi-transparent, and you can catch a glimpse of the six speaker drivers from the front. The subwoofer is relatively small too, measuring 404x77x298mm, and it houses a downfiring woofer. It’s also finished in gloss black and looks about attractive as a sub can be. 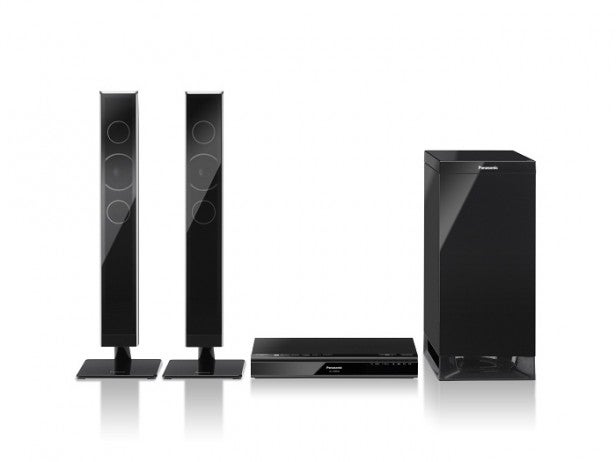 The breakout box, on the other hand, is a mini DVD player size. On the top edge there’s a row of buttons which include the on-off switch, volume up and down controls and an input selector button. Unfortunately, it lacks a proper display. Instead small LEDs are used to indicate which input is active and which audio mode has been selected from the three options – Dolby Digital, DTS or PCM. The lack of a screen becomes slightly annoying when you’re adjusting stuff like the subwoofer and centre channel levels, as the audio mode lights have to flash in various patterns to show the current volume level, which isn’t ideal.

In fact, the control of certain elements of the unit can be a bit obtuse. For example, to change between the different surround sound effects – clear dialogue and 3D surround – you have to press and hold the TV button on the small credit card sized remote and then press the volume up button. You’d hardly describe that as intuitive. The system also has an Auto Gain control, which allows you to smooth out volume level differences between, say, TV shows and adverts. However, accessing this mode is also a bit of a pain as you have to press and hold the input selector on the remote for two sections and then press it again to actually change the mode.

Nevertheless, when it comes to connection options the breakout box on the Panasonic SC-HTB550 scores highly. Around the back you’ll find three HDMI ports – two inputs and one output port – so you can connect up two external devices, such as a set-top box and Blu-ray player, to the system and have the video routed back to your TV.

However, if you have a newer TV with a HDMI port that supports Audio Return Channel you only actually have to run a single HDMI cable between this port on your TV and the output port on the breakout box. After that, all HDMI devices connected to your TV can have their audio routed to the breakout box via this single cable. 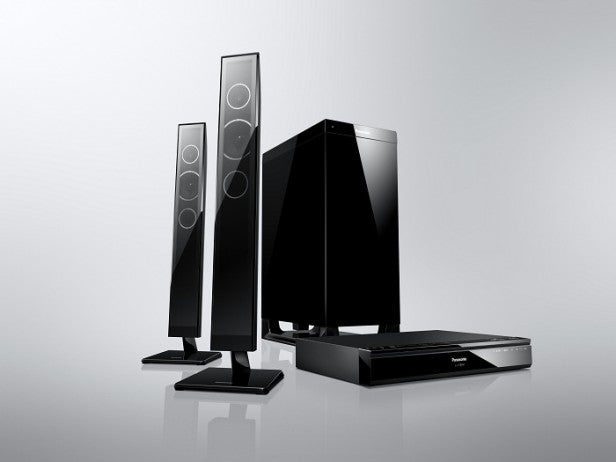 The rear of the decoder box is also home to two digital audio optical inputs, so you can also run audio from non-HDMI devices into it. What’s more, Panasonic has added Bluetooth support, so if you have a phone or MP3 player that supports Bluetooth A2DP audio streaming, you can pair it with the system and play tracks through the Panasonic HTB550’s speakers. This is a cinch to setup and worked really well during our testing.

So how does the whole system sound once it’s up and running? Pretty impressive is the short answer. The subwoofer does a good job of recreating low end effects in movie soundtracks, adding significant bass punch without sounding lazy or flabby like some weaker subs do. As a result explosions and car crashes have much more sonic impact than what you’ll get from even the best sounding flat screen TVs. The sub also blends well with the sound from the main speaker bar, so the two really do sound like they’re working in harmony rather than competing with each other. 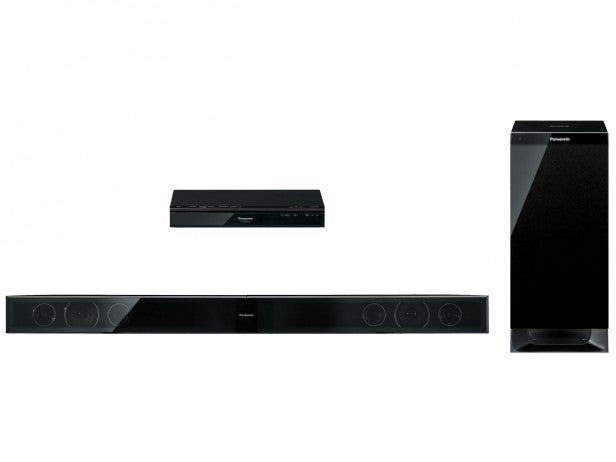 The main speakerbar has good stereo separation, so soundtracks do have plenty of stereo width. It also does an excellent job of delivering punchy and clear dialogue and you’re given good control over just how prominently the dialogue channel sits in the system’s overall sound mix.

On the downside, although the system’s pseudo 3D surround effect is pleasing, it’s no match for a real surround sound set-up or even Yamaha’s hugely impressive YSP-2200, when it comes to recreating rear channel sound. To be fair, though, the latter is double the price of the HTB550, so that comparison is a bit unfair, and the HTB550 is on-par with other similarly priced systems from the likes of JVC, Samsung and Pioneer.

Verdict
The SC-HTB550 is a major step up from last year’s SC-HTB520, not just in the flexibility of its design, but also in the array of connections on offer. Changing some of the more in-depth settings can be a bit obtuse, but most of the main features are still easy to use. And when it comes to delivering good bass effects and clean, clear dialogue, it’s up with the best soundbars we’ve tested. As a result, if you’re looking for a modestly priced soundbar or 2.1 system, we think it’s a good option.