We follow our review of Sharp’s impressive HT-SB250 soundbar with another of the company’s clever home cinema solutions. This one is aimed at those who want more power than a standalone soundbar can deliver, without taking up loads of extra space in your living room.

The HT-SL70 is a 2.1-channel home cinema system that not only comes with the world’s slimmest soundbar, but also a separate subwoofer that delivers 100W of bass oomph. It’s designed to integrate with flatpanel TVs with screen sizes between 46 and 52in, and comes with a flexible array of installation options. The soundbar itself comes in two parts, which can either be joined up to create a single TV-width soundbar, or mounted vertically on the supplied stands. 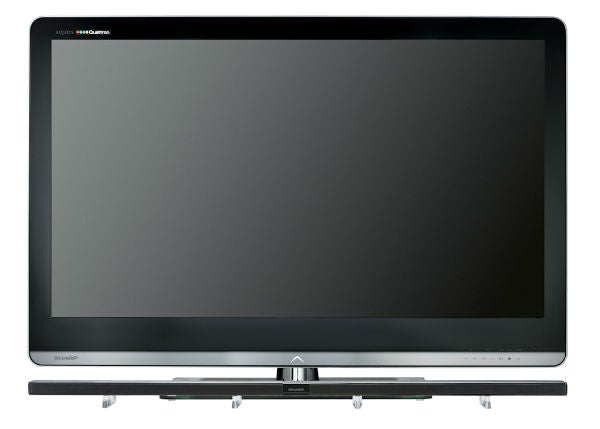 The HT-SL70’s plasticky casing makes it feel less robust than the HT-SB250, but it’s solid enough. It is incredibly slim and compact though, measuring just 26mm high and 50mm deep. Placed on the wall or stand below your TV you’ll hardly notice it’s there, while the tasteful black styling also helps it blend in with its surroundings. There are no connections on the back except for springclip terminals for the supplied speaker cable – all of the sockets are found on the back of the powered subwoofer. 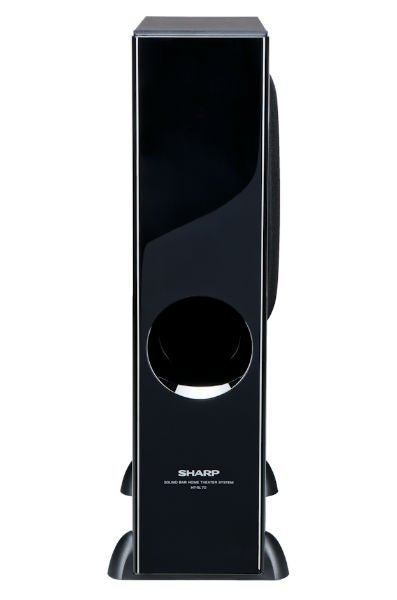 Finding room for the subwoofer shouldn’t be a problem thanks to its remarkably slim design. The box measures 115mm wide, which makes it easy to slide into tight spaces. The gloss black finish is easy on the eye too. On the back are two HDMI sockets, one input and one Audio Return Channel compatible output. The latter plays a crucial role in the operation of the system, as we’ll explain later. These HDMIs are joined by a 3.5mm minijack input and springclip terminals for the speakers.

Usually, systems like these can be installed without so much as a glance at the manual, but the HT-SL70 isn’t entirely self explanatory. The main thing to bear in mind is that it’s primarily designed for use with TVs equipped with Audio Return Channel and CEC functionality thanks to the HDMI v1.4 sockets.

That means you have to connect the subwoofer’s HDMI output to the ARC-compatible input on your TV, then connect your Blu-ray player to a separate HDMI input on your the TV. Sound from the player, tuner or any other device connected to the TV is passed to the HT-SL70 and output through its speakers, while the volume is controlled using your TV’s remote though the magic of CEC. 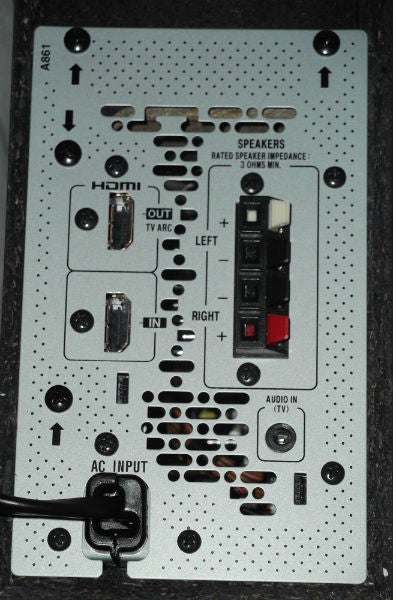 Confused? So were we. It’s all a little convoluted at first, but the ‘set and forget’ nature of the product means you won’t have to worry about it again once installed – the HT-SL70 acts like an extension of your TV’s speakers.

You’ll find loads of accessories in the box. There are two plastic clips for joining the two halves of the soundbar together – the shorter clip makes it match the typical width of a 46in TV, while the longer clip inserts a bigger gap between them for 52in sets. When mounting on a TV stand, you get transparent plastic feet that clip onto the back of the soundbar, but these look cheap and ugly. 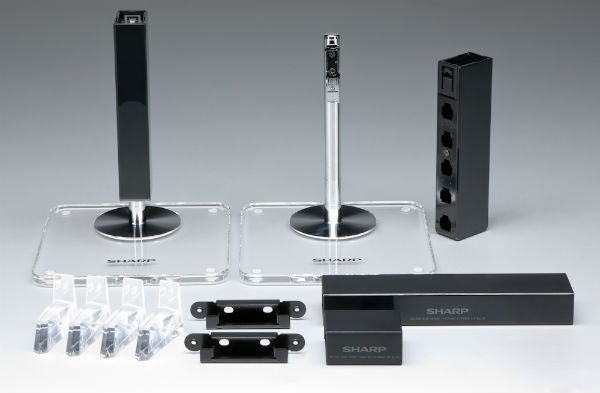 Meanwhile the supplied floorstands let you mount the left and right speaker sections vertically, in a more traditional 2.1 arrangement. The stands look fairly chic with their transparent bases and silver poles – which boast a cable tidy feature – and it’s easy to attach the speakers using the clips. You also get all the brackets you need to mount the soundbar on the wall, making this a very versatile system.

Configuring the HT-SL70 simply involves turning on CEC in your TV’s setup menu. There are no controls on the subwoofer and there’s no remote control – the only thing you need is your TV remote. Even if you don’t have ARC, the volume can be controlled using your TV zapper, provided the TV’s headphone output is rigged up to the subwoofer.

Inside the soundbar are six full-range speaker drivers, with a 16cm woofer in the side-firing sub. On board power is quoted as 200W, with the sub’s digital amplifier supplying 100W to the soundbar and 100W for itself. There’s no on-board decoding for Dolby Digital or DTS, nor are there any processing modes, although High Definition Sound Standard technology helps keep the sound free from distortion.

The HT-SL70 is a decent performer, offering a more fulsome sound than you’d expect from such a slim unit. OK, it’s not likely to shake the picture frames off the walls but it goes reasonably loud and voices movie soundtracks with a crisp and detailed character.

The pivotal train crash scene in Super 8 is a great test, with its cacophony of crashing metal and explosions, and the HT-SL70 does a solid job of reproducing them without lapsing into unbearable harshness or distortion like some budget soundbars. If anything it could do with a little more aggression and bite to up the excitement factor. 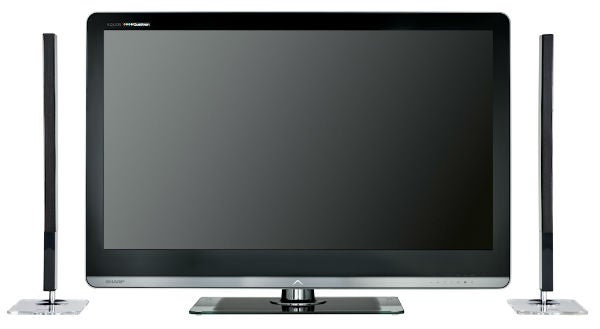 On the downside, the sound is a little thin and doesn’t integrate very well with the subwoofer. The sub’s timing is spot-on, but low-frequency effects are a flat rumble that sounds disjointed from the midrange. It certainly lends greater depth and power to the scene’s explosions than your average flatpanel TV, but if you really want a true thrill ride you’ll need to step up to a proper home cinema setup or a more accomplished soundbar.

Its handling of TV material is also disappointing in places. The applause of the Loose Women studio audience sounds thin and hissy, and theme tunes blare out with less control than we’d like. That said, dialogue sounds clear and open. 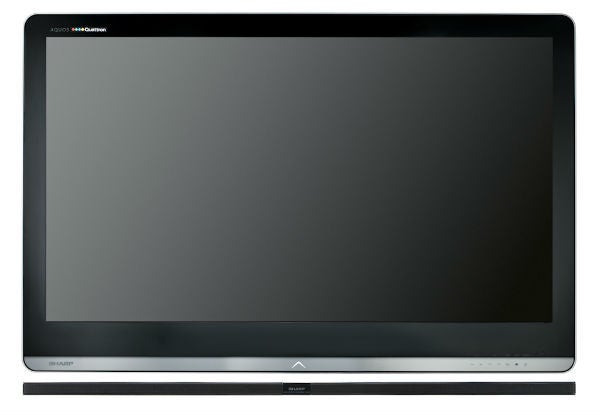 We also tried out some music for good measure and the results are pleasant, with good timing and clean detail, although again it’s a bit too thin and unrefined to satisfy audiophile tastes.

”’Verdict”’
The HT-SL70 is an unusual but versatile soundbar system, which can be installed with minimal disruption to your décor. We love the choice of installation options – floorstand, wall or tabletop – and the super-slim dimensions of soundbar and sub means they can be discreetly integrated into the room.

And for the most part, the system’s performance is pleasing. It offers a significant sound upgrade over flat TV speakers with its loud volume and crisp detail. But its performance is spoilt by the disjointed subwoofer and a lack of body in the midrange that leaves the sound a little thin. If you can live with that, then the HT-SL70 could be a very attractive home cinema problem solver.