As the first company to bring largescreen LCD TVs to the masses, Sharp knows only too well the perils of poor sound quality from flatpanel TVs. We love their slimness, their jaw-dropping looks and eyeball-piercing pictures, but when it comes to blasting out a movie soundtrack they’re flatter than Keira Knightley’s corset.

So it comes as no surprise to find that Sharp has a number of audio solutions under its belt, designed to boost the power and clarity of movies and TV shows while blending in seamlessly with their surroundings. And they don’t come any more discreet than a soundbar. The HT-SL50 is one of three soundbar systems in Sharp’s range, one of which we’ve already reviewed – HT-SL70 – as well as the HT-SB250 standalone soundbar. 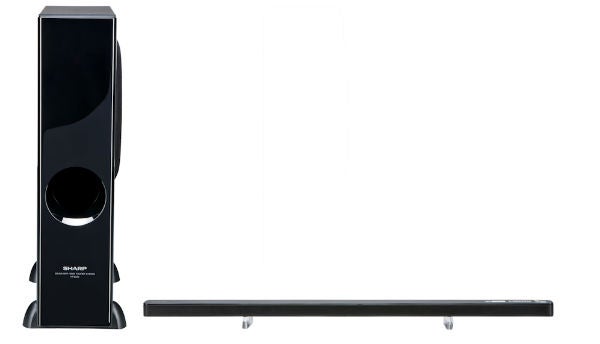 The HT-SL50 is fairly similar to the HT-SL70 in that it features an amazingly slim soundbar and separate powered subwoofer, but this time there are some significant design differences. For starters, the SL50 includes a completely different soundbar than the SL70 – this one is a single unit, whereas the SL70’s soundbar could be split into left and right speakers and perched on a pair of supplied floorstands.

You can, however, still mount this soundbar on the wall (all the relevant brackets are supplied in the box) or place it on top of or inside a TV rack by clipping the supplied feet to the back. It’s a well built piece of kit, weighty and solidly bolted together, plus its slinky dimensions seem to defy physics.

Being the world’s slimmest soundbar at just 26mm high, there isn’t much of it, but Sharp has styled the svelte cabinet in a gorgeous gloss black finish that’s a perfect match for our Samsung LCD TV. On the wall, all you can see is the speaker mesh on the front. The 50mm depth means it shouldn’t stick out further than your TV when wall mounted, and at 801mm wide it’s best suited to TVs between 32 and 40in in size.

As for the subwoofer, it’s aesthetically identical to the SL70’s. It’s taller and slimmer than your typical subwoofer, which theoretically makes it easier to slide into spaces in and around your TV. It’s easy on the eye too with a suitably neutral black finish, a side-firing driver and a standby LED on the front. 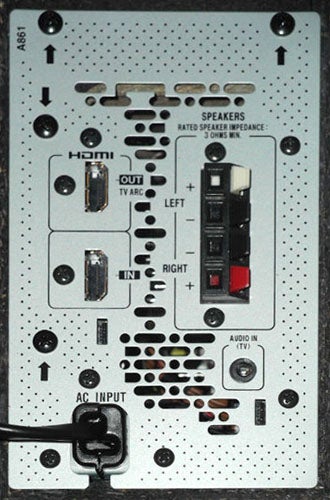 Naturally the subwoofer is the system’s hub. On the back you’ll find a panel of connections, including two HDMI sockets – one ARC(Audio Return Channel)-compatible output and another input. There’s also a 3.5mm minijack input and a pair of springclip terminals to hook up the soundbar to the subwoofer using the supplied cables (there are also springclips on the soundbar).

Some soundbars act as full-on home entertainment hubs, acting as a junction for all your other equipment and sometimes offering multichannel audio decoding. If that’s what you’re after, up your budget and look elsewhere. This is a much simpler proposition, designed as a dedicated add-on speaker for your TV.

It’s primarily designed to work with the latest generation of 3D-compatible TVs, which boast ARC and CEC (Consumer Electronic Control) functionality. It doesn’t come with a remote control – volume is adjusted using your TV’s handset thanks to CEC.

Setup is simple. Hook up the HDMI output to the ARC-compatible input on your TV, and connect your Blu-ray deck (or other device) to another of your TV’s inputs and away you go. Audio signals from the Blu-ray deck and other devices connected to the TV are fed to the SL50 through the ARC HDMI connection, while CEC makes it possible to alter the SL50’s volume using your TV’s remote control – make sure it’s activated.

Alternatively if your TV lacks ARC, you can connect the TV’s headphone output to the subwoofer’s minijack input, which still allows you to control the system’s volume using your TV remote’s handset. It’s a rudimentary solution but it works. Should you need to channel your Blu-ray player through the SL50’s HDMI input/output for any reason, then rest assured that it’s 3D compatible.

Overall power output is quoted as 100W – that’s 2 x 25W for the left/right speakers inside the soundbar and 50W for the subwoofer. That’s a good 100W less powerful than the HT-SL70, which was designed to accompany much larger TVs. Inside the soundbar are two 2.2cm full range drivers, with a 16cm bass driver within the sub.

Just like the HT-SL70, the SL50’s sound quality is a vast improvement on most plasma and LCD TVs, offering a loud sound with plenty of attack, but there are a couple of flaws that slightly marred our enjoyment. Channelling our Blu-ray deck through an ARC-compatible TV, we had no problems getting it to work and it does a solid job of bringing Rise of the Planet of the Apes to life.

Also, as mentioned, there’s a decent sense of dynamism behind the movie’s dramatic scenes – when Bright Eyes the chimp makes her escape from the lab, the sense of chaos is communicated with a suitably crisp, forceful sound.  At a normal listening volume, windows smash and apes shriek without testing the limits of your aural tolerance, while speech reproduction is surprisingly good. Yes it lacks the authority and smoothness of a decent 2.1 system, but considering the diminutive size of the drivers and the lack of cabinet volume, its overall performance is relatively impressive.

However, push it too loud and some of the high-pitched effects begin to sound abrasive, and prolonged loud listening can be fatiguing. And although the subwoofer is essential, lending punch to the pounding fight scenes and a touch of depth to deep voices, it doesn’t integrate well enough with the soundbar and its bass notes are a single, amorphous rumble. More sensitivity and agility would have made all the difference – in many ways it’s all that one would expect for such a modestly priced system.

We also tried it out with TV material and the extra bass clout, combined with the soundbar’s pleasing dynamism, made shows like Earthflight and Sherlock even more engaging than usual, but roaring crowds during football matches and audience applause sounded rather thin and hissy.

”’Verdict”’
If you’re looking for a way of improving your TV’s sound without cluttering up your living room with boxes, then the HT-SL50 is worth considering. It sounds thin at times and strains at high volumes, plus the subwoofer isn’t much of a team player, yet the overall dynamism and bass punch it affords makes these flaws easier to swallow – all the more impressive given the slimness of the soundbar. It’s also incredibly discreet, easy to install and setup and best of all, at £120 (approx) it won’t bother your bank balance much.