Tragically, just as interest in 3D – on TVs at least – seems to be on its death bed, we’re starting to see some truly outstanding 3D TVs. The combination of a passive 3D system (with its freedom from flicker and, if you keep your vertical viewing angle small, crosstalk ghosting noise), native UHD resolution and OLED’s gorgeous contrast performance works wonders on any 3D Blu-ray you care to throw at the 55EG960V, delivering pictures of gorgeous sharpness, clarity, depth, brightness and vibrancy. 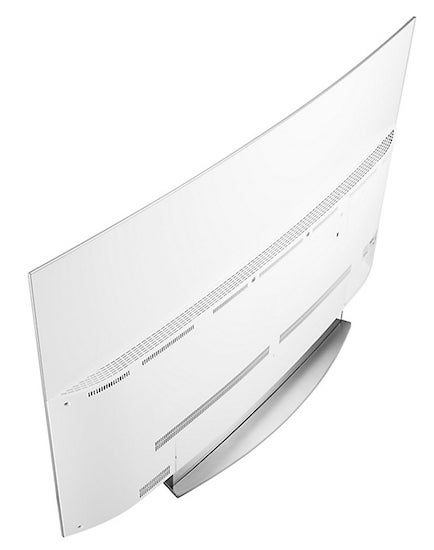 If 3D on TVs had always looked this good, the format’s fortunes may have been very different.

The 55EG960V doesn’t benefit from the same 40W, Harman Kardon-designed speaker system somehow fitted into the 65EC970V. As a result it fails to reach the same sort of volume levels comfortably, and sounds noticeably more cramped in the mid-range when the audio going gets tough. There’s nothing spectacular about the amount of treble detailing you hear in the soundstage either, and deep bass is a bust.

Voices still sound clear even if the rest of the mid-range starts to sound a bit muddy, though, and at least the 55EG960V is sensible enough to work within its limitations, ensuring that the speakers don’t distort or phut.

It’s worth noting that during our tests the TV tended to suffer a little with lip-sync errors when watching Blu-rays, though thankfully we were able to solve this problem almost completely via the AV Sync Adjustment options.

The 55EG960V comes with one of LG’s ‘magic remotes’, which let you select onscreen options just by pointing the remote at the relevant part of the screen and pressing select. There’s also a spinning wheel interface for quickly running up and down menus more swiftly. 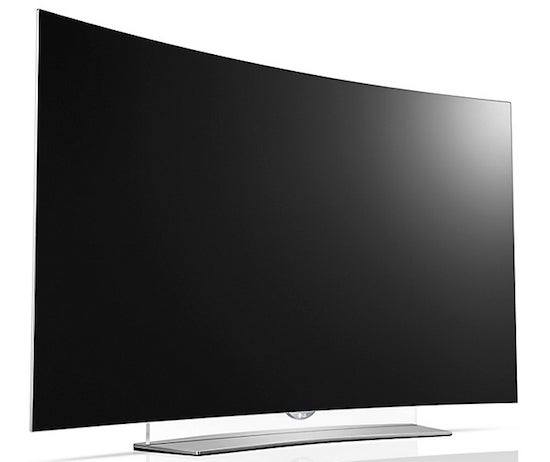 While the point and cllick interface approach works well for the large icons that make up most of the webOS 2.0 interface, it can feel a bit finicky to get the pointer in exactly the right place when you’re trying to select something relatively small.

Gaming on the 55EG960V is great fun in some ways as the screen’s impeccable contrast works a treat with the often quite stark and dynamic images used by many video games. Input lag, though, is slightly below average at around 50ms, meaning that the TV could cost you a few lives or points in reaction-based games such as Call of Duty and Guitar Hero.

One last point worth covering is image retention. The potential for OLED technology to suffer with this problem, where bright, static image elements (like certain channel logos) leave ghostly traces of themselves behind long after they’re supposed to have disappeared, is well documented. And it’s noticeable that LG has a screen saver system in play on the 55EG960V that you don’t get with the brand’s LCD TVs. However, we didn’t notice any retention issue on our test model, despite leaving a Sky News logo in one place for a good few hours. So while you should always treat this issue with care, it isn’t looking like as severe a problem as we’d feared.

As with the 65EC970V, this is a much trickier question to answer now than it would have been had the 55EG960V come out last year. Why? Because as noted earlier, 2015 has also brought us Samsung’s SUHD TVs, with their HDR-friendly high brightness and wide colour gamut capabilities.

Having experienced native HDR content on the Samsung SUHD TVs we have no doubt that HDR and UHD make perfect bedfellows, and in doing so feel likely to become the standard visuals of tomorrow.

It’s great news that the 55EG960V will one day be able to handle HDR sources after a firmware update, but only time will tell if OLED’s reduced brightness but enhanced black level response will be able to do HDR full justice. Plus it’s a shame that it doesn’t currently appear as if HDR playback from UHD Blu-ray will be supported when Samsung assures us that its SUHD LCD TVs WILL be able to play back HDR from UHD Blu-rays.

Still, with its ground-breaking black levels and unprecedented design glories, the 55EG960V’s OLED screen also feels like the TV of the future even if its HDR talents end up being limited.

The 55EG960V’s picture strengths may appeal to you more than the SUHD approach if you’re a die-hard plasma TV fan, and even if its HDR talents turn out to be compromised versus those of the Samsung SUHD TVs, the 55EG960V is arguably better positioned to make the most of today’s picture standards despite its slight flaws.

Although it isn’t quite the slice of TV perfection AV unrealists may have been hoping for, the 55EG960V still sets the bar where black level response and design are concerned, and in doing so continues to make a hugely persuasive case for OLED’s place in the AV landscape of tomorrow.