LG’s panel looks great, has good features, and has the colour accuracy, uniformity and contrast to be able to handle mainstream work and gaming. Its image quality isn’t quite good enough for colour-sensitive and demanding workloads, though, and bigger, faster widescreens are available for similar prices.

The LG 38WN95C-W is an impressive, expensive widescreen that is ostensibly aimed at professionals.

However, a deeper dive reveals that it’s an excellent option for gaming too. It’s a 21:9 monitor with a 144Hz refresh rate, DisplayHDR 600 and Thunderbolt 3, but you’ll have to pay £1349 to get your hands on this much tech.

That 38in diagonal is large, and the 21:9 aspect ratio means that this display dominates a desk. The 3840 x 1600 resolution provides lots of on-screen real estate, which is handy if you work in media applications with horizontal timelines, or with multiple windows simultaneously. The 1800R curve is conventional, and it makes the display more immersive in work and games. 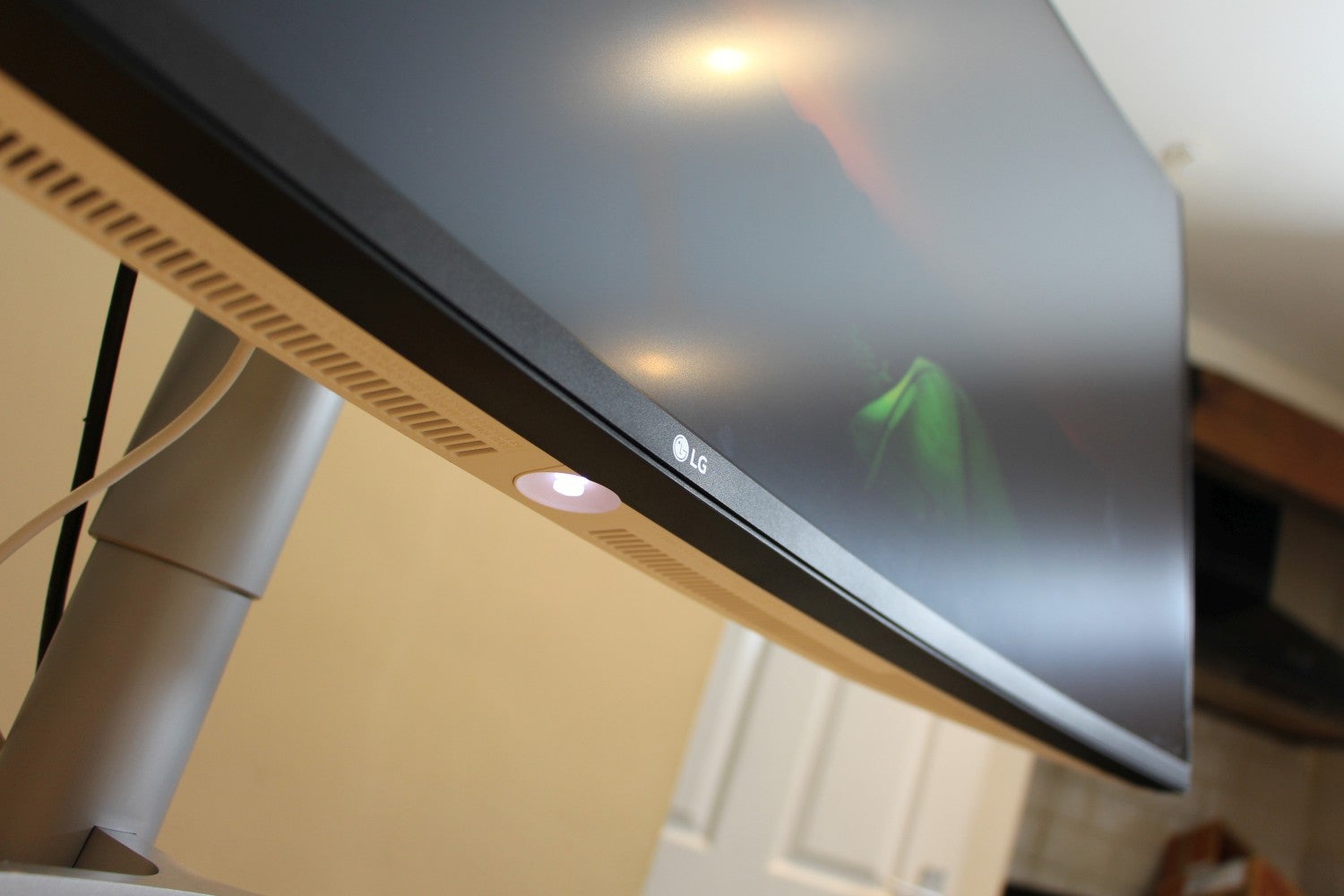 Positively, the LG provides twice the horizontal space of a 1080p display and more vertical pixels than most widescreens, which top out at 1440p. At this price, though, it’s also possible to get 49in, 32:9 monitors with 5120 x 1440 resolutions. Depending on your workflow, that might be more useful.

LG pairs the wide resolution with solid features. It’s a 10-bit IPS display with claimed 100% sRGB and 98% DCI-P3 coverage. The LG has AMD FreeSync Premium Pro and Nvidia G-Sync compatibility at a peak refresh rate of 144Hz, which means butter-smooth gaming on AMD and Nvidia graphics cards alongside smooth animation and Windows usage – alongside a superb 1ms response time. That’s impressive, but 240Hz widescreens are also available at this price, and they’re better for games. 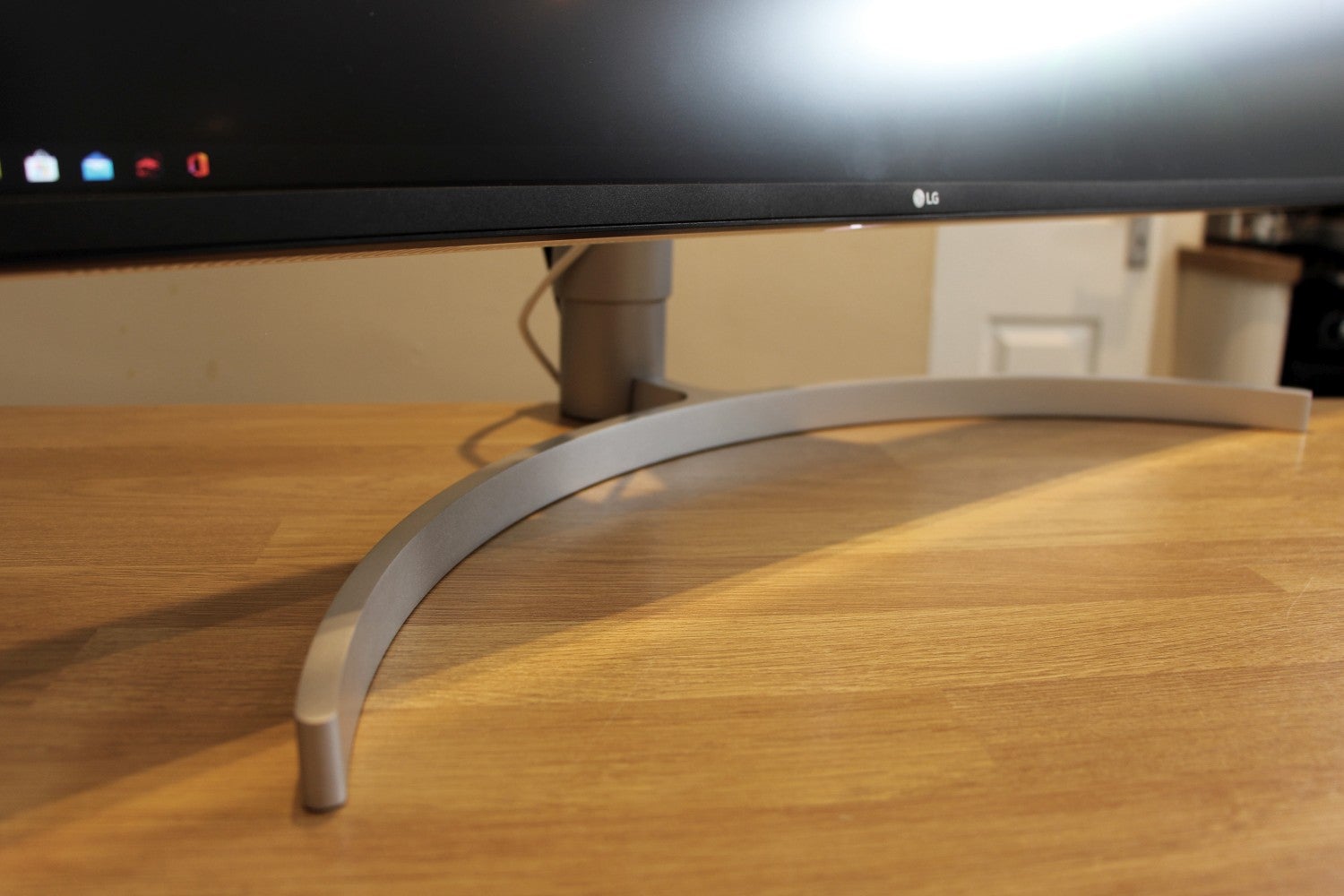 The LG only uses DisplayHDR 600 without local dimming, which isn’t a high-end HDR implementation so HDR content will have a modest boost, but that’s it. And, as ever, some other panels offer DisplayHDR 1000 at no extra cost.

At the rear, the LG has two HDMI ports and a DisplayPort connection alongside two USB 3 ports. The LG has Thunderbolt 3, which supports data transfer, display input and 94W charging capability so the whole display can be run with one cable from a laptop. Handily, the ports face outwards, and elsewhere there are solid PBP options and an on-screen display that’s large, fast and well-designed, with sensible shortcuts and the usual options if you delve deeper. 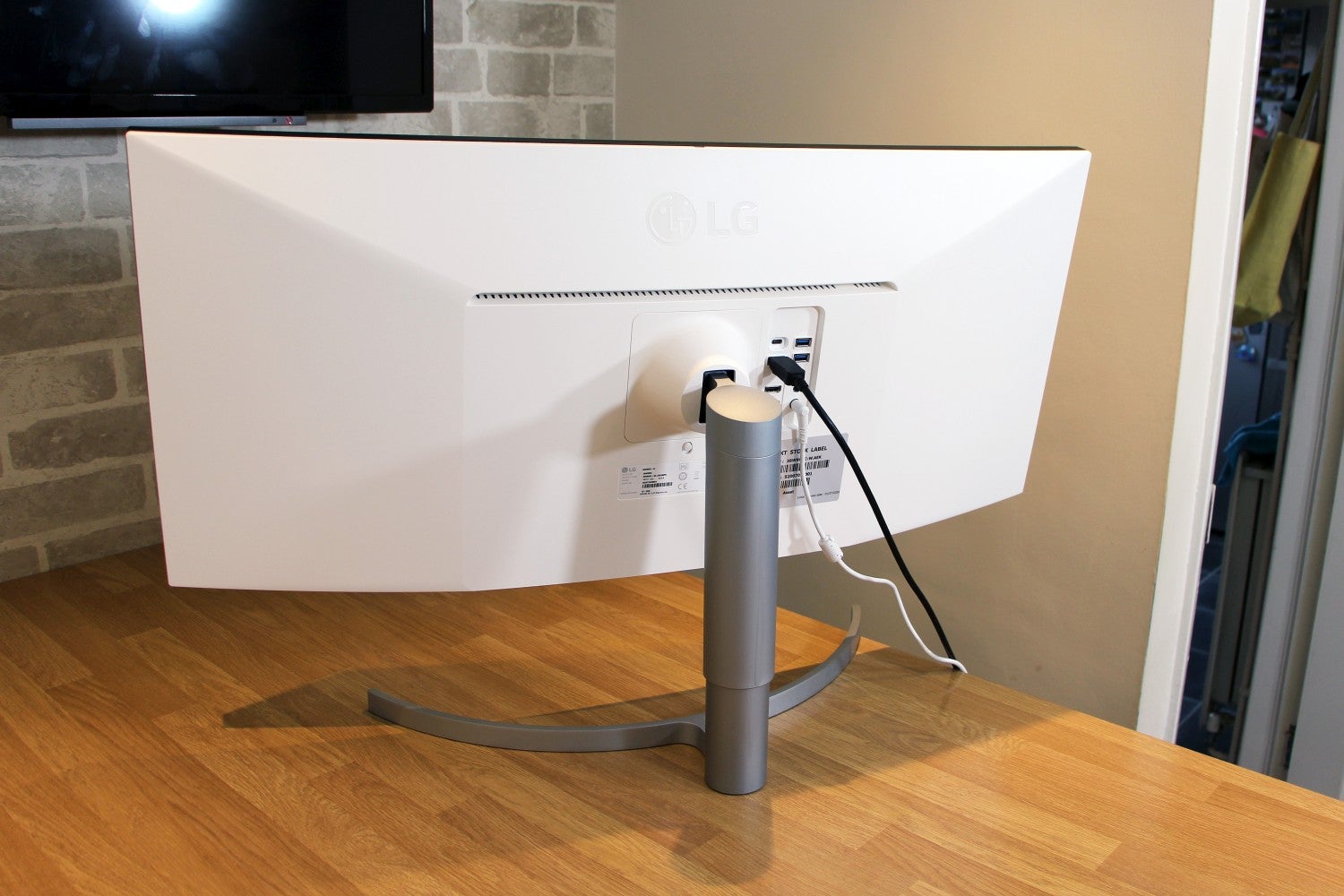 The LG’s base is an attractive curve of metal, the stand is a cylinder in the same shade, and the display has slim bezels – it looks fantastic. It’s got height adjustment, left-to-right swivelling, and it’s compatible with 100mm VESA mounts.

There aren’t many downsides. The pair of 5W speakers aren’t good; they’re loud, but they have too much bass. Build quality is only middling too, as the screen wobbles too much. 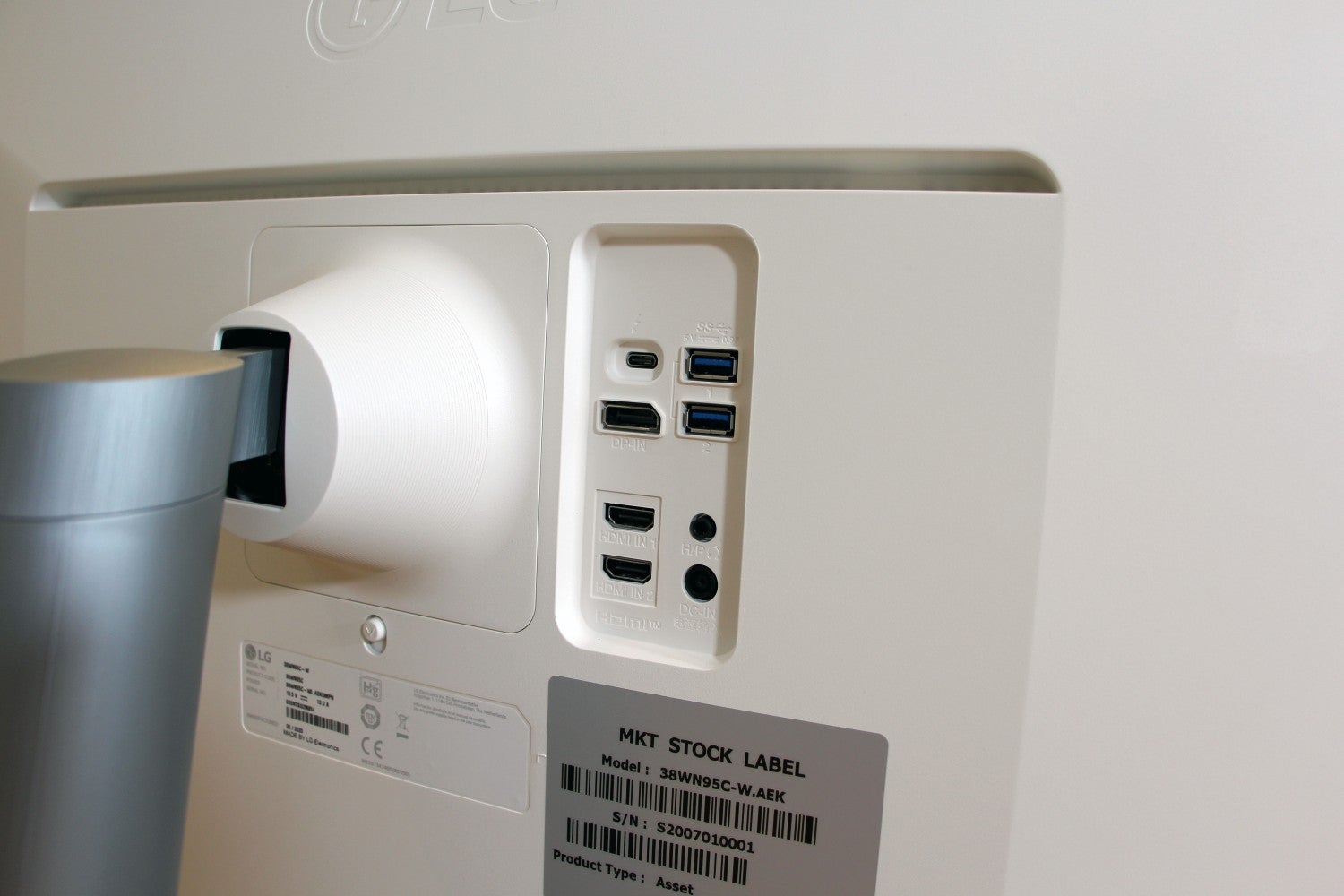 By default, the LG delivered a hefty brightness measurement of 437 nits and a black level of 0.44 nits. Those figures create a contrast ratio of 993:1. That’s reasonable, but that black level is too high which means darker shades lack a little depth, despite good vibrancy elsewhere. It’s not a ruinous issue though, and the LG’s 99.9% and 93.8% coverage in the sRGB and DCI-P3 colour gamuts mean this panel can be used for work and play in both colour spaces.

The Delta E of 2.12 is good enough for mainstream work and gaming, the colour temperature of 6540K is stellar, and the gamma measurement of 2.18 is excellent. The LG also has good uniformity; in the top-left corner the brightness dipped by 15%, but the deviation was sub-10% in every other sector. 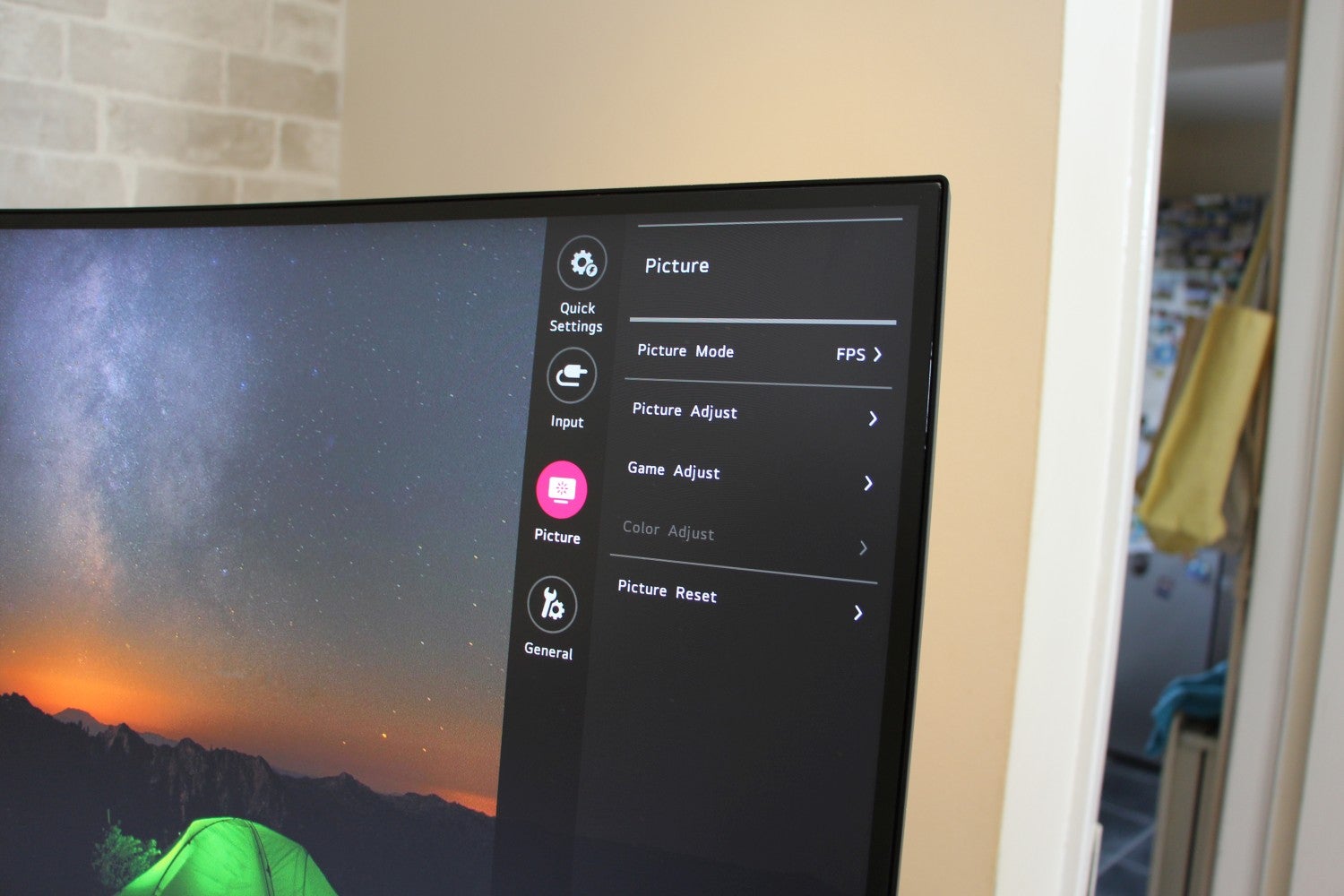 Those colour figures aren’t quite good enough for the most demanding, colour-based professional situations – designers and graphic artists will want to look elsewhere. The only other notable issue is the 83.9% Adobe RGB coverage, which isn’t good enough for professional use.

For mainstream work and gaming the LG has enough ability in the sRGB and DCI gamuts, alongside its sheer size. It looks the part, has good connectivity, and has solid adjustment options, and good gaming features.

If it’s going to suit your workflow, though, the LG is impressive – versatile, well-specified and with good quality.