There will come a point in your first competitive Lethal League Blaze match where you’ll think the ball can’t possibly go any faster. It’s usually when somebody swings so hard that an echoing boom shakes the ground, the entire arena turns red and the ball streaks away, a blur.

And then, somehow, another player will perfectly time their own strike, catching the streak of white mid-flight. The boom grows louder, colours meld into a psychedelic haze and that streak of white, now impossibly quick, slams into the side of your character’s head, bouncing them off-screen. So yes, Lethal League Blaze can always go faster.

Part fighting game, part future sport, Lethal League Blaze is pure brilliance. You and up to three opponents swat a ball around an enclosed arena, and every time you hit it, it gains speed. Only the last player to hit the ball is immune to damage if it touches them. So as long as someone else is in control, you’re in danger of getting KO-d.

It’s the sequel to 2014’s Lethal League, which introduced this bizarre fusion of baseball and Street Fighter. The formula is the same here, but the small changes – the new 2.5D visuals, the funky soundtrack and some mechanical twists – make matches even more frantic and enjoyable. It’s just a shame that Blaze’s peripheries don’t match up to the core action: the tutorial is half-baked, the computer AI is too easy, and single-player modes feel like an afterthought.

If you’re a newcomer, you’ll get the hang of it in minutes. It has no complex button combos to remember: you just get near the ball and swing away, changing the angle of your strike by jumping or aiming with the left stick. You can also bunt – which kills the speed of the ball temporarily, popping it up in the air to make it easier to hit – or grab it mid-air to fling it forward.

The joy of playing Lethal League is in mastering the timing of these simple actions. When you hit a fast-moving ball, your character freezes for a moment, and a bar at the bottom of the screen tells you when the ball will start moving again. The trick is to judge when – and where – your opponent will hit it, and swing a millisecond early to ensure you make contact.

Nailing a ball that’s pinging wildly around the screen and watching the game react with flashing lights and special effects is a fantastic feeling, and with each hit the tension grows.

You can grab three friends that have never played before and have a good time in a free-for-all match, but it’s deceptively tough to master: you could play 50 hours and still get mashed by online opponents.

Each of the 13 characters, three of whom are new, have a special ability, and you’ll have to learn when to use them. For example, the smiley Candyman can phase the ball through the arena’s walls so it goes off one side of your screen and comes back on the other.

You can also steal the ball right off your opponent’s bat/skateboard/giant fist (the cast are a varied bunch) by swinging in the same spot as them just as they release the ball. They, on the other hand, can counter that steal by parrying, which creates a forcefield around the ball, stunning anyone trying to touch it.

Mix all of this together, throw in some mind games, double jumps and dodges, and you have plenty to learn if you want to climb the online leaderboards. The community are already discussing advanced moves and producing guides on how to improve.

If you were good at the original, you’ll still be good at this, but it’s not mechanically identical. Blaze makes three major additions: two that I love, and one that I’m not so sure of.

The addition of a health bar is a masterstroke. In the original, you’d get knocked out if the ball touched you no matter how fast it was travelling. Here, if it’s moving slowly, it’ll just take a slice off your health bar, so you’re more likely to get up to high speeds. And don’t worry, if you smash the ball, your opponent still goes down in one shot.

It also adds power-ups: periodically a floating goal will appear at the top of the screen that will gobble up the ball and spit it out in a different form. The ball might turn invisible or transform into an American football that bounces unpredictably – it all serves to ramp up the chaos.

The final major change, which I’m not convinced of, is a new ‘grab’ button. At any time, you can grab the ball and chuck it at your opponent, which might disrupt their timing. It’s also a hard counter for parries. If your opponent parries, then grabbing will immediately interrupt. It feels too easy to pull off and therefore makes parries less useful, which is a shame because they’re vital to stopping consecutive players smacking the ball in one spot.

But it’s a small issue, and I’m sure high-level players will find a way to make it work, perhaps by parrying at the last possible minute. And besides, when you’re playing with friends on a night in, nobody’s going to worry about it in any detail: you’ll just think it’s funny that you’re able to pick up the ball and chuck it at someone’s face. 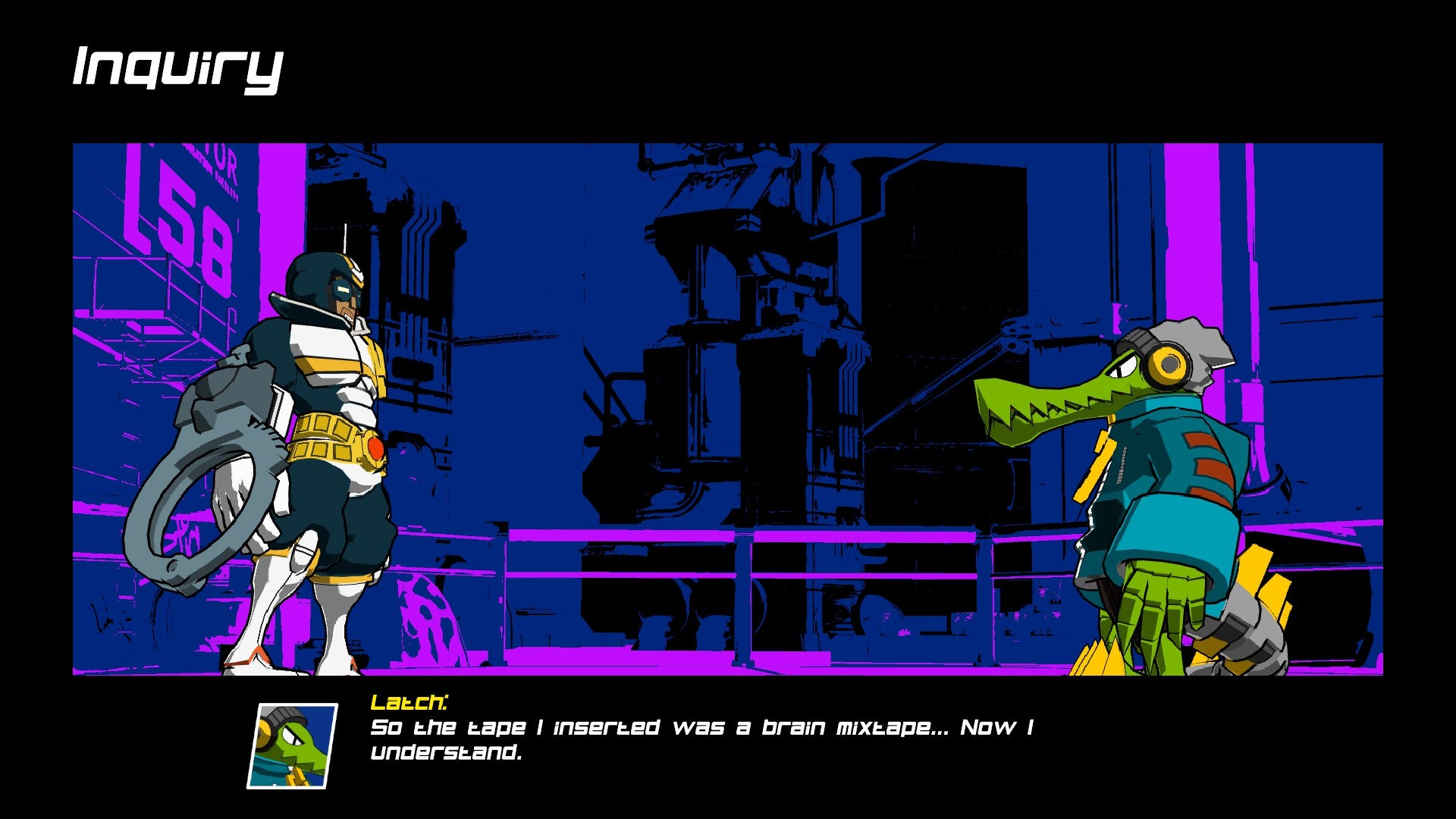 Blaze looks a lot better than the original, too. It’s now 2.5D, which means more texture on character models and more going on in the background of levels. I like how arenas change as the pace builds. Once you reach a certain speed threshold in one of them, police cars with blaring sirens will pull up in the background. In another, the lift you’re in is plummeting towards the ground, floors of a building flying past in the background.

The cinematic shots that frame finishing moves in offline modes are a highlight. When someone is knocked out by a fastball, it’ll freeze the frame, rotate it and turn the background to a solid red that brings out any special effects that were going on at the time. It’s screenshot heaven, and I found myself posing every time I knocked out an opponent to get the perfect shot.

Changes that are specific to single-player are, sadly, less successful. A new story mode feels rushed and pointless, and its tale about a Lethal League squad in a city that has banned the sport is hard to follow. This isn’t a game you’re buying for the narrative – but this mode doesn’t even serve as an introduction to the mechanics because it’s so damn easy. Even if this is your first time with Lethal League, you’ll breeze through every story match unscathed, which gets boring fast. 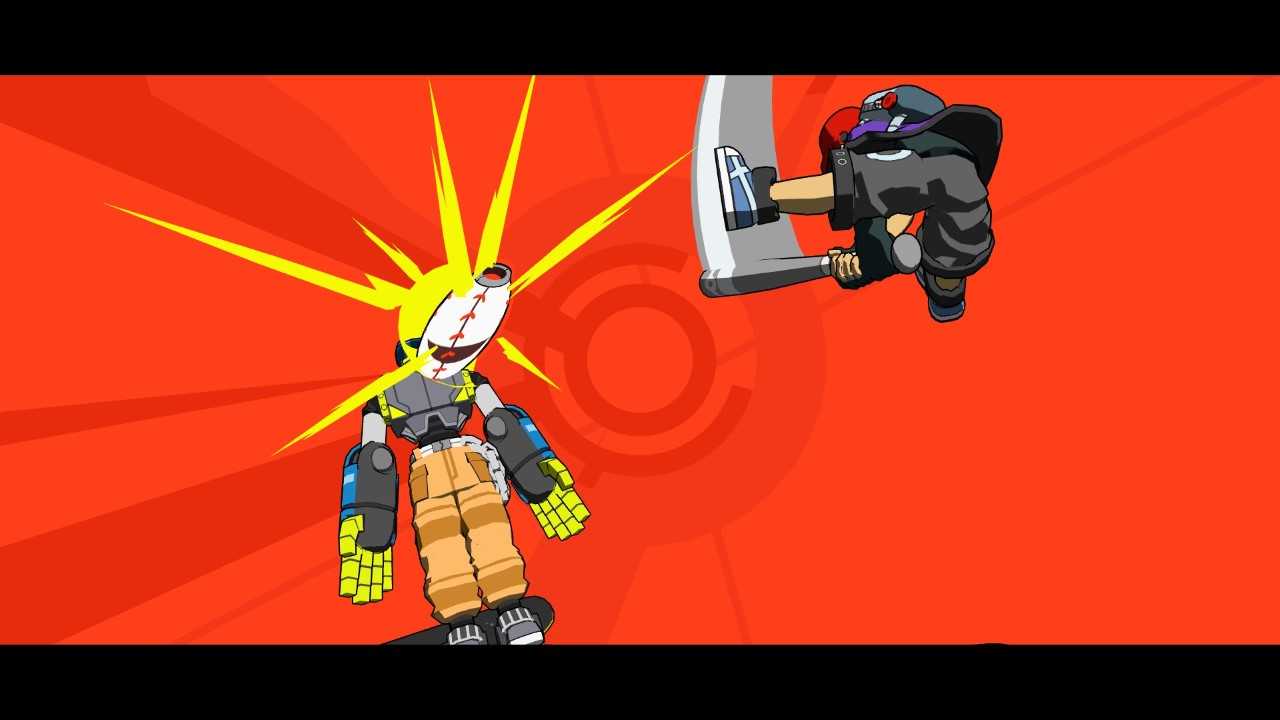 The game operates a one and done system: if the ball hits you, you lose a point

The single-player Versus mode has similar difficulty problems and does nothing to prepare you for playing online matches, even casual ones. The CPU seems incapable of either hitting or dodging the ball, and never mixes up its play.

Not even the practice mode is up to scratch: aside from two very brief tutorials, it just consists of you, a ball and an empty arena. That’s it. There are no hints as to how each character’s special move works, or – more importantly – how their movements differ, leaving you to do your own research online.

Thankfully, you can create custom games and tweak the skill level of the computer, creating tough matches. That’s probably the best way to prepare for online, although it makes you wonder what the point of the other modes is.

While it’s a shame that Blaze’s single-player stutters, it doesn’t take away from how endlessly fun each and every multiplayer match is. It’s one of the best party games you can own, with controls that anyone coming round for a game night can get the hang of quickly.

With friends, either locally or online, you can play duels, four-player free for alls, 2v2 team games, or a volleyball-themed minigame. And when they all leave, you can hone your skills online, mastering parries and climbing the leaderboards in 1v1 ranked matches.

Whether you already own Lethal League or not, you should buy this sequel as fast as you can.