The Lenovo Yoga Slim 7 is a fantastic value laptop, seeing a leading performance and battery life despite costing a few hundred quid less than the competition. The only things holding it back from a perfect score are a bland design and a few minor omissions.

The Lenovo Yoga Slim 7 is a baffling laptop, not because it features any left-field gimmicks, but because it’s so outstandingly cheap for what you get.

It doesn’t look as snazzy as the Dell XPS 13 and lacks the incredible power of a MacBook Air, but if you’re looking for value, this may well be one of the best laptops you can buy.

It’s worth noting that AMD sent me the Lenovo IdeaPad Slim 7, which is essentially the US variant (which is no longer available) of the Yoga Slim 7. Both laptops are identical enough for me to feel comfortable reviewing them as one product, with the only minor differences including slight variations to the specs and a subtle design tweak on the lid.

The Lenovo Yoga Slim 7 (AMD) has an official starting price of £849.99 from the official Lenovo website, but it’s also available from third-party retailers such as Amazon for as little as £699. We suggest shopping around for the ideal configuration, as there’s plenty of options with very affordable prices.

Intel versions of the laptop are also available with a starting price of £749.99/$769.99. I can’t comment on the performance of these models, as I’ve only tested the AMD version.

Design – The Lenovo Yoga Slim 7 is bland but reliable

The Lenovo Yoga Slim 7 looks like a very generic laptop. It’s an all-metal design with minimalist styling. The UK variant at least has the ‘Yoga’ brand printed on the lid to add more character than the blank US model I have before me, but I still think it looks a little bit too basic.

Lenovo is offering two colour options: Slate Grey and Orchid. The latter looks far more interesting, although it won’t be for everyone – I wish there was a blue or red model to broaden the appeal. 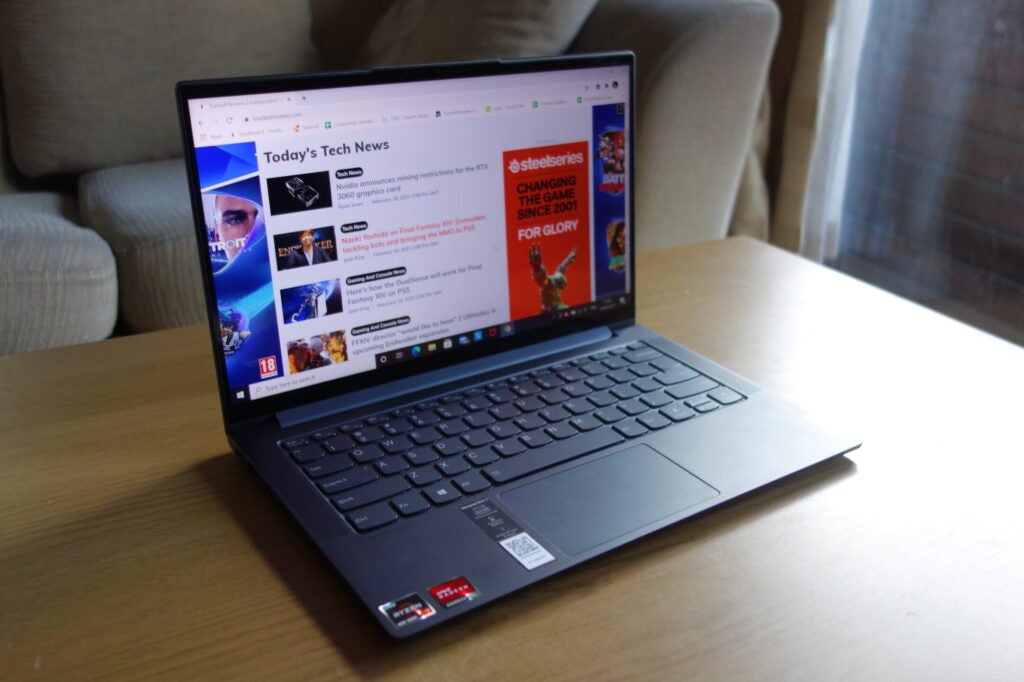 The bezel is super skinny to fit in with modern trends, with Lenovo still finding space to fit a webcam at the top. While the Yoga doesn’t look quite as jaw dropping as the likes of the Dell XPS 13 or Razer Book 13, it’s still a suave laptop that most owners will be proud to own.

The Lenovo Yoga Slim 7 is just 14.9mm thick and weighs a reasonable 1.4kg. It’s not quite as lightweight as the likes of the Acer Swift 5, but I still found it effortless to carry it with one hand and squeeze inside a bag.

Despite its slender frame, Lenovo has managed to fit in an impressive array of ports, including USB-C, USB-A, HDMI, headphone jack and even a SD card reader. This is one of the best offerings I’ve seen, especially in a time where the likes of Apple and Dell are forcing you to connect everything up via USB-C. 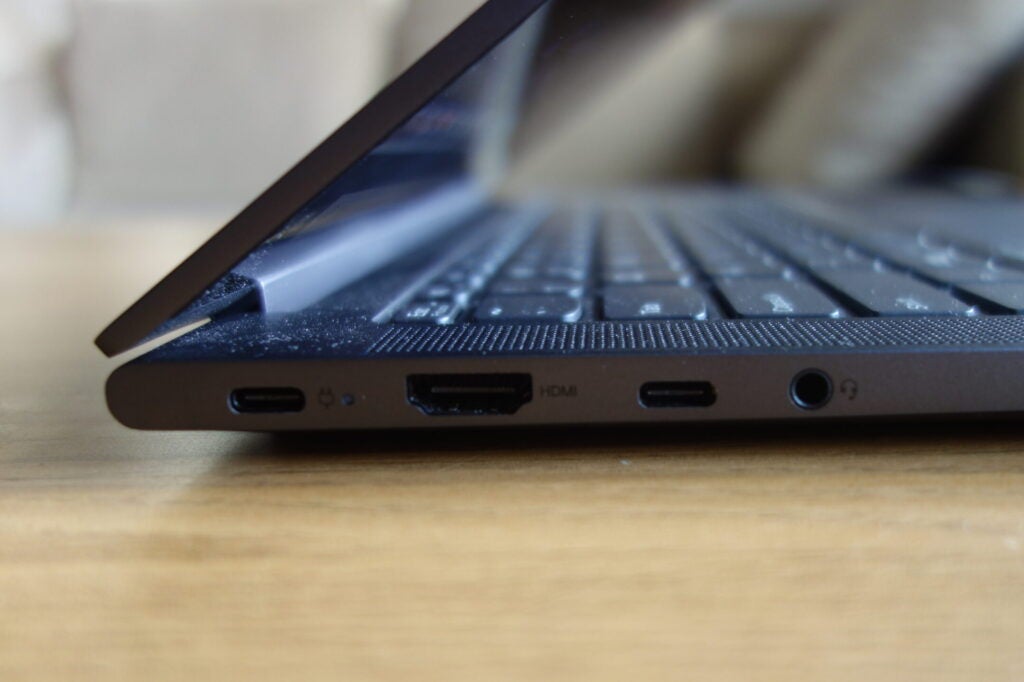 The AMD model on review here unfortunately doesn’t support Thunderbolt 3, limiting the data transfer speeds when using the port. It’s one of the biggest features you’re missing out on by not spending more, but that’s forgivable considering the price.

The backlit keys are chunky and rounded, making it easier for touch typing. There’s enough travel here to ensure a comfortable typing experience for prolonged periods too. There’s no number pad, but that’s no surprise with a 14-inch ultrabook. 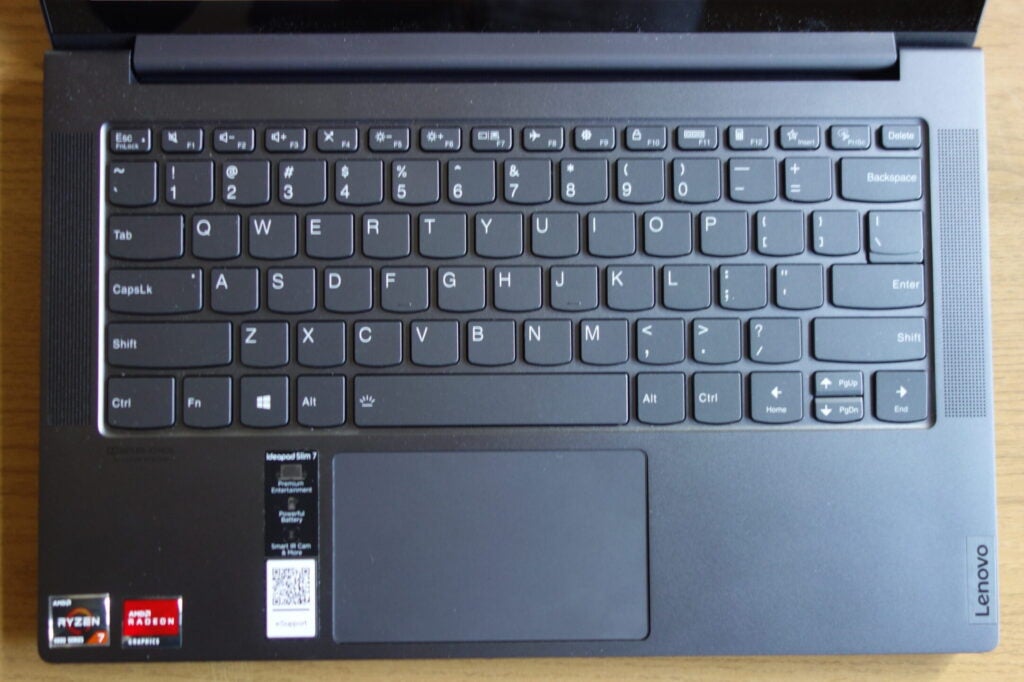 A fingerprint scanner is embedded into the power button on the side and is easy enough for me to reach. This feature isn’t included with every model however, but the IR Camera at least allows for facial recognition as backup.

The glass trackpad is also very comfortable to use and never caused me any issues with my many weeks of use.

When laptops undercut the £1000 mark, the screen quality typically starts going south rapidly. That’s not the case with the Lenovo Yoga Slim 7. Its 14-inch 1080p screen is as good as you could hope for from a modern laptop aimed at basic day-to-day tasks.

My colorimeter recorded a 1784:1 contrast ratio for Lenovo’s laptop, which is better than the vast majority of ultrabooks. Couple that with the respectable 345-nit brightness, and you’ve got a laptop that can display bright and punchy colours. 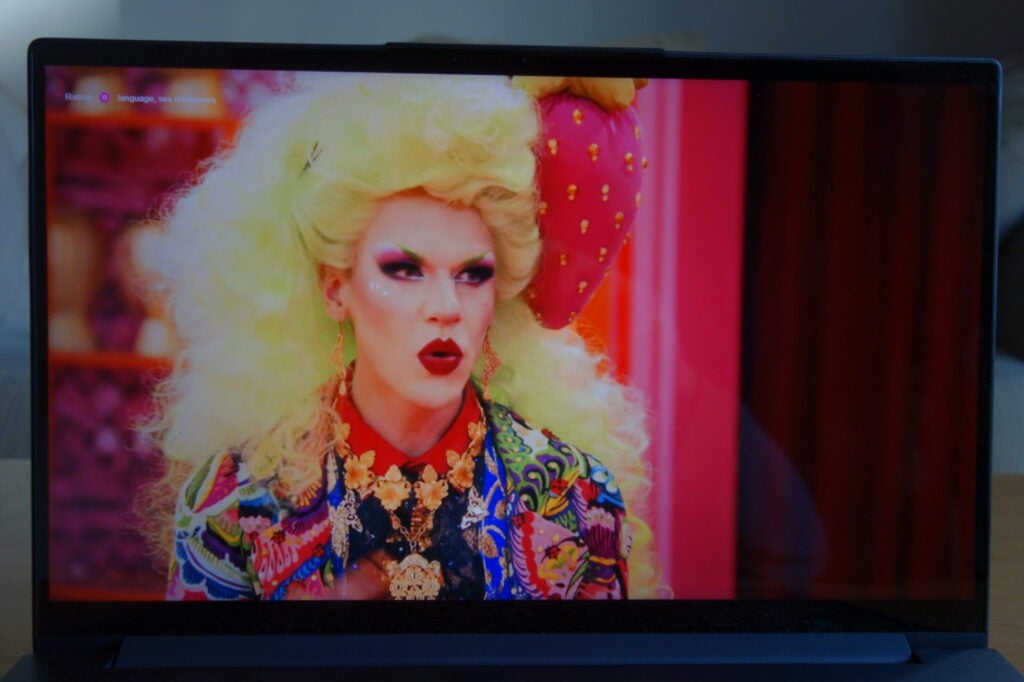 It proved to be a great companion for Netflix, especially at this affordable price point. Black colours were also really dark and inky, providing great detail in shadowy scenes, which will be a boon for Daredevil and Ozark fans.

Colours are presented accurately with an sRGB colour coverage of 97.7%. It’s not quite accurate enough for professional-grade work however, but that’s hardly a surprise at this price.

The Yoga Slim 7 screen has a 16:9 aspect ratio which is actually becoming rather old fashioned these days, with many modern ultrabooks switching over to the squarer 16:10 format, which is better at accommodating websites and social media. The 16:9 screen is still perfectly fine though, and proves to be a better choice for video.

Performance – An ultrabook with oodles of power

The Lenovo Yoga Slim 7 model in my possession is packing a Ryzen 7 4800U processor. Unfortunately, you can seemingly only purchase the Ryzen 7 4700U configuration in the UK right now, which is slightly less powerful.

However, the performance difference should be minor, and my benchmark results should still provide a decent idea of the performance levels you can expect from this laptop. The results I collected from various benchmark tests were incredibly impressive, surpassing most of the best ultrabooks I’ve tested so far, including the Dell XPS 13 and Razer Book 13.

The high PCMark 10 result emphasised that the  Lenovo Yoga Slim 7 can maintain a high performance level for extended periods of time too, making this an excellent device for office work or university coursework. It blasts through simple tasks such as web browsing, video streaming and social media snooping too.

What’s more, the 3DMark Time Spy proved that the integrated Radeon GPU is powerful enough for entry-level content creation and gaming, so you’re able to dabble with the likes of the Premiere Pro and Steam – although don’t go expecting it to run the likes of CyberPunk 2077.

Storage looks to be limited to a 512GB capacity, but that’s more than enough for most people. The SSD is lightning quick too, with read and write scores of 3448MB/s 2182MB/s respectively. This means it’s one of the fastest ultrabooks available for loading and saving data on the physical drive, whether that’s opening an app or transferring a video file to the laptop.

The performance boost provided by the Ryzen 4000 processor is impressive, but it’s the improvements to the battery life that’s the real star here.

After reducing the brightness to 150 nits and using PCMark 10’s battery benchmark to simulate office work on a laptop, the Lenovo Yoga Slim 7 lasted an incredible 14 hours 39 mins before zonking out.

Such stamina means this laptop is not far from being able to survive two consecutive working days without needing to be plugged into the mains. Previously, most ultrabooks I’ve reviewed have struggled to surpass the 10-hour mark, so such a feat really has to be applauded. 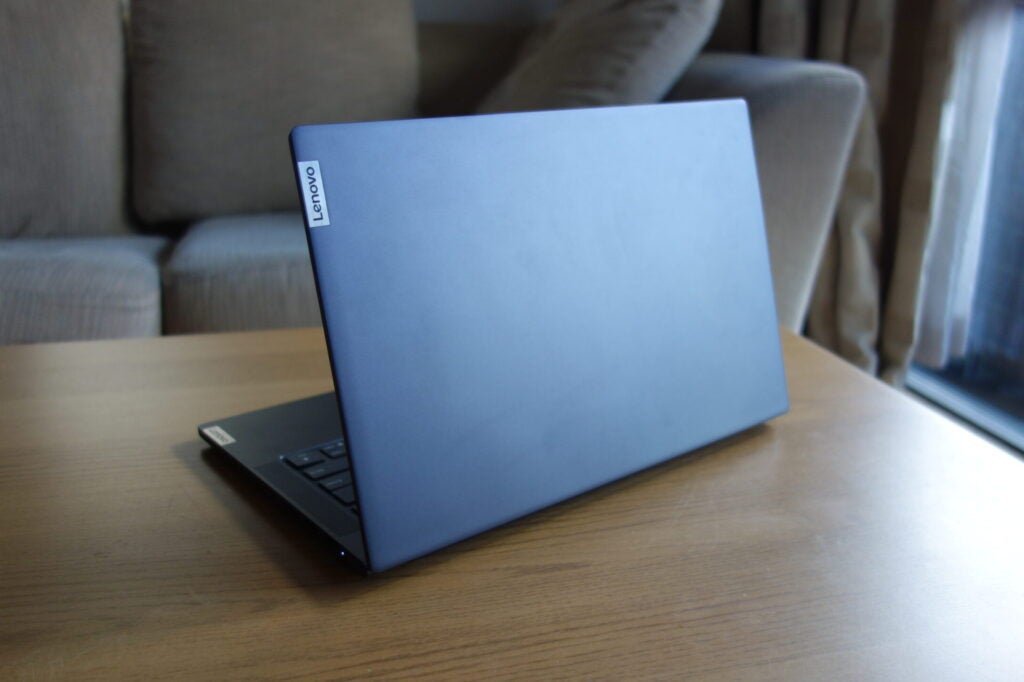 You should buy the Lenovo Yoga Slim 7 if…

You shouldn’t buy the Lenovo Yoga Slim 7 if…