The Lenovo Yoga 9i is sleek, stylish and sturdy, and comes with a great screen and speakers – but irritating design, mediocre Intel hardware and the underwhelming haptic touchpad all hinder this hybrid.

The Lenovo Yoga 9i is the firm’s latest flagship convertible, and it combines superb style with decent performance – and comes with some innovative features that you won’t find on other machines.

There’s plenty to like on paper, including a leather lid, haptic touchpad, a tempered-glass wrist-rest and a 4K display – but several of these features fall flat. The Yoga faces an uphill battle on the inside, too: while Intel’s internals aren’t bad, they’re regularly outpaced by other processors.

The £1699 / $1789 / €1799 model reviewed here is the priciest version of the Yoga 9i. It uses Lenovo’s Shadow Black leather lid and includes the glass wrist-rest and haptic touchpad. This machine has a Core i7 CPU, 16GB of memory and a 4K screen.

There are more affordable Yoga 9i models with a metallic finish that drop the glass wrist-rest and haptic touchpad. The entry-level model costs £999 / $879 / €1199, and comes with a Core i5 CPU and a 1080p display.

Lenovo’s machine squares up against the Asus ZenBook Flip S and the Samsung Galaxy Book Flex2. The Asus is more affordable, but the Samsung is pricier.

Design and keyboard – Great looks are undermined by inconsistencies

The Lenovo Yoga 9i has a sleek body made from black aluminium alloy with impressive build quality, and its movement is smooth and consistent. Undoubtedly, the leather lid adds class to this device, although there will be some who won’t like the idea for aesthetic or ethical reasons.

Lenovo’s machine looks and feels good, but in other areas, it’s ordinary. It weighs 1.4kg and is 16.5mm thick – which are acceptable figures, but both rivals are slimmer and lighter. 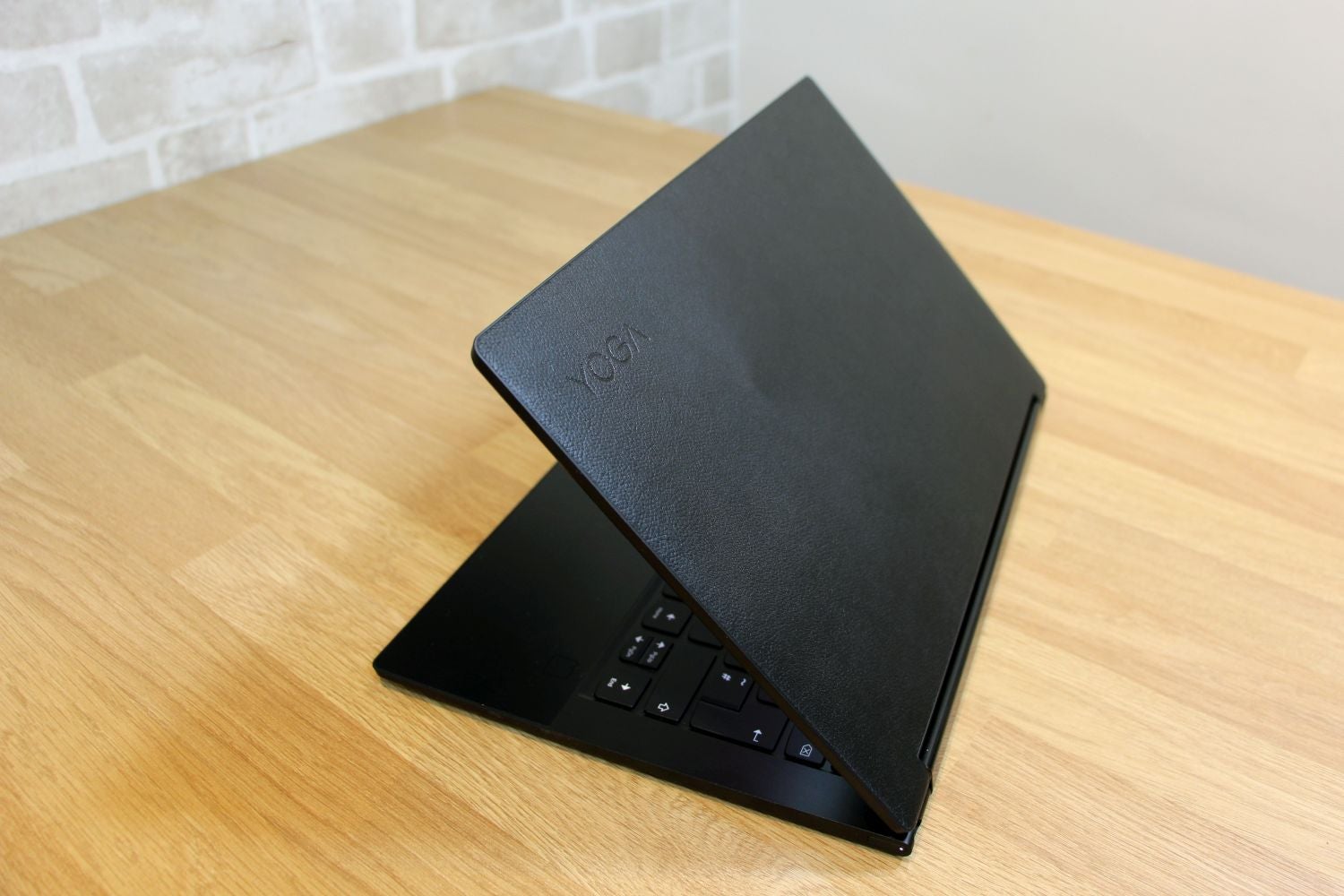 The left-hand side of the device is home to one USB-A port and two USB-C connectors that support Thunderbolt 4, DisplayPort and Power Delivery, with one of those required to charge the machine. There’s no card slot or HDMI output, though; both are present on the Galaxy Book Flex2.

Ergonomically, the Yoga is a mixed bag. Typing on this keyboard is fast and crisp, albeit with a slightly shallow action. The Yoga 9i comes with a fingerprint reader, too, which is ultrasonic on the Shadow Black model and conventional on the normal machine.

But while the keyboard impresses, the trackpad suffers. On the Shadow Black machine, the wrist-rest and touchpad are made from tempered glass. It looks great, but that touchpad isn’t practical: the clicking action is slow and it isn’t as crisp as a decent conventional pad. The touchpad surround is a thin, slightly textured line rather than a physical border, and that can sometimes make it hard to distinguish from the rest of the wrist-rest.

The Flex2 has a similarly shallow keyboard, but the ZenBook Flip S’s typing gear is more satisfying and comes with extra buttons. Both rivals offer better touchpads, and the non-leather Yoga will undoubtedly be better here too. 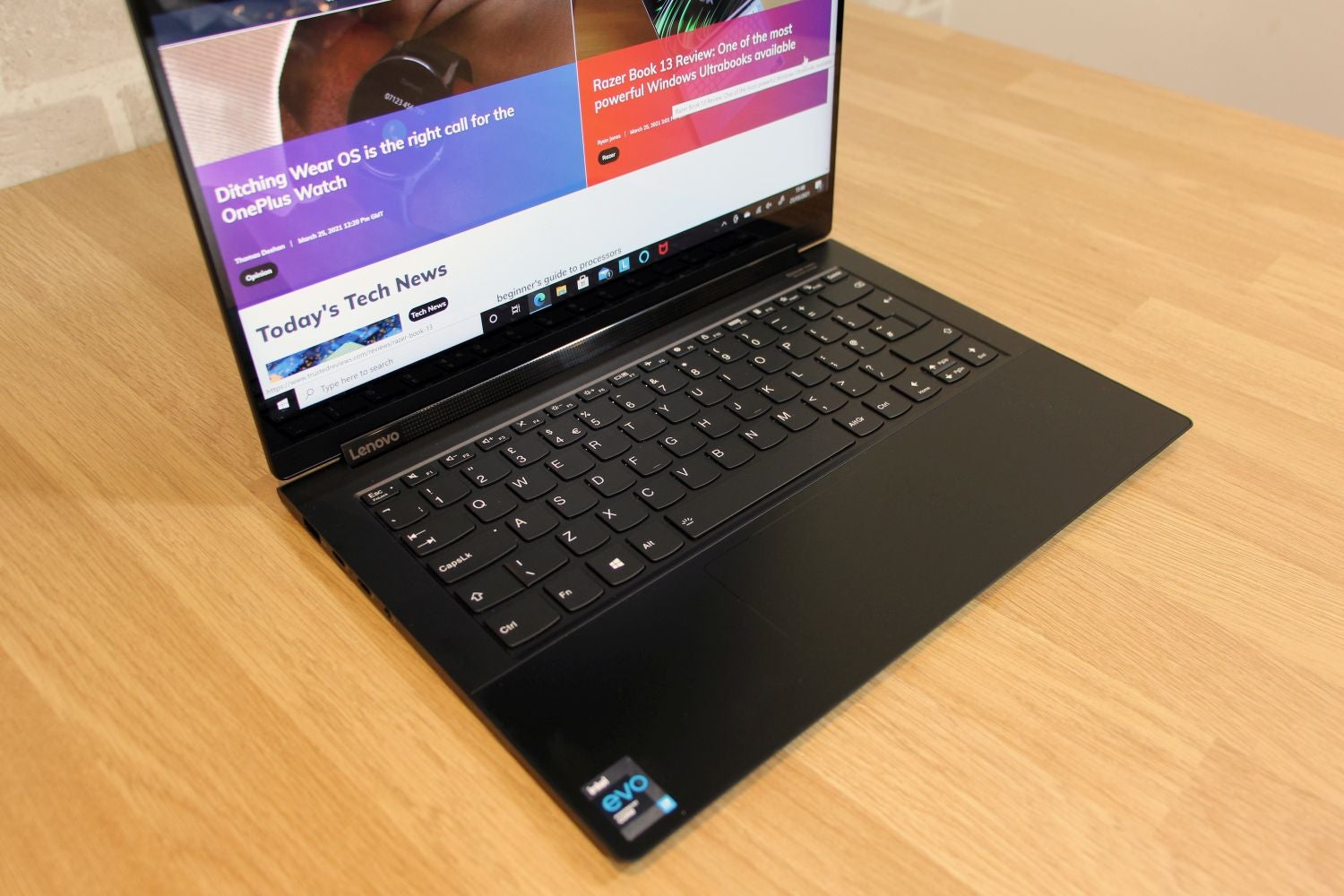 The inconsistency continues elsewhere. The webcam has a privacy shutter, but it’s awkward to use and the camera doesn’t support Windows Hello. The power button is smartly installed on the right-hand side, but it’s inlaid, so it’s difficult to find without looking. The bundled stylus works well and can be neatly stowed in the back of the machine, but it’s difficult to remove from its slot.

Lenovo makes a big deal about the Yoga’s speakers. The two subwoofers sit beneath the front edge, with the tweeters cleverly crammed into the hinge, so the sound points towards the user, no matter the laptop’s position. They work well, with ample detail and nuance and a pleasant thump of bass alongside enough volume to easily fill a room.

Screen – A good 4K panel for media and mainstream workloads

The 4K resolution, IPS technology, and touch hardware mean the Yoga’s 14-inch screen is crisp and versatile, but I do wish it used a 16:10 aspect ratio rather than 16:9 – that would allow more vertical space for working.

Nevertheless, the Yoga’s panel is great for media viewing and for work tasks where you need brightness and vivacity rather than accuracy. The maximum brightness of 484 nits enables indoor and outdoor use, and the black point of 0.33 nits is deep enough to give media and photographs decent depth. The resulting contrast ratio of 1466:1 is good for an IPS display, and it ensures smooth gradients, good nuance and vibrant colours. 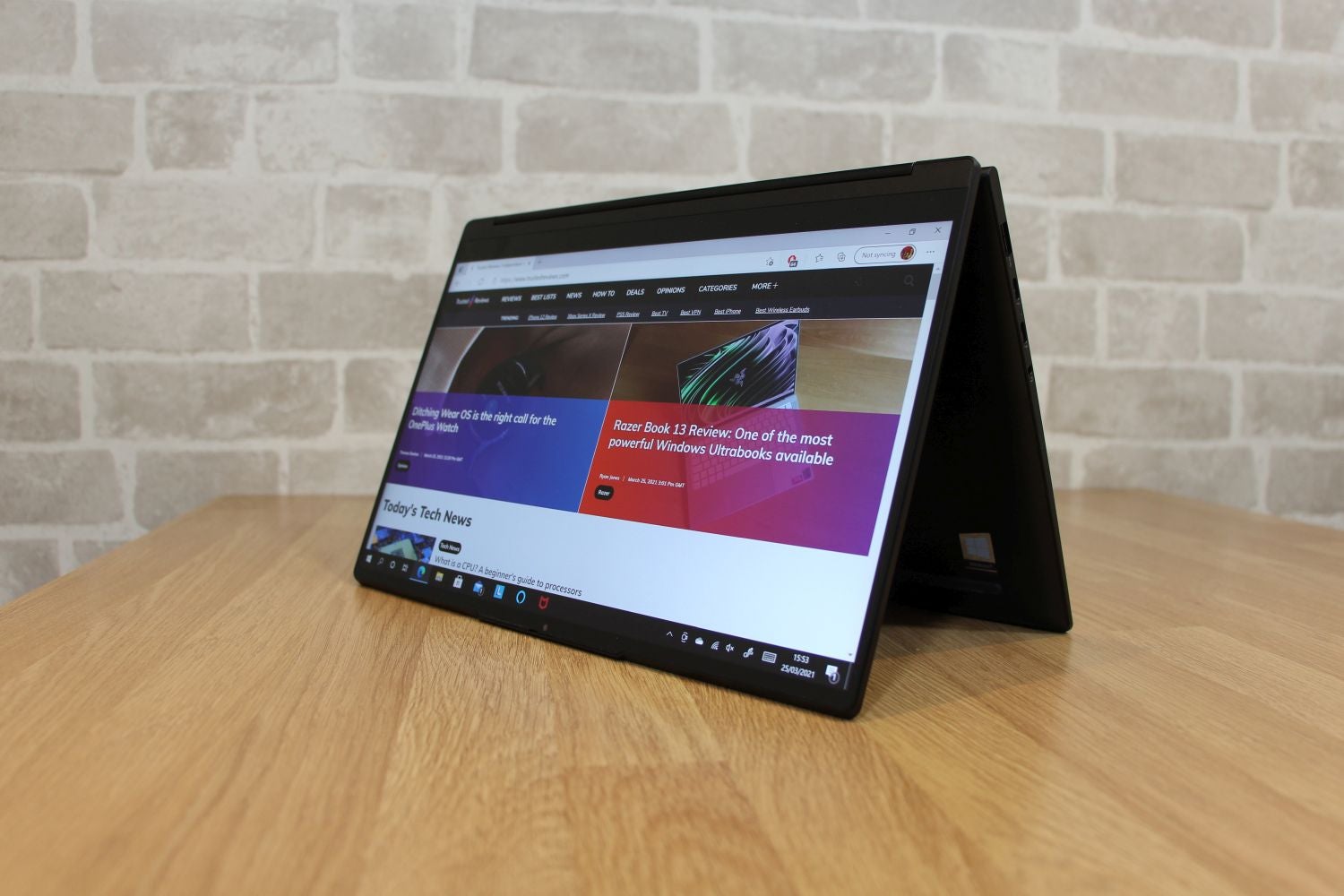 The average Delta E of 2.76 is good rather than great, though, and the Lenovo display rendered a solid 98% of the sRGB gamut. However, it only returned sub-85% figures in the DCI-P3 and Adobe RGB gamuts, so it can’t hack workloads in those more demanding colour spaces.

However, these results lift Lenovo’s panel beyond the Flex2 display. The ZenBook Flip S is undoubtedly better, though, thanks to an OLED 4K panel with better Adobe RGB and DCI-P3 gamut performance, brightness and black levels.

The featured Core i7-1185G7 is a quad-core CPU with a base frequency that tops out at 3GHz and a Turbo peak of 4.8GHz – alongside Iris Xe integrated graphics. The specification is rounded off by 16GB of LPDDR4 memory and a 512GB SSD, alongside dual-band Wi-Fi 6 and Bluetooth 5.0.

The Core i7 silicon will tackle any browser-based and Office app, and it will handle mainstream photo- and video-editing tasks. In PCMark 10 and Geekbench, the Yoga was a little quicker than the Samsung and Asus machines, both of which used the marginally slower Core i7-1165G7. Lenovo’s machine was slightly faster in 3DMark Time Spy, too.

In terms of gaming, the Iris Xe chip will play casual titles, and it will run some eSports and single-player games, if you’re willing to drop the quality levels and resolution.

The SSD’s decent read and write speeds of 3368MB/s and 2698MB/s keep the Yoga snappy, and it’s a good thermal performer, with hardly any external warmth and consistently quiet fans.

The Core i7 chip is reasonable, but if you’re willing to compromise on form factor and features, more power is available. Lenovo’s cheaper Yoga 6 isn’t as flashy as the Yoga 9i, but it’s available with an AMD Ryzen 7 4700U processor that’s more than 1000 points beyond Intel in the Geekbench multi-core test. That chip is also available in lots of conventional laptops. And then there’s the Apple MacBook Pro 13in, which uses the considerably faster Apple Silicon CPU.

Battery – Solid lifespan for every kind of task

The Lenovo’s battery life fell between its rivals’ figures. In the 150-nit video benchmark the Yoga lasted for 12hrs 27mins, which is a little better than the Asus but marginally behind the Samsung – but still, it’s easily enough to give you a full day of use if you’re not pushing the hardware too hard. 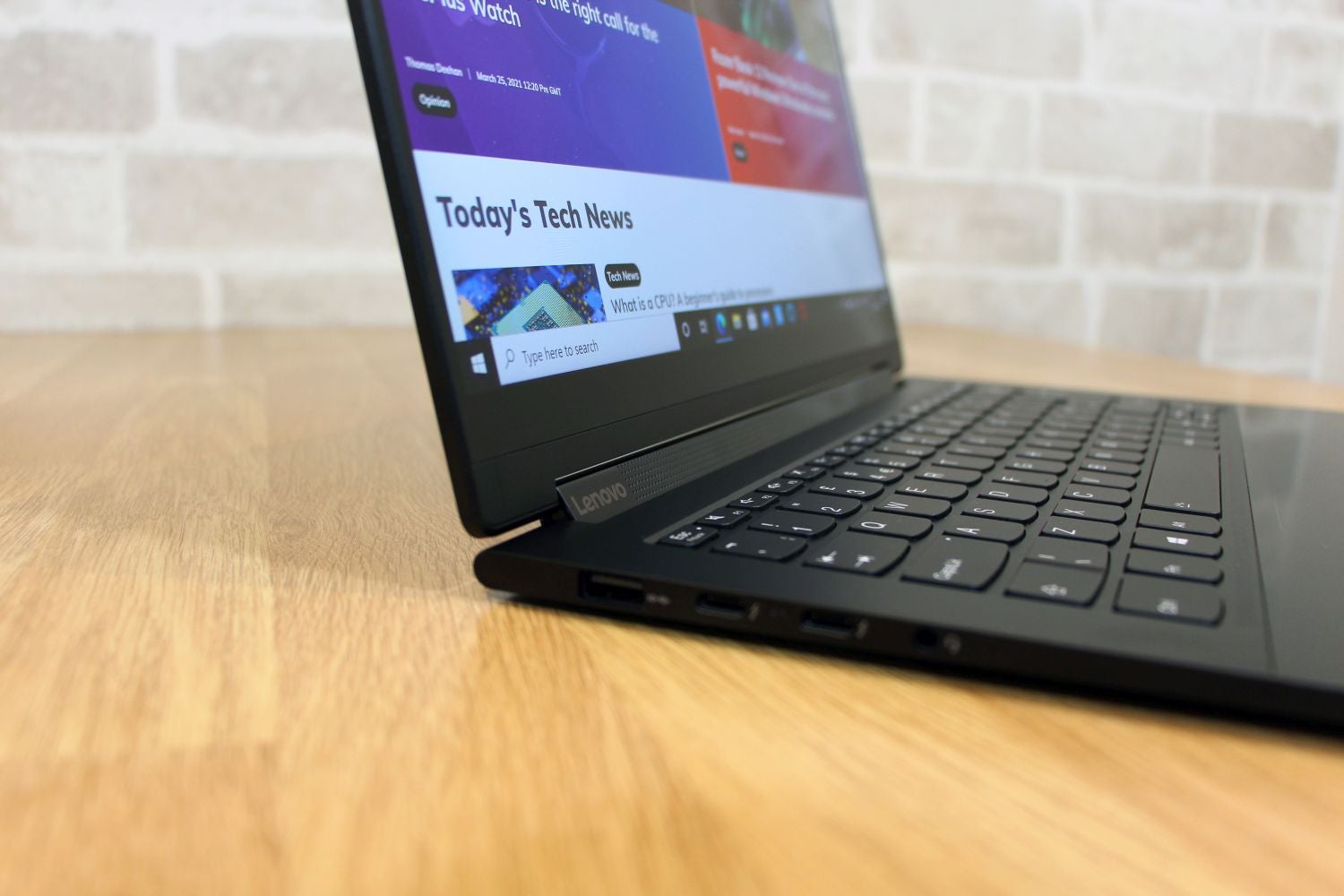 In a moderate work benchmark with the screen at half brightness the Yoga lasted for 9hrs 14mins, and that longevity declined by three hours with the display at full brightness. In a high-end work test with the components really pushed hard, it lasted for just under two hours.

These results are similar to the Asus, and they do generally bode well – unless you’re maxing everything out, you’ll get through your workday with this machine. Also bear in mind that you can add a couple of hours to these results by opting for the 1080p display rather than the 4K panel.

The Lenovo Yoga 9i looks great, and offers smooth movement and impressive build quality. The screen is a good-quality 4K panel, and the Yoga has top-notch speakers, solid battery life and an intuitive keyboard.

However, in too many areas this machine’s design is its downfall. The haptic touchpad is poor, Intel’s components are undermined by better silicon easily available elsewhere, and plenty of little design decisions are niggling irritations. It’s also heavier and thicker than rivals, and pricier than some of the competition.

This is a good hybrid, but the Lenovo Yoga 9i certainly isn’t the only option if you’re in the market for a convertible, and its faults mean that other machines are worthy of serious consideration.

You should buy the Lenovo Yoga 9i if…

You shouldn’t buy the Lenovo Yoga 9i if…