An exceptionally flexible hybrid laptop, but not without a few issues we find difficult to ignore at the price.

On paper, the Flex2 is the perfect stylish portable laptop. However, those who have to type long documents should probably steer clear since the keyboard is shallow. The sheer breadth of features push the price to a level that will be uncomfortably high for some. In addition, the fans start spinning at the slightest sign of pressure, and the flexi-hinge wobbles a little too much for ideal use outdoors.

Samsung sent me the high-end Intel Core i7 version of the Flex2, which costs £1849. A Core i5 version is available for £1649, which isn’t an insignificant sum for a mid-tier performance laptop. In other words, you had better like the sound of all those extras Samsung packs in.

The Samsung Galaxy Book Flex2 5G was announced in late 2020, and was available to pre-order from February 12 2021 in the UK and across Europe.

Currently, there’s no word on a USA launch date.

Design – Flexible, portable
and made of metal

Now that I’ve given the impression that the Samsung Galaxy Book Flex2 5G is a laptop with absolutely everything jammed into its case, I’m going to have to roll back. One of the aspects I appreciate most about this device is that Samsung hasn’t relentlessly chased every stat that looks good on paper.

The Flex2 weighs 1.3kg, which isn’t too far from the category average. And it doesn’t taper down to a fine point, so Samsung can say it’s barely thicker than a razor blade at its thinnest point. This is sensible laptop design, and it results in a mostly pleasing boxiness to the base, similar to the classic shape of the MacBook Pro. 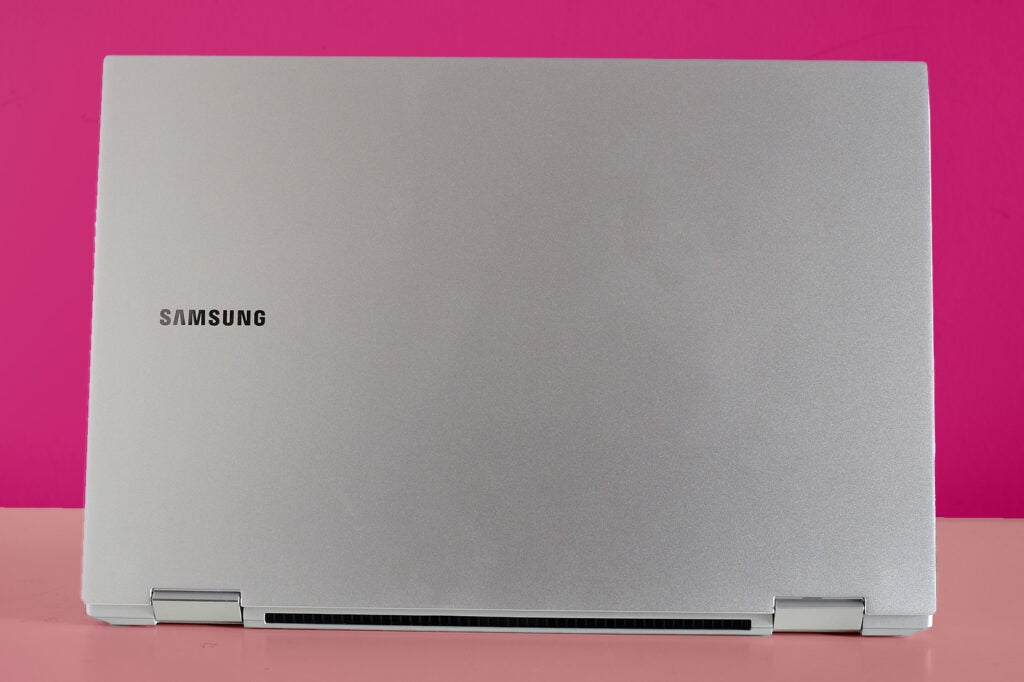 The lid and underside appear to be aluminium, but the keyboard surround has a less-metallic feel of a magnesium-aluminium alloy. The result is a laptop that has a cool-to-the-touch feel of metal when you pick it up, but that magnesium plate likely shaves a small but significant amount off its total weight.

There’s no obvious sacrifice to build quality, either. The keyboard is fairly rigid, and while its surround displays the almost plastic-like character of magnesium, it wasn’t noticeable until I took the time to analyse what Samsung had used here.

The Book Flex2 isn’t a bad-looking laptop. It has fairly severe square keys, but there’s no sign that the various panels are made up of different materials at a glance. Their finish is pretty uniform. 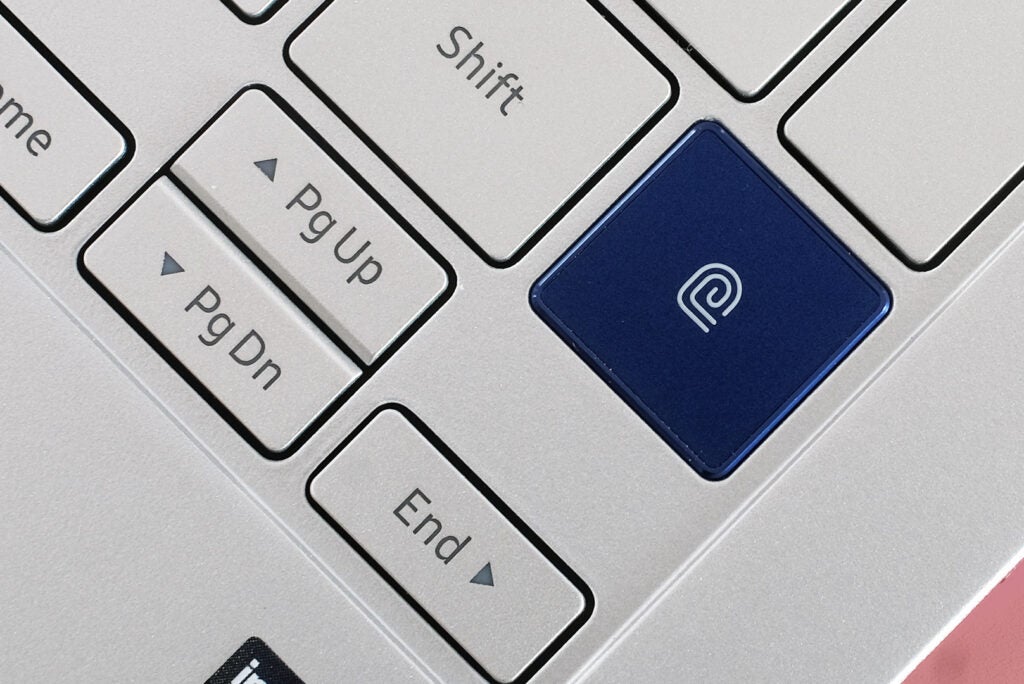 The fingerprint scanner is a blue square under the Enter key, and it works well. It recognised my finger every time. The other piece of keyboard furniture is a 12.6-megapixel webcam. Samsung’s idea is that it’s possible to use the Flex2 as you would a tablet, taking photos while flashing the keyboard at your subject.

I just wish there was a way to use this camera for video chat, because it’s radically better than the unremarkable 720p webcam that sits above the screen. We can’t really whinge at Samsung for this, though; the 12.6-megapixel camera would be too thick to fit in the display.

Are the black camera square and blue fingerprint scanner embedded into the surround graceful and pretty? No, they’re not. But this advertising of the tech is at least not audacious. Note that the Flex2 doesn’t have the slimmest screen borders around. 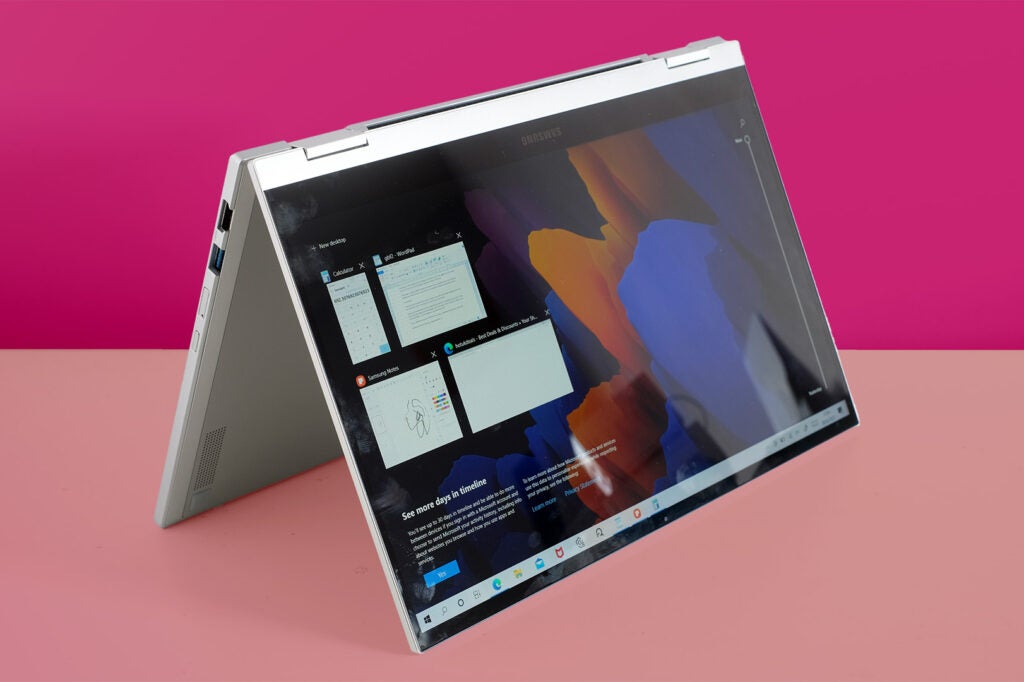 Samsung’s execution of the 360-degree hinge looks good, however. It doesn’t protrude significantly, and can hold the display at any angle – as long as you don’t start jolting the base.

Still, I spent some time working outdoors with the Flex2 and did find the screen wobbles somewhat when you work on your knees. And, as a result of the gloss finish of the display, you’ll see your face bounce around as you type – which is distracting. 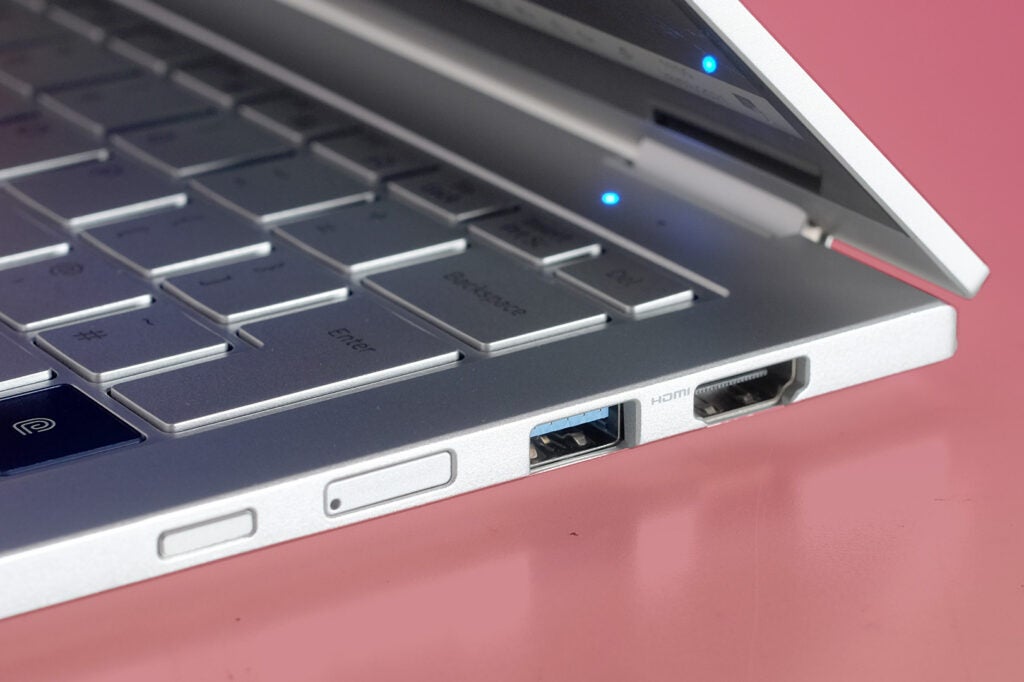 In terms of connections, the Book Flex2 includes one Thunderbolt 4.0 port, plus another USB-C port you’ll most likely use for the charger. There’s a full-size USB-A socket, a full-size HDMI, a 3.5mm headphone jack and microSD slot. The 5G SIM tray sits by the USB-A, and there’s also a dedicated sleep button on this side.

The Flex2’s speakers comprise stereo drivers tuned by AKG. In terms of performance, they’re reasonable but nothing special. There’s a hint of bass, avoiding the thin sound usually associated with laptop speakers. However, maximum volume isn’t all that impressive when compared to a MacBook Pro or the Lenovo Yoga 9i.

The keyboard here is shallow; it took several days for me to move from “I don’t like this at all” to “maybe I could live with this keyboard”. 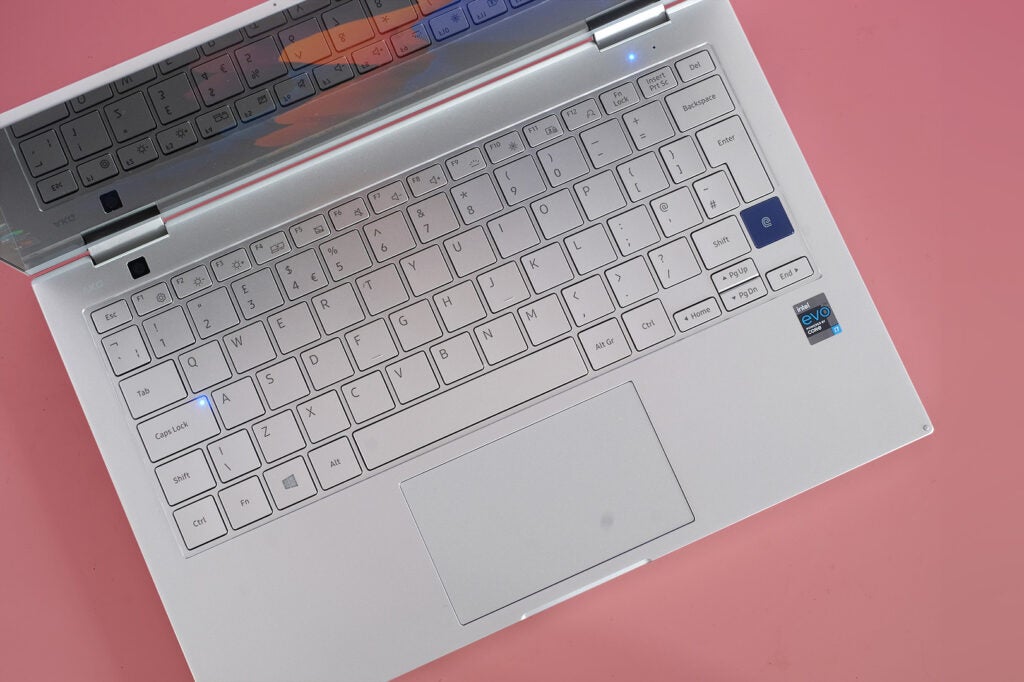 This is a solid implementation of a shallow keyboard, however. Short travel is offset by solid key resistance; the keyboard plate is fairly stiff and the keys have a three-level universal backlight. But it’s a shallow keyboard nonetheless, so if you spend much of you work day typing then I’d suggest you look elsewhere.

The Flex2 touchpad suffers no issues. Featuring a lovely textured glass surface, it isn’t floaty. The depress isn’t stodgy or laboured, and I didn’t notice any of the common driver issues that cause phantom clicks.

Laptops such as the Samsung Galaxy Book Flex2 5G give Samsung another outlet to show off its QLED display tech. This is a proprietary LCD design that Samsung puts into its mid-range and high-end TVs.

Despite this, my first impression of the Flex2’s display wasn’t the “wow” you might expect. Two aspects explain the reason for this. First, the Samsung Galaxy Book Flex2 5G has a 1080p screen, not the kind of ultra-high resolution you might get in a less feature-rich £1850 laptop.

Contrast, too, isn’t great. I used a SpyderX colorimeter to measure the Flex2’s at a bunch of brightness levels and found it offers around 1000-1060:1 in all cases. Plenty of non-QLED rivals reach around 1650:1, providing deeper blacks. 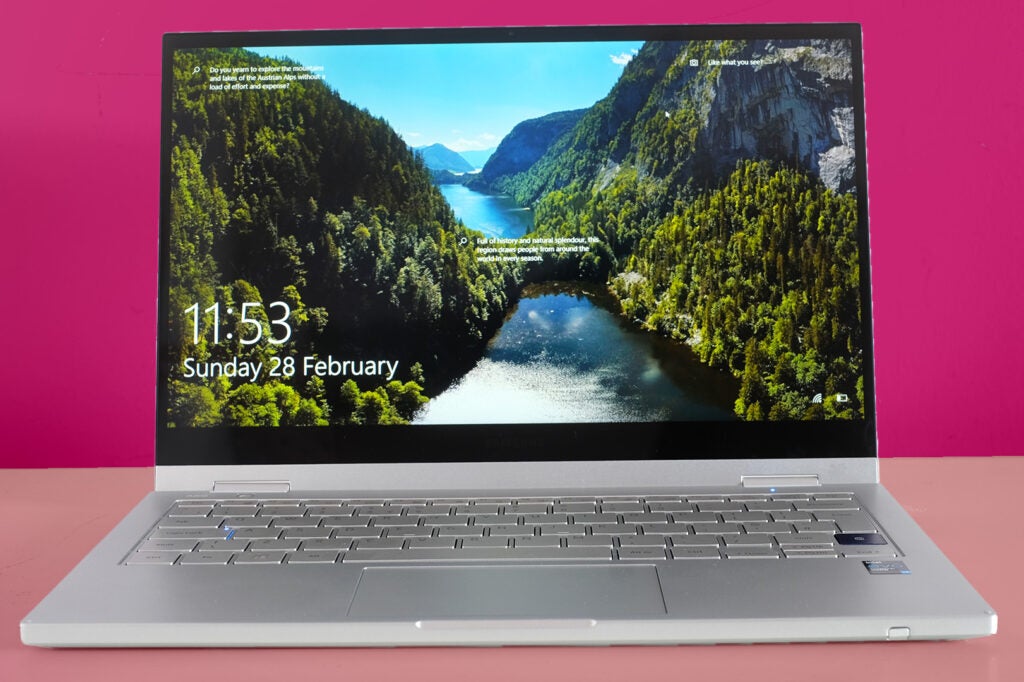 The main benefit of QLED is extremely deep colour coverage, ensuring on-screen colours are presented accurately. It hits 98% of DCI-P3 and 85.5% of Adobe RGB, which is superb for an LCD screen.

Peak brightness came in at an impressive 440 nits, making working outdoors viable. Samsung claims the screen can reach 600 nits, but I didn’t see anything close to this.

But do such laptops also come with a stylus? Plenty of laptops support digitiser pens; some even include one in the box. However, almost none is as practical as the Flex2’s S-Pen. It slots into a hole on the front edge of the base, securing into place with a satisfying click. 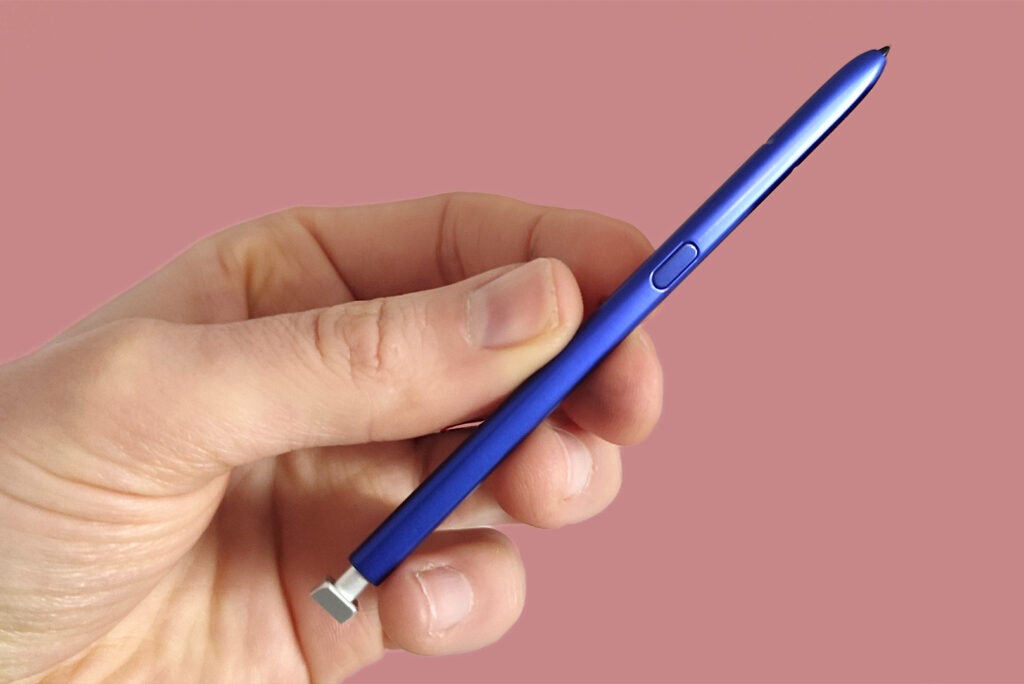 This is very similar to the S-Pen of a Galaxy Note phone, but the Flex2 allows for a slightly thicker barrel. Samsung has also tried to replicate the S-Pen software of its phones here.

Draw the pen out and a menu pops up, filled with shortcuts to Samsung’s preinstalled Notes and Pen UP drawing apps. You can add further shortcuts, should you want to use a proper design or art app. The S-Pen uses Wacom tech (like almost every competitor) to offer 4096 pressure levels, and its nib has a textured surface. This feels much better than hard plastic on the screen’s glass top layer.

Performance – Good in general, but the fans like to spin

The Samsung Galaxy Book Flex2 5G both is and isn’t a performance laptop. I think its 11th-Gen Core i7-1165G7 CPU and 8GB of RAM are the perfect fit for most people who would want this kind of stylish, slim and light laptop.

However, it doesn’t come with the higher voltage CPU of more powerful laptops. In addition, the amount of RAM and SSD storage supplied for the money is quite low.

My Flex2 came with 8GB of RAM and 512GB of storage. HP offers double the RAM (16GB) and double the storage (1TB) for £200 less, in the HP Spectre x360. That laptop doesn’t have 5G, a slot-in S-Pen or a secondary camera – but it’s a reminder that the Flex2 isn’t really made for those who tot up the raw performance they get for their money. Still, for my day-to-day use the Flex2 proved more than powerful enough.

The Flex2 also comes with the best thing to happen to Intel integrated graphics in years: the Intel Xe GPU. This provides similar gaming performance to an entry-level discrete graphics card.

It won’t trouble an Nvidia RTX 2060, or even an Nvidia GTX 1050, but it does make it possible for you to play games such as The Witcher III, Kingdom Come Deliverance and Subnautica at 1080p resolution at an approximate 30fps performance after playing around with the graphics settings.

The Flex2’s heat handling seem less refined than some of the rivals mentioned. While I haven’t noticed it becoming particularly hot, its fans appear to engage with the slightest provocation. Have a browser open and download a file? There’s a good chance the fans will spin. And – no surprise here – they have the noticeable higher-pitch whirr of a small diameter high rpm fan. This laptop doesn’t get alarmingly loud, but it’s frequently more low-level noisy than I’d like.

Battery – Bigger unit than some of the competition

So far, 2021 has been good for low-key gaming on laptops such as this; but it’s been even better for battery life. Where once claimed battery stats were works of fiction, the latest AMD Ryzen and 11th-Gen Intel chipsets allow for brilliant stamina.

Samsung doesn’t actually have any specific battery life figures on its product page, but we do know the Flex2 offers a very high capacity of 69.7Wh. The Dell XPS 13 2-in-1 is 51Wh, for a little context.

Set to stream 1080p video over Wi-Fi at 150-nit brightness, the Flex2 lasted 13hrs 40mins. This is a great result. Plus, 90 minutes of use outdoors saw the battery level drop by 13%. This suggests you can expect up to 11.5 hours use with the display maxed-out and little CPU load, which is impressive.

The charger is fairly portable-friendly, too. It doesn’t have a separate power brick, although its 65W power output takes a couple of hours to recharge the Samsung Galaxy Book Flex2 5G.

If you don’t care about 5G and aren’t fussed by the Samsung Galaxy Book Flex2 5G’s S-Pen, this laptop probably isn’t the best option for your money. The HP Spectre X360 gets you better core tech per pound, and if you don’t need a hybrid then the Lenovo Yoga 7 Slim is a great buy.

However, I get the sense Samsung had the Dell XPS 13 2-in-1 line in mind when designing the Galaxy Book Flex2 5G, and there are real benefits to the Samsung by comparison. It offers better battery life, more diverse connections, and a handy stylus implementation.

We’re a little way off the perfect Flex laptop, however, since Samsung could still make major improvements to the feel of the keyboard and in the reduction of hinge wobble.

You should buy the Galaxy Book Flex2 5G if…

You shouldn’t buy the Galaxy Book Flex2 5G if…