The Yoga 920 is Lenovo’s latest foldable laptop. At first glance, this flagship model doesn’t look hugely different to the older Yoga 910, with the new device featuring the same watchband hinge design and a near-identical external chassis. There’s still the option of Full HD or 4K resolution for the 13.3-inch touchscreen, too.

The big change is the upgrade to an Intel 8th Gen CPU, and all the performance and stamina benefits that brings.

The result is a 2-in-1 that’s desirable as well as powerful and versatile.

While some may find the lack of a design revamp disappointing, in my opinion the Yoga still ticks all the right boxes. And the slight changes that have been made aren’t without merit.

The watchband hinge is as useful as ever, allowing you to fold the laptop into a table-top ‘tent’ position – where the screen auto-rotates to match – or even fold the keyboard fully behind the screen for a tablet feel. Thankfully, it’s stiff enough not to move when it shouldn’t. I wasn’t so enamoured by the coppery-gold colour of the model I had in for review; the contrast with the silver hinge sections looked a little naff to me.

This isn’t a criticism I can make of the build quality, however, which is excellent. Both the Yoga 920’s chassis and the rear of its screen is crisply crafted from aluminium.

At 1.37kg, this device isn’t exactly featherlight, but neither is it cumbersome. It’s reassuringly solid.

The most notable change from the Yoga 910 is that the port options have been upgraded to include two USB-C Thunderbolt inputs – one of which is for charging – alongside the regular USB 3.0 on the device’s left side. Sadly, there’s still no memory card slot. 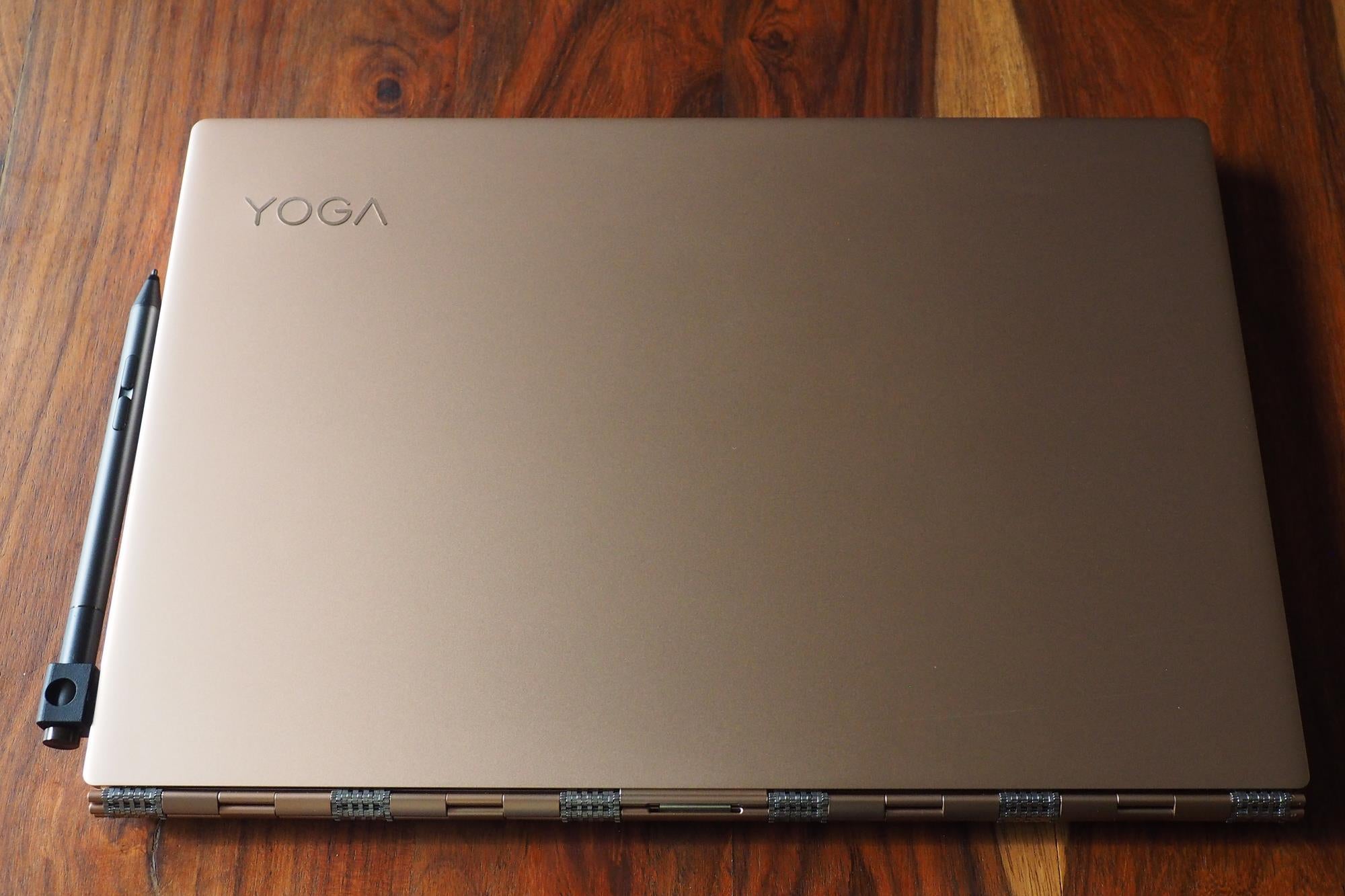 A much more subtle alteration is that the Lenovo logo no longer features on the lid, leaving just the ‘Yoga’ branding raised from the anodised aluminium surface. A small touch but it somehow ups the classiness, in my opinion. 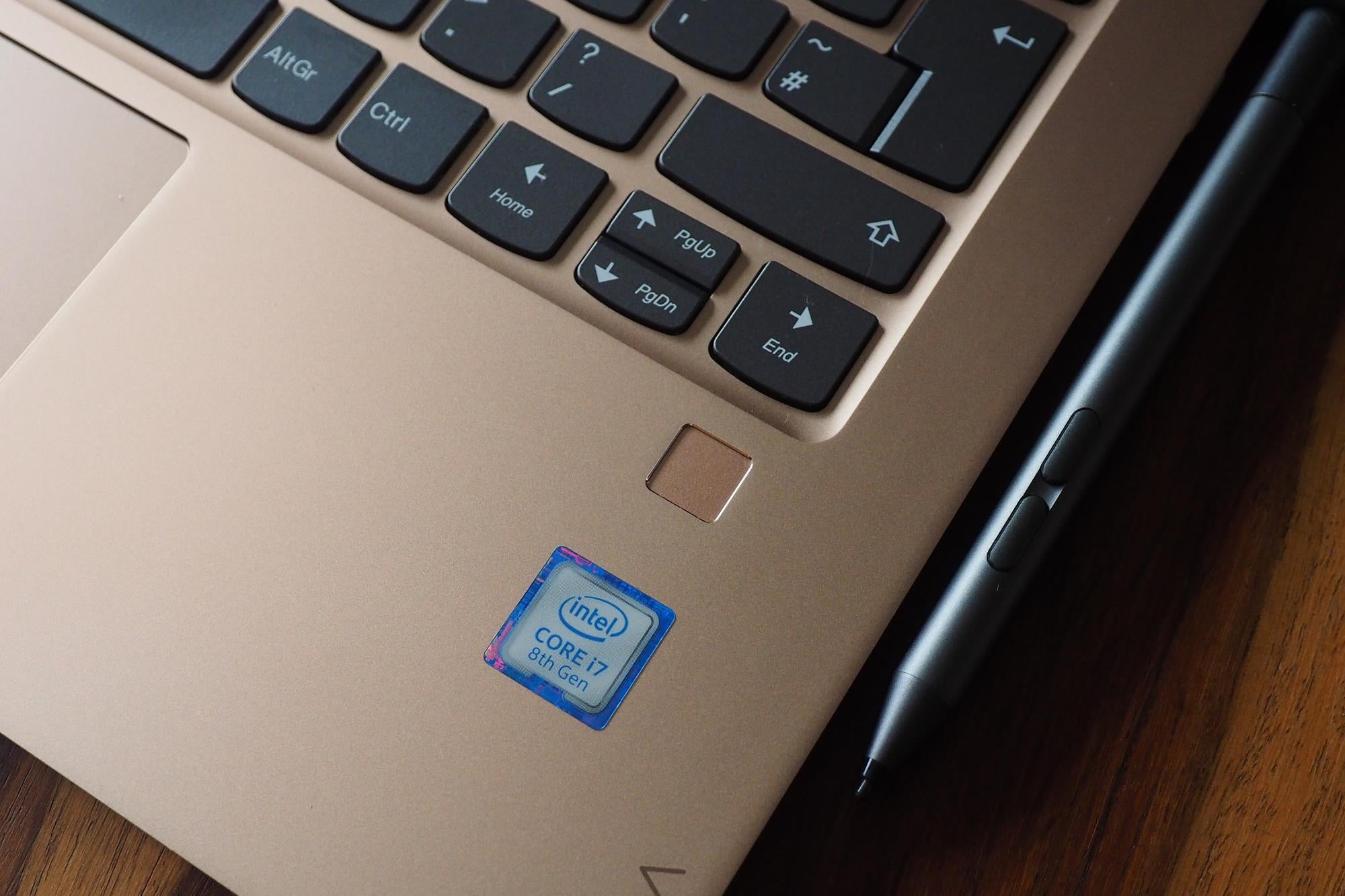 The package is rounded off with a fingerprint scanner that sits just below the direction keys, and a bundled stylus in the form of Lenovo’s Active Pen 2, which can detect 4096 pressure-sensitivity levels.

The Active Pen 2 can be fitted with a supplied adapter that enables you to attach it to the USB port when it isn’t in use. I wouldn’t recommend it, however – the metal body of the stylus regularly made contact with the side of the Yoga while it was in transit, resulting in quite a few scratches over the course of a few weeks.

It also blocks access to the power button, which is just plain stupid. I’d have preferred a magnetic solution to secure the stylus, similar to the solution on the Surface Pro. 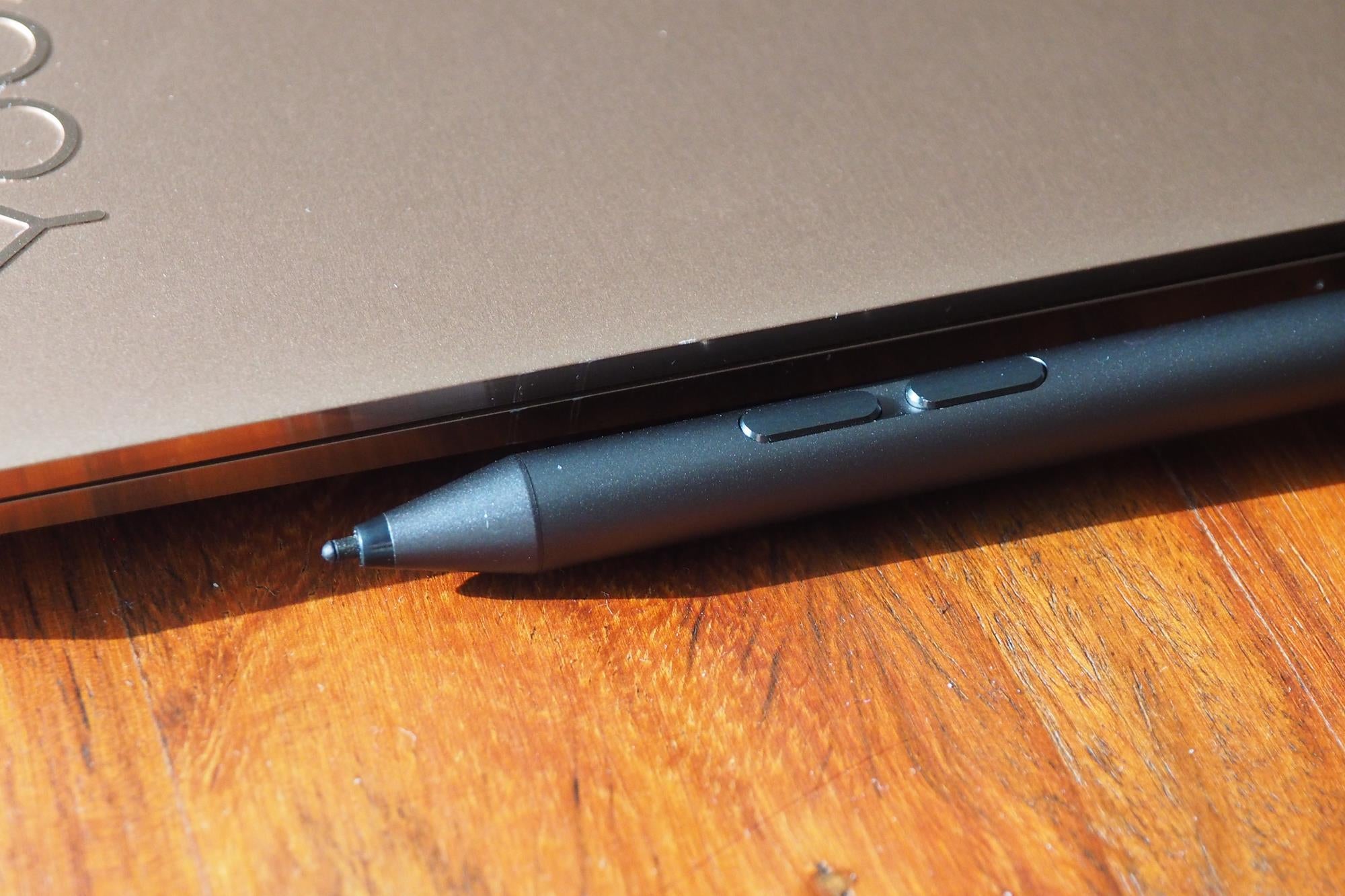 The backlit chiclet keyboard has a solid, if slightly spongy, feel. It isn’t quite as crisp and reactive as the Surface Pro’s Type Cover, but it’s still a cut above the average – and comfortable enough in day-to-day use.

The Microsoft Precision-certified touchpad is also up to the task, and a decent size. I didn’t experience any issues with its responsiveness nor with it registering multi-touch gestures. 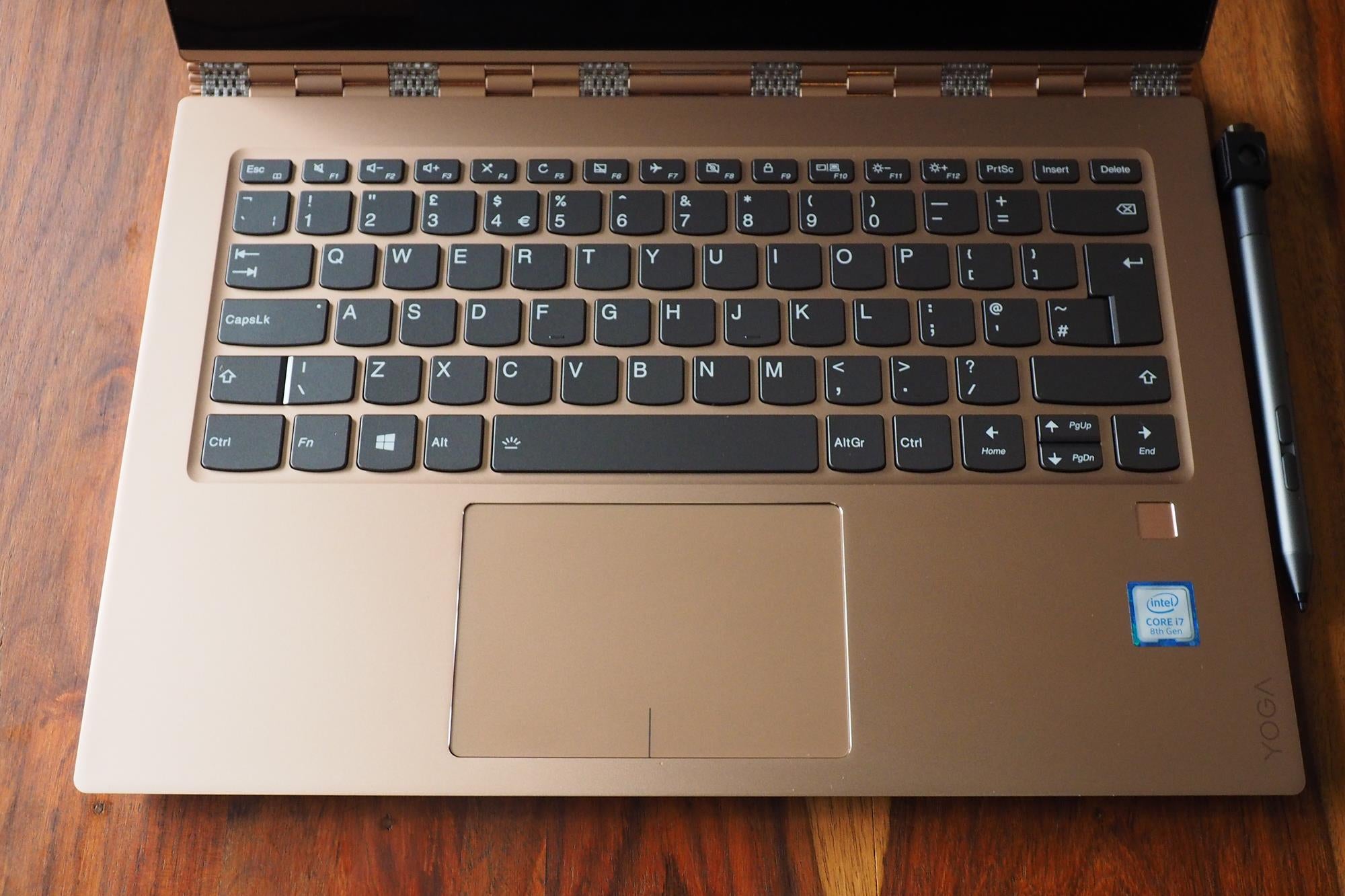 Lenovo’s Active Pen 2 stylus is a welcome bundled addition – it costs £74.99, if bought separately. It can detect 4096 pressure-sensitivity levels and feels good in the hand.

Personally I didn’t get on with Lenovo’s stylus like I have Microsoft’s Surface Pen, partly because the Active Pen 2 is lighter, but also because its nib is harder, not generating enough ‘tooth’ as it’s drawn across the screen.

Again, it does a decent job without being class-leading – and at least it isn’t an optional extra.

If you’re using the Yoga 920 for anything other than serious creativity, the 13.9-inch Full HD touchscreen is very good indeed. It’s bright and crisp, albeit a little more reflective than I’d like.

Web browsing, Netflix binging, spreadsheet twiddling and other jobs that don’t require exacting screen calibration are all a joy on the Yoga, thanks to pleasing colours and good contrast. 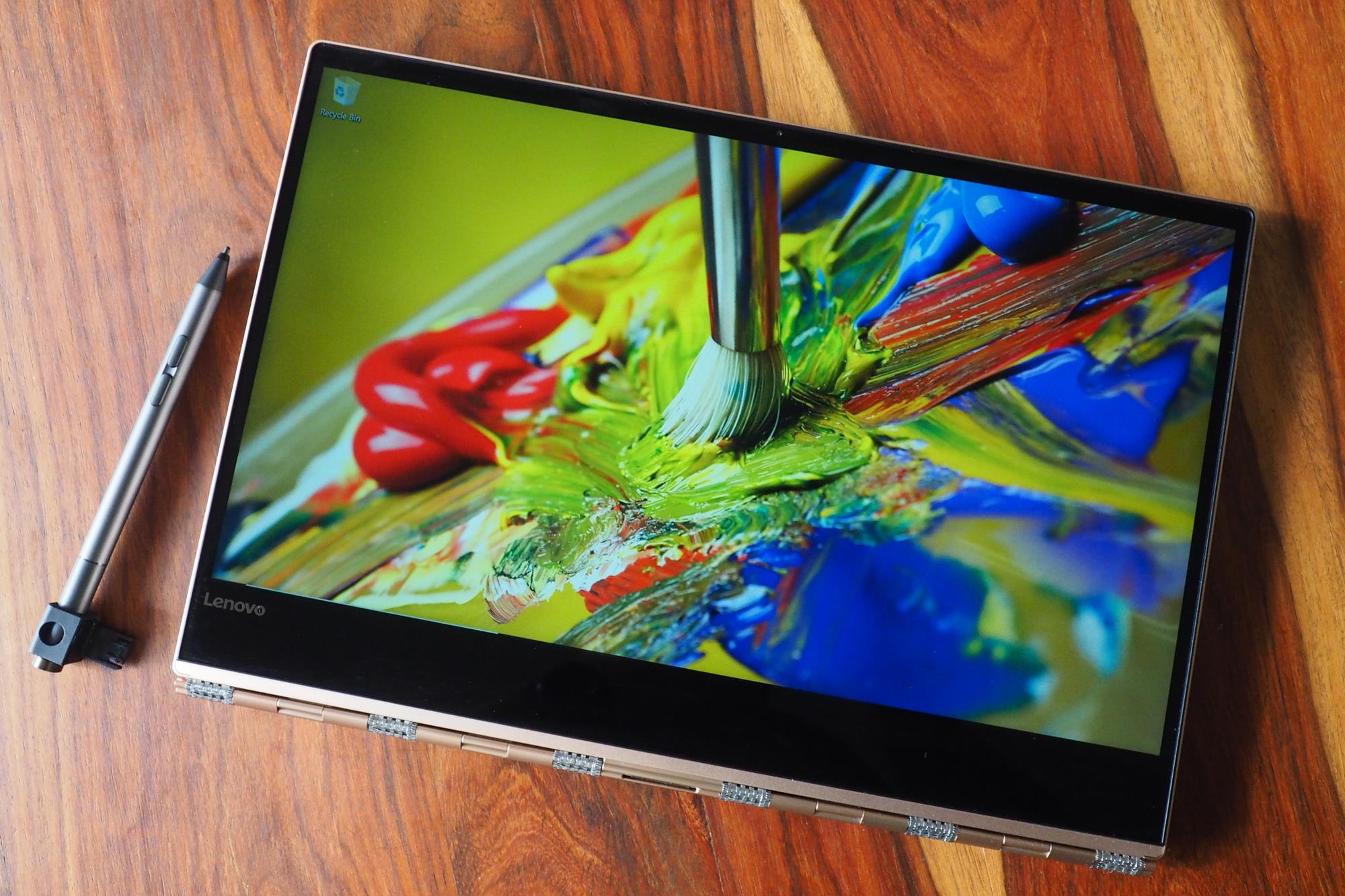 However, the screen covers 82% of the sRGB colour gamut, and only 58.5% of the Adobe gamut. This simply isn’t going to be good enough for those who make a living out of art and design.

Audio comes via a pair of JBL-tuned stereo speakers on the underside of the chassis. They reach decent volume, but sound harsh and brittle – lower mid-range and bass are almost non-existent. Next to the Asus ZenBook UX430U’s smoother, beefier harman/kardon speakers, the difference is obvious. You wouldn’t want to use the Lenovo for music duties, but dialogue-heavy TV shows are just about okay. 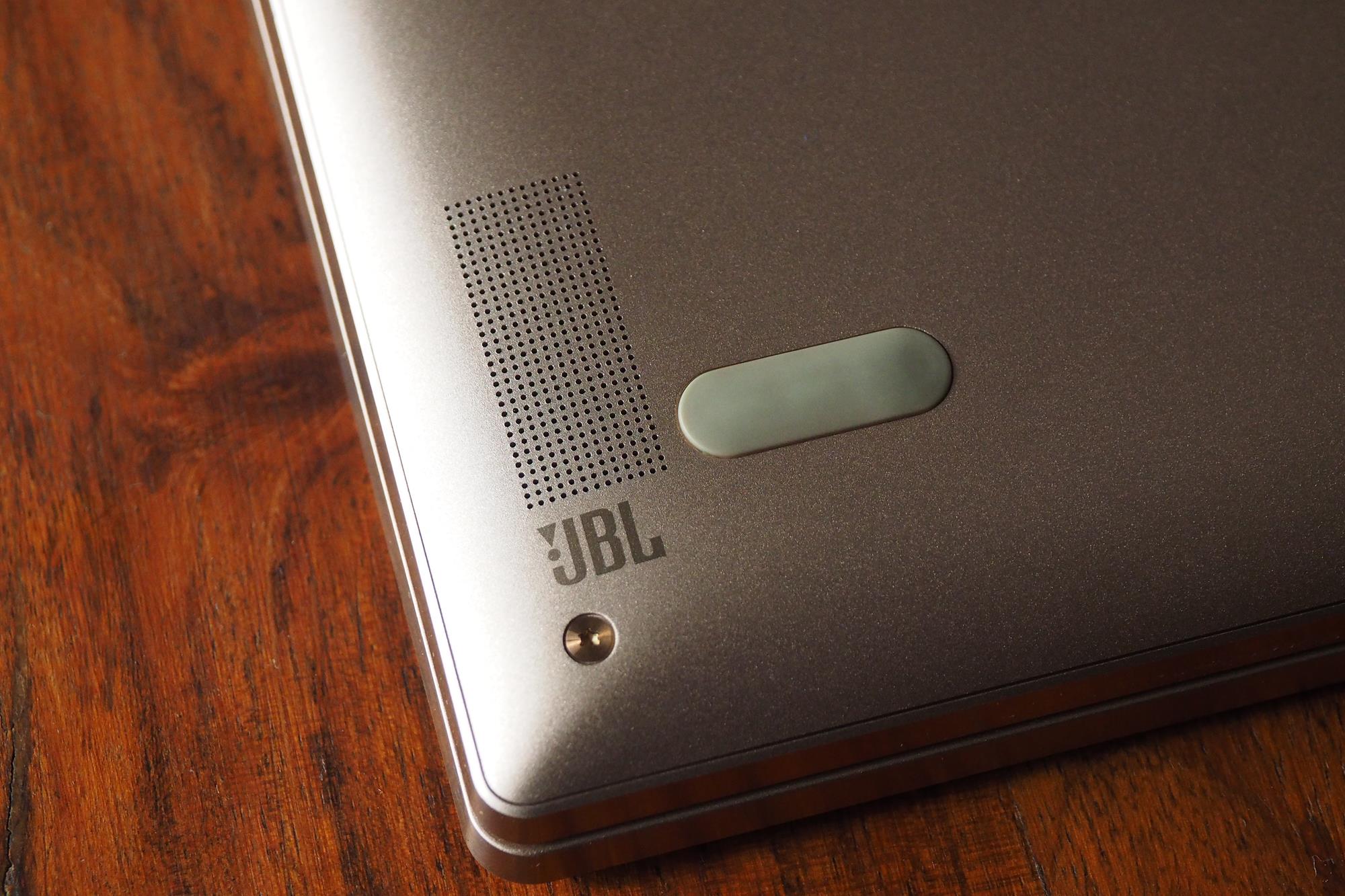 In terms of performance, the big change here is that move to an 8th Gen CPU, which promises a significant boost. Sadly, Lenovo has again chosen not to offer the option of a dedicated GPU, so this isn’t really a laptop for gamers or serious videographers.

For everyone else, however, the Yoga 920 has more than enough oomph to power through anything you choose to throw at it. In benchmark tests, it compared very well with the 2018 Dell XPS 13 and Microsoft’s Surface devices.

In real-world use it lived up to these scores, never once suffering issues with anything from photo editing to video streaming.

In other good news, there’s rarely any noticeable fan noise. This most certainly isn’t a device that regularly sounds like it’s getting ready for take-off.

The fingerprint scanner is also slick, recognising my digits super-quickly, and it was reliably consistent.

The most impressive part of the Yoga 920 package is its battery life. In the Powermark battery test, it ran for an astounding 10hrs 40mins, and it achieved similar results in real-world use.

In fact, this is genuinely the first laptop that I’ve been able to use through an entire day of work without ever having to get near a mains socket. If you do need a top-up, though, it charges incredibly quickly through its USB-C port.

I’d imagine this incredible battery life will take a hit if you opt for the 4K screen, however, so bear that in mind. 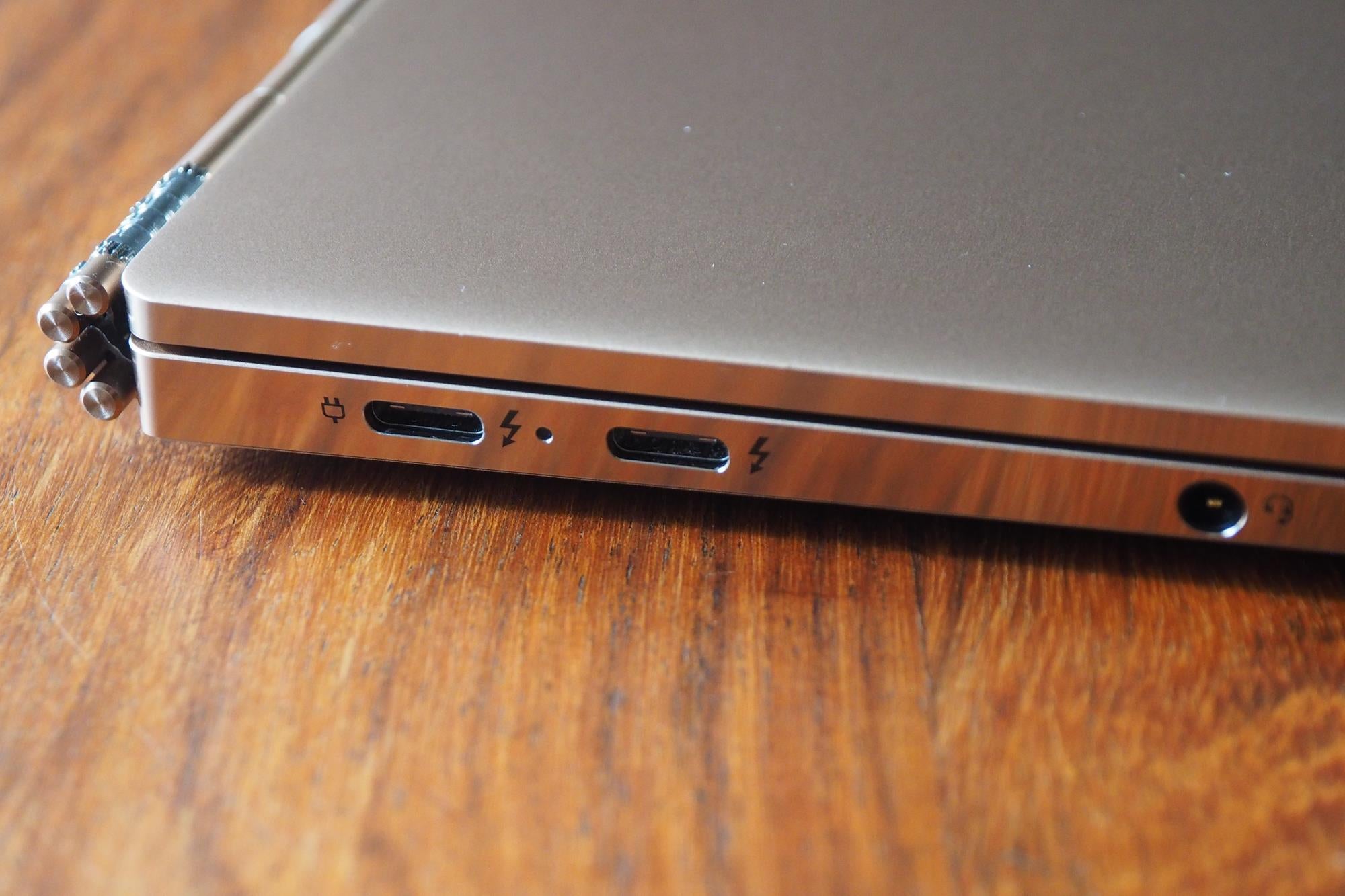 The Yoga 920 may not look that different to Lenovo’s older flagship, but in this instance this isn’t a bad thing. The chassis still looks great and, thanks to the 920’s upgraded port selection and hardware, it still feels very much like a modern Ultrabook.

The versatility of the form factor and the exceptional battery life mean this is a laptop that will suit a great number of people.

However, the screen performance will put off professional designers, and the lack of an option for a dedicated GPU means videographers and light gamers should look elsewhere. And don’t even think about regularly pumping tunes out of its speakers.

As an everyday device for the average user, though, this is one of the best options currently available.

The Yoga is beautiful, powerful and offers enormous stamina. A truly excellent Ultrabook.