It could be said that Lenovo created the foldable laptop market when it unveiled its first Yoga many moons ago. Since then, pretty much every tech company under the sun has jumped on the bandwagon, launching laptop-tablet hybrids sporting 360-degree hinges. Highlights over the last 12 months include the Asus Transformer Flip, Dell inspiron 13 7000 and Acer Spin 7.

The Yoga 910 is Lenovo’s attempt to re-establish its dominance in this space, and it comes loaded with more technical upgrades than you can shake a stick at.

1. It has better components

Aesthetically, Lenovo Yoga devices always impress, but past models haven’t offered the best performance. This can mostly be put down to the use of underclocked Intel M CPUs that offer passable performance at best.

On paper, the Yoga 910 fixes this and comes running one of Intel’s shiny Kaby Lake CPUs. Specifically, buyers will be able to choose between Kaby Lake i5 and i7 CPUs. This is awesome, and it should offer a variety of benefits.

It features a refined technology that boosts the CPU’s efficiency, meaning Kaby Lake CPUs can run at Turbo Boost speeds for longer without overheating.

All sounds great, right? But there is a potential catch. Intel has pulled a bit of a shady trick with Kaby Lake and has rolled the M-branding back into its i-series. As a result, CPUs that last year would have been called “M” will now be appearing as Intel i-series CPUs with slightly altered “Y” serial numbers.

Luckily, unlike Acer with its latest Spin 7 laptop, Lenovo hasn’t used one of the rebranded Ms and has opted to use a full-fat laptop core-i CPU.

Add to this the fact that you can configure the Yoga 910 to feature as much as 16GB of DDR4 memory, and the Yoga 910 should be pretty speedy – although the inclusion of Intel HD graphics means serious gaming will be beyond its capabilities.

I didn’t get the opportunity to benchmark the Yoga 910 at the show, so can’t give a full assessment of its overall performance just yet, however.

The display has also undergone a pretty significant upgrade. Lenovo has taken a page out of Dell’s book here, designing the 910 to have as close to a bezel-less screen as possible – similar to the Infinity displays seen on XPS laptops.

The move may not be terribly original, but it means the 910 looks way slicker than past Yoga laptops.

It will also be possible to upgrade the 13.9-inch touchscreen to feature a 4K panel, which would be a huge help to creatives looking to use the laptop for photo and video editing. The basic 1080p version I tested looked fairly decent as well.

I didn’t notice any backlight bleed on the demo unit, and while viewing angles weren’t as wide as I’d expected, colours looked reasonably balanced. The use of IPS screen tech also means that whites were nicely clean to the naked eye; blacks did appear a little grey, though.

The 910 features the same iconic watch band-style hinge Lenovo’s been using for the past few years. The hinge is a pretty impressive piece of engineering that’s built of more than 300 different parts.

It lets you flip the screen round to turn the laptop into an insanely chunky 14.3mm, 1.38kg tablet or free-stand it in a tent mode.

The hinge will be a little ostentatious for some people’s tastes, but I’m a big fan. It feels robust, and to date I haven’t managed to damage a Yoga during testing – something I’ve come worryingly close to with other flip laptops. The metal chassis also feels fairly well built, and gives the Yoga 910 a suitably premium feel.

By laptop standards, the Yoga 910 is fairly thin. Nevertheless, Lenovo has managed to load the hybrid with a reasonable selection of ports. Along its right and left sides you’ll find USB 3.0 Type-C, USB 2.0 Type-C and full-sized USB 3.0 ports.

4. Redesign of the keyboard and trackpad

Lenovo claims it has redesigned the Yoga 910’s keyboard and trackpad. The only difference I noticed was that the trackpad was slightly larger than that on the Yoga 900 and it’s Microsoft Precision Certified. The lack of significant changes to the keyboard isn’t necessarily a bad thing.

The backlit keyboard has reasonably good travel, although it isn’t quite as tactile as I’d like. Keys feel suitably spread out and, in general, I didn’t have any serious issues typing on the Yoga 910.

Lenovo has added a fingerprint scanner to the Yoga 910. It sits below the keyboard on the laptop’s ride-hand side, and can be used to unlock the laptop. I didn’t get a chance to see how well it performed, but if it’s accurate and fast, it could be a welcome alternative to traditional passwords and Windows Hello for security-conscious users.

5. But expect some Lenovo bloatware

While the laptop’s hardware looks great, I’m a little less enamoured by some of its software. Bloatware isn’t quite as bad as it is on some competing OEMs, such as Acer and Asus, but Lenovo has still loaded more custom apps onto the 910 than I’d like.

The apps aren’t offensive, but fail to add anything to the Windows 10 experience – and in honesty, I’d have preferred that Lenovo had done a clean install of Microsoft’s OS. However, this is a gripe I have with pretty much every laptop these days. 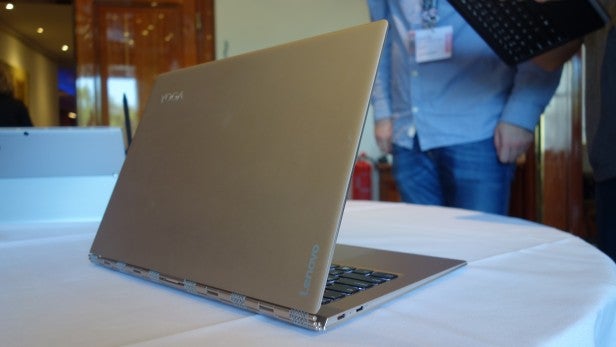 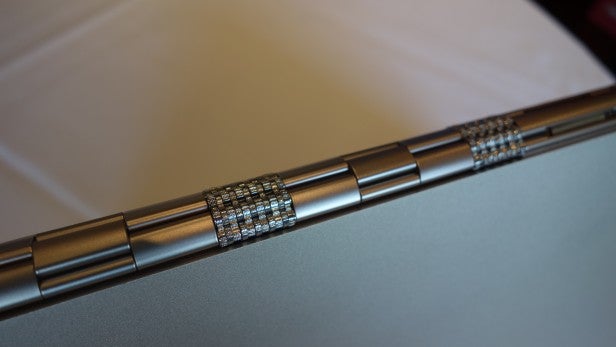 And it features Lenovo’s signature 360 hinge 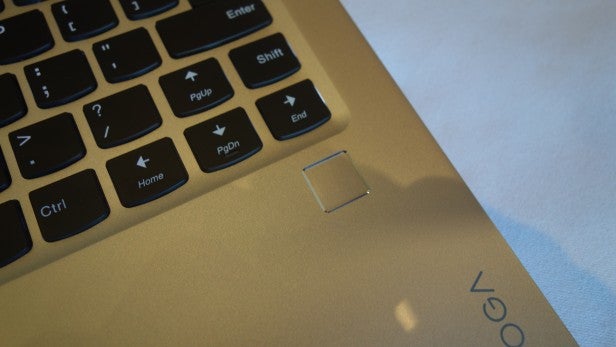 Plus a new fingerprint scanner 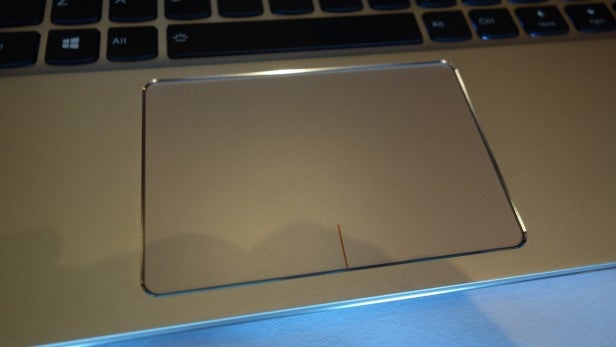 The touchpad has also been improved 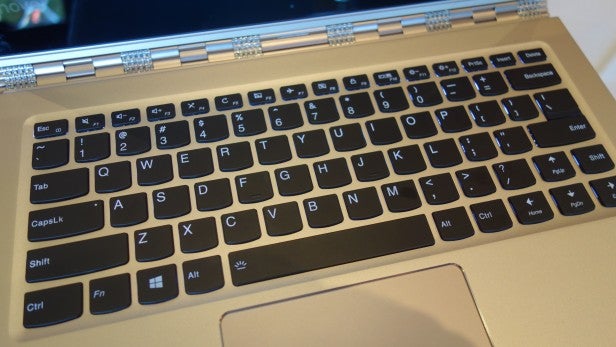 As has the keyboard 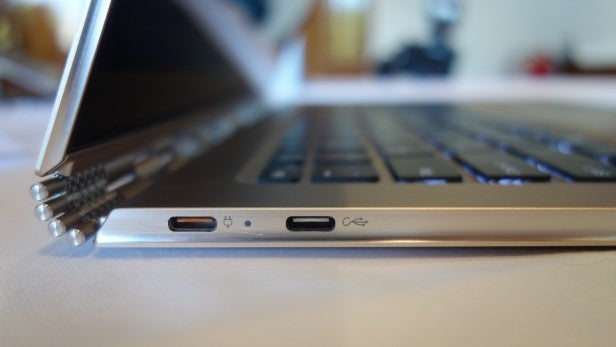 Lenovo has loaded it with a decent selection of ports 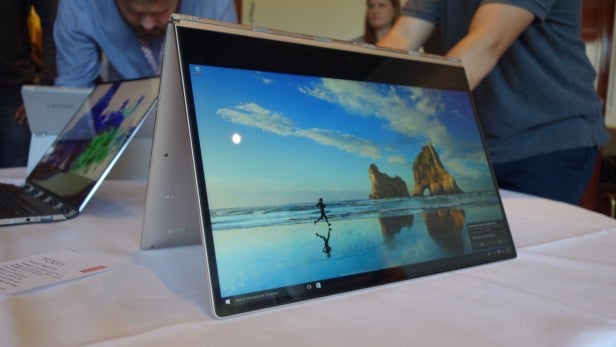 The Lenovo 910 is set to hit stores later this year with a recommended RRP of £1,099 for the most basic configuration.

The Yoga 910 could be one of the best Ultrabooks to hit the market this year. Lenovo has ticked all the right box hardware-wise, loading the Yoga 910 with full-fat core-i CPUs and adding a useful 4K option.

Add to this the return of Lenovo’s nifty 360-degree hinge and I can definitely see the 910 being a competitor to Dell’s XPS 13, which was TrustedReviews‘ recommended Ultrabook last year.