In an age of ultra thin laptops and even skinner smartphones the notion
of ‘more for less’ has become a motto of the modern gadget buyer. This
is something embraced by Swiss audio specialist Lenco which has come up
with a compact Apple dock which also claims to double up as a CD player,
radio, video output and surround sound system for less than £230. Is
this another case of more for less or false economy?

Out the box our initial leanings move towards the former. Lenco is a
brand looking to move away from its budget origins and the ‘IPD-9000’ is
its biggest step to date with neat, minimalist styling that could have
come via Denon’s design team. This look is centred on the attractive
facia whose metallic finish is actually metal and the tasteful blue-lit
LED display and lighting around the slot loading CD player and oversized
volume knob. 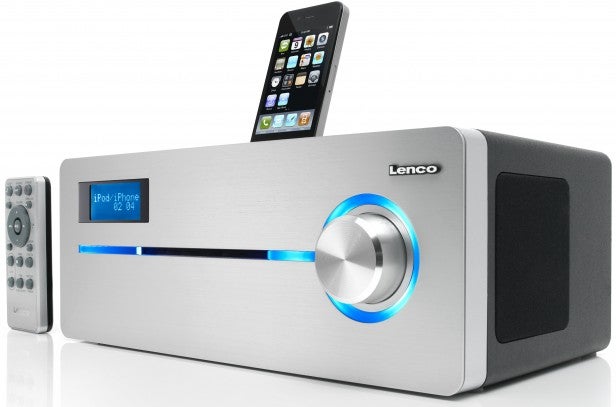 Frustratingly this look is not continued throughout with the rest of the
IPD-9000 constructed from matt black plastic. This two tone approach
creates a slightly jarring appearance from any angle but straight
ahead, though construction is solid and it certainly catches the eye.

The IPD-9000’s design may be minimalistic but its functionality is not.
The aforementioned CD playback is an increasingly rare and therefore
increasingly welcome differentiator. Meanwhile connections along the
back include the usual power, auxiliary in and another fast disappearing
feature: an FM aerial, but they are backed up by the more unusual site of a
composite video output. This allows video playback on an attached iPhone
or iPod touch to be outputted to a TV with the audio coming from the
IPD-9000. 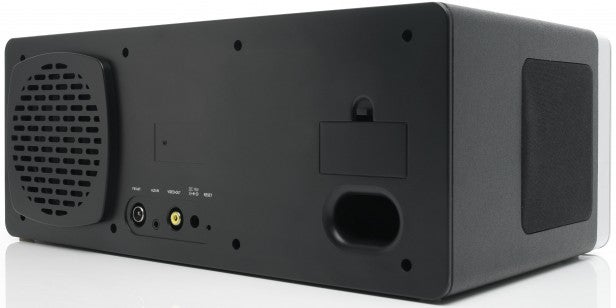 In this scenario it is strange Lenco didn’t opt for a DVD rather than CD
player as it did with the
IPT-223 or adopt video codecs (only traditional CDs and MP3s encoded
discs are supported). Further omissions are DAB radio instead of FM and,
more disappointingly, any form of wireless connectivity in an era when
Bluetooth and/or AirPlay is a near prerequisite. As such the IPD-9000’s
surprising additional functionality is rather let down by its more
obvious omissions.

Still with any audio device what everything comes down to is sound
quality. On paper the IPD-9000 offers a healthy but not overly
impressive 65W total output comprised of two 10W side-firing drivers and
a 45W rear-firing subwoofer. The approach here is to prioritise sonic
distribution rather than out and out volume and this is aided by Lenco’s
licensing of Sonic Emotion’s ‘Absolute 3D’ spatial sound technology.

Absolute 3D also appeared in the IPT-223 and it works using wave field synthesis (WFS) which gives the impression of audio originating from different places around the room to mimic surround sound. A further benefit of this approach is it claims to eliminate the need for a positional sweet spot with audio sounding equally good from all locations due to this sonic ventriloquism. A similar process is used in Orbitsound’s impressive T9 and T12 sound bars. 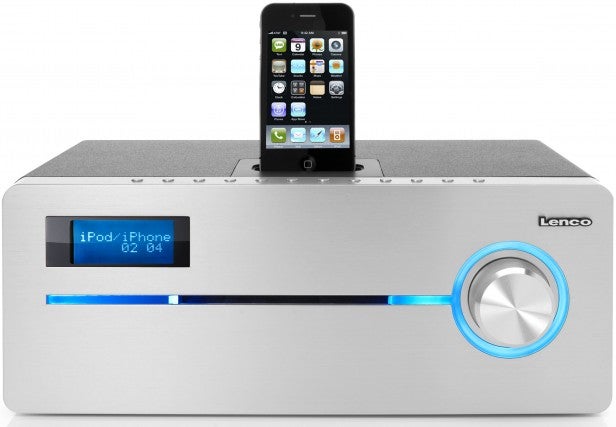 So does it all come together? Yes and no. On the plus side Absolute 3D works well. The unit may be small at 350 x 210 x 130mm and 3.5Kg, but it does an impressive job of throwing out audio around a room making it a delight for tracks with strong stereo separation such as Radiohead’s Street Spirit (Fade Out). The pleasant side effect of this is volume doesn’t need to be as loud meaning the 65W output isn’t too lacking despite the presence of similar sized 200W docks like the Audyssey South of Market.

The trouble is Sonic Emotion doesn’t paper over cracks inherent in the drivers. Bass and treble can be adjusted on both the top of the dock and the (rather cheaply constructed remote control), but where the IPD-9000 primarily falls short is midrange giving audio a rather hollow sound that the virtual surround sound alleviates but cannot completely eradicate. When cranked up to full volume distortion also creeps in, but the bass-focused signature at all other listening volumes is crowd pleasing.

Value
All of which means the IPD-9000 has promise, but needs to be keenly priced. The £229 RRP is reasonable in isolation but, as ever, the trouble for any dock daring to cost more than £200 is the bargaintastic Monitor Audio i-deck 200. This 140W 2.2 dual speaker, dual sub dock with integrated DAC and automatic positional configuration easily bests the IPD-2000 sonically (as it does most things below £500) and its greatest shortcoming – no wireless connectivity – is not exploited by Lenco.

As such while we want to like the IPD-9000 and see it as a step in the right direction – both in terms of audio quality and design – it really needs to be priced under £200 to get our juices flowing.

Verdict
The IPD-9000 is an attractive dock which is a showcase for the potential of virtual surround sound, but this cannot mask shortcomings in its midrange and a fairly low maximum volume. Furthermore features like a CD player, FM tuner and composite video output fail to hide the big omission of wireless connectivity. Pricing is reasonable, but stumbles too close to heavyweight rival the Monitor Audio i-deck 200 and consequently it is a case of close, but no cigar.