We may as well accept it: convenience wins out, and in many cases convenience means bulk. Gone are bulky televisions, laptops and brick-shaped phones while elaborate setups like 5.1 speaker systems are deemed too substantial and complex for our increasingly minimalist sense of style. Step forward Orbitsound…

The company famous for its spatial stereo technology has come up with the ‘T9’, a drastically smaller version of its long running Orbitsound T12. Naturally enough Orbitsound claims this little brother will still deliver jaw dropping audio, but out the box this is initially hard to believe.

Orbitsound T9 Soundbar not for you? Check out our round up of the best soundbars to buy 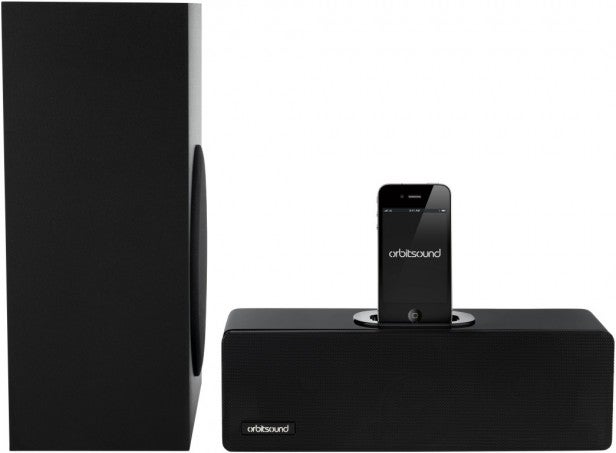 Design
Whereas the T12 soundbar was already compact measuring just 605 x 110 x 100mm, the T9 is less than half its length at 300mm with its depth and width a mere 94mm. It is smaller than a shoebox… made for one shoe. The accompanying subwoofer has also been hit by a shrink ray. While the T12 sub came in at 460 x 230 x 230mm, the T9’s sub is 344 x 230 x 139mm meaning the whole unit should squeeze into the tightest of home cinema setups and appease even the most technophobic of partners.

Given the focus on compactness it is no surprise that Orbitsound has also made the T9’s look discrete. Available in black or white, the units are made from lacquered wood (Orbitsound claims this reduces resonance) and each has a smart – if not matching – finish with good build quality. We also particularly like the magnetically attached speaker grill of the soundbar which makes it easy to remove or attach, depending on whether you prefer your drivers hidden or exposed. Less welcome is the sunken iPod dock which means you won’t be connecting an iPad without an adaptor. When plenty of other docks have achieved this in an elegant manner, this is something of a let down.

As for the remote, it is the same as the one supplied with the T12 and gives access to bass and treble adjustment as well as iPod compatible menu navigation controls and the usual play/pause and skip buttons. It won’t win any fashion awards and we would like the volume buttons to be more pre-eminent, but it is highly responsive and durable.

Features
While the Apple dock connector will be crucial to many, the T9 crams a lot more connectivity into its tiny frame. At the back are 3.5mm and stereo phono inputs plus S/PDIF digital, and cables for all three are supplied in the box. There is also a power switch and a volume knob.

The one glaring omission is an HDMI input which will annoy those wanting a completely one-stop home cinema solution. In fairness this shouldn’t be a deal breaker as the T9 is not a true 5/7.1 system, so it would be a compromise anyway. Besides, many will forget about this once the T9 is switched on.

Performance
Taking centre stage in any Orbitsound review is the company’s spatial stereo technology and with the T9 it is no different. In a nutshell the claim is spatial stereo eliminates the geographic sweet spot for stereo in a room and instead allows it to be enjoyed from any position.

How it works is by mixing the audio produced by the drivers with spatial loudspeakers positioned at 90 degrees to them and 180 degrees from one another – in the case of a soundbar that means they are at the ends. Their interaction primarily takes place in the mid frequency band and is reduced at higher frequencies to ensure sound fidelity. When combined with a separate subwoofer the effects can be startling and with the T9 they most certainly are.

For such a small system the performance of the T9 is quite extraordinary. It produces rich, warm and truly room filling audio that is as comfortable with music as it is handling the latest explosive blockbuster. The room filling aspect is perhaps the most impressive element as it is not just the surprisingly high 140RMS output of the T9 which helps achieve this, but the success of the spatial stereo system.

Wherever you sit in a room there is a sense that the sound has been repositioned just for you. When you are camped in front of a movie this isn’t vital, but for music (when you are more likely to be moving around) it is a revelation and it won’t matter that the T9 itself is probably stuffed under the TV. Those who prefer to arrange their rooms stylistically rather than based around their audio equipment will rejoice.

Naturally enough though, we do have some quibbles. For those with specific sound signature preferences the T9’s treble and bass adjustment is crude taking rather substantial jumps with each press on the remote. As such it is easy to find yourself stuck in a too much/too little scenario, but we can’t imagine it will bother the majority of listeners. In addition, good as spatial stereo is, it doesn’t respond particularly well with lower bitrate music and can sound more monotone than spatial so some re-ripping of your CD collection may be required (and recommended in general, in any case).

Value
Orbitsound has managed to bring the T9 in at a fraction under £200 so as well as its audio being focused on attaining a universal sweet spot, we think its pricing is too. For £199 you are getting an Apple dock and soundbar all-in-one which is capable of outdoing more expensive alternatives in both categories. And we still can’t get over just how small it is. 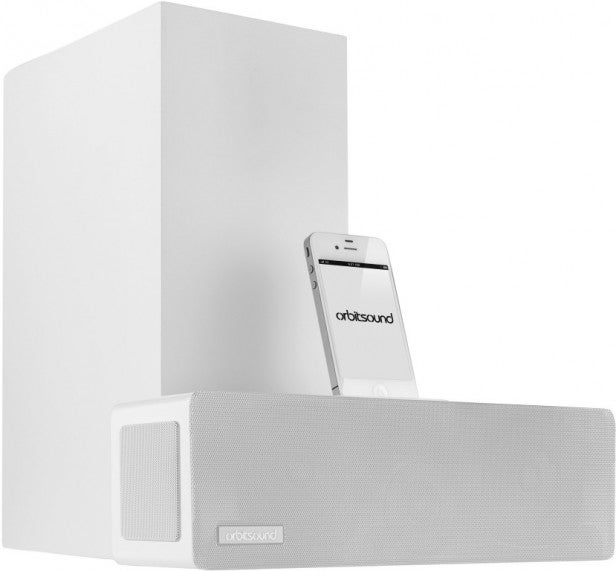 In terms of what is missing, we’d certainly have liked to see HDMI included but equally Bluetooth (specifically with aptX) would have added a welcome wireless audio option. Apple fans will point to AirPlay as well, but given the premium surrounding it the price would’ve taken a significant jump and an AirPort Express unit can still be attached for those unable to live without it.

All in all then the T9 is exceptional value for money and this provides the finishing touch to an already exceptional device.

Verdict
It is hard to fault the T9. Obitsound has produced a much smaller and cheaper version of the superb T12 with truly size defying performance. The tiny soundbar and its sub will devour music and home cinema content with equal glee and fill out even the largest of rooms. If anything Orbitsound may have undercut the need to purchase the more expensive T12. Omissions include HDMI input and any form of wireless audio streaming, but for the sub £200 price tag they are difficult to dwell upon.