Available on Xbox One (reviewed), PS4, PC, Xbox 360, PS3, Wii U
A whole Lego Star Wars game devoted to just the one film? I’ll admit that my first response to TT Games’ latest was fairly cynical. While we know the Lego series works well for trilogies or even looser themed collections (see Lego Marvel’s The Avengers), could one movie really stretch out over many hours of gameplay without cramming in too much filler? Well, Lego Star Wars: The Force Awakens has not merely dispelled my snark but made it feel unwarranted. It’s yet another great example of how the series can hold onto its core while managing to quietly innovate, and might also be the funniest Lego Star Wars game to date.

Perhaps the biggest surprise is the scope of the game, opening with a prologue that reworks the climax of Return of the Jedi – and in more style than in The Original Trilogy game – before taking us through the events of Episode VII. That much you might have predicted, but TT Games has somehow got permission to take things even further, with a series of unlockable side missions that explore the characters and events of The Force Awakens in more depth. It might be strange to find the exploits of Poe Dameron, Kylo Ren and Han and Chewie chronicled for the first time in Lego form, but this helps make Lego Star Wars: The Force Awakens almost unmissable for Star Wars fans. They’ve even managed to get the major cast members to do new dialogue, and that includes Harrison Ford. This, by any standards, is a coup. 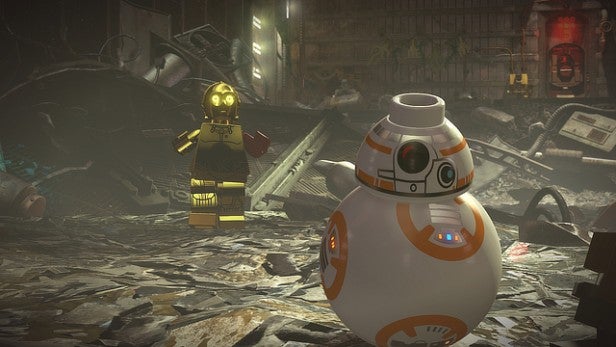 Of course the gameplay doesn’t veer far from the old Lego template, though I think we’ve reached the point where complaining about that is like complaining that Call of Duty involves a lot of shooting people in the face through a holographic sight. You’ll still spend most of your time tackling stormtroopers and space-gangsters with your fists, light sabre or blaster, while smashing the scenery into handy Lego bricks. You’ll turn some of these bricks into new objects which can be used to solve simple puzzles, while collecting characters with special abilities you can harness to get past all the obstacles in your way. This is as true of Lego Star Wars: The Force Awakens as it was true of, well, just about every other Lego game.

Yet there’s always something distinct about every Lego game, whether that comes down to Lego Batman’s costume-based puzzles and open-world adventures or Lego Pirates of the Caribbean’s focus on platforming and melee combat. Lego Star Wars continues its predecessors’ love of vehicle sections with a stream of Starfox-esque flying sequences and dogfights, many of which are good enough to put Star Wars: Battlefront’s meagre efforts in the shade. In fact, I can’t remember having such a good time blasting cannons from capital ships and tackling Tie Fighters since the glory days of Rogue Squadron. 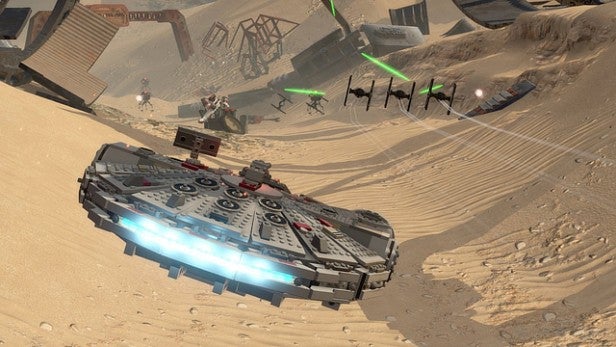 Meanwhile, the new characters bring new abilities into play. BB-8, while weak in combat, becomes a veritable swiss-army-knife of charging, unlocking, traversal and activating capabilities, while Rey is arguably the Lego games’ most agile hero ever, with a range of jumping, wall-running and pole-spinning moves that put her ahead of even Lego Batman’s Robin. Finn, Poe, Han, Chewie and even Kylo Ren also get their chance to shine, and in a way the game manages the same amazing trick as the movie: making you almost as invested in the new faces as you are in the ones you grew up with.

Yet the most impressive thing is that the series can still find new tricks lurking up its sleeves. The first is a simplified cover-shooting mechanic, where racing behind specific walls or doorways allows you to shift with a squeeze of the left trigger into an over-the-shoulder, Gears of War-style view. From here you can move the reticule around to take pot-shots at hiding stormtroopers, though the game might make this a little too easy with an over-zealous auto-aim. Headshots are understandably a no-no and it’s impossible to snipe some enemies, but it makes you feel part of the action in a way that no previous Lego Star Wars game has managed. Add a new range of character-specific special attacks, and you get Lego combat at its best. 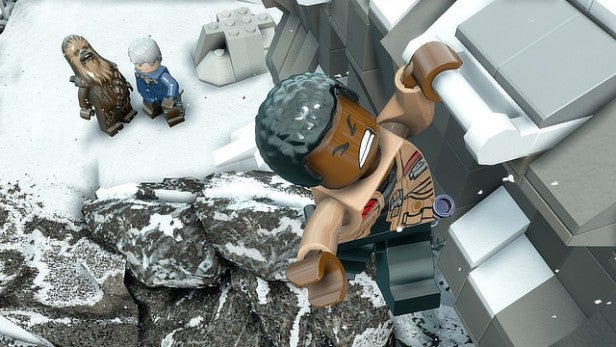 Secondly, many of the old bash-and-build puzzles now give you a choice of where and what to build. One spot might give you a launcher for BB-8, another a rotary switch for Rey to push, another a gun turret or water-cannon, and you decide which to go for first. In some cases you’re just choosing between two or three solutions to defeat one enemy, but in others you’ll need to find the right order to build in, knocking down each build to get the bricks to do the next. This adds a new layer of sophistication to puzzles that might otherwise be stupidly simple. While I’d be the first to say that we don’t look for Witness-level puzzles in a kiddie-friendly Lego game, some of BB-8’s combination lock puzzles are so pitifully easy that they might not actually need to be there.

Related: All the latest news plus a preview of Watch Dogs 2

There are, admittedly, moments where you’ll wonder whether this section or that really deserves to be here, as Rey spends fifteen minutes exploring Maz Kanata’s castle or Finn goes on the hunt for a mug of coffee. Yet for most of the time, Lego Star Wars: The Force Awakens gives you too much fun stuff to do to leave you thinking about it too much. The gameplay holds up brilliantly when playing solo then only gets better when you add another player into the mix. 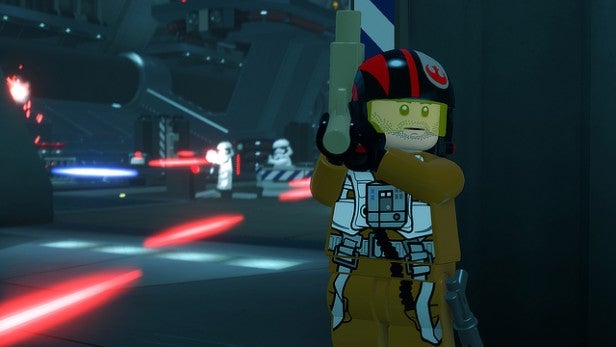 And beyond just getting through the chapters, there’s the real challenge to keep you busy: the constant demand to find and collect everything you can. The lure of more characters, vehicles and those True Jedi ratings will keep you coming back to missions you’ve completed, but with the new story missions requiring a good supply of gold bricks to unlock, you finally have a really good reason to make sure you get every one.

In the end, though, it’s not the gameplay that will make Lego Star Wars: The Force Awakens, one of my most cherished games of the year. Nor is it the graphics, though I think there’s the most lustrous and weirdly realistic the series has delivered (when it comes to rendering plastics, no-one else comes close). Nope, it’s with the laugh-out-loud humour that TT Games has really nailed it. It’s always respectful, always affectionate, but always happy to rip the wotsits out of the scripts, settings, characters and cast. One minute there’s a fantastic sight gag on Han Solo, the next an exceptional skit on Kylo Ren’s teenage angst. Sunbathing stormtroopers, fiendish villains and cuppa-crazy rebels are all butts for great jokes, and the juxtaposition of earnest dialogue with on-screen slapstick is hilarious. If you love Star Wars and loved The Force Awakens, you’ll have an easier job resisting Kylo Ren’s force powers than resisting this.

Verdict
What could have been a cash-in is another classic Lego game. The gameplay is strong, with its new, more sophisticated puzzles, stronger combat and brilliant flying sequences, while the visuals are absolutely brilliant, with the old camera issues on the decline. Yet it’s in the humour that you can really feel the awesome power of the force. Lego Star Wars: The Force Awakens is a smile-generating, laughter-brewing machine, and you’d have to really hate the movie not to love the game.