Available on Xbox 360, PS3 (version tested), PC, PS Vita, 3DS, Wii
There aren’t many games with the cross generational appeal of the Lego series. Kids can enjoy Lego Star Wars or Lego Indiana Jones for the fun graphics and the addictive block-bashing, stud-collecting, character-unlocking gameplay, while adults can love them for the nostalgia, the in-jokes and those ever lovable Lego movie pastiches.

In a way, the lack of the last aspect was the original Lego Batman’s biggest problem. While it had Batman and Robin, a line-up of classic villains and some brilliant puzzle-solving gameplay, it didn’t have that much of a personality to latch onto. While even the Lego Harry Potter and Lego Pirates of the Caribbean games had some good source material to hook onto, Lego Batman could feel a little flat. 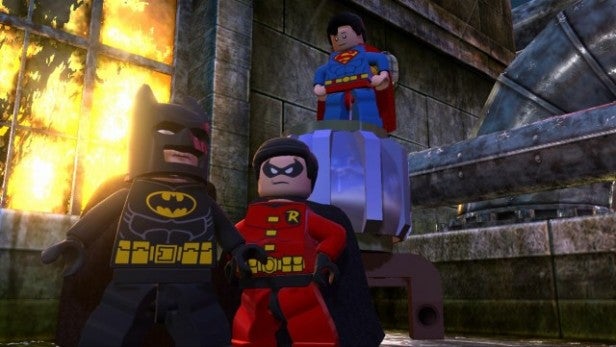 Less Nolan, More Burton
This isn’t a problem for its sequel, Lego Batman 2: DC Super Heroes. While not actually based on the Tim Burton/Joel Schumacher cycle of Batman movies, it’s taken its style – and importantly its score – straight from them, then bought in elements you’ll recognise from the comics, the sixties TV series, the animated series and even Batman: Arkham Asylum and Batman: Arkham City.

Meanwhile, instead of just Batman and Robin, it finds room to field a whole range of DC heroes, including Superman, Wonder Woman and Green Lantern and The Flash, plus some lesser-known stars like Cyborg and Martian Manhunter. 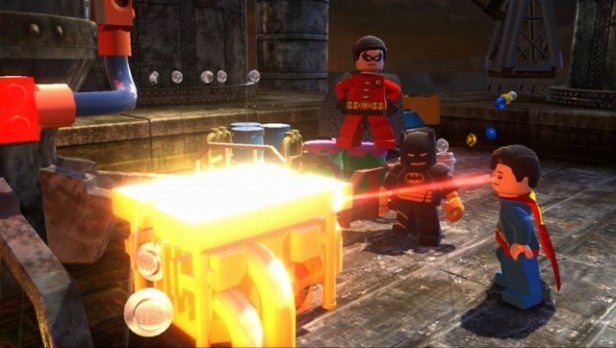 As a result, it’s a treat for comic-book aficianados both lapsed and ongoing, while guaranteed to hit the right buttons with those of us who were kids ourselves when the Christopher Reeve Superman hit and in our youth in the days of the Burton Batman. Racing through Gotham’s exaggerated art-deco-meets-gothic architecture to the strains of Danny Elfman’s theme is one thing, but the moment where Superman takes off to the sounds of the classic John Williams score will go down as one of our top gaming moments of the year.

Grand Theft Gotham
Underneath all this, Lego Batman 2 is arguably the riskiest and most ambitious game the Lego series has yet produced. For a start, it has ditched the hubs of old for a larger, open-world Gotham City setting, which still provides a jumping off-point for the game’s main story missions, but also contains a whole mass of content of its own.

There are endangered citizens to save, villains to bring down, costumes and vehicles to try out and numerous kit parts and gold bricks to collect. It’s not quite a living breathing city in the GTA4-vein, unless you think screaming civilians and bomb-throwing enemies make a convincing population, but there’s enough to see and do to keep you occupied during breaks between the main missions or give you a sandbox for when the central tale is done. 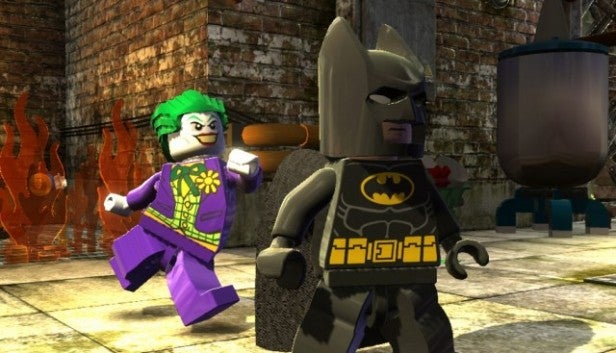 Meanwhile, the levels themselves are amongst the largest and most complex we’ve seen in a Lego game, spanning multiple areas and multiple game styles and featuring some fairly complex costume-swapping puzzles. As in any Lego game, the focus is on making your way through the level, bashing enemies into their constituent blocks and solving various puzzles to shift any obstacle in your way. Lego Batman 2 has the traditional switch-flicking puzzles and those bits where you smash up one object then use the bits to construct another, but like the original Lego Batman a lot of the puzzles involve the various suits that Batman and Robin can wear.

By unlocking various costume-change pads, Batman can put on a Power Suit, with super-strength and bombs, an Electricity Suit, which resists shock damage and can be used to store and release useful currents, a Sensor Suit, which cloaks Batman and allows him to see and manipulate objects through certain walls, and a final suit which allows Batman to glide short distances and fire off sonic beams.

Robin, meanwhile, gets his own Acrobat, Ice and Hazard suits, all of which have their own specific capabilities. Midway through the game you’ll unlock Superman, who doesn’t need a suit because he comes so stuffed with powers, and by harnessing all these capabilities and switching characters or suits, you’ll discover strategies to deal with anything the game can throw at you. 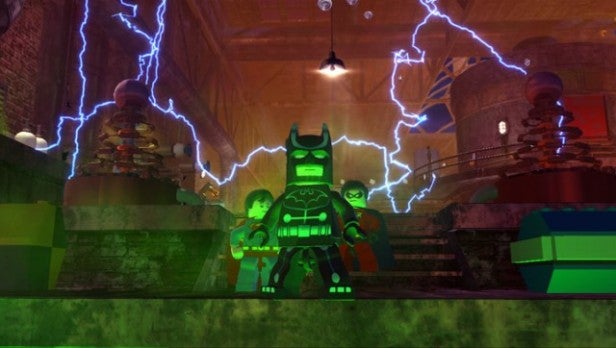 In-between there are a few chase sections, a handful of on-rails shooting sequences and a clutch of boss battles, none of which outstay their welcome. As always, the beauty of playing a Lego game is that you simply cannot fail. Die and you’ll lose some studs – maybe enough to prevent you from reaching Superhero status and getting a coveted gold brick – but you’ll never be expected to restart a level or a section.

That’s partly why the Lego series make such great family games; they work exceptionally well for split-screen co-op play, and anyone aged around five and upwards can join in and have fun. While some of the more complex vehicle controls in Lego Batman 2 make it not so appealing for the youngest gamers as, say, Lego Pirates of the Caribbean, all of the above still holds true. In fact, the larger levels, characters with flight and the different superpowers all make it a bit of a riot.

No More Heroes?
There may be some disappointment that the story focuses so heavily on Batman and Robin at first, adding Superman halfway through then introducing the rest of the heroes only right at the end, but then Lego series fans will know that completing the story is only the start. As always, there are vast numbers of collectibles and characters to find and unlock, and it’s only through exploring Gotham City and replaying the story missions with different characters that you’ll get a chance to find them all. This boosts the running time from the eight hours or so it takes to play the story mode into the stratosphere. 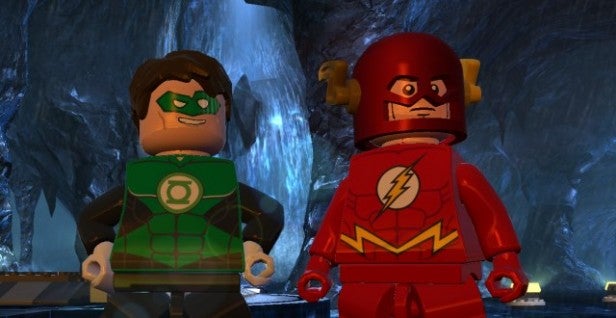 There are grounds for criticism. With two-players the split-screen view and fixed camera angle don’t always make it easy to see where you’re going or what you’re doing, and a few of the jumps and platform manoeuvres are hard to pull off as a result. An ongoing battle against a giant robot drags when spaced over so many levels, and Gotham City isn’t as easy to navigate as it should be, thanks to some hard to see markers and a less-than-ideal route-tracing feature.

The open world structure makes it harder to flick from level to level than in some of the more hub-based games, and it’s a shame that you have to wait so long before you can unlock any meaningful characters. Meanwhile, those wanting something more radical or hardcore from a Lego game will still have ammunition. Lego Batman 2 is stuffed with new and interesting ideas, but that doesn’t mean it’s a radical departure from previous games. 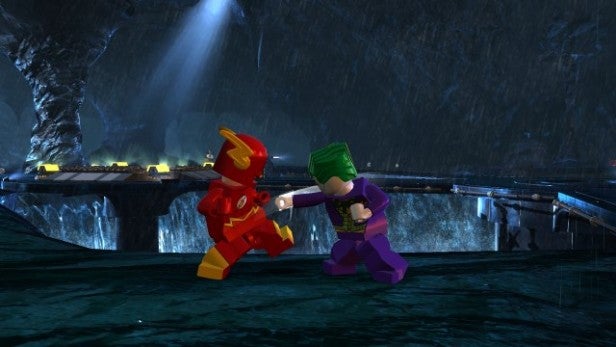 Yet all of these pale when you set them against how much fun this game is, the polish and artistry in the game’s looks and sounds and just how charming everything is. The move to add voices to the characters was always going to be controversial, but the voicework is excellent and the dialogue funny, with running jokes about Batman’s level of misanthropy and Superman’s superhuman smugness going down particularly well with our test audience. There are some very nice in-jokes to do with superhero clichés and certain recent Batman games, and the time spent playing the game flies by.

Verdict
With some new twists on the established gameplay, Lego Batman 2 is the most ambitious Lego title yet. Not everything works all the time, but the gameplay is as addictive as ever and the fun just as infectious. Plus, by harking back to the Tim Burton movies the sequel has found its own personality. This is the Lego series at the top of its block-busting game.