What is the Amazon Kindle Voyage?

The Kindle Voyage is Amazon’s top-of-the-range e-reader. Like the excellent Kindle Paperwhite, the Voyage has a 6-inch backlit touchscreen, but its screen is sharper and clearer. The Kindle Voyage is also slightly thinner and lighter, supports a clever new origami case and adds new ‘haptic’ controls for turning pages. At £169, it’s also £60 dearer than the Paperwhite. Is that too much?

For existing Paperwhite owners, yes: the Paperwhite’s still a fine e-reader, after all. But if you have an older Kindle then the Voyage is an outstanding upgrade. Is it expensive? Certainly, but it’s also the very best there is and will stand the test of time.

In isolation, it’s easy to wonder why you would spend this much on a Kindle when a tablet like the Tesco Hudl 2 is available for less and ‘does more’. It’s a perfectly reasonable argument to make and, if your requirements lean towards a tablet, you shouldn’t give the Kindle Voyage a second thought – you may want to consider the Kindle Fire HD 6 or any of our best cheap tablets. But if you’re mainly interested in reading then the Voyage’s outstanding screen is worth the entrance fee alone.

Like the Paperwhite, the Kindle Voyage has a 6-inch backlit display, but it improves on it in a couple of important ways. One, it has more pixels, which makes it sharper; two, the backlight automatically adjusts to select the right level for the ambient light. These two qualities and the anti-glare nature of an e-ink screen make reading on the Kindle Voyage a pleasure that no tablet can match. 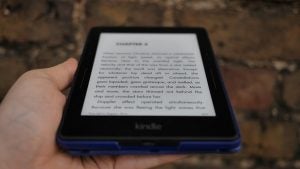 How much sharper is the Kindle Voyage? At 300ppi (pixels per inch), it’s about as sharp as most ‘retina’ phones or tablets and around 35 per cent sharper than the Kindle Paperwhite. The difference is noticeable, particularly as it means you can read smaller text with greater comfort. More so than ever, reading on the Kindle Voyage feels just like a book or newspaper. If you’ve previously resisted e-readers on account of fuzziness, the Voyage may well convert you.

The adaptive brightness, meanwhile, is a subtle but brilliant addition. The main benefit is that it selects the right brightness for the conditions. You could do this manually, but the automatic system works very well and it’s one less distraction from remaining absorbed in your book. It also smartly changes the brightness very gradually, so you don’t get distracting jumps. This is equally true when switching from bright light to complete darkness, as the Night Light setting gradually reduces the brightness as your eyes become accustomed to darkness. 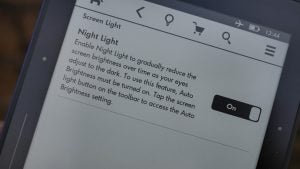 The Kindle Voyage really comes into its own when reading in the dark. You notice the sharper text all the more and you suffer none of the eye-strain that tablet a generates even at its lowest brightness setting. And, of course, when outdoors the Kindle is in a completely different league – nothing new there. 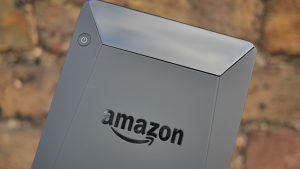 The Kindle Voyage looks and feels great, though the differences between it and the Paperwhite are subtle. It’s marginally slimmer and lighter, but marginally is the word, while the rear adopts the same two-tone gloss and soft-touch finish as the Kindle Fire tablet range. It’s fine, but nothing to get excited about.

More interesting are the new PagePress controls, which mimic the physical controls of older Kindles but using pressure-sensitive ‘haptics’ instead. This means you never have to move your hand, as you simply squeeze the edge where your hand already rests to turn the page. 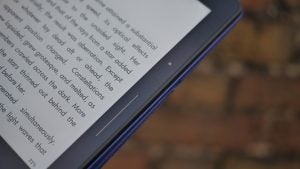 Opinions vary on how useful the PagePress buttons are, but we really like them. They’re more convenient than tapping the screen each time, but they don’t disrupt the smooth lines of the Kindle’s frame. The only tricky problem is that they’re slightly hard to locate in the dark, but their location soon becomes second nature and you can still resort to tapping the screen.

The touchscreen itself is pleasantly responsive, though the e-ink screen still isn’t slick enough to emulate the speed and responsiveness of a tablet. We much prefer the smooth finish of the Kindle Voyage’s display, though. The Paperwhite’s slightly recessed screen has an unpleasant coarse texture, but the Kindle Voyage’s is smooth. It’s a small detail, but it’s another that makes the Kindle Voyage nicer to use. 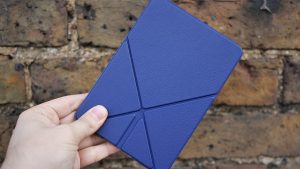 Battery life is an historical strength of Kindles, albeit one reduced by the introduction of backlights. Amazon claims up to six weeks when used 30 minutes per day with wireless turned off and the backlight set to 10. We found four weeks is a more realistic figure for a regular reader.

As with most recent Kindles, the Voyage doesn’t have a headphone jack, so it doesn’t support audio books. We don’t feel this is a huge problem, though, as a phone or MP3 player are a more convenient means of listening to them. 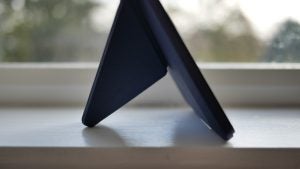 Format is another thorny issue for some, as the Kindle Voyage doesn’t support ePub books from other stores. Existing Kindle owners will have made their peace with this long ago, but if you’d rather not be locked into Amazon’s ecosystem – excellent though it is – then nothing has changed here.

Finally, Amazon has introduced new cases for the Voyage, priced from £35 up to £55 for the leather version. The main feature is the folding ‘origami’ stand, which is perfect for propping on tray tables. It’s also magnetic – it clips on magnetically and the front cover automatically wakes and sleeps the Kindle when opened. 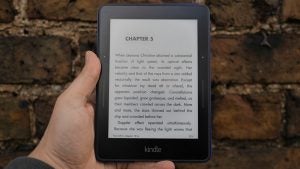 Should I buy the Amazon Kindle Voyage?

We’d prefer it if the Amazon Kindle Voyage were £20 cheaper – it feels expensive. But it’s also an outstanding product and the very best e-reader on the market. The screen is great, the PagePress system is a small but useful improvement, and the Amazon Kindle ecosystem remains incredibly strong.

This is also the first e-reader that really looks as crisp and readable as a real book. Add in the benefits for night-time reading and the convenience that the Kindle Voyage affords, and it’s a great choice for anyone for whom reading is their favourite pastime.

The ultimate e-reader for the serious bookworm, though some will be put off by the price.