Design
The V515 has the same sleek angular body as the VX715, with a pleasant blend of the industrial and the stylish, although this time in black. It’s smaller than a smartphone in most dimensions, although more than twice as wide. Despite the small size, though, the V515 still packs in a reasonably sized sensor. The 1/4.1-inch CMOS incorporates back-illumination technology and sports 3.3-megapixels, more than enough for Full HD. In fact, thanks to the extra pixels the V515 is able to offer an 18x dynamic zoom on top of the 10x optical one. This crops into the sensor so doesn’t pixelate the image, unlike a purely digital zoom.

Features
Video can be recorded in either AVCHD mode at Full HD or in standard definition as MP4s. In AVCHD mode, data rates can be up to 24Mbits/sec, but this is not AVCHD 2.0 so no 50p recording is available, although the camcorder will output 50p video over its HDMI port. JVC throws in a hefty dollop of interpolation to allow digital still images up to 10-megapixels, with a top resolution of 3,808 x 2,856. The V515 has no built-in memory, so footage and photos are captured to SDXC card. A 16GB module will be enough for around 90 minutes of footage at the top quality setting.

The V515 doesn’t have the Enhanced version of JVC’s Advanced Image Stabilisation, so only has one extra mode on top of the standard one. Fortunately this is still optical rather than electronic image stabilisation, so proves more effective than the abilities some camcorders in a similar price range offer. The built-in lens cover is also partially manual rather than fully automatic. It opens when you open the 3-inch LCD panel to start shooting, which also fires up the camcorder, but you need to use the slider on the side to shut it.

It would be hard for the V515 to have fewer discrete buttons on its body. Apart from the necessary power switch, zoom rocker, photo snapshot and record buttons, there’s just one other button available, used for toggling between image stabilisation modes. Everything else is accessed via the touchscreen LCD. Without the Wi-Fi functions of the VX715, the V515’s initial menu looks a little sparse. Options to enable the Smile Shutter and name display functions are at the top, whilst access to the effects can be found at the bottom.

As we have noted before, JVC’s onscreen effects are really quite elaborate. You can superimpose animated particle streams, for example rising hearts, or blaster beams hitting a chosen point in the frame. You can place hats, a moustache, or glasses over your subjects. You can also draw on your video as it records, or stamp on symbols, such as love hearts. If your video editing software has these capabilities, you will probably be able to create all of these much more effectively on your computer. But that’s assuming you plan to edit your video at all, and if you just intend to upload straight to the Internet, then these effects can offer some fun.

There are more enthusiast-oriented features available if you head from the initial menu to the main menu. In auto mode, you can switch the touch AF/AE mode between face tracking, pet tracking, colour tracking, and area select, which track a reference point within the frame and use that to set focus and exposure. You can also access the high speed and time lapse recording options. The former records footage at a higher frame rate (but lower resolution), which will then play back as smooth slow motion. Time lapse grabs a frame at intervals between one and 80 seconds, and then stitches them automatically into a video. There’s also a pet shot mode, which will record a pet’s face when detected, presumably for unattended surveillance of your beloved animal companion. 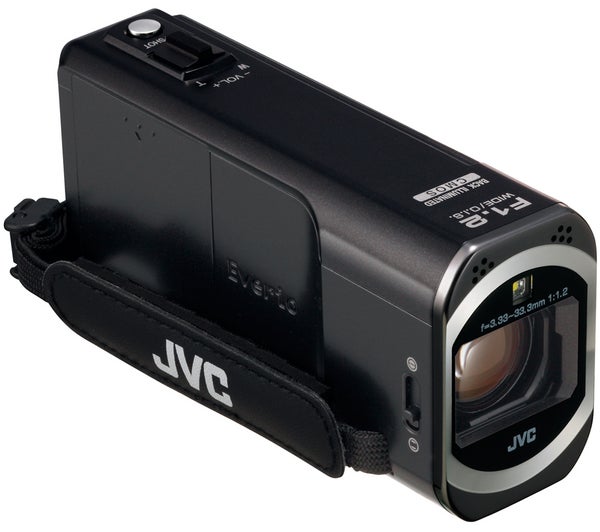 Controls
Switching to manual mode uncovers a few more options. There’s a modest selection of six scene modes, including a couple of night options, portrait, sports, snow and spotlight. You can focus manually using an onscreen slider, which is rather fiddly. There’s an overall brightness adjustment, which ranges from -2 to 2 EV, plus separate controls for shutter and aperture. Shutter can be varied from 1/2 to 1/4000th of a second, whilst iris can be adjusted between F1.2 and F5.6, which is a pretty narrow range. But both can be adjusted independently, or you can adjust either one alongside the brightness control, but not all three at the same time.

As well as automatic and manual white balancing, there are presets for sunny and cloudy conditions, plus halogen lighting and blue or green underwater conditions. However, it takes a few clicks to get to all of these manual settings, and once you have set each one you’re back out of the menu so will need to go all the way back in again. Sadly, back-light compensation, tele macro and enabling the video light are also to be found in the same menu, so they are less accessible than we would have liked. 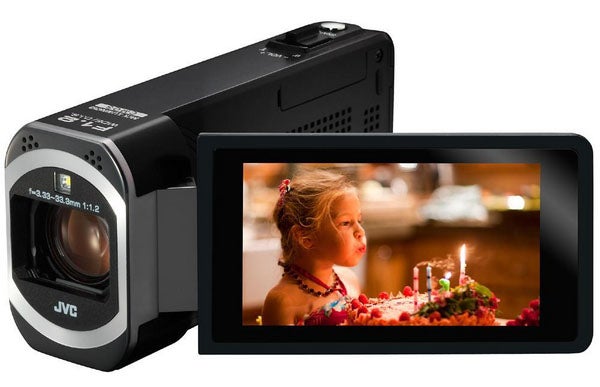 Image Quality
As we have seen from many of JVC’s reasonably priced models, image quality is better than would normally be expected from a camcorder this size or price. Colours are faithful, but not as vibrant as those that, for example, many Sony camcorders produce, although the level of detail is excellent. Best of all, thanks to the back-side illuminated CMOS, the picture is surprisingly bright in low light, and in fact a bit lacking in saturation as a result. But there are only very small amounts of grain, with a slightly better performance in poor illumination than, for example, the Canon LEGRIA HF R38.

Verdict
Like so many JVC camcorders around the £300 mark, the HD Everio GZ-V515 produces better image quality than you might expect. It does lose a few points because its manual features are rather buried in the menu system, but at least they are there, so if you do want to take a little more control of your video the possibility is there. As a pocket-friendly camcorder that can capture decent footage without much effort, the V515 is certainly a winner on value.