Where most other camcorder manufacturers have found themselves caught up in the waves created by the Flip pocket Internet camcorders, Canon has resolutely stuck to traditional formats. So, whilst the LEGRIA HF R38 sits at the compact end of Canon’s range, it’s not as dinky as some of the smallest models from competitors, such as Sony’s Bloggie Sport. But, conversely, it comes with most of the usual features we’ve come to expect from Canon’s camcorders.

The R38 sports a relatively small 1/4.85in CMOS with 3.28Mpixels, although only 2.07Mpixels are actually used for video or stills. The sensor size means the F1.8 lens can provide a pretty powerful 32x optical zoom, and thanks to the extra pixels this can be boosted to 51x in Advanced mode. This crops into the sensor, but doesn’t result in the loss of resolution associated with a traditional digital zoom.

There are three automated shooting modes. Alongside the regular AVCHD option is a Story Creator mode, which is essentially the latter but with onscreen hints and tips based around a theme such as Travel or Kids & Pets. The AVCHD format options range up to Full HD at 24Mbits/sec, and in any other mode than auto you can also enable a PF25 progressive setting instead of the standard 50i interlaced configuration. There’s also a Web mode, which switches format to MP4 and uses 720p resolution at 4 or 9Mbits/sec. The R38 is top of its particular range subset, so comes with a decidedly healthy 32GB of memory built in, as well as a SDXC-compatible card slot should you need more. But you might not, as the on-board allocation will be enough for nearly three hours of footage even at the top 24Mbits/sec quality mode.

Running in parallel with this is the ability to switch between Auto, Manual, and Cinema. The latter adds a film look to your footage via seven preset options, although it restricts some of the other settings that are available, placing it somewhere between auto and manual. In particular, you can’t call on the scene modes that are available with manual mode enabled. Unlike Canon’s higher-end models, there are no priority modes on the R38 for shutter or iris, just a generalised exposure control, which can be adjusted by slider or by touching a spot within the frame on the LCD panel. 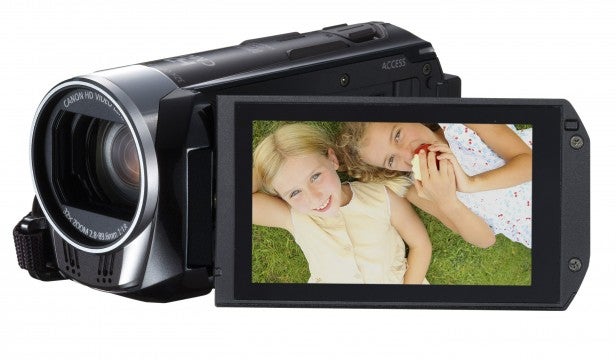 But there are 11 scene modes to choose from, ranging from Portrait to Snow, Beach and Fireworks. You can focus manually using a slider or by touching the screen, and white balance options include a manual mode as well as two presets and the fully automatic setting. Even with the camera set to auto, you can also call upon Canon’s slightly odd Decorations. These parallel the animations JVC camcorders now make available. With Canon’s offering, you can draw on the frame as you shoot, add particles, and superimpose captions including date and time – which might actually prove useful rather than just fun. You can also superimpose an image, and pause the frame temporarily. We would recommend you do all of these things at the editing stage rather than during shooting, but they will be potentially amusing if you intend to share your videos essentially unedited.

As with the last few Canon camcorders we have reviewed, the R38 provides an intelligently switched image stabilisation system. The technology is primarily optical, but it will detect shooting conditions and adjust itself accordingly. If the camcorder is stationary on a tripod, image stabilisation will be turned into tripod mode, which will essentially turn it off. With the R38 zoomed out, dynamic mode will be invoked, which is tuned to reduce the larger, lower-frequency motion of shooting whilst walking. When the R38 is zoomed in, powered mode will be called upon instead, which aims to reduce the higher-frequency vibrations of handheld shooting at a strong telephoto factor. Finally, if you are shooting close-up in macro mode, another appropriate stabilisation setting will be used. 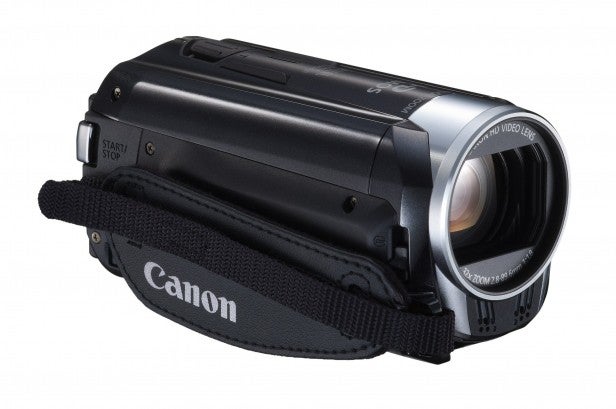 Extra Features?
Despite the R38 being from Canon’s compact range, it still incorporates the same WiFi abilities as the LEGRIA HF M56 and LEGRIA HF M52. These abilities aren’t as extensive as those offered by JVC’s recent WiFi-enabled models, such as the HD Everio GZ-VX715 and HD Everio GZ-GX1. The WiFi abilities merely consist of configuring the R38 so it can send files to a destination wirelessly and be accessed on your network as a DLNA server. In this mode, you can view the camcorder’s contents using a DLNA-compatible network media player. For this application, the MP4 recordings are the most compatible, although in our testing a desktop computer could play the AVCHD files as well. 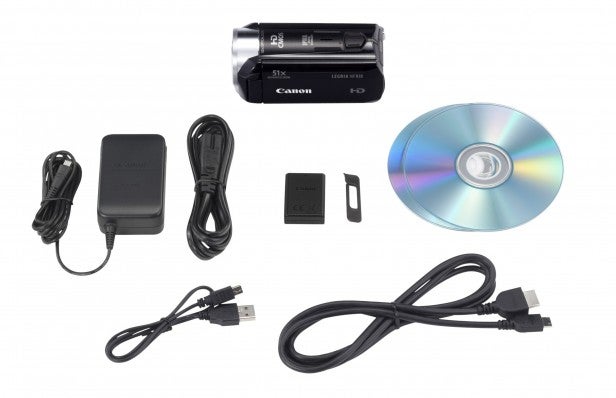 There are few enthusiast features here, with no accessory shoe and no minijack microphone input. With the exception of a few mode buttons on the side of the camcorder, all functions are accessed via the 3in touchscreen. However, the AV output can be switched to a headphone output, and there is manual audio level control.

Camcorders based on Canon’s HD CMOS Pro offer some of the best image quality currently on the market, but the R38 doesn’t have quite such a professional-grade sensor. It can still achieve some great-looking results in good lighting, with Canon’s characteristic vibrancy, which doesn’t stray into oversaturation. But whilst the image remains bright at low levels of illumination, there is noticeably more grain than Canon’s premium models, such as the LEGRIA HF M52 and M56. So whilst low light performance is decent, it does show signs of this being a mid-range model.

Verdict
At under £400, the Canon LEGRIA HF R38 makes a decent mid-range camcorder choice, with good image quality and a reasonable range of features. It is a shame that Canon chose not to include the slightly more advanced aperture and shutter priority manual settings or the picture modes, with the R38, which can be found on higher-end Canon models. The biggest issue, however, is that the LEGRIA HF M56 can be found for not much more, and occasionally less. This may offer much less built-in memory, but picture quality and features are notably superior, making it a clear choice if your budget doesn’t quite stretch to a premium model.