JVC has been a master of small, stylish camcorders for years. The company invented the upright palmcorder over a decade ago, and shipped some of the first hard disk-based consumer-grade camcorders with the GZ-MC100 and MC200 back in 2004. So the sleek, silvery GZ-VX715 has a strong heritage. But is its beauty only skin deep, or are its abilities pretty impressive too?

The chassis sports a sleek brushed metal look, although quite a bit of this is actually plastic. The angular design is slightly industrial, and all the more stylish for it. With a girth of just 36mm and a mere 115.5mm long, the VX715 is rather pocket friendly, too. The internal specification is merely mediocre, however. The sensor is a 1/4.1in CMOS with a reasonable if not earth-shattering 3.32Mpixels, but it does at least incorporate back-side illumination technology, which has proven to be very effective in our testing at improving image quality in low light. JVC throws in a heap of interpolation for digital stills, allowing shots up 3,808 x 2,856 in resolution. Standard definition as well as high definition video can be recorded, with the latter available at up to Full HD resolution and 24Mbits/sec, using the AVCHD format. There’s no memory built in, so a SDXC memory card will be a necessity. A 16GB piece of media will be enough for around 90 minutes of footage. 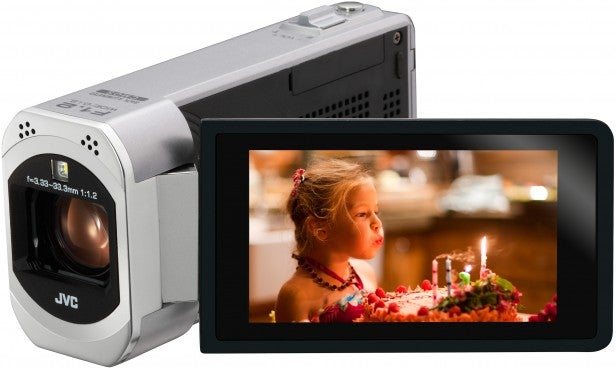 Despite the small camcorder body, the VX715 still offers a reasonable 10x optical zoom. JVC uses some of the extra sensor pixels to provide a 18x Dynamic Zoom as well, which rises to 27x when shooting standard definition.  None of these are quite on par with budget camcorders, but these have smaller sensors, so there’s a trade-off with image quality. Strangely for a camcorder that’s a little above the budget grade, the VX715 has a manual cover over its lens, operated by a slider on the side. This isn’t a huge issue, although it does mean there’s one more task to complete before shooting can commence. 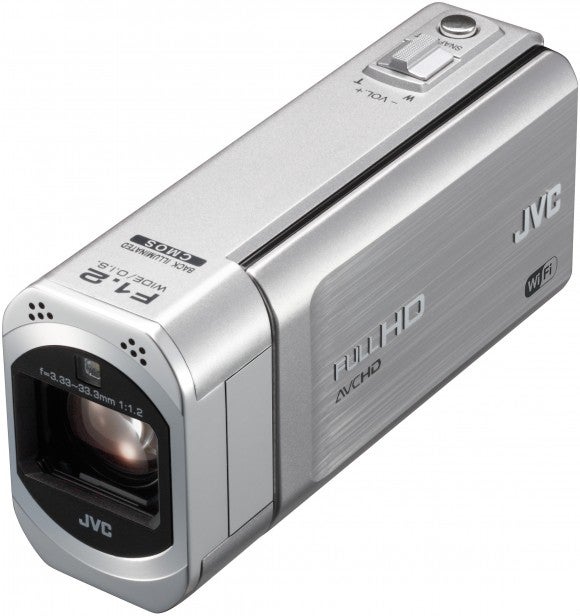 Image stabilisation uses sensor shift technology, which isn’t quite the
same as conventional optical systems, where lenses are moved to
compensate for camcorder vibration. Instead, the sensor moves, but the
results are potentially just as good, and significantly better than
purely digital methods. JVC offers its Advanced version as well, which
doesn’t have as many modes as the Advanced Extended system found in
top-end models like the
Everio HD GZ-GX1, but it does have one more mode above standard that
is tuned especially for shooting whilst walking. We found it reasonably
effective, albeit not quite as capable as the system found in
Panasonic’s latest premium models, such as the
HC-X900.

As with all of JVC’s latest models, the VX715 offers an icon-based quick menu that provides rapid access to what the company considers the camcorder’s most important features. These are not the functions an enthusiast might want at their fingertips, however. Along the bottom of the quick menu are the animated effects JVC is now including with most of its models. You can superimpose flowing hearts and other graphics over your video, place a crown or moustache over someone in the frame, draw onscreen as the video records (for which a stylus is supplied), and stamp symbols over your footage such as stars or bullet holes. On the top right of the quick menu are the smile shutter and naming options. 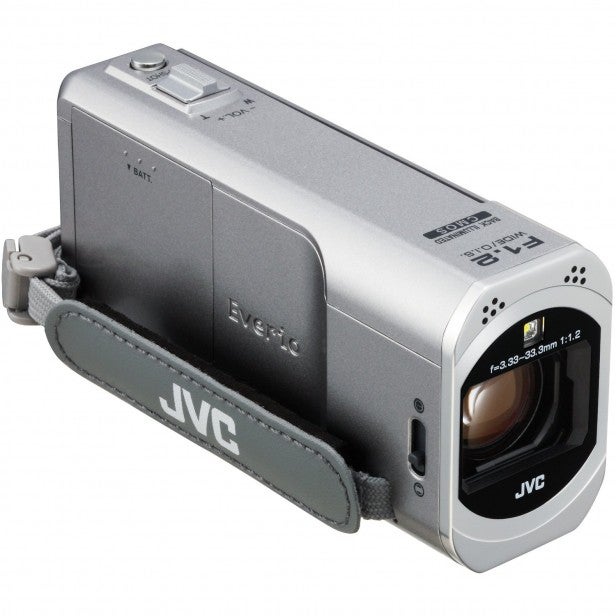 This is also yet another JVC camcorder to sport the company’s wireless technology, which we first came across in the HD Everio GZ-EX215. So there are many elaborate wireless abilities here, and a few of them are available in the quick menu. Setting up the wireless can be a bit of a pain, particularly if you want to use the video mail facility, as you will need to enter server names, user IDs and passwords using a frustrating onscreen keyboard, although it is possible to call up a web interface to the device and use a PC or Mac for some of this.

The wireless feature we think you’re most likely to use is remote
control via an iOS or Android device. You can set the VX715 as an access
point, then use the free apps available for either of these mobile
platforms to control the camcorder. The apps let you see what the
camcorder is seeing, control zoom, and trigger recording and snapshots.
You can also browse the contents of the camcorder’s memory. You can also
use this app, or a Web interface, to gain similar control over a local
network, and even via the Internet, although this requires yet more
complicated setup. There’s also a video mail feature, which will
automatically mail the video you shoot to a predefined email address. A
motion-detection ability lets the camcorder grab a frame when movement
is picked up in the frame.

There are plenty of manual settings
available, including a small selection of scene modes, manual focusing, a
general brightness control as well as separate shutter speed and
aperture priority controls. These can be found in the main menu, which
is another click away from the quick menu. Naturally, manual white
balance and presets are available too, but backlight compensation and
tele macro are also buried in the main menu. We would have preferred
immediate onscreen controls for these in manual mode, or even physical
buttons. But there are in fact only two buttons on the camera chassis
other than the obligatory zoom, record and snapshot controls – for
toggling power, and cycling through image stabilisation modes.

Image
quality is, as the specification suggestions, somewhere in between
JVC’s budget and premium models, and actually closer to the latter than
the former. In optimal conditions, colour fidelity is very good, and
detail is resolved clearly. Low light performance is more impressive
still. We were decidedly pleased with the level of colour and detail,
and the lack of grain, as illumination was reduced. There is a miniscule
LED video light hidden just above the lens, but we suspect you won’t
want to use it in most low light situations. This is yet another win for
back-side illumination technology.

The JVC
HD Everio GZ-VX715 falls slightly between two stools. It doesn’t have
the excellent value of the
HD Everio GZ-E205, nor quite the premium image quality of the HD
Everion GZ-GX1. But it does still provide very competitive performance
and some useful features, with the wireless abilities being particularly
unique to JVC camcorders. If you’re looking for a stylish
pocket-friendly shooter with image quality above the budget level, but a
price that’s only slightly so, the VX715 is an attractive proposition.