What is the JVC HD Everio GZ-RX110BE?

The JVC HD Everio GZ-RX110BE is the latest member of JVC’s growing Quad Proof range. These are essentially standard camcorders, but with the added bonus of waterproofing and rugged construction to provide something different in a difficult time for camcorders. The whole imaging market has been in a state of crisis for a few years now, at least at the non-enthusiast end of the market. The smartphone has become both the camera and the camcorder in the average person’s pocket.

Since the Flip-style candybar camcorder faded out of fashion, JVC’s main answer to this issue has been its Quad Proof range. It’s a sensible idea. Although regular camcorders beat smartphones with their shooting features, particularly optical zooms and image stabilisation, these aren’t necessarily benefits that’ll encourage the average videomaker to carry a dedicated device. However, a camcorder that you can take on the beach, or hiking in the rain, is potentially an easier sell.

The GZ-RX110BE is the second of the more consumer-focused Quad Proof camcorders we’ve seen, after the GZ-R10SE launched earlier this year – although the concept first arrived with JVC’s action cameras, the ADIXXION GC-XA2 and GC-XA1. The GZ-RX110BE is slightly more high-end than the GZ-R10SE, but primarily because it comes with Wi-Fi and 8GB of internal memory, whereas the lesser model relies exclusively on its SD memory card slot. Otherwise, the two are very similar.

The Quad Proof name refers to the fact that members of the range are toughened against four types of potential danger – water, dust, being dropped, and exposure to freezing temperatures. The waterproofing extends to a healthy depth of 5m and is certified to IEC Standard publication 529 IPX8, so this camcorder will be perfectly safe in most swimming pools and shallow seawater. It should even be up for snorkelling or modest diving.

The GZ-RX110BE is rated to withstand a drop from 1.5m, too, according to MIL-STD 810F Method 516.5-Shock. The GZ-RX110BE achieves its toughness with a solid clear plastic window over the lens, plus a rubber cover over the ports and memory card slot on the rear that locks into place with a two-part process. This should make it virtually impossible to open accidentally, and also gives it dust proofing to IEC Standard publication 529 IP5X. 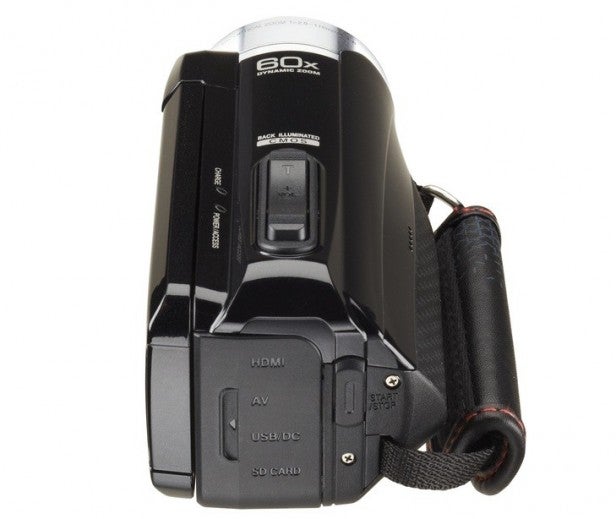 So the GZ-RX110BE’s rugged credentials are very good indeed, and up with many dedicated action cameras. But otherwise this is a fairly standard entry-level camcorder. The sensor is a relatively small 1/5.8-inch back-illuminated CMOS with 2.5 megapixels. This is more than enough for the Full HD shooting resolution and dynamic zoom, although the top 3680 x 2760 still image size will require a little interpolation.

The small sensor and f/1.8-6.3 lens enables the GZ-RX110BE to provide a very healthy 40x optical zoom, which will be more than enough for most situations. However, there’s a 60x dynamic zoom mode available, which takes advantage of surplus sensor resolution to crop into the chip and provide greater magnification without the usual loss of quality associated with a digital zoom – although if you do enable this, it extends to 100x. We’d recommend leaving the digital zoom off.

The image stabilisation is JVC’s Advanced Image Stabiliser, which sits
on top of the digital system. This still isn’t an optical system, but
also utilises the spare sensor pixels rather than being purely digital.
For this reason, advanced image stabilisation and the dynamic zoom can’t
be used at the same time, but with a 40x optical zoom on hand we don’t
see this is a major downside. Also, optical image stabilisation is more
susceptible to drop damage.

Shooting modes have also been
slightly improved over the GZ-RX10SE. The AVCHD format is still used,
and only Full HD (1920 x 1080) resolution available. However, a 50p
mode has been added, which operates at 28Mbits/sec, where the top 50i
mode uses 24Mbits/sec, which is quite a bit more per frame. The 8GB of
on-board memory can store up to 30 minutes of 50p footage, and 35
minutes of the top 50i quality, but a 128GB SDXC card will raise these
figures to 10 hours 10 minutes and 11 and a half hours respectively. 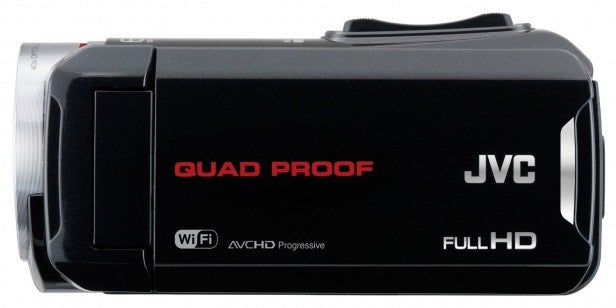 The
usual range of camcorder settings are available, all of them accessed
via the 3-inch LCD touchscreen. In Intelligent Auto mode, the camcorder
offers three different focus and exposure tracking modes – Colour, Face
and Area. You can toggle the auto gain up function, including a slow
shutter option. There is even a small amount of control over the
microphone recording volume.

There are some special recording
modes available as well, including time lapse with intervals of 1, 5, 20 or 80 seconds. Recording effects can be enabled, ranging from grainy
monochrome to one for enhancing babies and one for food, which is a
decidedly odd collection. Animations, such as hearts or flowers, can be
superimposed over the image, if you like your videos cheesy.

Switch
to manual mode, and more options appear. Focus can be operated manually
via an onscreen slider, and there are settings for backlight
compensation and tele macro. The brightness level can be adjusted,
although it’s not possible to access iris aperture and shutter speed
separately. There are also white balance presets for sunshine, cloud,
indoor lighting, and blue or green underwater conditions, as well as a
fully manual mode.

As mentioned earlier, built-in Wi-Fi is another
key feature that the GZ-RX110BE has that its cheaper GZ-RX10SE
sibling doesn’t provide. The camcorder can either act as its own access
point, or be connected to an existing wireless network. This works in
tandem with the Everio Sync 2 apps for iOS and Android. Using one of
these, you can then operate the camera with your smartphone, and even
remotely over the Internet with the help of a DDNS account. When the
camcorder is in direct access mode, it can pick up your smartphone’s
location and use this to geotag your videos as well. 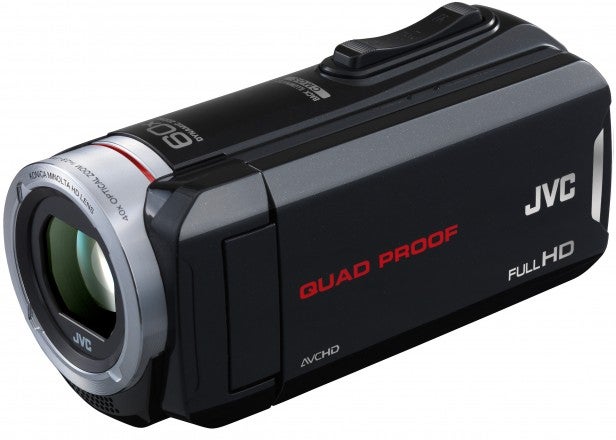 Performance
is no different to the GZ-RX10SE. The small sensor performs well in
good lighting, providing accurate colour and good detail. Although grain
does become evident as the illumination drops, the colour fidelity
remains commendable. This is hardly an enthusiast camcorder, but it will
cope well enough with the variable everyday lighting conditions that
family occasions are likely to present.

One thing you can’t get access to, due to the GZ-RX110BE’s
waterproofing, is the battery. Fortunately, JVC claims the battery will
last 4.5 hours, which we found was an accurate estimate during our
testing. So you can head off on a trip with the confidence that the
camcorder will last a useful amount of time.

Should I buy the JVC HD Everio GZ-RX110BE?

This
JVC offers a good selection of extra features
compared to the GZ-RX10SE, with a similar launch price. You’re still
paying around £100 extra for these and the Quad Proof robustness
compared to a regular camcorder of otherwise similar specification. But
these features do give the GZ-RX110BE a reason for purchasing it
compared to just pulling out your smartphone to grab important moments
on video. As a flexible all-rounder that you can use in most conditions, the
GZ-RX110BE makes a lot of sense, and is reasonably priced, too.

The
JVC HD Everio GZ-RX110BE combines rugged build and Wi-Fi features with a
regular camcorder functionality, for a reasonable price.