What is the JVC HD Everio GZ-R10SE?

The HD Everio GZ-R10SE is the first of JVC’s mainstream “Quad Proof” camcorders. After the success of the ADIXXION, JVC is clearly seeing potential sales in rugged camcorders for less specialised users. The problem with many rugged camcorders – the ADIXXION included – is that they sacrifice some important features, like an optical zoom, in the quest for robustness, leaving the focus firmly on action camera usage. The GZ-R10SE, in contrast, is a regular camcorder, but in a rugged body.

The GZ-R10SE looks like a regular handycam-style camcorder. But its ruggedness stretches in four different directions (hence the Quad Proof name). The camcorder is rated to be waterproof to a depth of 5m and to withstand a drop from 1.5m. The former conforms to IEC Standard publication 529 IPX8, and the latter to MIL-STD 810F Method 516.5-Shock, if you fancy checking up exactly how these ratings were derived.

The camcorder is also rated as dustproof to IEC Standard publication 529 IP5X and freeze proof to -10C, although the latter has no particular testing regime associated with it. There’s no lens cover, just a toughened glass window over the lens. All the ports sit behind a rubber-sealed door that slides into place and then locks firmly shut, although we found it a little finicky. The zoom rocker and record button have a much more solid construction than regular camcorders, too. 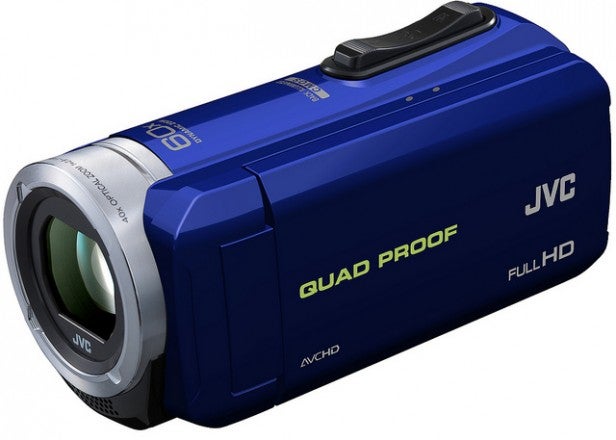 But unlike every rugged camcorder we have tested in the past, the specification is very much in line with current mainstream models. The GZ-R10SE is based around a 2.5Mpixel back-illuminated CMOS, although it is a rather small 1/5.8-inch version. We would have preferred a higher-end sensor, but JVC has intimated that more Quad Proof camcorders are to come, so more premium models could be on their way soon.

The GZ-R10SE records AVCHD at data rates up to 24Mbits per second, and can capture still images at up to 3,680 x 2,760 pixels, which clearly uses a fair amount of interpolation. Video and images are stored on SD memory, with the slot protected by the locking flap mentioned earlier. SDXC cards up to 128GB in capacity are supported, with a 32GB module enough for just shy of three hours of video at the top quality setting.

The most significant difference between the GZ-R10SE and virtually all action cameras, however, is that it offers a proper optical zoom. With a 40x factor, this is way above what even those with digital alternatives have available. The quality of an optical zoom over a digital zoom cannot be overstressed, either. An optical system doesn’t lose resolution, whereas a digital system does.

JVC also offers a dynamic zoom enhancement to the optical zoom, which boosts the factor by 50 per cent to 60x, although you can’t use this at the same time as the image stabilisation system. The dynamic zoom doesn’t work in quite the same way as a digital zoom (which the GZ-R10SE offers up to 100x). Instead of blowing up the video signal, the dynamic zoom crops into the sensor, taking advantage of spare pixels above the 2.06Mpixels required by Full HD. However, the GZ-R10SE doesn’t have enough spare pixels, so the dynamic zoom will still reduce detail when used. 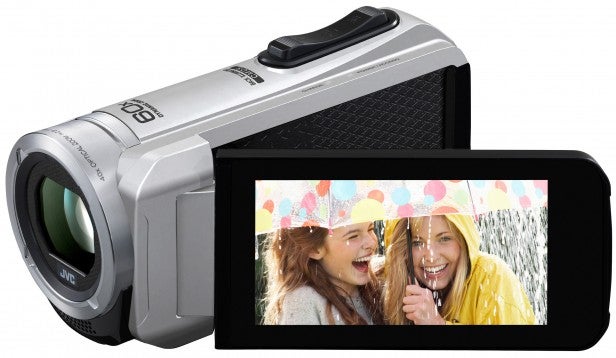 Speaking of image stabilisation, JVC has incorporated its Advanced Image
Stabiliser. The specifications are somewhat unclear as to whether this
is optical or digital, but from our experience of JVC camcorders, the
Advanced Image Stabiliser is a feature that is either available on top
of an optical system, or provided on its own. Here the image
stabilisation is not optical, but that’s not necessarily a bad thing in a
rugged camcorder, as an optical system can potentially get damaged by
extreme treatment.

Action cameras almost always lack manual controls,
and the GZ-R10SE has about the least number of discrete buttons we have
seen on a conventional-looking camcorder. There is in fact just the record button and zoom
rocker. Everything else is operated by the three-inch, 230Kpixel LCD
touch screen. There isn’t even a power button, with opening and closing
the screen used to power the camcorder off and on.

However,
there are still quite a few setting options available. In Intelligent
Auto mode, you can configure whether touching the screen will instigate
face tracking, colour tracking or area tracking. You can toggle Auto
Gain Up and Auto Slow-Shutter, and whether still images are grabbed
singly or in continuous mode. There is even a very limited control over
microphone sensitivity.

There is also a selection of Special Recording
modes, including time lapse of 1, 5, 20 or 80 seconds, superimposing
date and time over the recording, plus baby, grainy monochrome and food
digital effects, which is a slightly strange combination for a rugged
camcorder. You don’t get an array of fancy digital effects, although we
would always recommend adding these during editing where you will have
more control over them.

Switching to Manual mode reveals the usual
range of extras, including focusing with onscreen buttons, backlight
compensation with an advanced mode, and tele macro. Whilst there is an
overall brightness control which can be adjusted between 2 and -2 in 0.3
steps, there is no separate configuration of shutter and iris, and no
scene modes, which is a surprise. White balance options include presets
for blue and green underwater conditions, as well as the usual
artificial light, cloudy and sunny presets plus manual and auto modes.

There
is one other area where the GZ-R10SE is unlike a regular camcorder –
battery life. JVC claims the battery will last 4.5 hours, which is about
twice what most mainstream camcorders can manage, and most action
cameras. This is fortunate, because the battery also differs from most
mainstream camcorders by being non-removable. So you can’t replace it
with a secondary unit, and if it fails you will need to have the
camcorder factory serviced.

Image quality in good lighting shows an
adequate level of detail, although we found the autofocus could be
jittery at high zoom factors. The image stabilisation is also not
particularly effective at high zoom. Performance in low light is decent,
with a good level of brightness maintained and reasonably faithful
colour, although there is a fair bit of grain evident. So the picture is
good, but it’s not outstanding.

Should I buy the JVC HD Everio GZ-R10SE?

If
you want a few more features than an action camera has to offer, JVC’s
HD Everio GZ-R10SE provides a unique combination of rugged build with
full camcorder capabilities. The current UK price of around £275 is also
quite reasonable, although the
HD Everio GZ-EZ515BEK is around £25 cheaper and has the same sensor,
but with optical image stabilisation and Wi-Fi as well. So you’re paying
a bit extra for the ruggedness. But right now there are few
alternatives if you want a real camcorder in a rugged format.

The main thing to consider, really, is whether you want a rugged camcorder for fixing to your helmet or clothing, in which case the bulk and requirement to have the screen open makes this model the wrong choice. If, however, you just want something for ‘normal’ shooting but that can survive a kayaking trip, hike up a mountain and the like then it fits the bill.

The JVC HD Everio GZ-R10SE is a bold and mostly successful attempt to bring action camera robustness to mainstream camcorders.