What are the JVC HA-ET90BT?

The JVC HA-ET90BT are true wireless earphones. You connect your phone and the main earpiece shares the audio with the secondary one. No wires, anywhere.

These earphones are far more reliable than some of the early true wireless sets on offer. However, they’re not the best pair around, sounding smaller and less powerful than some.

Find them at a good price and they’re a solid way to try out true wireless audio tech, though. They launch with a suggested $150 (£107) price. 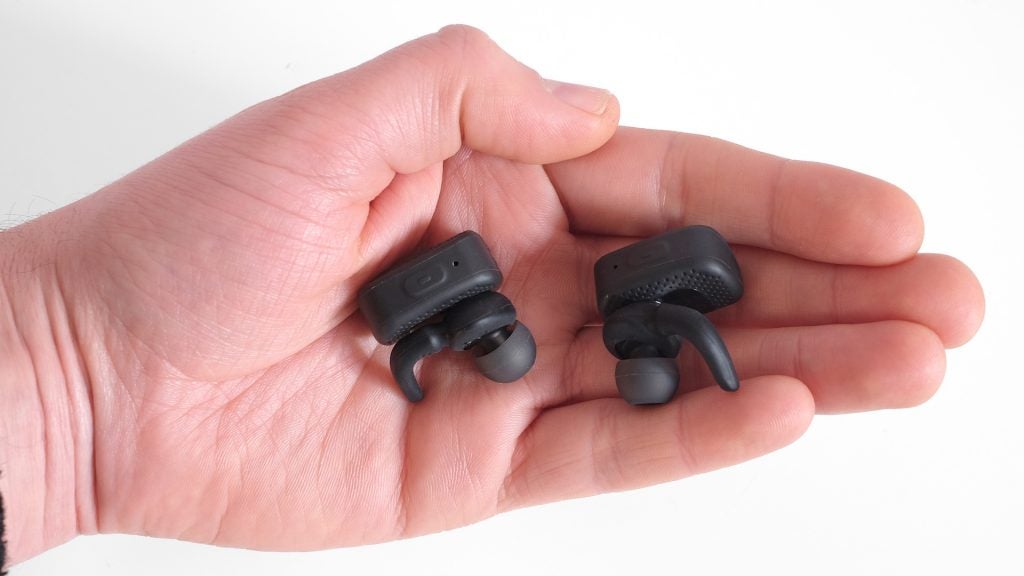 Put the HA-ET90BT side-by-side with a pair of AirPods and you wouldn’t think they’d look less silly than the latter in your ears; but they do.

The HA-ET90BT are like normal earphones with a big rectangular battery on their back. However, since they don’t dangle down like an AirPod, or stick out to a ridiculous extent, they look perfectly fine when in your ears.

The earpieces are hard blocks of plastic, but sport a soft-touch rubbery finish that feels better than hard plastic. These earphones also offer water-resistance.

JVC says they’re rated to IPX5. This means they’re designed to withstand water jets but not being submerged. They’ll say “yes” to rain and sweat; “no” to the swimming pool. 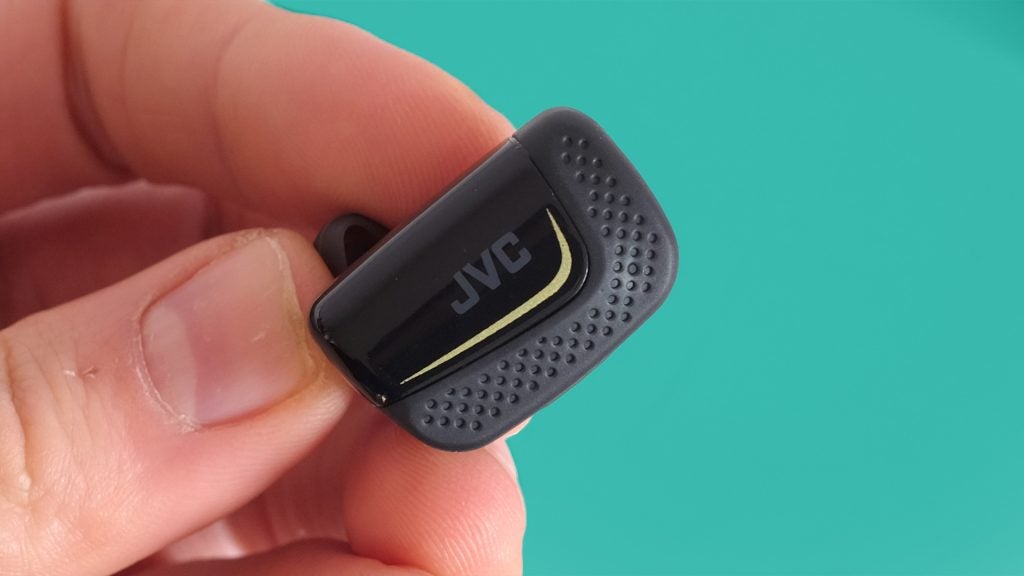 Since these are sporty earphones, they also have a silicone ear hook designed to keep them in place as you run. These aren’t the most secure of hooks I’ve used in the past year,  but I’ve had no problems running with them in. The JVC HA-ET90BT simply aren’t heavy enough to pick up the momentum to start working their way out of your ears.

JVC includes several different tips and hooks in the box. The two parts are separate, so it’s fine if you have huge ear holes but only small ears.

The company sent in the plainest version of the HA-ET90BT for review. They’re black with just a thin silver swipe down one side. They’re also available in luminous yellow, if you’re after something more eye-catching. 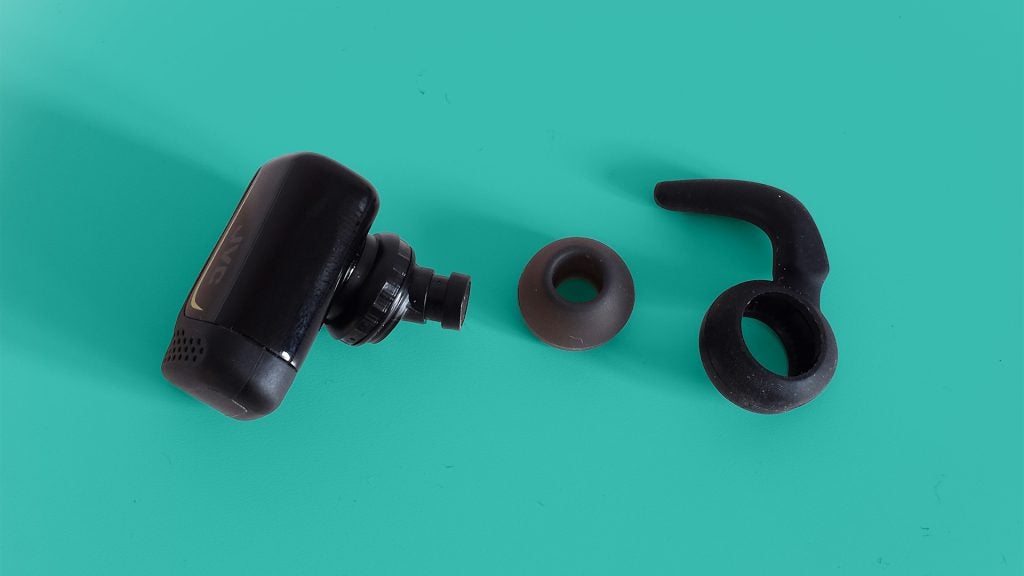 One common complaint about early true wireless earphones is that they often lose connection. That could be between the main earpiece and your phone, or between the two earpieces.

The JVC HA-ET90BT are pretty solid when it comes to signal reliability. I haven’t experienced a loss in connection even once. The handful of times there’s been a signal blip between the two earpieces, it’s manifested as a millisecond cut in volume in one ear, followed by a quick rise back up.

These earphones’ wireless may not be quite as good as the Sony WF-1000X, but they’re not far off. 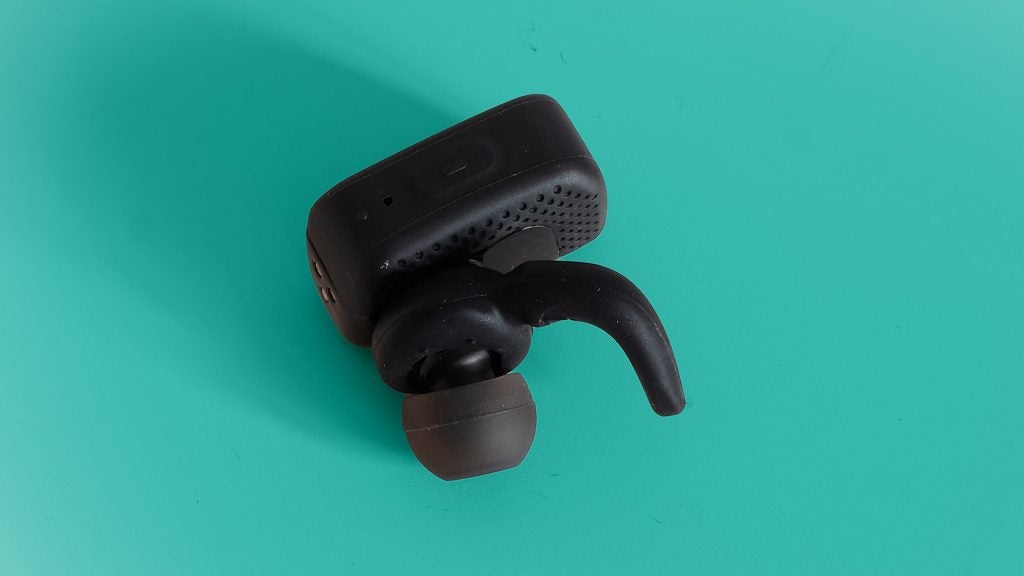 Unlike some true wireless earphones, you can control music using a button on the earpiece. This small click panel on the back of each bud is used primarily as a power button, but it will also play/pause music.

Typical of a true wireless earphone, the JVC HA-ET90BT’s battery life is poor. You’ll get around 2.5 hours from a charge. There’s no way to get an accurate read on the battery as you listen. But you’ll hear a beep prompt every two minutes or so as a warning as you get to the last fistful of minutes of play time.

A JVC Headphones Manager app lets you view the battery level and apply some EQ, although in my experience it sometimes refused to connect.

To recharge the JVC HA-ET90BT you just put them in their charge case, which is one of the earphones’ stronger points. It’s a small plastic box that will fit in a pocket. 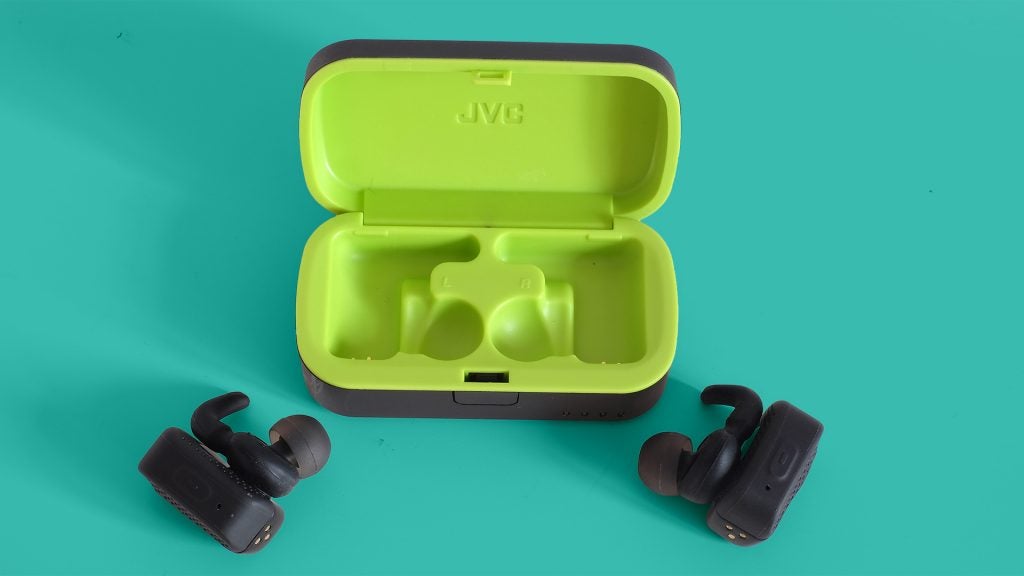 The earpieces slot into moulded plastic slots in the case, fitted with metal contacts that hook up to corresponding ones on the earphones. Fitting them is easy enough, and there’s a little clasp on the front to keep the charge case locked should you want to stash it in a bag. It’s great.

A four-LED display on the front makes you aware of how much battery is left in the case. It has enough juice for two full charges. When empty, simply plug it in with a micro-USB cable.

The JVC HA-ET90BT cover the practical basics of the true wireless earphones well enough: they work and they stay in your ears.

Sound quality is only fair rather than great, however, which is an issue now that there are so many alternatives in this space.

Issues include a tendency towards mild sibilance, a generally slightly reedy tone, and a lack of refinement in the upper-mids and treble. They aren’t a great fit for exercise. I tend to like a little more low bass when running, and the JVC HA-ET90BT have a relatively reserved low-end. They just don’t display much power or punch.

You can improve this by using the JVC Headphones Manager app, though. The “Bass” profile makes the sound more fun. 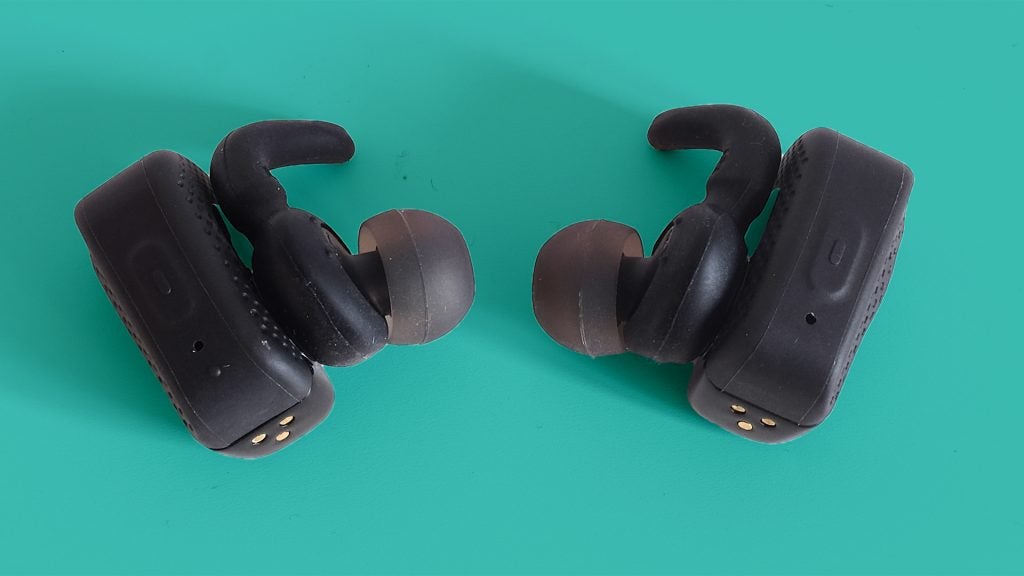 Some of my favourite earphones have a sound signature that isn’t miles away from the JVC HA-ET90BT’s, but here it serves to highlight the slight issues with the sound. They’re not masters of refinement and detail is just okay. Spatial detail and dynamics, in particular, are limited.

The result is audio that’s a little flat, and can be fatiguing after a while. And it isn’t quite as rich or smooth-sounding as I’d like. However, I’ve heard a number of significantly worse-sounding true wireless earphones.

Compared to a key mid-price rival, the Jam Ultra, the JVC HA-ET90BT are cleaner and clearer. But they also sound smaller, less powerful and less full. There’s less volume available as well, which may be an issue if you like your music played loud. I’ve used these earphones maxed-out, which is a rarity. 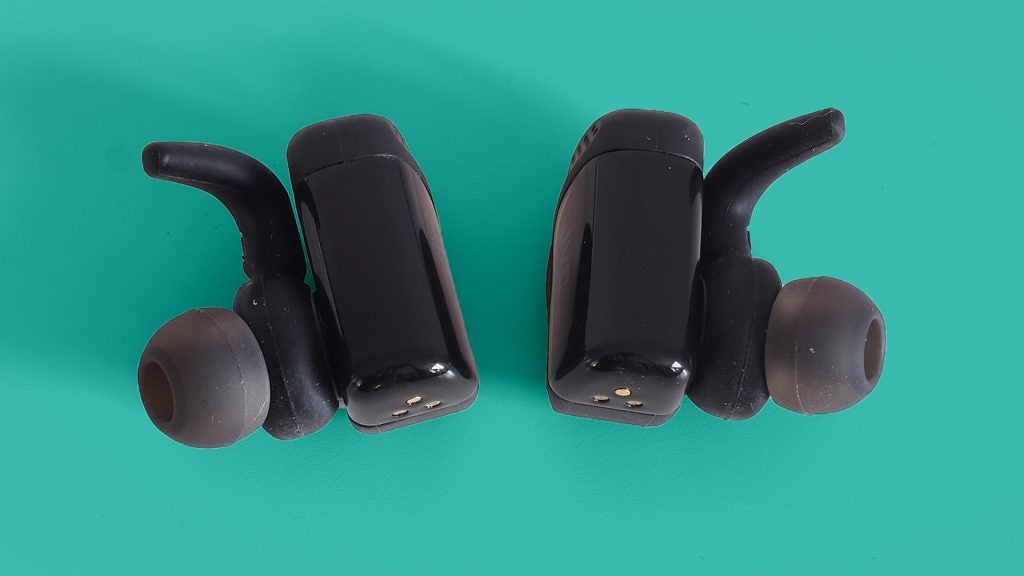 If you’re willing to spend a little more then you can get a significant sound upgrade over the JVC HA-ET90BT – these earphones aren’t as good as the Jabra Elite Sport or the Sony WF-1000X.

Also, make sure you’re aware of the battery limitations of this sort of earphone. Use them at work or on a long train journey and you’ll have to recharge them mid-session. You can’t do this while listening, either.

However, solid enough wireless and fair sound quality make the JVC HA-ET90BT a decent buy if you find them at the right price.

The JVC HA-ET90BT offer a solid fit and a neat carry case – but we’d prefer a more rich, powerful sound.