JVC might have been ahead of the 3D projection curve with its X3, X7 and X9 models last year, but it’s fair to say the brand has a heck of a lot more 3D competition to worry about as we trundle into 2012.

Just as well, then, that JVC’s new entry-level X30 model gets off to a great start right away with its price and its build quality. Its sub-£3k price is startlingly low for a projector boasting the sort of spec we’re about to get into in a moment, while the projector’s surprisingly attractive chassis is remarkably, reassuringly large – and heavy – for an entry-level machine. Basically it’s a brilliantly serious-looking bit of home cinema kit which looks like it should cost thousands of pounds more. In fact, the much more expensive X70 and X90 models we’ll be looking at in the coming weeks look pretty much the same, and do indeed cost thousands of pounds more.

Turning to the inner specifications we mentioned, the most important ones are a full HD resolution JVC D-ILA chipset, active 3D playback (two pairs of glasses and an external transmitter are included), and a native contrast ratio of 50,000:1. 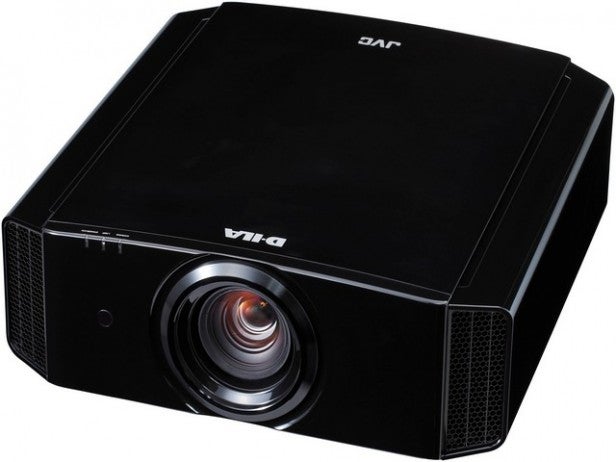 A key word back there is ‘native’. For while other digital projectors might boast similarly high or even much higher contrast ratio figures, those figures will almost always have been derived via dynamic iris systems that continually adjust the amount of light emerging from the lens. With the X30, the 50,000:1 figure is genuinely down to the light-handling precision of its LCOS-based optical engine, with no continual ‘manipulation’ of the image’s brightness required.

This matters because it should enable the X30’s image to be more stable and rich, as well as allowing it to produce deep black colours without having to compromise the overall image brightness.

Looking further down the X30’s spec sheet, it also, oddly, enjoys slightly more claimed brightness than the X70 and X90. There’s 2D to 3D conversion available too if that tickles your fancy, as well as adjustments for the parallax and intensity (depth) of the 3D experience, and a Clear Motion Drive processing system for reducing judder from the image and/or making the image look more like a ‘celluloid’ experience.

Serious movie fans with ‘cinemascope’ screens will also be happy to hear that JVC has added a ‘lens memory’ feature to the X30, which allows the projector to remember different zoom/focus settings to suit different aspect ratio material. This system can be used in 3D mode too, unlike the lens memory of Panasonic’s AT5000E. 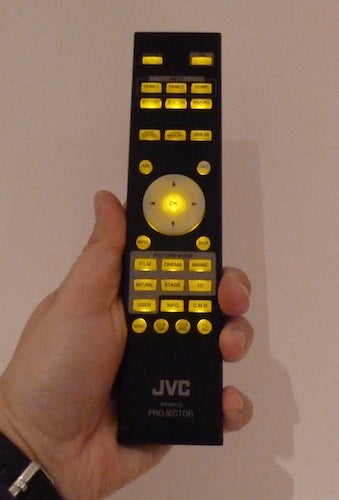 JVC claims to have improved the X30’s active 3D performance versus its X3 predecessor, at least where crosstalk is concerned. If this proves true it will be great news indeed.

The X30’s connections are pretty much in line with expectations, with highlights of two v1.4 HDMIs, a 12V trigger port, an RS-232C control port, the 3D sync port where you attach the external transmitter, and new for this year, a LAN port as another system integration option. The only disappointment is that JVC continues to exclude a D-Sub PC port from its entry-level projectors.

While setting the X30 up, though, aside perhaps from the PC port, we didn’t in truth feel as if we were short of anything earth-shatteringly important given the X30’s entry-level status. In fact, the large x2 optical zoom and the precision and effectiveness of the motorised zoom/focus/image shift systems made basic set up an absolute breeze. Plus there’s enough flexibility in provided tools like a series of gamma presets (including separate ones for 3D and 2D), separate detail enhance and sharpness settings, and a pixel-adjust system to get pictures more or less as you like them.

There are also various colour presets and a trio of different noise reduction systems – though we wouldn’t advise that you use any of these NR systems while watching HD.

The only problems we encountered during setup were that the onscreen menus are a bit drab, and contain some rather technical terms that are barely explained at all in the instructions manual. With JVC’s claims to have improved its 3D performance for the X30 ringing in our ears, we dutifully fed the projector a trio of 3D movies (Thor, Tangled and, of course, Avatar). And it was quickly clear that JVC has been as good as its word. 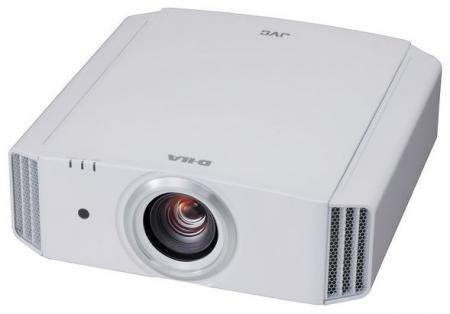 For where last year’s X series projectors suffered a little with crosstalk, so long as you make sure the projector is set to its 3D picture mode, there’s hardly any crosstalk at all to be seen on the X30. Even during the most crosstalk-inducing sequences there’s only the absolute tiniest amount of ghosting – a fact which lets you really appreciate the exceptional clarity and detail of the full HD 3D images available from our 3D Blu-ray movies.

The X30’s 3D images are reasonably bright for active technology too, ensuring that colours look punchy and realistic, and that dark areas have a healthy amount of the sort of shadow detailing that’s so important to retaining a sense of 3D depth during dark scenes. There’s always room for a bit more brightness in future D-ILA iterations, but the X30’s 3D images certainly look dynamic enough to be watchable without any fatigue setting in.

With motion also looking clean and credible without using the motion processing system (it doesn’t actually work in 3D mode), the only negative things we can say about the X30B’s 3D pictures given the projector’s price are that a) the projector doesn’t automatically shift its picture settings into 3D mode when a 3D signal is detected and b) JVC’s new 3D glasses are pretty uninspiring.

The glasses are lighter than last year’s models, but they feel a little tight on the nose, and the lens section seems narrower, so they don’t take over your entire field of vision as much as we’d like.

With the 3D hurdle mostly very successfully negotiated, though, it’s no surprise based on past experience to find things plain sailing for the rest of the X30B’s tests. In fact, as with so many entry-level JVC projectors before it, its 2D pictures are nothing short of sensational for its money.

As usual with JVC’s D-ILA tech, the 2D highlight is the black level response. Dark scenes look outstanding, with rich, deep, natural black colours sitting right alongside bright whites and vibrant colours. And don’t forget that since the X30’s extreme contrast is achieved natively, with no dynamic iris, dark scenes look totally stable, with no brightness ‘jumping’ or flickering. There’s also no sudden leap in brightness when what you’re watching transitions from a dark to a light scene.

During such bright scenes, colours are exceptionally vibrant and natural, making the lack of a CMS easier to bear (if still unfortunate). Greens look particularly good and well balanced for this level of the market. 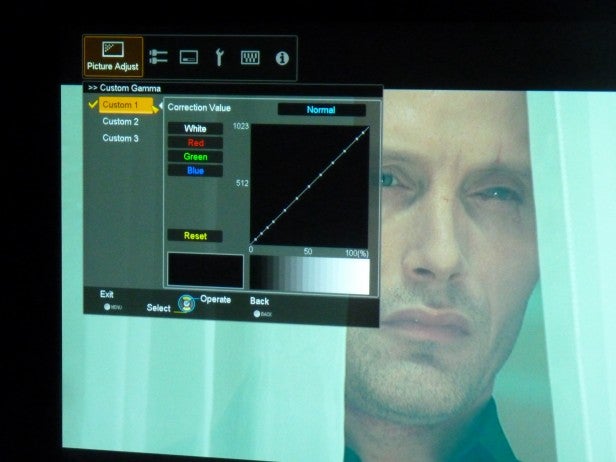 Skin tones can look just a fraction orangey using the projector’s factory settings, if we were being really picky. But this is a minor point overall; JVC, it seems, is certainly getting better at setting things up well in the factory before it even ships its projectors out.

The leap in brightness delivered by the X3 last year pays similar dividends on the X30 in 2D mode, making its images look every bit as dynamic as those of rival models in the same price bracket – overcoming what was once almost the only flaw in JVC’s D-ILA projection make up.

Another really impressive thing about the X30’s pictures is how flexible they are. For even without a full colour management system there are enough options and enough range within those options to ensure that almost all image tastes or preferences can be catered for. Even the Clear Motion Drive system is worth more experimentation than most similar systems – especially the two ‘black frame insertion’ modes, which do a quite nifty job of recreating the sense that you’re watching celluloid at a commercial cinema.

With the X30 also hugely impressing with how quietly it runs, even when showing 3D, there are only a couple more small problems to note on top of the puny issues already noted. First, it seems odd to us that there’s no Game preset. And second, our sample exhibited some curious ‘pulsing’ noise over mid shades of grey while using some of the image presets – especially the ‘Natural’ one.

But even if it turns out this isn’t a problem specific to our test sample, it’s easily avoidable by sticking to, say, the film or cinema presets. And anyway, you can only really see it with ‘pure’ blocks of greyness such as those found in the menus of Call of Duty: MW3; it’s hardly ever noticeable over normal video footage.

But for heaven’s sake, don’t let this any of this pathetic last-minute whinging get to you. The X30 is overall a bigger step forward from the X3 then we’d expected, which means pretty much by default that it’s the finest projector in its class.

Verdict
Well, whaddya know: with the X30 JVC has yet again set the bar for projection quality in the £3,000 projector class. It might almost be boring if the projector wasn’t so darn brilliant.