JVC has taken on the challenge of the pocket Internet camcorder in a much more serious way than other big-name manufacturers. The PICSIO GC-FM2 brought a dollop of quality and some novel features into the genre, and won our favour as the best attempt yet at out-flipping the Flip. Now, the PICSIO GC-WP10A introduces something unique. This is the first pocket Internet camcorder you can use underwater.

The WP10A is waterproof to a depth of 3m, so will be perfectly safe in a swimming pool – if you’re allowed to use it – or for shooting fish in the shallows by the beach, or your own tropical tank. However, the door covering the A/V ports is only kept shut by a catch, which we found a little too easy to open. It’s far less secure than the tightly locking catches on Panasonic’s underwater camcorders, such as the SDR-SW21. When closed, the door keeps its seal well, but it’s potentially possible to knock it in the wrong place. This will only happen if you’re not careful, though. 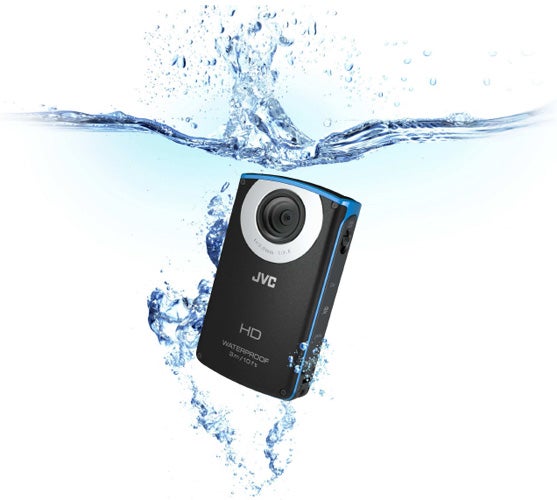 The WP10A is otherwise very similar in specification to the FM2. Inside is a healthily sizeable 1/3.2in CMOS sensor with 5.13-megapixels. Although the top video format is Full HD at 1,920 x 1,080, the entire resolution of the sensor only comes into play when shooting stills, which can be captured at 2,592 x 1,944, or 1,920 x 1,440. Like the FM2, there are many different video recording modes available. Alongside the top Full HD option, which records at 25 frames/sec, there’s a 720p alternative, which runs at 50 frames/sec for smoother motion. There are also two versions of 960 x 540 (one quarter of Full HD). The iFrame version is designed to be compatible with Apple iMovie, whilst the QHD version is more PC oriented. 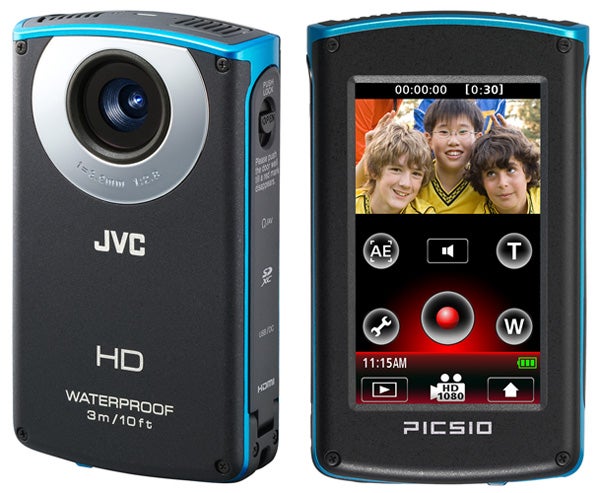 There are time-lapse options as well, allowing you to grab a frame every half, five or 40 seconds. These are then stitched together to create a movie. However, you will be constrained by the battery life, unless you add an external power supply. This will require having the waterproof door open, and JVC doesn’t include a separate supply in the box as the unit uses a standard mini-USB 2.0 connection, so recharges when attached to your PC.


The WP10A doesn’t have any memory on board, instead requiring removable SD media. The top video data rate is around 12.5Mbits/sec, so an 8GB card will be enough for approximately 1.5 hours of footage. But there’s support for SDXC as well, allowing you to use cards up to 64GB in size. 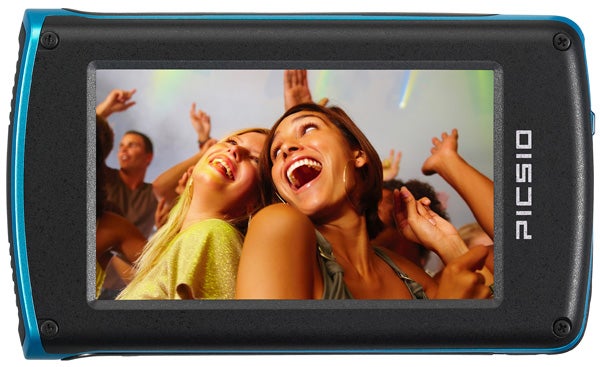 The FM2’s chief innovation is carried forward, too. The main controls are operated through a 3in touchscreen, although there aren’t that many of them, as to be expected in a camcorder in this class. You can control the 4x zoom, although this is only digital so reduces image quality when used. You can also add a small selection of video effects, such as black and white, posterisation and sepia tone. There’s a wind cut filter, too, although this probably won’t be very effective underwater.

There are a few extra features here, which the PICSIO GC-FM2 doesn’t offer. The WP10A has a few more discrete buttons, for switching between camera and camcorder modes, and toggling record. Most functions are operated by the touchscreen, which might prove hard to control when swimming, so these allow you to use the camcorder one-handed without the screen. The WP10A also has an audio recorder alongside the video and photography capabilities. This allows it to grab sound in MP3 format. 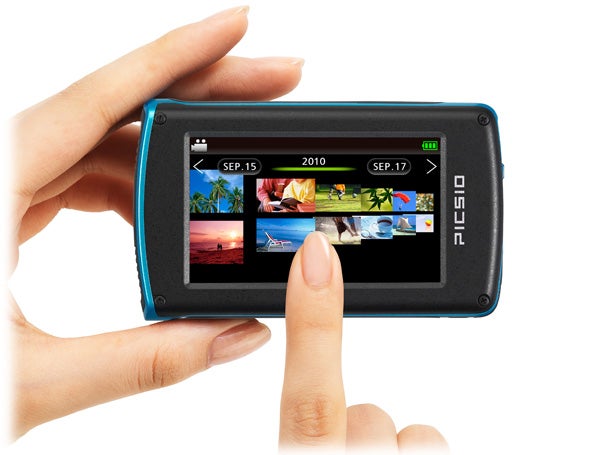 To go with the audio recording is a headphone minijack, although this lurks beneath the waterproof panel, which will get in the way somewhat during use. There’s a face detection facility with its own button as well. Although focus is fixed, the face detection will pick up human faces and set the exposure accordingly. When not in this mode, you can set exposure by touching a reference point in the frame (just like the FM2).


Part of the reason for the success of the pocket Internet camcorder so far is that most examples haven’t skimped too much on image quality, particularly in low light. A device you can easily slip in your jacket is even more likely to be used in widely varying levels of illumination, such as at rock concerts. Like the FM2, the WP10A particularly excels in darker conditions compared to most budget camcorders, thanks to its large CMOS sensor. In brighter lighting, the WP10A shows more detail than other camcorders in this class, due to its 1080p recording. Colour fidelity isn’t perfect, and neither are exposure or contrast, but overall results are good for the price. 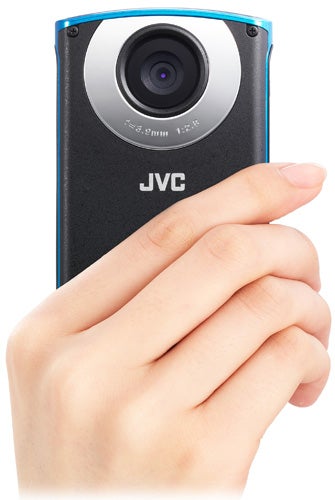 Like any self-respecting pocket Internet camcorder, the WP10A comes with editing software built into internal memory. This loads onto the host PC the first time you hook the device up. However, due to the constraints of waterproofing, there is no USB 2.0 plug integrated. Instead, a small USB cable is supplied, for the port under the waterproof flap.


The software is the same as that included with the GC-FM2. Going by the somewhat unusual name of LoiLoScope EX, this app has an interface that is equally strange. It’s nothing like other Windows apps, with a freeform approach to window layout. However, the features are relatively strong compared to other pocket Internet camcorders, with the ability to trim clips, add effects that can be customised, and string footage together with titles and a soundtrack. There’s also a comprehensive selection of video streaming websites supported, including both Facebook and Vimeo alongside the ubiquitous YouTube.


With this generation, JVC has taken the pocket Internet camcorder format and enhanced it with some of the qualities of ‘full fat’ models. The PICSIO GC-FM2 was the best example yet of the genre, but the PICSIO GC-WP10A takes the same set of features and encases them in a waterproof shell. Although the FM2 is expensive for this type of camcorder, and the WP10A is pricier still, if all you want is a point-and-shoot camcorder you can use at the beach as well as around town, JVC has a unique proposition for you.