Much was made of Apple’s new A10 Fusion processor when it was announced. It uses two low-power cores that are for doing everything not particularly taxing, such as texting. Two other, more powerful, cores take care of all the heavy lifting – 3D games and other apps that need a lot of processing chops.

It’s not a new invention. Android phones have been using this system to good effect for years, but it’s nice to see Apple taking it up now, since it tends to lead to improved battery life.

It’s not just about efficiency, though. The 7 Plus is a stonkingly fast phone – the most powerful we’ve ever tested on TrustedReviews when it comes to our standard range of benchmarks. 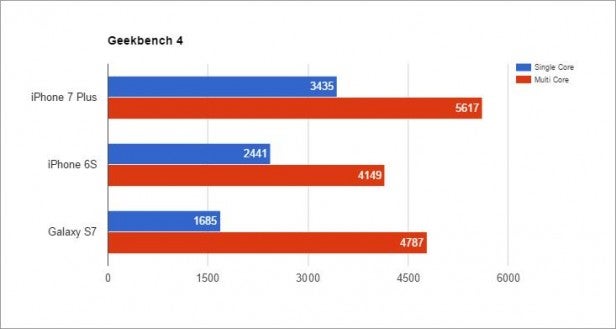 While the iPhone 7 Plus has 3GB of RAM – 1GB more than the iPhone 7 – this doesn’t affect the results. It’s on a par with the standard iPhone 7 and faster than any of the competition. It’s currently the most powerful phone you can get.

In practice this all means that it’s butter-smooth in day-to-day use. I’ve never experienced any lag or apps opening lazily. This should be a phone that performs to the highest standard for a few years to come.

Part of the speedy feel comes from the new iOS 10 operating system, which is a little snappier than before.

It’s not wildly different to previous versions, but as always Apple has refined all the most important areas to make a more comprehensive, but still easy-to-use, interface.

Some of the biggest improvements have come to Apple’s core apps. iMessage is now full of clever features and has its very own mini App Store. You can draw pictures to send to your friends, search for funny GIFs or even send people the track you’re listening to on Apple Music.

Talking of Apple Music, the streaming service is also a lot more refined. It’s catching up fast with the competition, thanks to this latest update. Photos has replicated a lot of the excellent Google Photos functionality and cleverly groups people and locations together for easy searching.

Some of the best changes have happened to the previously under-utilised lockscreen, Control Centre and Notifications. You can now directly respond to notifications from the lockscreen, and the Control Centre now has three “pages” you can swipe through for additional options such as Apple Music controls or to directly manage Homekit-compatible smart home products. Unfortunately, there’s still no shortcut to Settings.

There’s plenty more to discuss about iOS 10, from updates to Siri to the ability to, at last, get rid of those bloatware apps we had a special folder for. Yes, that’s right, you can finally delete the Stocks app.

If you want to find out everything about iOS 10, and how to use all the features to the max then read our iOS 10 review and guide.

Before I move on to the iPhone 7 Plus’s camera, though, I’d like to cover 3D Touch a little…

3D Touch was a feature first demoed on the iPhone 6S, which opens additional options when you press the screen harder. I thought it was a great idea then, but it never quite lived up to its potential. It just didn’t do very much. It does now.

For example, you can hard-press the Torch icon to offer three levels of brightness, or get travel times to your favourite locations on the third-party Google Maps. 3D Touch has finally grown up and is a unique feature you can’t get from any other company.