The iPhone 5C’s rear camera hardware is functionally identical to that of the iPhone 5. It has an 8-megapixel Sony sensor that’s 1/3.2-inch in size, resulting in 1.4-micron sensor pixels.

It’s entirely free of the headline-grabbing features seen in recent high-end phone cameras. There’s no optical image stabilisation, no oversized sensor and no super-fast lens – like the iPhone 5 it’s an f/2.4 lens. 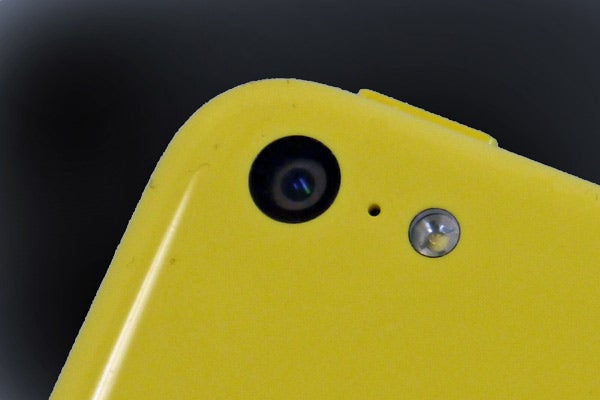 However, it remains an excellent camera for the average person. It’s quick – both in terms of the speed of focusing and the delay between shots. We recently looked at the Lumia 1020, a camera that can produce far better images, but takes longer to do so. Snaps missed because of camera processing lag are rare with an iPhone.

Let’s take a closer look at what it’s capable of, image quality-wise.

Detail and Exposure
Fate decided to offer us a particularly miserable day on which to take photos, but a grey cloudy scene is a pretty good test for a camera. It offers plenty of opportunity for it to overexpose clouds, or underexpose other elements.

However, the iPhone 5C fared well. Its exposure is even and well-judged, showing some detail in the cloud cover without making the foreground buildings appear more depressing than a weekend at a motorway service station. 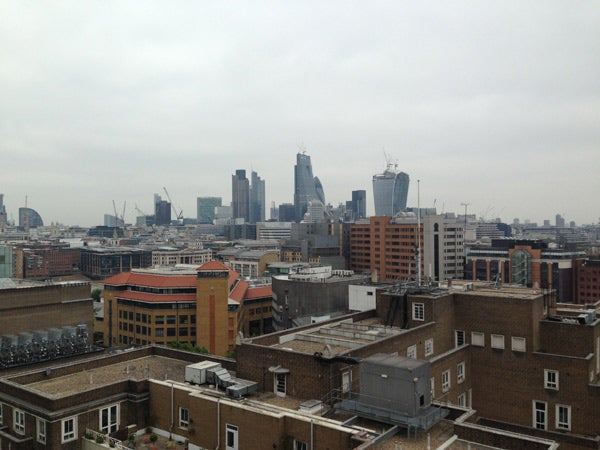 Getting right down to pixel level, the iPhone 5C camera – predictably – captured a similar level of detail to the iPhone 5. Apple does seem to have reduced its image sharpening a tiny bit with iOS 7. Compared to an iPhone 5 running iOS 7, our test image looks a tiny bit softer and a tiny bit less noisy – with slightly lower contrast. 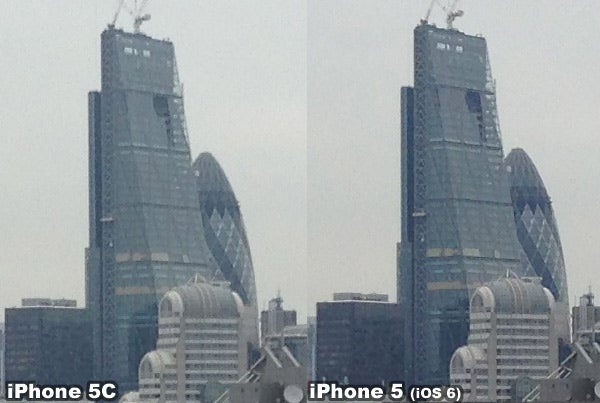 This sounds like a negative change, and that’s how it appears at pixel level. However, zoom out and the iPhone 5C’s shot looks a little more natural. The two are fundamentally very similar, though.

Low-light and Flash
With a small 1/3.2-inch sensor, the low-light capabilities of the iPhone 5C are naturally going to be quite limited.

Without using the flash, low-light shots are extremely noisy. However, as ever Apple makes the right moves when it comes to processing images to make them most usable.

The shot below – which was very gloomy in person – shows that the exposure compensation has been boosted to make use of what little light there is. However, the level of noise is still worse than you’d see in an HTC One or top-end Lumia phone like the Lumia 925 or Lumia 1020. 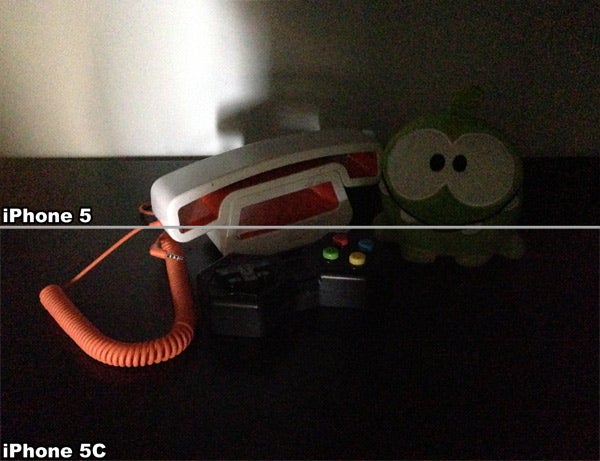 The iPhone 5C features a fairly unremarkable LED flash – it misses out on the clever dual-tone LED flash of the iPhone 5S, and the ‘vignette’ like effect shows the limits to an LED’s range and even-ness. 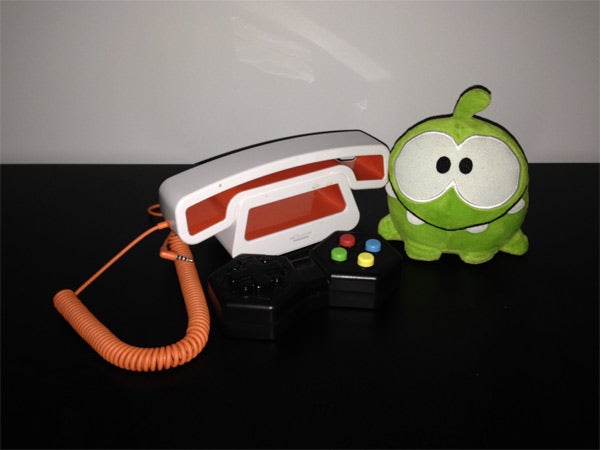 The LED flash isn’t a wonder, but we’re glad it’s there

Macro and Focusing
The iPhone 5C does not have a specific macro mode. You simply have to tap on your subject to focus and hope you’re not asking too much of the lens.

You can’t get extremely close and still have your subject in-focus, and since the iPhone 5 was launched in 2012, the 8-megapixel camera rig has been outclassed several times technically, but it’s not bad at all. Image sharpness is very good. 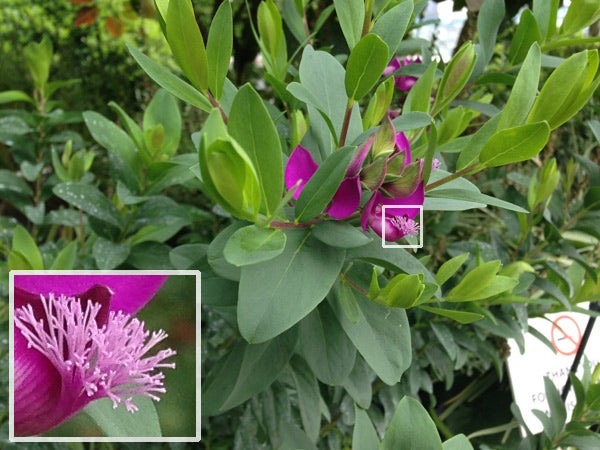 Depth of Field
Other than low-light performance, another key area that other higher-end cameras can beat the iPhone 5C is depth of field effects.

The camera can’t handle truly shallow focusing, and background areas are only somewhat blurred. With some effort you can produce shots with a somewhat shallow field, but having been spoilt with the Lumia 1020, it’s clear that the iPhone 5C isn’t close to performing at that camera’s level in this respect. The HTC One outclasses it too. 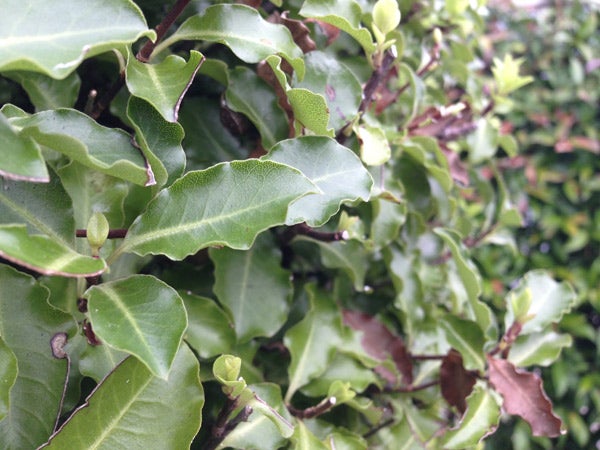 As with most mobile cameras, only relatively minor depth of field effects are possible

HDR
Like the iPhone 5, the iPhone 5C has a very good HDR mode, which merges two different exposures to reduce overexposure and increase the amount of shadow detail in your photos. As the demo below shows, it manages to reduce the slightly glum look to photos on grey days. 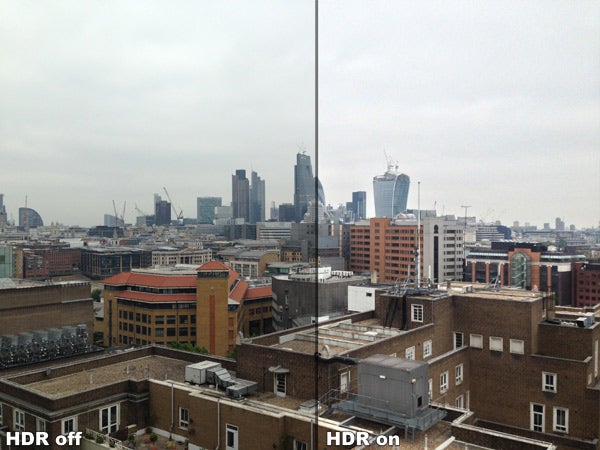 The HDR mode is strong as ever

It’s not so intense that it makes photos look entirely artificial either – a too-intense application of HDR can result in weird halo’ing around objects (which can look good in the right hands, but generally looks a bit naff.)


Video Capture
The iPhone 5C is – like the iPhone 5 – a decent video capture device. It can take 1080p videos and uses software stabilisation to avoid handheld footage looking like migraine-inducing jerk-o-vision.

iOS 7 also introduces a neat dual-capture feature. When recording video a shutter button appears, letting you take photos on the fly. Where other phones prioritise more gimmicky features like capturing front and rear camera footage at the same time, this less flashy addition seems much more useful to us.

Front Camera
The one hardware element of the iPhone 5C that does significantly improve upon the iPhone 5 is the front camera. It has a 1.2-megapixel camera – just like the last iPhone – but the sensor is slightly larger. 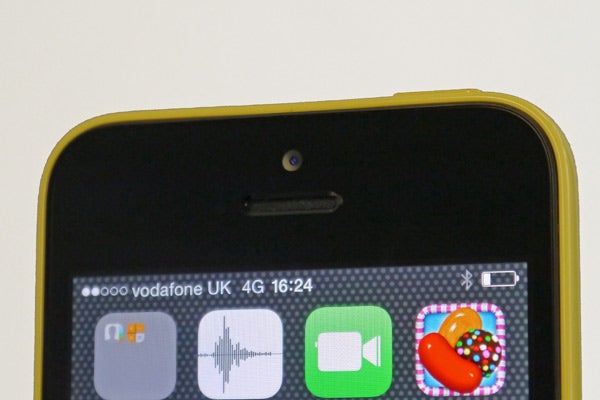 We wouldn’t extend to using it for portraits to print out, but it is an above-average video chat camera. It is particularly effective at dealing with bright light sources. Where a lesser front camera tend to show a smeared halo around lights, the iPhone 5C keeps things looking as they should – crisp and clean.